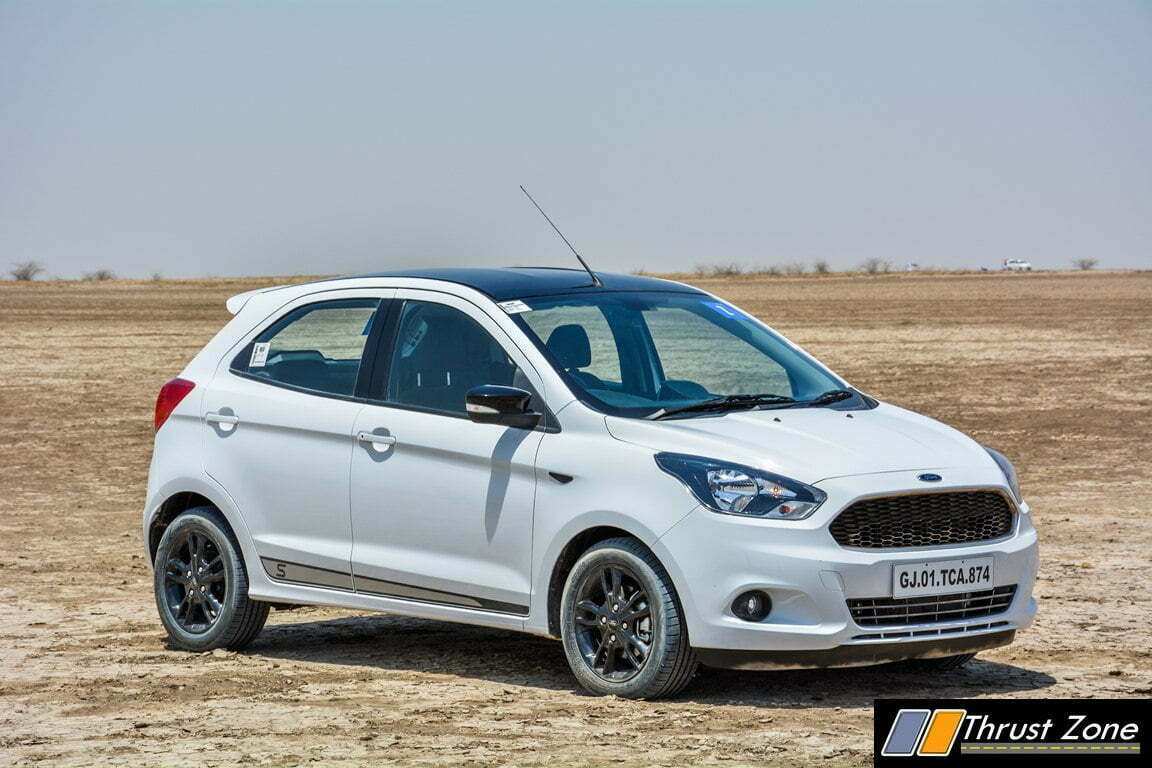 Ford is in the country since the year 1995. The manufacturer has completed 20 years and above and has given every type of car owner something to look forward too. The manufacturer gave us affordable hatches, premium sedans, mid size sedans and sporty vehicles as well. The Fiesta, the Mondeo, The highly acclaimed S variant and of course the SUV segment which now has the excellent Endeavour. However, we go back today to the Figo which has been bringing volumes to the manufacturer and with the second generation launch of the cars in 2015.

The manufacturer has done the same with the Aspire as well as the hatch. Both cars get a Titanium variant which is loaded with essential, safety and convenience features. Along with this, it has also got mechanical updates to the chassis. The Figo S, and the S stands for sport has just been launched and we have a through first ride report as we spend almost 300 kms with the car driving in the city, highway and took it to the salt pans and gave it the full throttle it deserves. How Sporty is the Figo S? Let’s find out. 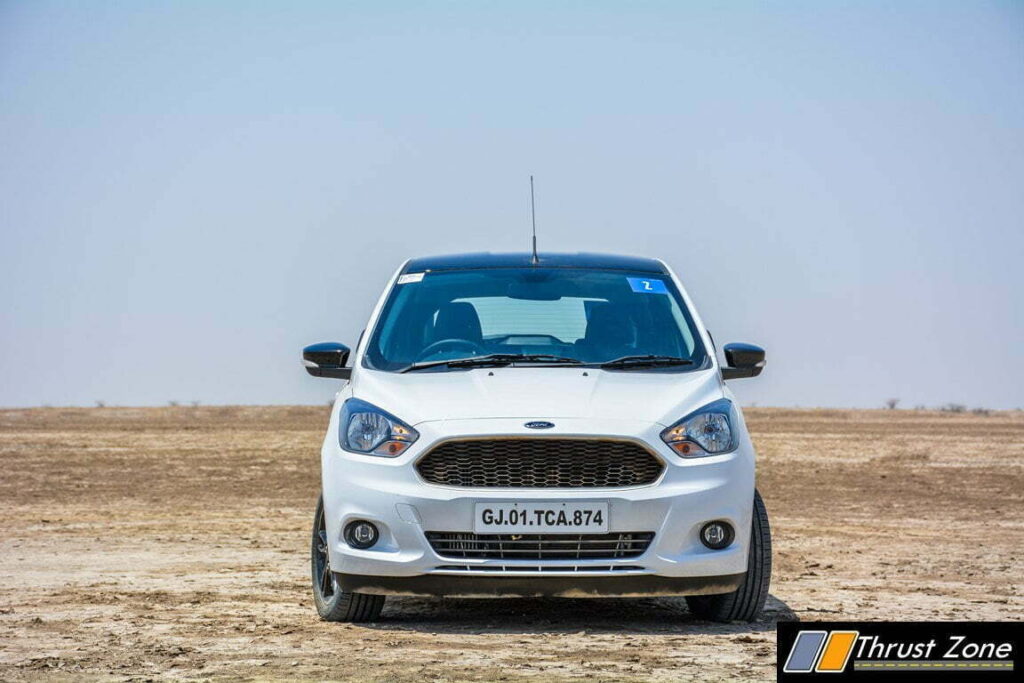 Design
Figo as a hatchback always looked a bit racier, but with subtle color options it did not exactly show its true nature. With the black wheels, stickers on the bumpers, below the doors, a revised bumper and a new grille which is a honey comb unit is offered instead of the chrome grille. The black scheme with the white body does make the car look sportier and let’s not forget the boy racer inspired, well done roof spoiler at the rear which is form and function. Overall, our test car looked pretty impressive but it will look better with more dark paint options and dual tone roof on offer. 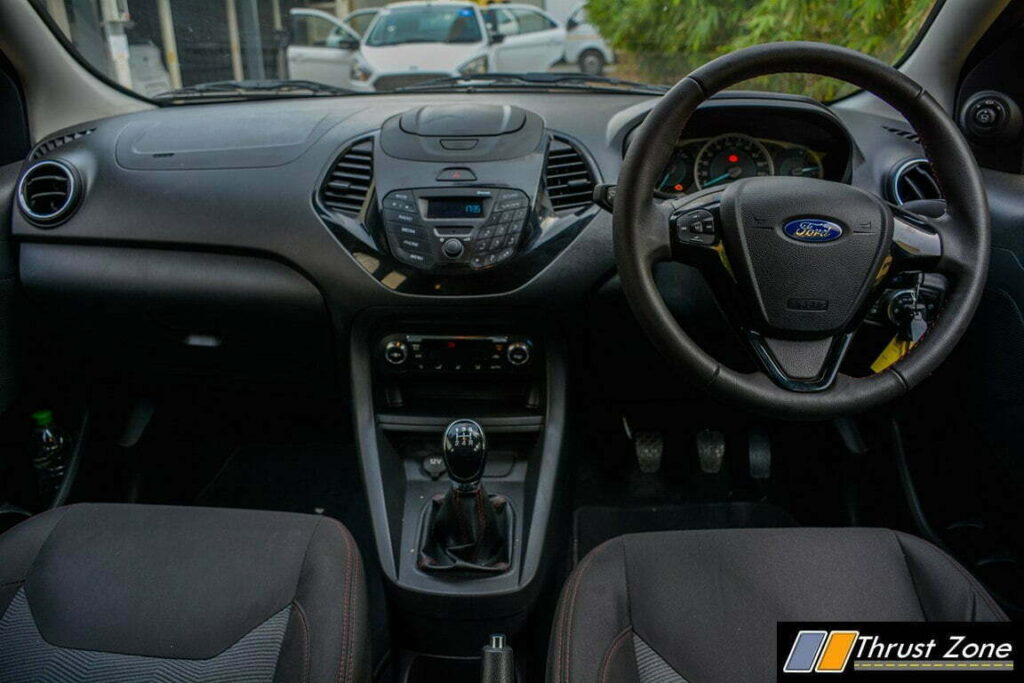 Interior
Interior is now an all black theme. The steering, gear knob, seats, handbrake have red stitching to make sure it feels and looks more racier. The piano black accents on the steering, the good to touch and feel buttons do their job. The infotainment is the same Sync system with a small screen and most of the job is done with the same. Titanium plus has a large screen, but that isn’t a touch either. Here it gets phone dock to display, for example navigation and anything else you choose to do so. 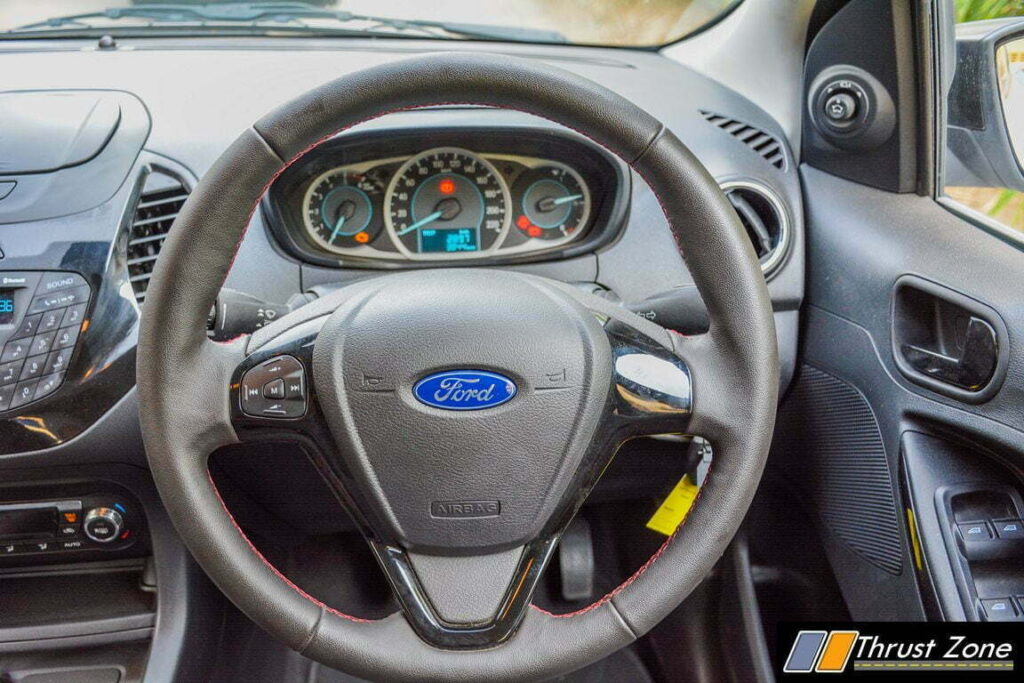 Feature list is standard Titanium features so it gets six airbags, connectivity options, fully electric ORVM’s, climate control, and steering mounted controls. Space in the cabin continues to be excellent with 22 storage bins. A lot of legroom is on offer but should and headroom can be slightly tight for taller passengers. Under thigh sport is good and aids well in comfort. Boot space is good as well and is one of the largest in the segment. Quality and fit-finish is good all around too. Sound system as before is excellent in the Figo with good bass on offer. 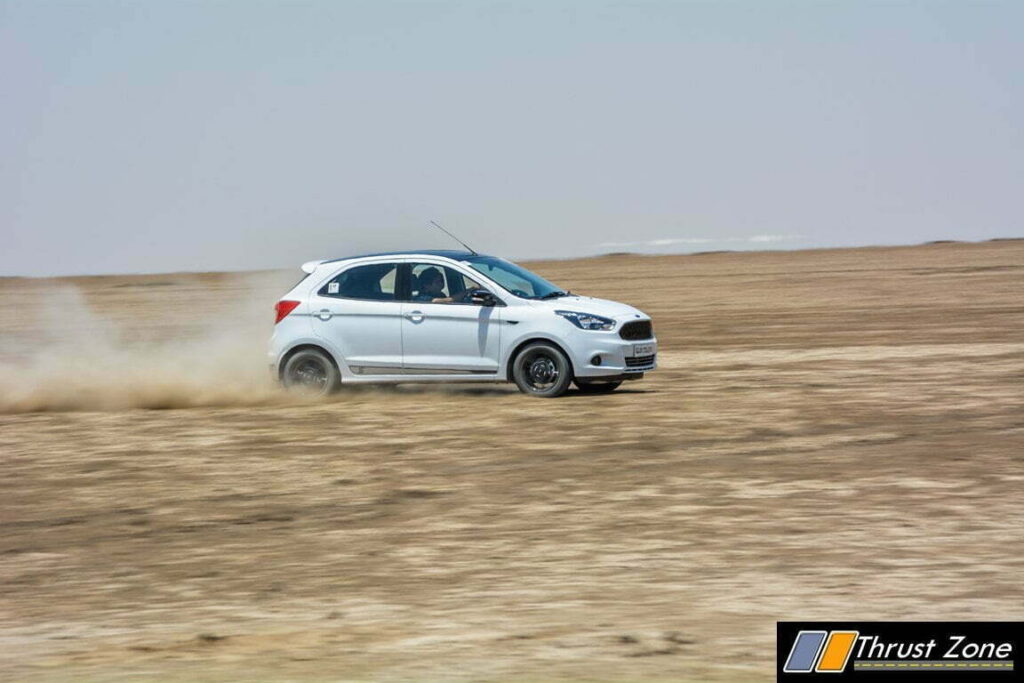 Performance too is identical as before. We had the diesel engine on test which is the 1.5 litre 100 PS engine that makes 215 Nm of torque. The motor is free revving, smooth and refined. NVH levels from engine are kept far away. The road noise is also kept at bay but the tyre noise dose creep in a bit. You only hear a bit of all if you don’t have the sound system on. There is a bit of turbo lag but despite that driveability is good, mid-range and top-end power comes by the bucket loads. 5-speed manual gearbox is smooth, has a bit of a tall throw. Clutch is light but has a long throw that takes time getting used to. Figo has the most powerful diesel engine on offer today and the real world performance is just spot on and is the highlight of the package. 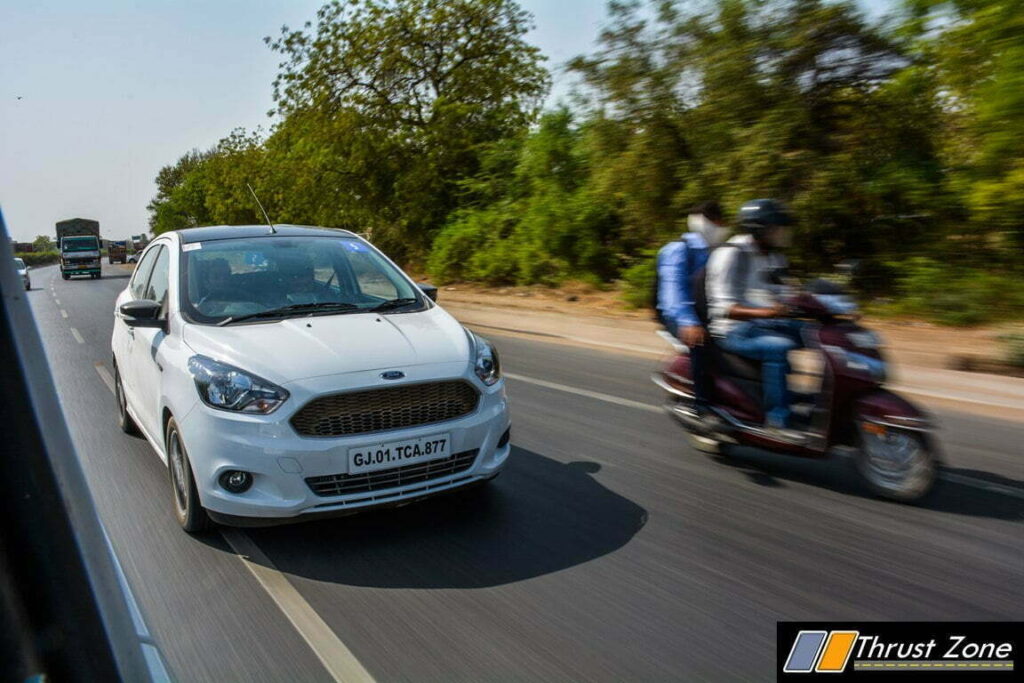 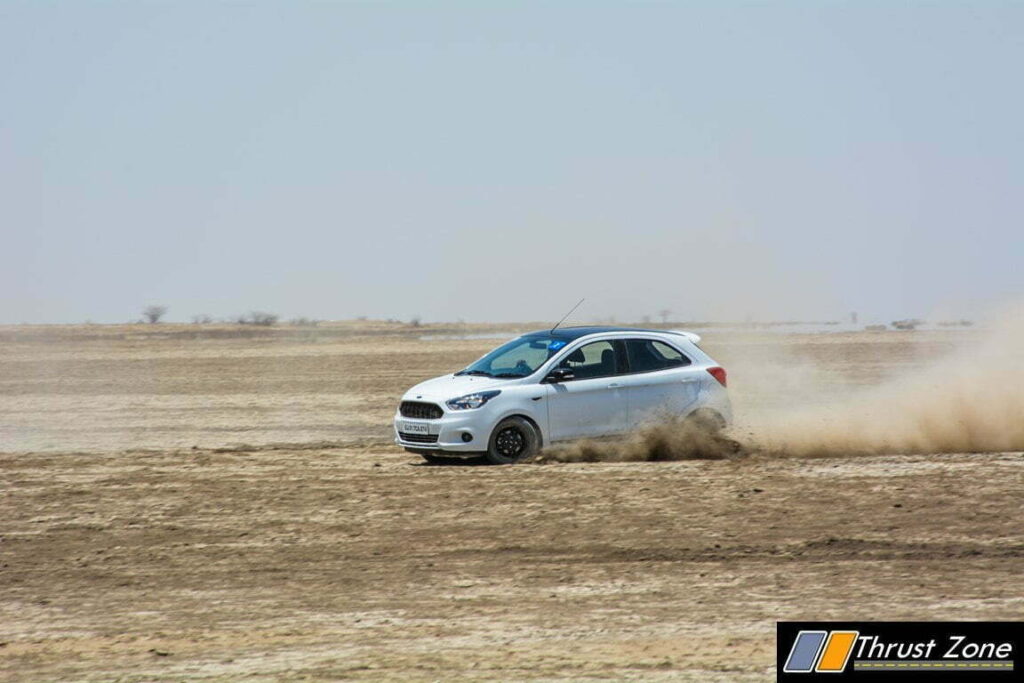 Dynamics is major highlight of the Figo S. The suspension has been stiffened and the only thing has been done is the change in spring rate. It is far more stiffer than before in all four corners. The damping is identical as before which is quite taut. Body control is well in check, you get the push sensation from the front wheels and if you push it harder, you can sense the rear wheel lifting. 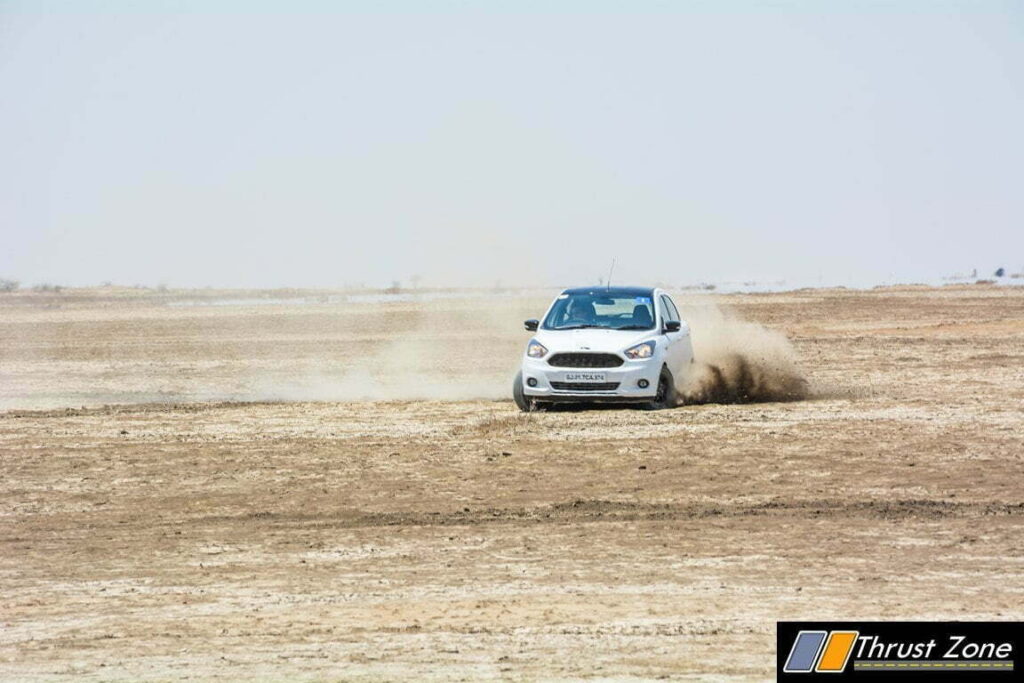 This has been done to provide less understeer, more safe and predictable dynamics and is far more better riding package than before as ride quality continues to be compliant despite the stiffer suspension. This is the exact setup we hoped in the beginning, but since its here now, we are not complaining and welcoming this move whole heartedly. Steering is well connected, precise and gives feedback, which is bit low in amount. It would be great if the steering weighted a bit higher at expressway speeds. Brakes are good with excellent bite and a lot more progressive power. 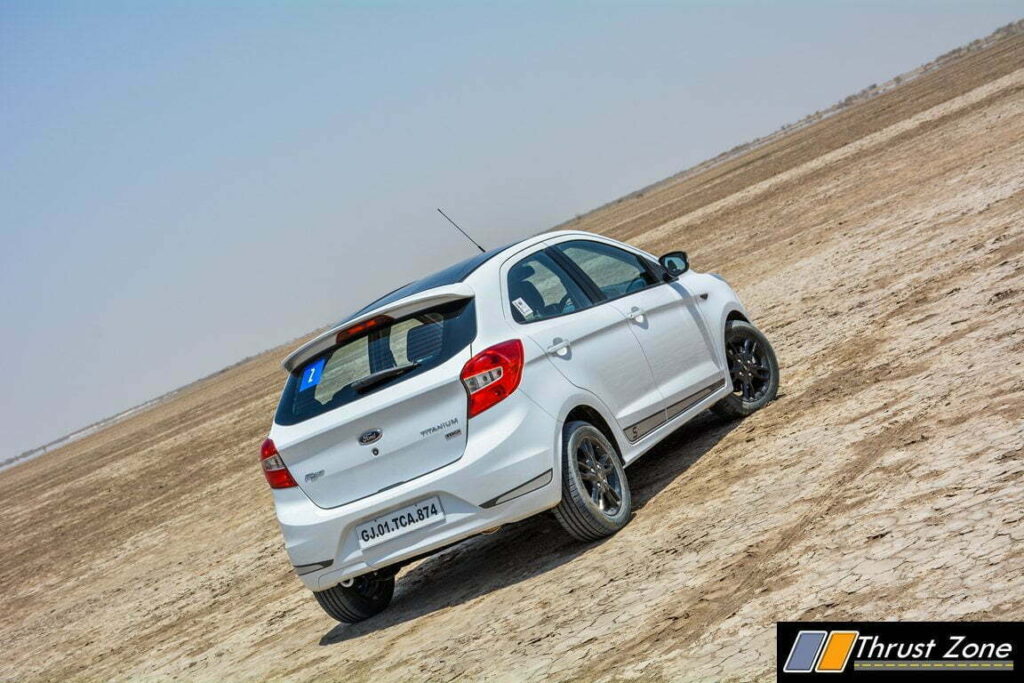 The Figo S then has nothing to worry about. It is the best hatch in its segment with segment leading powertrains on offer, a spacious cabin, with subtle amount of features and great build quality and safety credential on offer. The car now gets more sportier which was the need of the day and Ford has done and it is great to see the manufacturer taking the initiative to do so. The car looks racier and continues to promise very affordable maintenance costs and a price tag which already offers a lot of value for your money. 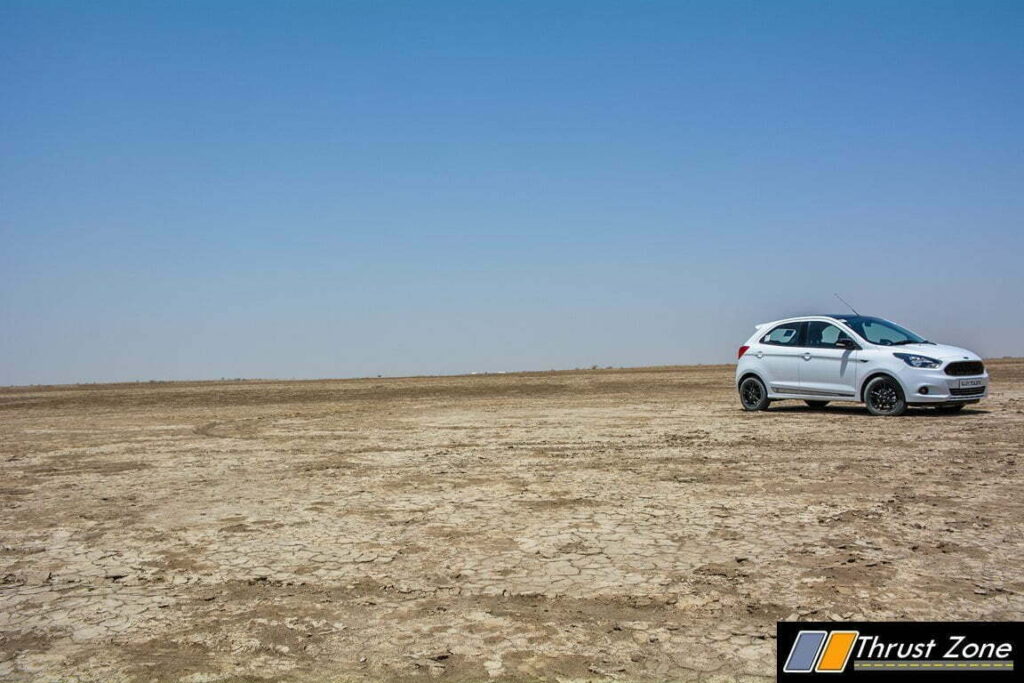 This variant can bring the enthusiast back to showrooms and the other consumers can also expect some exclusivity with this product as well if the are planning to get one. In the mundane world of hatchbacks, Ford is sticking to its guns and offering more bang for buck at the same time, The Figo S is clearly a double whammy for Ford and its prospective buyers, both of them!

This Blue and Black Wrapped Dominar 400 Deserves Your Attention Because It Looks COOL!