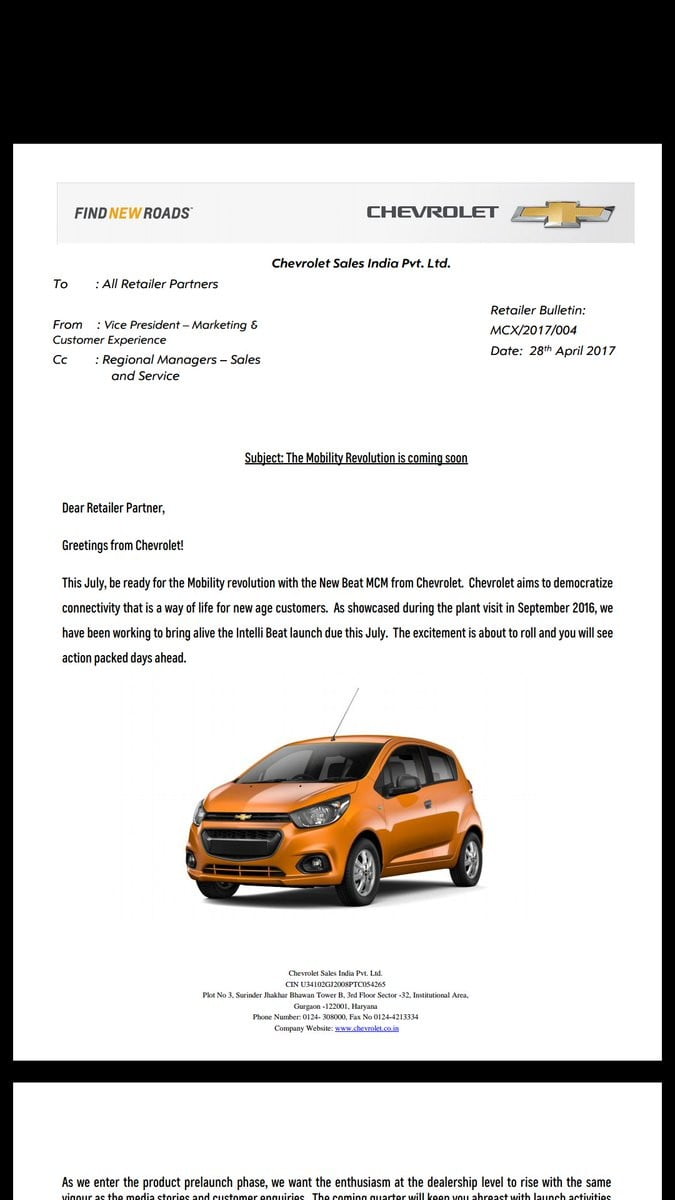 Chevrolet Beat came in 2010 and helped GM set up some base in the market. It helped it get a minute amount of market share in the B+ segment hatchback. The car had a funky design language, a great value for money price tag along with a very refined and efficient petrol motor. Diesel came in the year 2013 and boosted the sales as much as it could for GM. The sales still continue to be best in the GM stable till date.

Now, GM has decided to give it an evolutionary change. The car was showcased the Auto Expo 2016 and again later in a preview. Images are out and spy shots have started pouring in. We have more details on the car as well. The Beat has been spied once again somewhere in Delhi. Our reader sends us these pictures of the car running around the streets. The hatchback continues testing but this time it has been revealed completely.

Engine wise, The 1.2l petrol engine will be ditched. The four-pot motor will be replaced with the 3-cylinder 1.0 litre petrol. The power and torque numbers will stay the same though. Cutting down one cylinder means more punch in lower rev-range along with better fuel efficiency. Beat is known for its silent motor and the 3-cylinder should carry the same trait as well. The same configuration will be seen for the diesel.

1.0 3-cylinder diesel engine, which is basically the Multijet Fiat engine that Chevrolet helped build and develop will make it to car like before. The engine should make more power and torque as well than before. Petrol should deliver 20 km/l and diesel should deliver 25-26 km/l. Both motors will come with 5-speed manual gearbox. Petrol can get an automatic at an later stage.

On the outside, the design and dimensions will remain similar then before. What we get in India is the new front fascia with larger grille, chunkier bumpers. Rear has a new tail-gate, with new tail lamps and bumper design. Side profile stays identical as before. Rear door handle is mounted above, a unique feature that stays with the car. New alloy wheels will make it to the car to make things interesting when it comes to the side profile.

Expect the same good quality interior with the car. The dashboard will witness a change and the meters will be different this time. Expect steering mounted controls, connectivity options such as USB, AUX, Bluetooth and SD Card. Automatic climate control, electronically adjustable mirrors and other things will be seen in the car. Reports suggests that the Beat is set to get new beige interiors and redesigned dashboard and more equipment than the last generation car.

All the variants of the new Beat will get ABS and EBD along with dual airbags as the new government law makes it compulsory.

BMW G310R Spotted Testing In India For The First Time