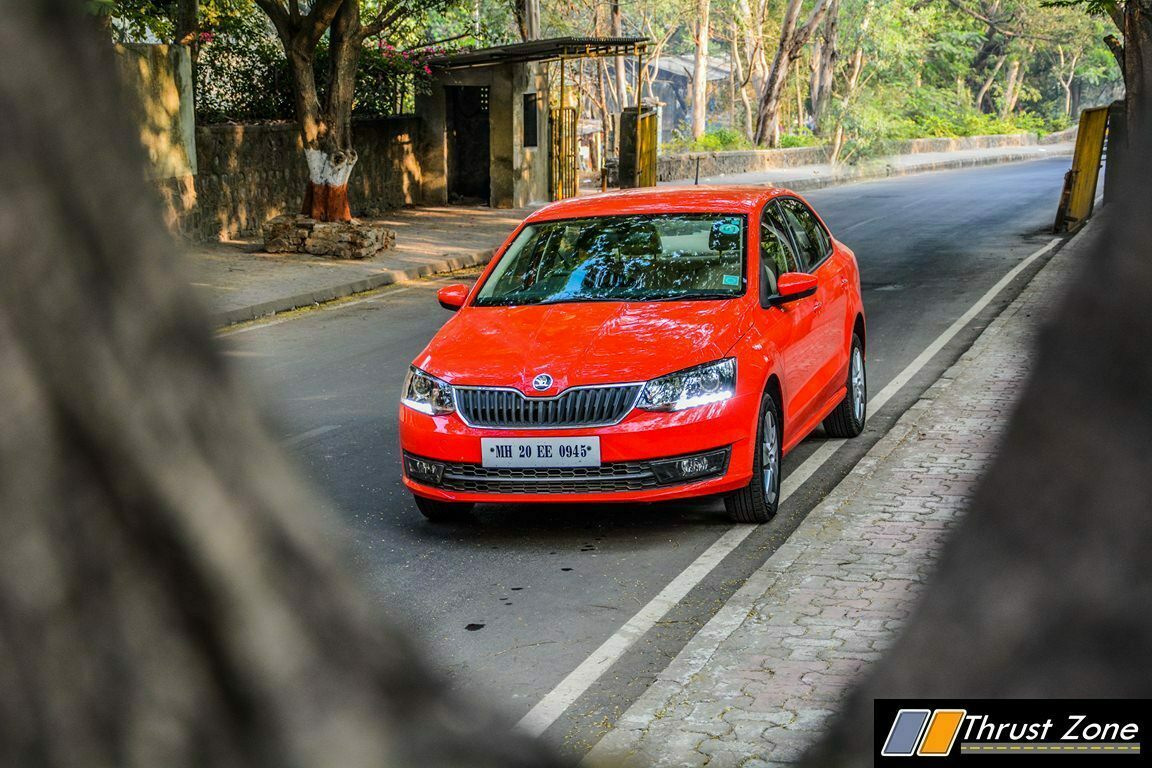 The C-Segment sedan space is know the most buzzing space in the Indian car market. Despite the barrage of sub four meter sedans have come in, the C-segment hasn’t lost its charm. The proper three box sedan with a length that is just around 4.5 meter is still ideal for our road conditions. The cars seems to fit almost everywhere and they offer right blend of performance and as well hatchback related numbers in terms of economy.

However, there have been cars in the segment that offered everything expect a few traits not seen anywhere else except than their European rivals. The Volkswagen Vento started this by offering German build c-segment car and then later the Skoda Rapid followed. The Rapid ended up being more popular for some reason despite the fact that the sales were equal at times. All of this despite the fact that the Rapid’s brand, hasn’t had a clean past. 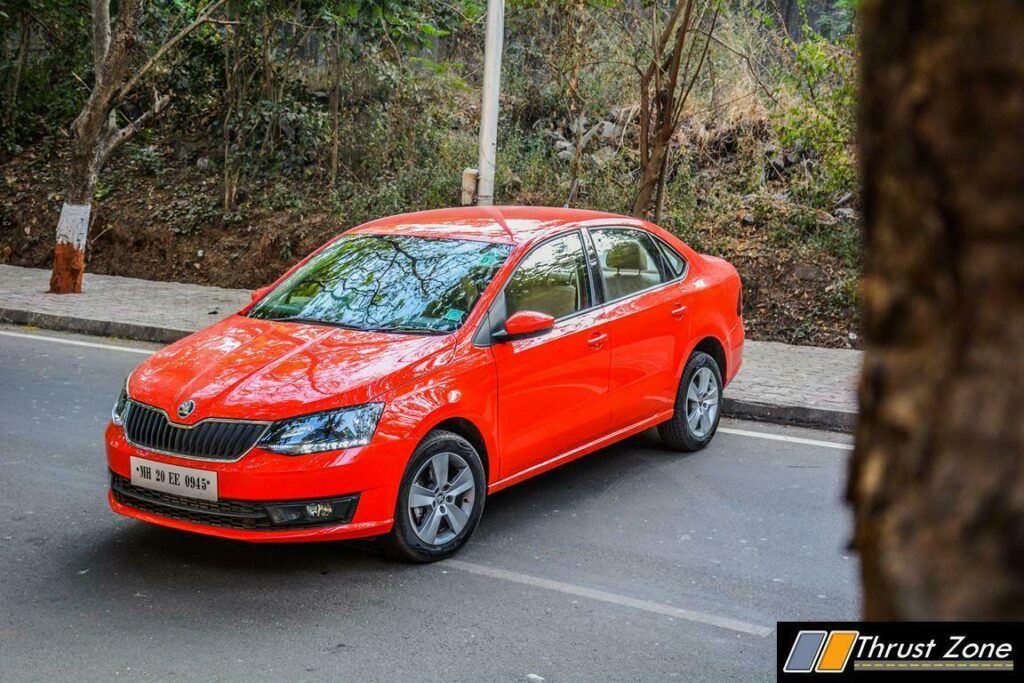 The name, the style and subtle engineering gone after the donor car made the Rapid better and the enthusiast have given it a thumbs up too. The Rapid was always the better choice. However, there have been some difficulties that the car has had. The ageing process slowed down a bit in the last three years, the Rapid now gets a lot of tweaks and more enhancements in key areas. We have initial yet comprehensive details as we spend some time with the car. Let’s find out how it plans to impress this time. 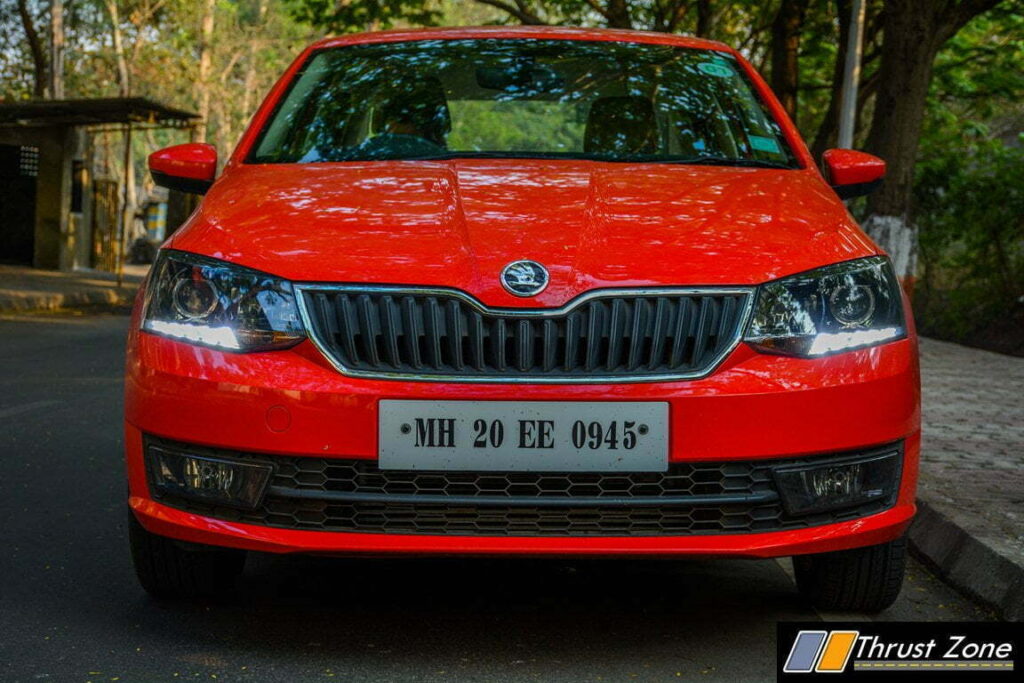 Majority of the design at first glance hasn’t changed. The side profile, the wheels, the rear-end and tail-lamps haven’t changed at all. The major change is at the front where you get the new headlights, which have well arranged DRL Led lights and projector in built into them. They remind of the Superb. The grille has changed and the bonnet design at the edge has been tweaked. The front bumper is also tweaked and so is the rear bumper. 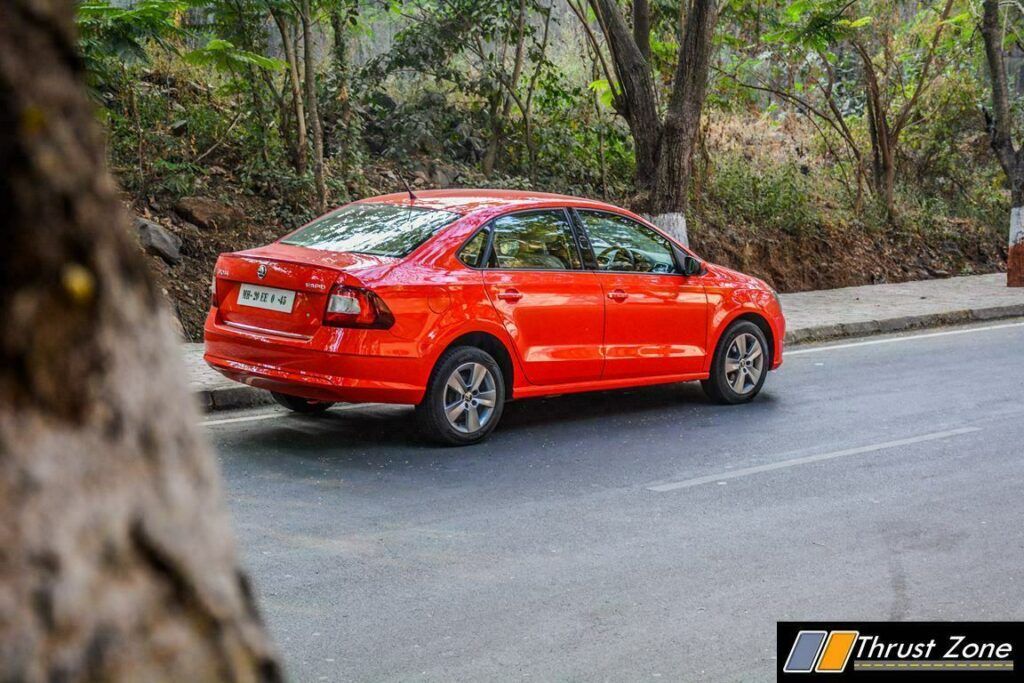 Overall, there ins’t much to differentiate the old car from the new one, but there are enough changes along with elegant yet sporty design profile, which includes the uniquely shaped B and C-Pillars that it offers to make the car look refreshed and impress prospective customers easily. 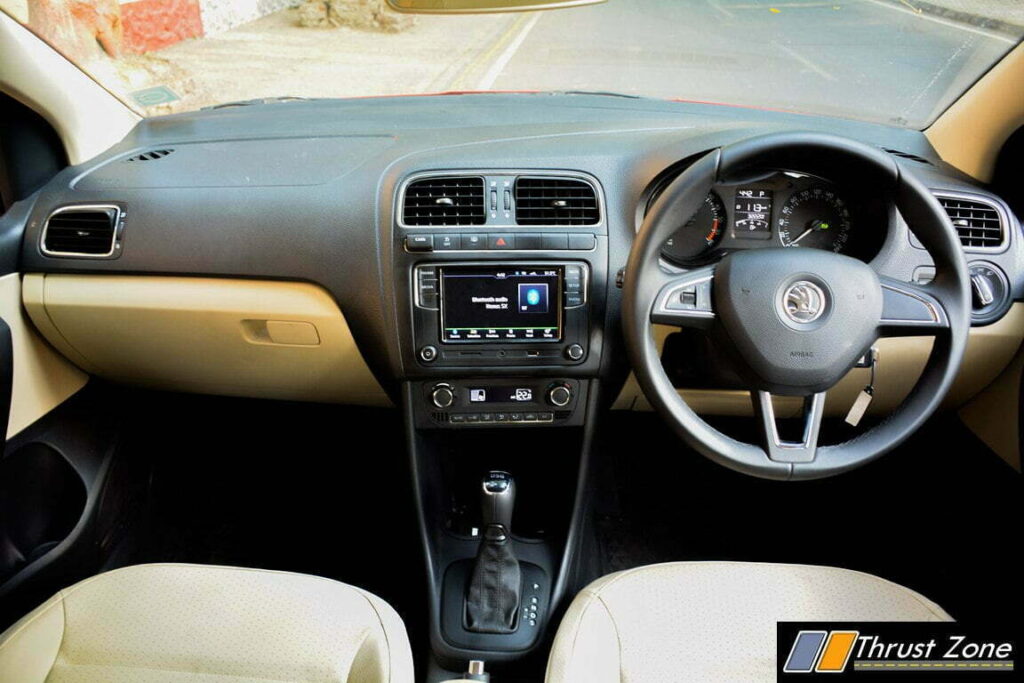 Step inside and immediately you don’t see much of a change, which is a good and bad at the same time. The bad things include there isn’t much of feature list upgrade here. The key-less entry and start-stop feature, reversing camera, still doesn’t make it to the car but apart from that it continues to have everything on offer. There is automatic climate control, steering mounted control for audio and telephony along with a new 6-5 inch touch screen system which allows you to control infotainment options. There are connectivity options such as AUX, USB, Bluetooth and Mirror Link to pair your phone with. There is card holder as well. Electric ORVM, automatic day/night chromatic rear view mirror is available. Parking sensors, cruise control and fully adjustable steering are on offer. 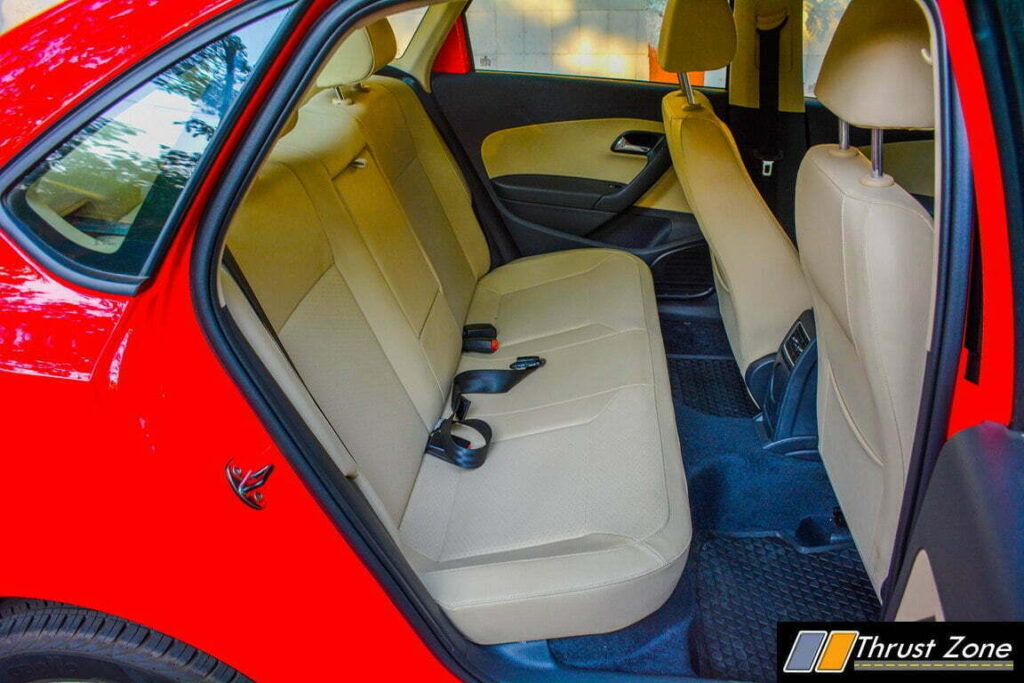 Space is where the Rapid continues to impress. There is a lot of legroom on offer, good under thigh support, decent amount of headroom and shoulder room by segment standard is on offer. It’s Japanese rivals though, offer more space but they lack on seat positioning or lack under thigh support. There is a rear arm-rest with cup-holders and a cup-holder below the rear a/c vent on offer. Boot space is also the highlight as it has a very practical opening and space stands at 470 litres which is segment standard. 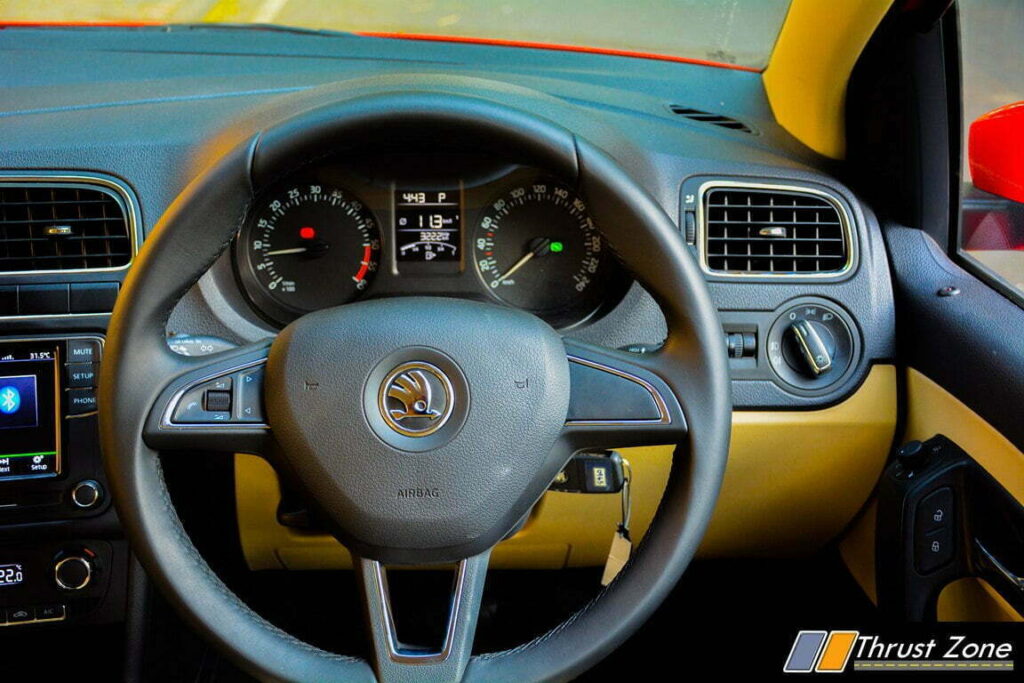 In terms of interior then, there is a slight change in color schemes that is offered over the car in the past as this new beige and black color did do justice with the red paint on the outside. A/C works really well in both rows as it chills the cabin quickly. Overall, there is where the Rapid impress and quality continues to be impressive as most things are soft to touch and feel high quality. 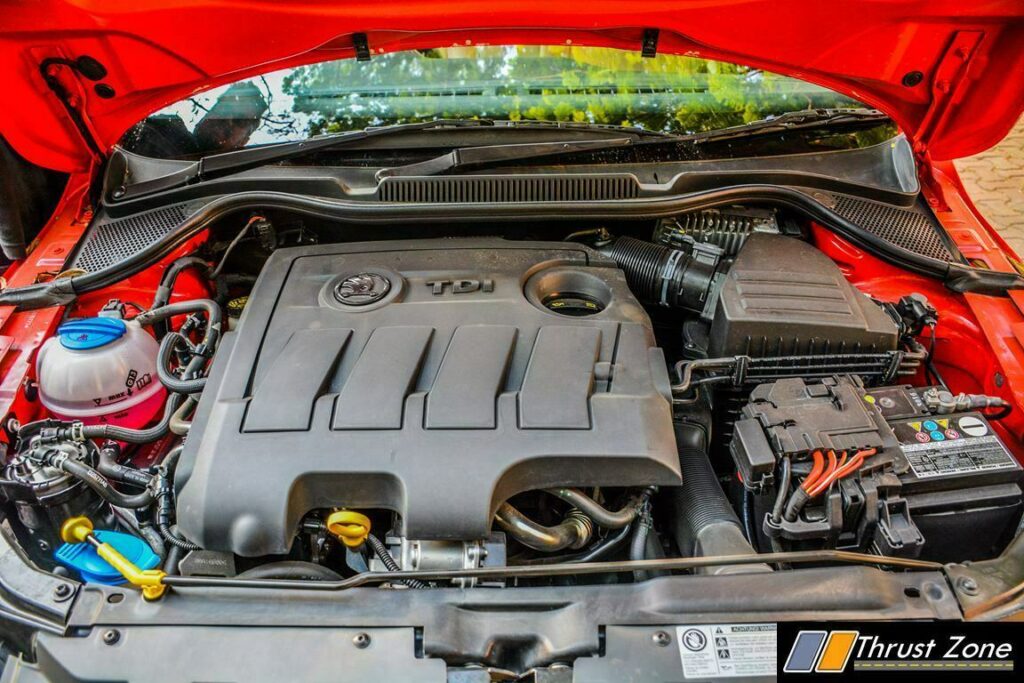 We had the test car with 1.5 diesel motor which has been updated for 2017. The new motor makes 110 PS of power and 250 Nm of torque. Earlier this engine made 90 PS in the VW Polo and the 1.6 engine had 105 BHP on offer. This new engine (with this 110 PS tune) was seen on the Ameo first has made it to all three cars of the brand. A new turbocharger has helped the car get higher numbers and fuel-efficiency has gone up as well. 1.6 was a free revving engine that had a good amount of turbo lag below the 2000 RPM mark. However, the turbo kicks here around 1800 RPM and there is still lag below it. 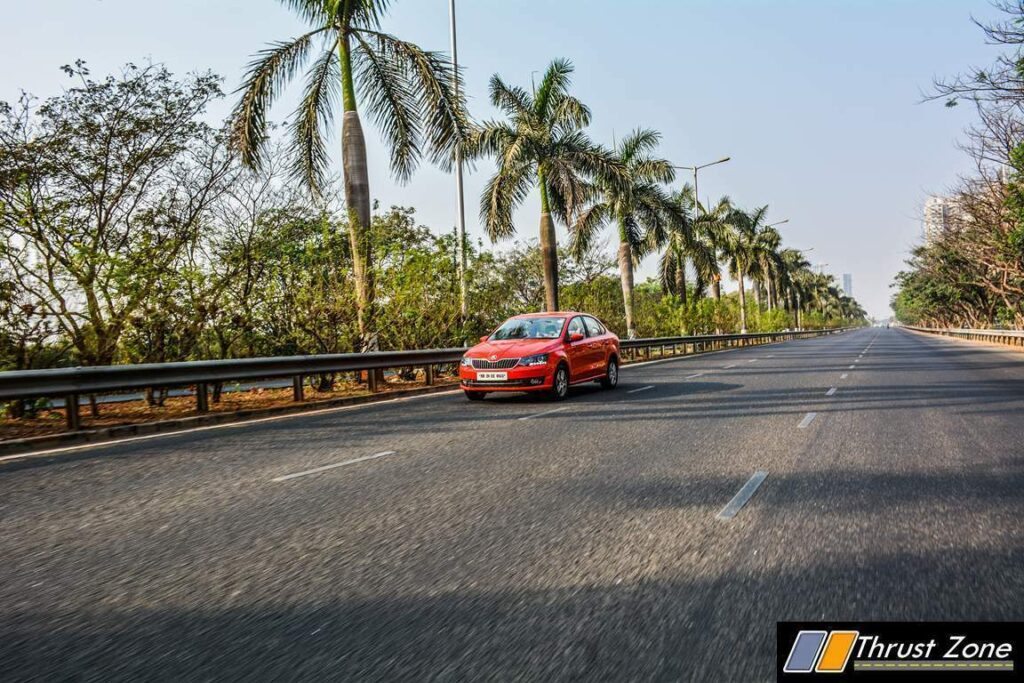 As a result there is more low-end torque than before (Because turbo kicks in at 1800 RPM than 2000 RPM of the earlier car) and lag is still apparent, but like last time, there is enough torque and clever gearing that doesn’t make you realize most of it. City driveability is good enough and post that the fun lies as the car keeps on pulling above 1800 RPM as the fast DSG gearbox keeps on up-shifting around 4000 RPM in D mode. S mode makes the gearbox shift around 5000 RPM, which isn’t necessary until unless you are racing at the track. Mid-range and top-end power is clearly much more superior than its rival and the car has a proper 185 km/hr on the test machine, speedo shows a bit higher.

NVH levels can get louder if you put it in sport mode but still, isn’t extremely intrusive as it sound rather good for a diesel. Normal driving will see a bit of sound coming in, however, while idling, the clatter is minimized over the 1.6 by a big margin. We got 18.8 km/l in city and highway combined. 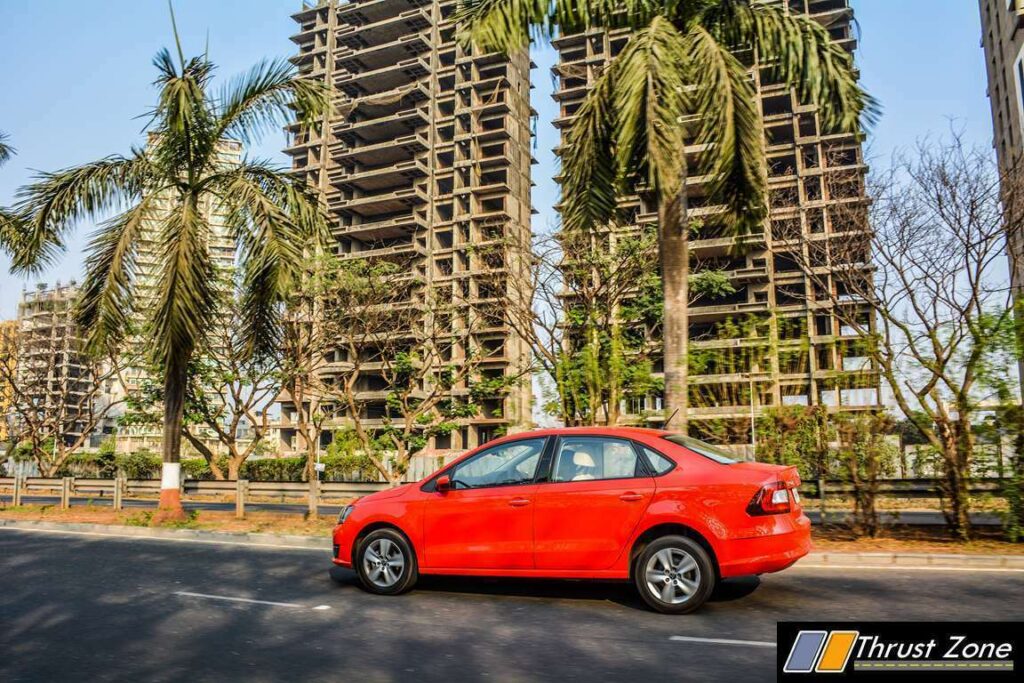 We haven’t road tested the car completely and we will give you the separate numbers with diesel manual variant once we test it. Overall, this is the place where the Rapid shines as it is a great cruiser thanks to 7-speeds in the gearbox. Along with that, it offers great acceleration and right amount of mid-range power, making it a true enthusiast package with an all-rounder engine.

Dynamically, the Rapid has been better than its cousin and it continues to do so. Slightly stiff over the Vento means it’s more mature at taking our broken roads and even big bumps don’t upset the car completely. The steering offers decent amount of feedback and it is very direct and light at the same time. All of this makes maneuvering in the city easy and at highway speeds it gets heavy enough to inspire confidence. We wished all of these quality more amplified to make driving experience more involving. 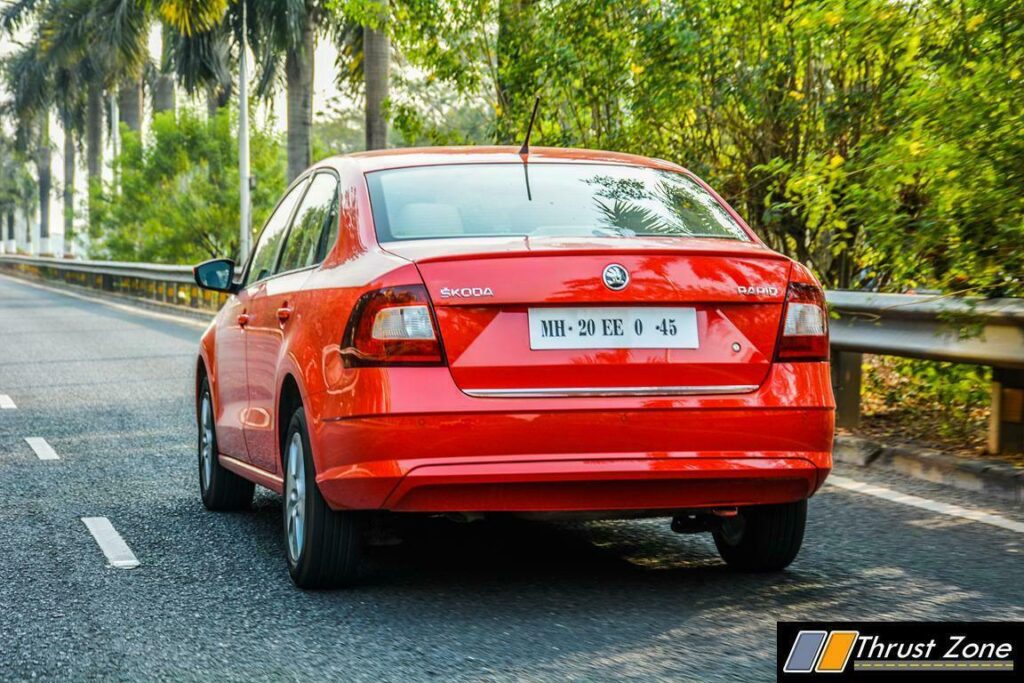 Brakes as always are great with good bite from the pedal and enough progressive power post the initial bite to stop the car at any given speed. Highway stability is spot on and the car can cruise at any given without making the driver nervous, a trait that is passed on by European car manufacturer for years, is seen on this affordable sedan too. 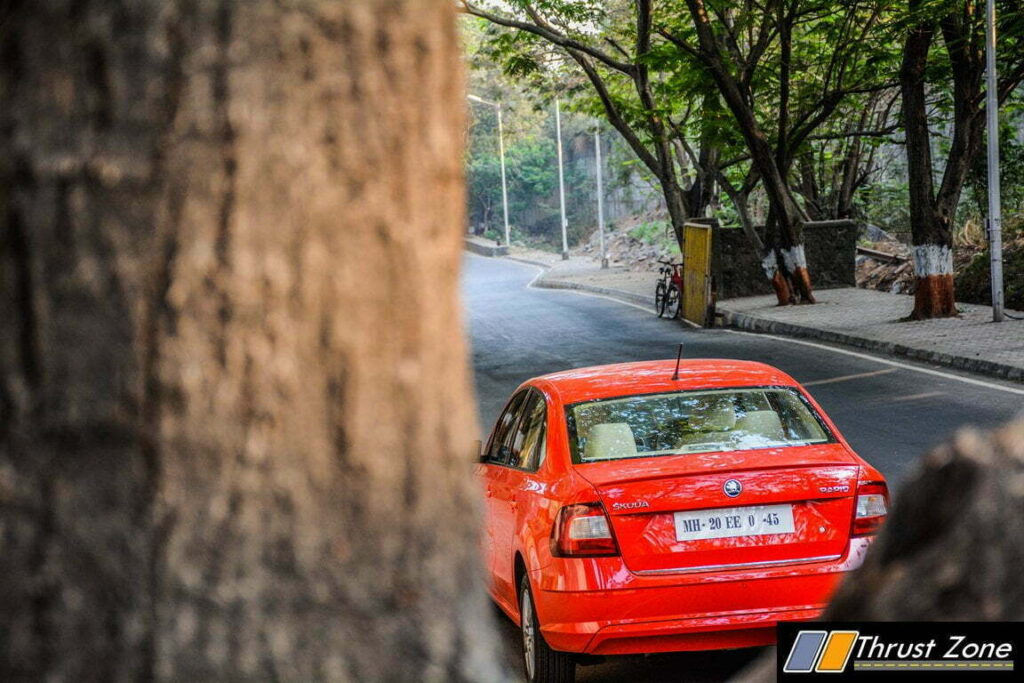 The Rapid continues to be stellar where it was with the earlier iteration. The car is great to drive, looks more dynamic and appealing than it cousin and offers a good amount of space and practicality at a price tag that is clearly a lot of value for its money. The feature list is good enough but it continues to miss on some. 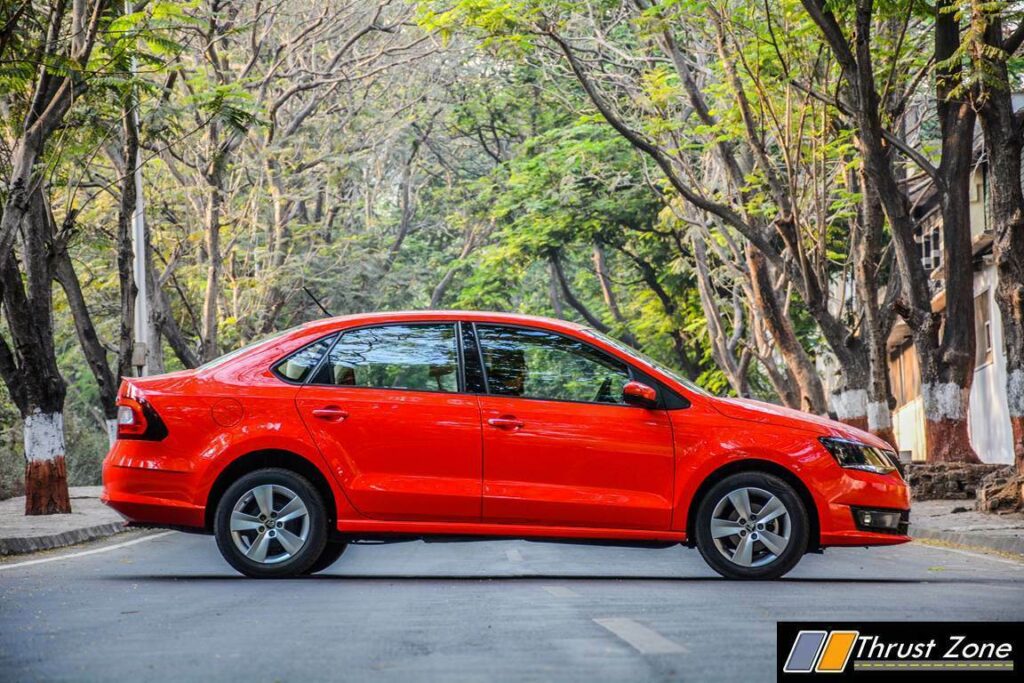 However, it makes up for it by offering so much more in various other aspects where its rivals cannot. Rapid offers basic safety package as standard, a diesel automatic which is second most powerful in segment and this time it vows to offer segment best service packages as well for complete peace of mind. Clearly then, Rapid deserves much more attention that it had early as the entire package got more transparent and solid like never before.