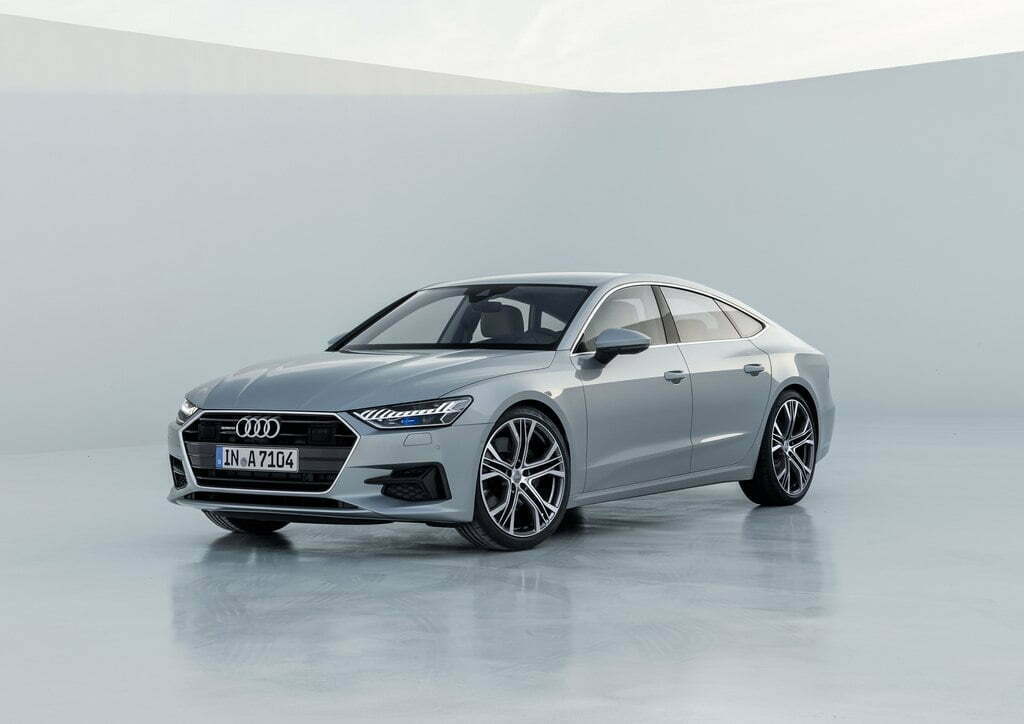 2018 Audi A7 Sportback is back with AI, all wheel steering, improvements in space management and even the windshield wipers and windshield are heated!

Up front, the Singleframe grille – wider and lower than that of the Audi A8 – the narrow headlights, the boldly contoured air inlets and the flat front end convey at a glance the sportiness of the Gran Turismo. The headlights are available in three versions. With the middle and top equipment lines, the light signature takes up the subject of digitalization: 12 adjacent lighting segments separated by narrow intervening spaces evoke associations with the binary digits 0 and 1. The top version is the HD Matrix LED headlights with Audi laser light.

A7 measures 4969 millimeters long, has a wheelbase of 2,926 millimeters and is 1,908 millimeters wide, but stands only 1,422 millimeters high. As with the previous model, the rear end is tapered like that of a yacht. The long luggage compartment lid terminates in a pronounced, curved lip from which an integrated spoiler extends automatically at 120 km/hr. The interior has all colors, upholstery materials and inlays underscore the new aesthetic, from the base version to the design selection, the S line sport package and the particularly Valcona leather. The optional contour ambient lighting package is on offer. 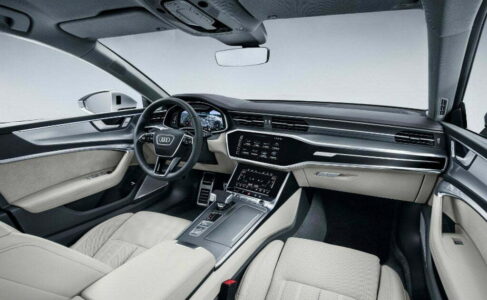 The 10.1-inch upper display (in combination with MMI navigation plus) is tilted toward the driver. With its black panel optics and framed in a graphite gray aluminum clasp, it almost disappears into the dashboard when switched off. The body supporting the clasp is itself a geometric sculpture. The display’s user interface appears as soon as the car is opened. In keeping with the interior design, the look is reduced and succinct. All screen content can be quickly registered. The new Audi A7 systematically continues the digitalization strategy of the A8. The interior architecture melds seamlessly with Audi’s new MMI touch response operating concept. It replaces the rotary pushbutton and the conventional buttons and controls of the previous model with two large, high-resolution touch displays.

The driver controls the infotainment system from the upper display. Mounted on the asymmetric console of the center tunnel, the 8.6-inch lower display provides access to the climate control system, comfort functions and text input. Drivers can rest their wrist on the automatic transmission’s wide selector lever knob. Audi offers an optional head-up display that projects important information onto the windshield. MMI navigation plus also includes the Audi virtual cockpit with a 12.3-inch display.

The MMI touch response operating concept features haptic and acoustic feedback and is as intuitive to use as a smartphone. Users hear and feel a click as confirmation when their finger triggers a function. With its logical and flat menu structure, the system allows fast access to the various vehicle functions, and it can also be personalized thanks to configurable and movable favorites buttons. The optional voice control in the new 2018 Audi A7 makes operation even more convenient. With MMI navigation plus, the natural speech dialogue system processes questions and commands in two ways – with information stored onboard and at the same time with detailed knowledge from the cloud. The new A7 Sportback comes standard with the MMI radio; MMI navigation and MMI navigation plus are available as options. There is a choice of four sound systems. The top version, the Bang & Olufsen Advanced Sound System, also delivers 3D sound to the rear seats. 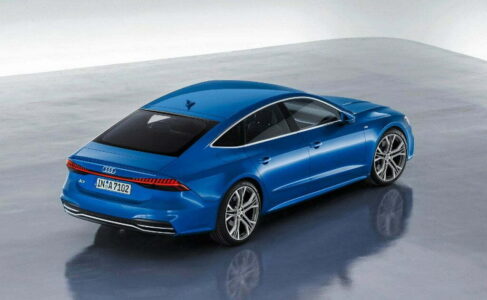 With the AI button, the driver activates the Audi AI remote parking pilot and the Audi AI remote garage pilot, which will be made available at some point in 2018. They autonomously maneuver the A7 Sportback into and out of a parking space or garage. The driver can get out of the car before launching the function via the myAudi app on their smartphone. To monitor the maneuver, the driver presses and holds the Audi AI button the entire time. The central driver assistance controller (zFAS) merges the data from a sophisticated set of sensors to continually compute an image of the surroundings. Depending on the equipment level, there can be as many as five radar sensors, five cameras, 12 ultrasonic sensors and a laser scanner.

Besides the Audi AI systems, the new 2018 Audi A7 features a total of 39 driver assistance systems to make things easier for the driver. They are split up into three packages: the Audi AI parking package (gradual introduction beginning 2018), the City assist package with the new crossing assist, and the Tour assist package. The latter includes such things as the efficiency assistant, which facilitates a driving style conducive to reducing consumption, and the adaptive driving assistant (ADA), which supplements the adaptive cruise control (ACC) with helpful steering interventions to maintain the lane. All driver assistance systems feature improved control mechanisms.

The optional dynamic-all-wheel steering, the new electronic chassis program (ECP) – the central controller for the chassis – and the updated air suspension are here. Many aspects of the front and rear axles have been developed from scratch. The standard progressive steering, whose generally sporty ratio becomes even more direct the further the steering wheel is turned, features a new concept for intensive road feedback. Mounted behind large wheels – up to 21 inches and 255/35 – with improved rolling comfort are aluminum fixed-caliper brakes with discs up to 400 millimeters (15.7 in) in diameter. Customers can choose between four suspension setups: a conventional steel spring suspension, the sport suspension that lowers ride height by 10 millimeters (0.4 in), electronically controlled damping and the self-leveling adaptive air suspension.

The top chassis-related innovation is dynamic-all-wheel steering. The steering ratio varies as a function of speed between 9.5:1 and 16.5:1 by means of active steering interventions at the front and rear axle. At the front axle, strain wave gearing is used to superimpose these in response to the driver’s steering input. At the rear axle, a spindle drive turns the wheels by as much as 5 degrees. At low speed, they steer counter to the front wheels to further increase the agility of the big coupe when parking or driving in urban traffic, for example. This reduces the turning circle at full lock by 1.1 meters (3.6 ft). At 60 km/h (37.3 mph) and above, the rear axle steers in the same direction to increase straight-line stability and facilitate lane changes.

The optional sport differential improves handing even further. It actively distributes drive torque between the rear wheels, complementing quattro all-wheel drive. Like dynamic-all-wheel steering, controlled damping and the adaptive air suspension, the sport differential is integrated into the control function of the electronic chassis platform (ECP). These systems are closely networked for maximum precision. The driver can use the Audi drive select system to activate different ride profiles. 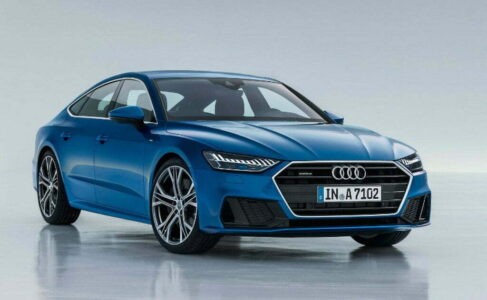 All engines used in the 2018 Audi A7 come standard with a new mild hybrid system (MHEV) for greater comfort and efficiency. With the two V6 engines, this uses a 48-volt primary electrical system. A belt alternator starter (BAS) works together with a lithium-ion battery and achieves a recuperation performance of up to 12 kW when braking. At speeds between 55 and 160 km/h (34.2 – 99.4 mph), the four-door coupe can coast in freewheeling mode with the engine deactivated and then restarted comfortably via the BAS.

2018 Audi A7 has start-stop function has been significantly expanded and now activates at 22 km/h (13.7 mph). In combination with the standard front camera, the engine is restarted predictively while at a standstill as soon as vehicle ahead begins to move. In real-world driving, the MHEV technology reduces fuel consumption by up to 0.7 liters per 100 kilometers.

Topping the range of all-new seats are the multi-adjustable, customized contour front seats with ventilation and massage. The configuration with individual rear seats (alternative: 2+1 bench) offers a plenty of space and comfort. The air quality package improves interior air quality by means of fragrancing with scents, an ionizer and an effective combination filter.

2018 Audi A7 body, which features steel and aluminum composite construction with large components such as add-on parts made of aluminum, is a key factor in the improved handling and greater comfort. The four-door coupe scores top marks with respect to body stiffness, aeroacoustics and aerodynamics. The improved panoramic glass sunroof with particularly large glass elements lets more light into the cabin. The heated windshield and wipers with integrated nozzles are additional options for more convenience.

The 2018 Audi A7 luggage compartment has a base capacity of 535 liters. This increases to 1,390 liters with the rear seats folded down. The luggage compartment has been optimized so that two golf bags now fit horizontally – in addition to the optional spare tire. The optional sensor-controlled rear hatch opens and closes automatically in response to a foot motion. The new Audi A7 Sportback rolls off the assembly line at the Neckarsulm site and will launch on the German market in late February 2018.