2018 VW Jetta spied Testing For the first time, unveil in January 2018. India launch could happen in 2018 is now set for unveil at Detroit Motor Show

Volkswagen, world’s second largest car manufacturer, famous for cars like the Beetle, Polo, Vento and GTI, has been producing the sixth generation Jetta since 2011. But now, thing will change as the 2018 Jetta will be launched next year. The prototype has been spotted, undergoing testing at a test track in the US The car has received an overall update with almost everything to be refreshed.

The test mule was spotted with LED daytime running lamps peeking through the camouflage. Also, the new car will be longer than the outgoing one with an increased wheelbase.

As we go on towards the exterior, the car has a raked roofline, with the glass area extending beyond the rear door. The wheelbase has also increased, giving more room inside. verall, the car will have a curvaceous shape.As we go on for the interior, most of the interior styling and electronics will be shared with the Golf, as the Jetta is a sedan version of the Golf.

Speaking about the Golf, the 2018 VW Jetta will be sharing the same MQB-platform with the Golf and there are also more chances to inherit the hardware from the hatchback, as the Jetta is a sedan version of Golf.

As for the engine options, the 2018 VW Jetta may get the same engine options, a 1.4L TSI four-cylinder engine that produces a torque of 200Nm, and a 2.0L TDI. But we are expecting the more powerful 1.8L TSI engine, as the Octavia, a direct competitor to the car has the 1.8L engine. 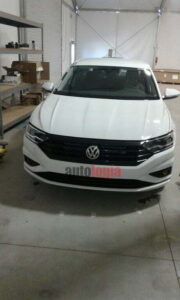 The price expected for this 2018 VW Jetta is around Rs. 15 Lakhs to Rs. 25 Lakhs, and for a car with the killer looks and performance, VW is expecting a huge hit after the emissions scandal has affected the company’s fame which will be not the case with the new one. Expect this car to come to India and go against the likes of Skoda Octavia and Hyundai Elantra.

Aston Martin DB11 Volante Unveiled – To Good To Be True!