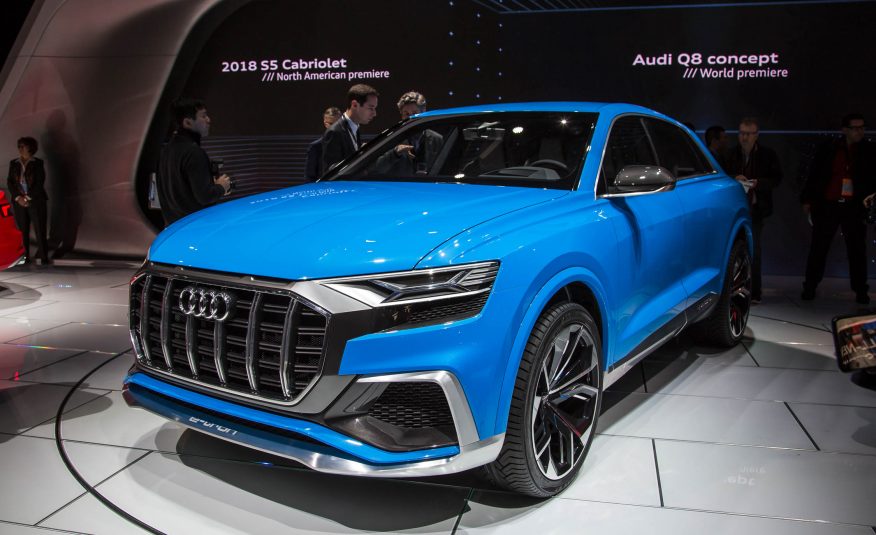 After long time running rumours and the lot of spy shots, the new Flagship Audi SUV has arrived. The 2018 Audi Q8 Concept has just been revealed by Audi at the ongoing 2017 Detroit Motor Show. This stunning Coupe-UV concept will lead to a new family design in the Audi Q range of SUV’s and is poised to be the sportiest Q model out there in the market when it arrives in 2018.

On the design front the concept with is super cool Bombay Blue colour looked menacing and is by far the most elaborate design change in Audi’s recent times. The front has a rather large gaping maw while the frameless windows gives it more of a proper four-door-coupe feel. The Q8 is essentially a chopped off sportier Q7 with its wheelbase that is 0.3 inch shorter than the Q7. However, the concept is much broader than the Q7 which is put into attention by a full-length tail light design. 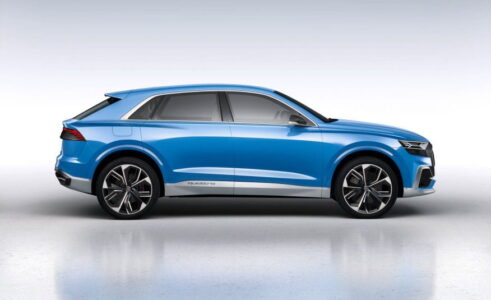 Inside, passengers are greeted to a barrage of touchscreens, and a feature rich all leather cabin that exudes German engineering’s finest fittings and material usage. The Car much like its competitors will seat four in prime comfort and fast paced Coupe-SUV hybrid design.

The production Audi Q8 will launch by the year end in major global markets while it will arrive in the Indian market in early to mid 2018. Expect the pricing of the Audi Q8 to hover around its main rivals as well. 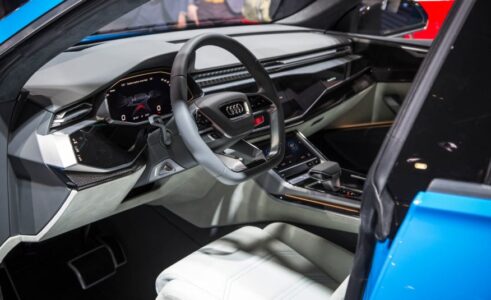 The concept was powered by a 333bhp turbocharged 3.0-liter V-6 mated with a 134bhp motor and an eight-speed automatic transmission. Combined, this hybrid system makes around 443bhp and 516 lb-ft of torque lending the Q8 some really massive performance figures of the likes of 0-62mph in just 5.4 seconds while a top whack would arrive at 155mph. Also the rear-mounted lithium-ion battery pack is good for a 37 miles all-electric range. This battery pack can be charged in around 2.5 hours through a 240-volt, 30-amp outlet. 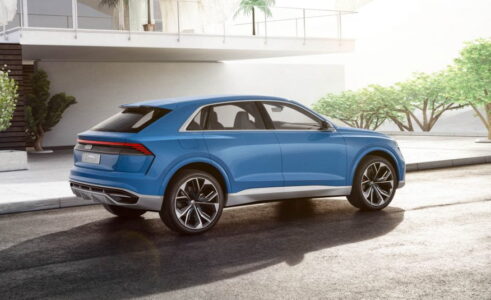 In production form, the car will also get slew of engine options like a V-6, a V-8, and possibly even an RS Q8 with a 500-plus-hp twin-turbocharged V-8. There will be diesel engines on offer as well, however, expect them to be the same ones on top spec Q7 and Porsche Cayenne lines.

When launched, The 2018 Audi Q8 will compete against the likes of upcoming BMW X7, Volvo XC90 and Mercedes GLS.