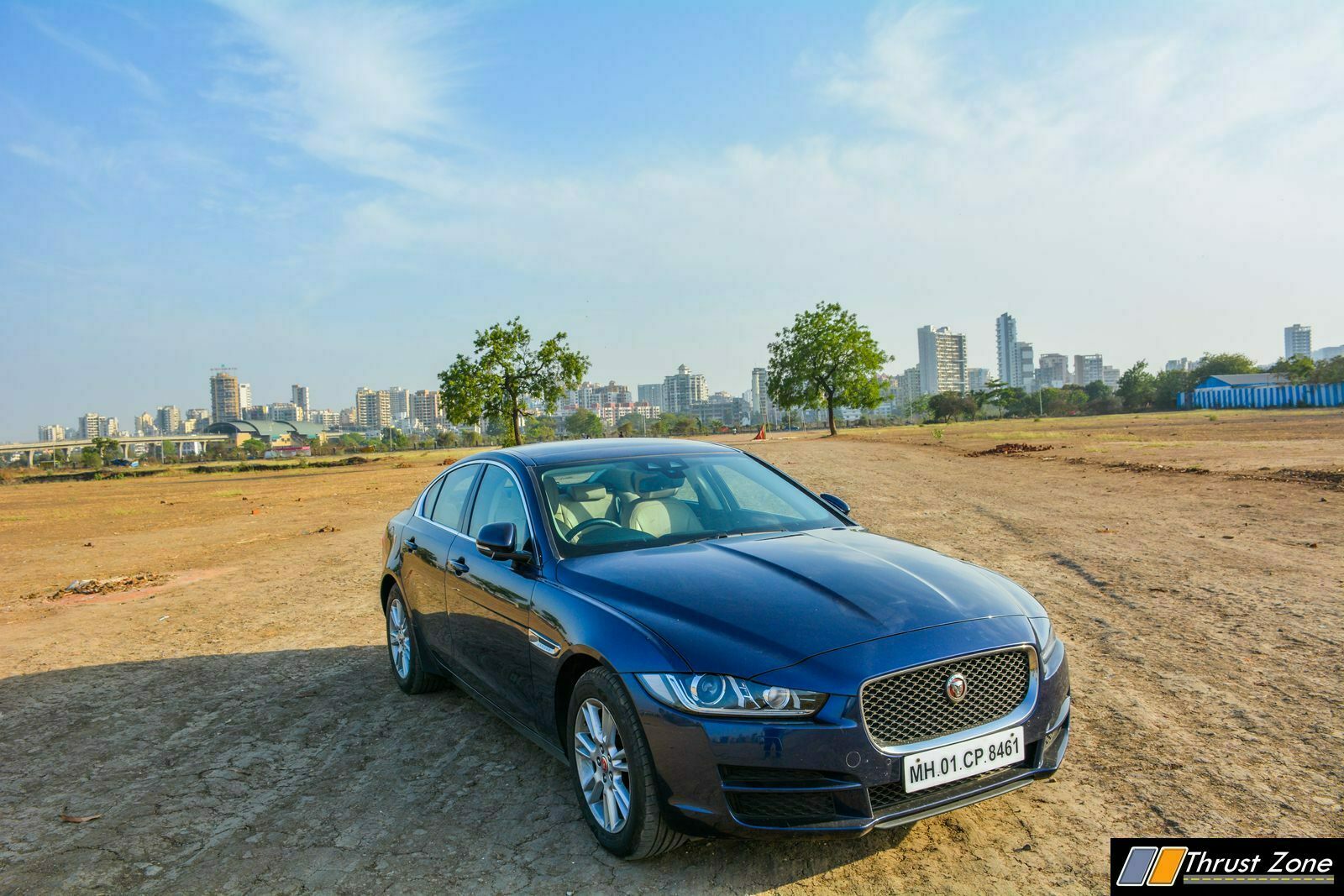 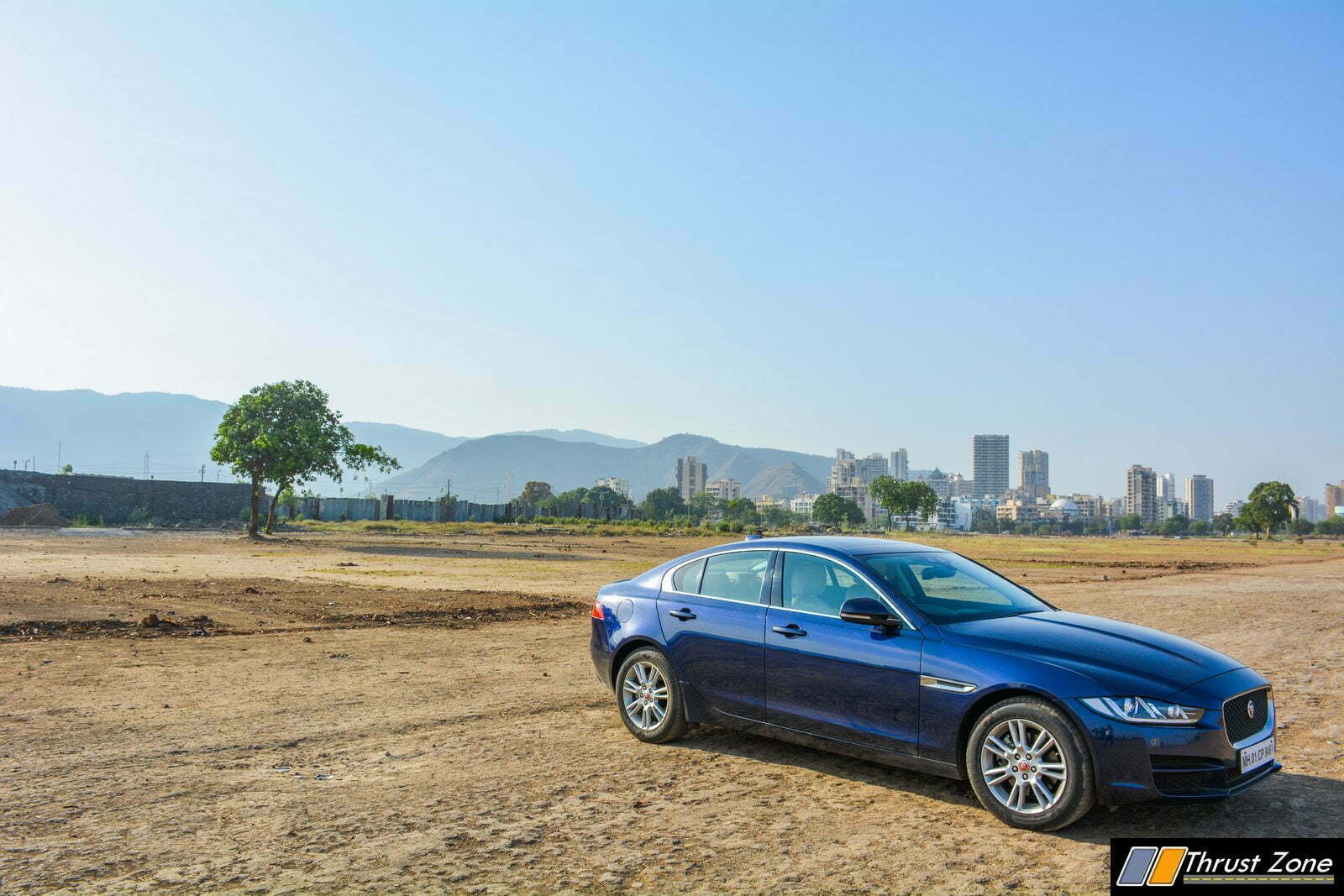 The word Baby Jaguar seems like a word we have been hearing since centuries. Thanks to all the anticipation created by foreign media, Jaguar may have decided that “let us go for it and make it rather than ignoring the idea”. Since marketing already was done for them in most of the part that a smaller Jaguar saloon is on the way, which has now paved the way for the XE saloon. The smallest saloon in its lineup, Jaguar launched with a lot of drama and got it to India as soon as possible. 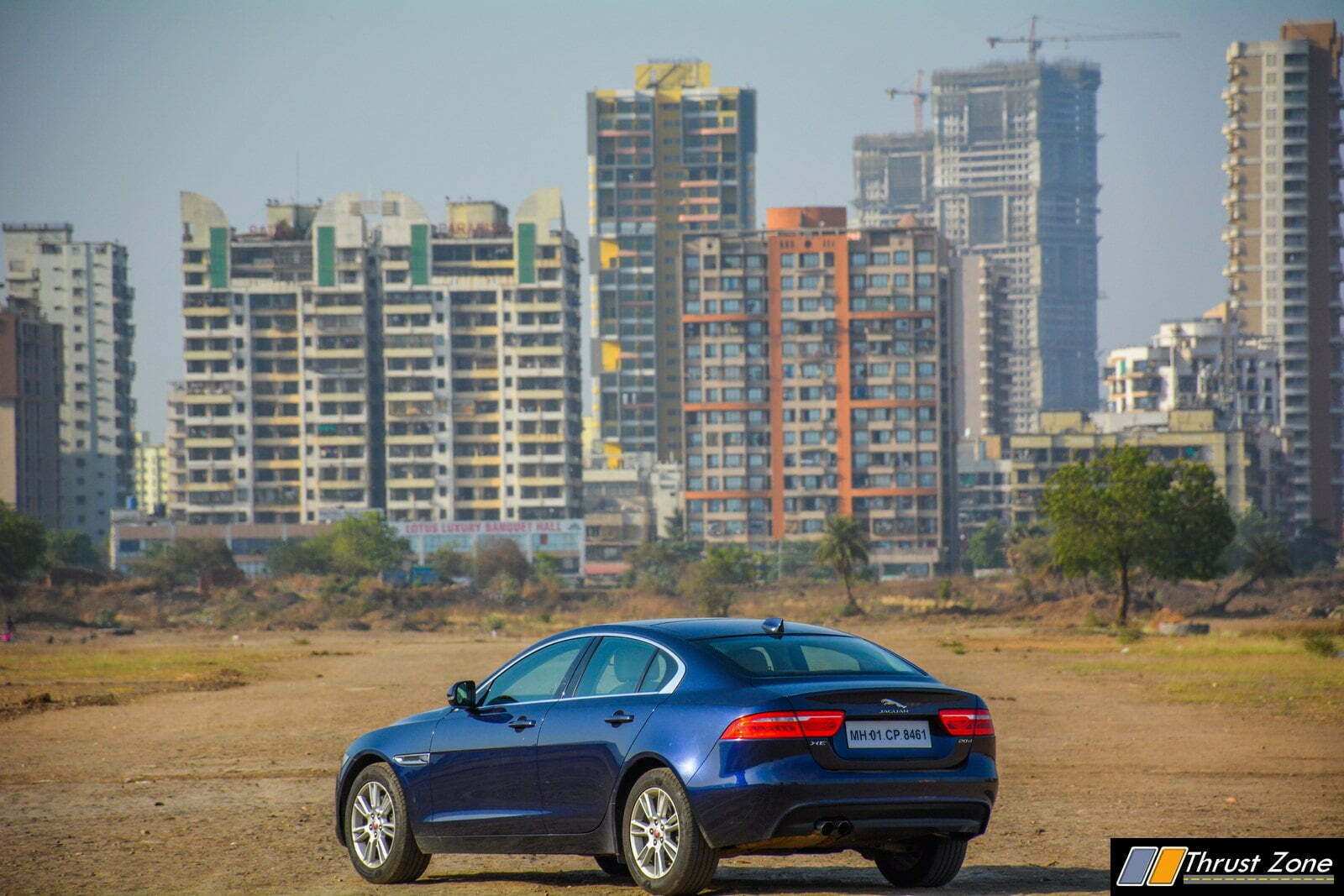 Last year, we tested the petrol version and came super impressed. Today, Jaguar has sent us the XE diesel for a review and we were yet again keen on driving it as our previous experience was fantastic. Now, with a pocket-friendly diesel engine and what sounds look exciting performance on paper, we headed out of the city to get a good sense as we drove on all possible roads. Dual carriageway, Indian highways, Expressways, twisty roads, demanding ghats and much more. Let’s find out how ‘extraordinary’ the XE is. 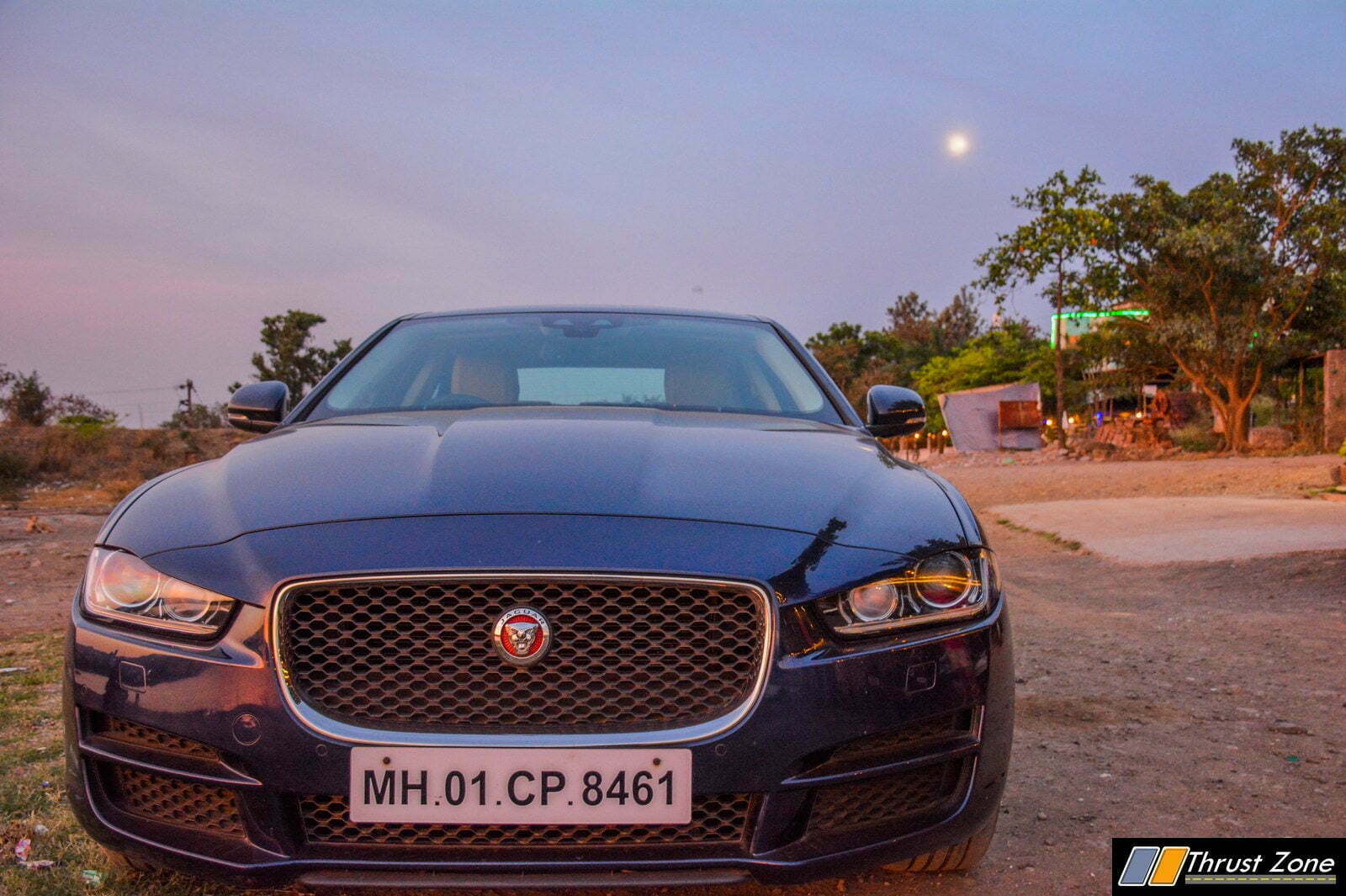 We urge Jaguar to ditch the navy blue test car all the time and send something different because the fantastic well-crafted elements of the car such as the large grille, sharp and bold headlight and tail-lamps and muscular bodywork are kind of hidden. Alloy wheels aren’t the exciting part but the 17-inch wheels do the job well enough to fill the wheel and give it an executive car look from far away. 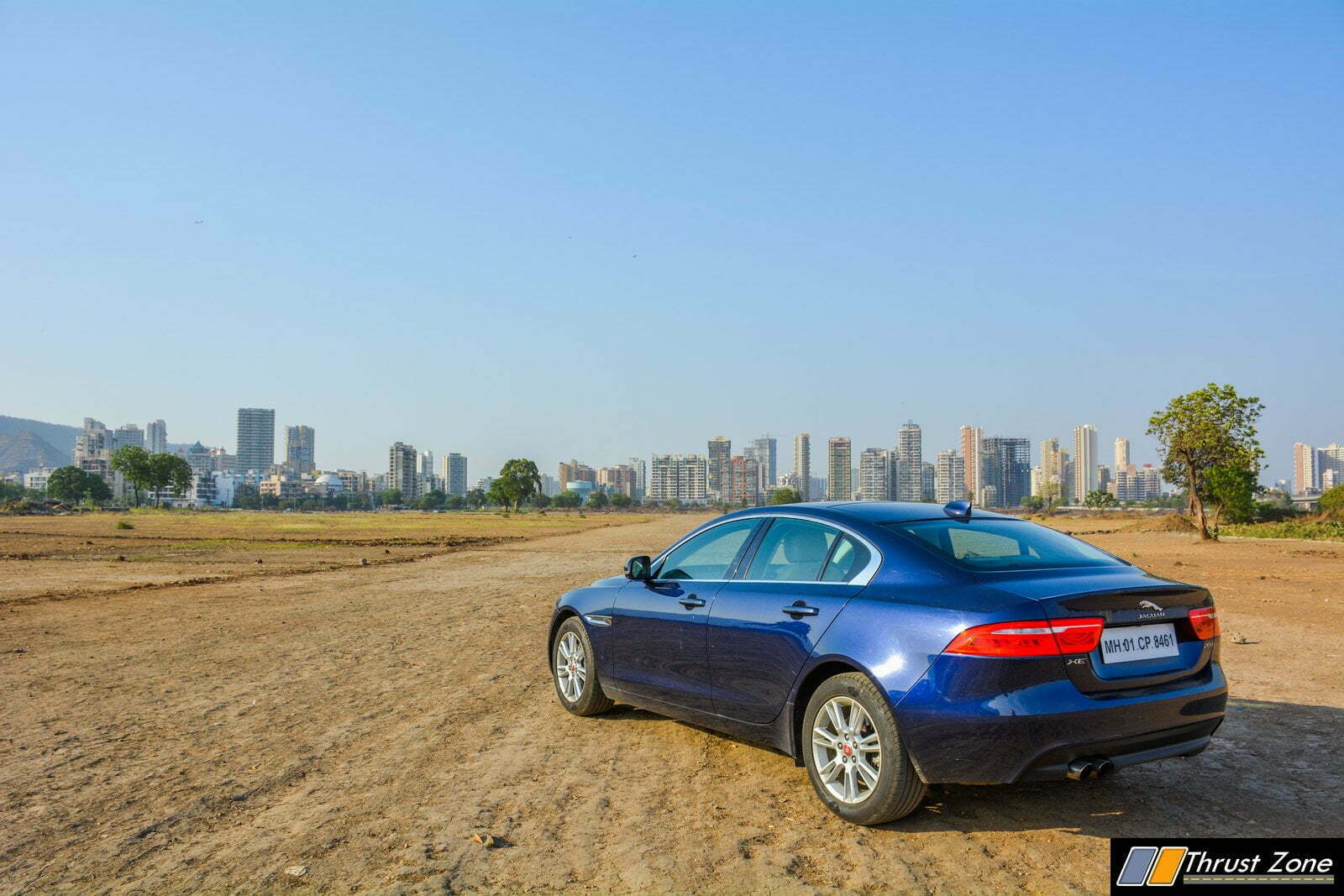 The profile is of a well-designed sports saloon which is long enough to look like a premium car but to also look like a baby Jag. Needless to say, if you follow our Jaguar reviews, we are fans of Ian Callum on how he gets the job done remarkably well and keep the legacy alive even after all these years. 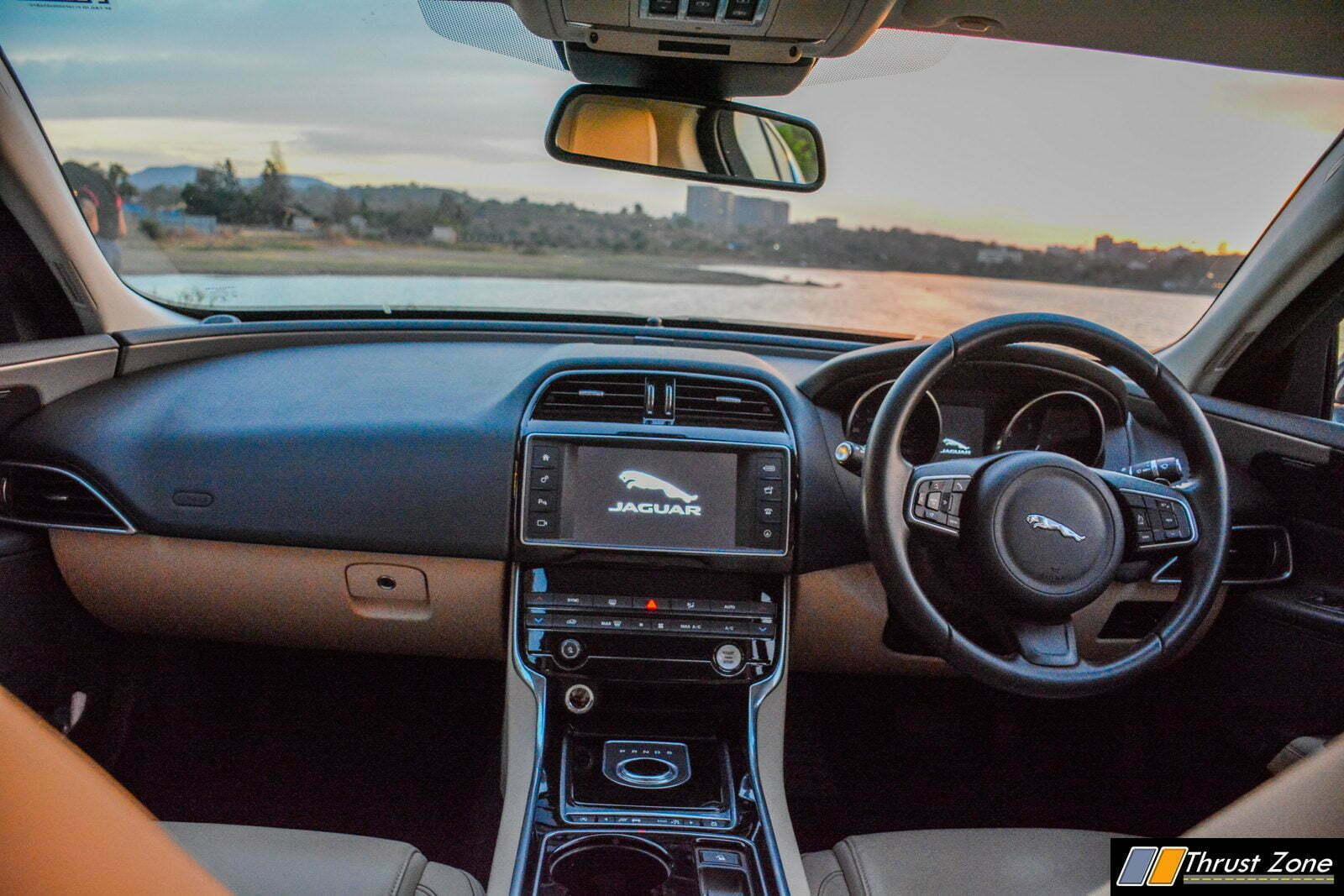 Interior layout is something that carries Jaguar’s tradition of a large dashboard which has a cut out only for the screen but runs around you in a 180-degree pattern to make you feel at home, as a driver. Quality in most areas is good, but it could do with a bit more pampering. Infotainment system needs a bit of upgrade as well as it still lacks Apple Car Play and Android Auto. Incontrol App from Jaguar doesn’t do the job quite well. 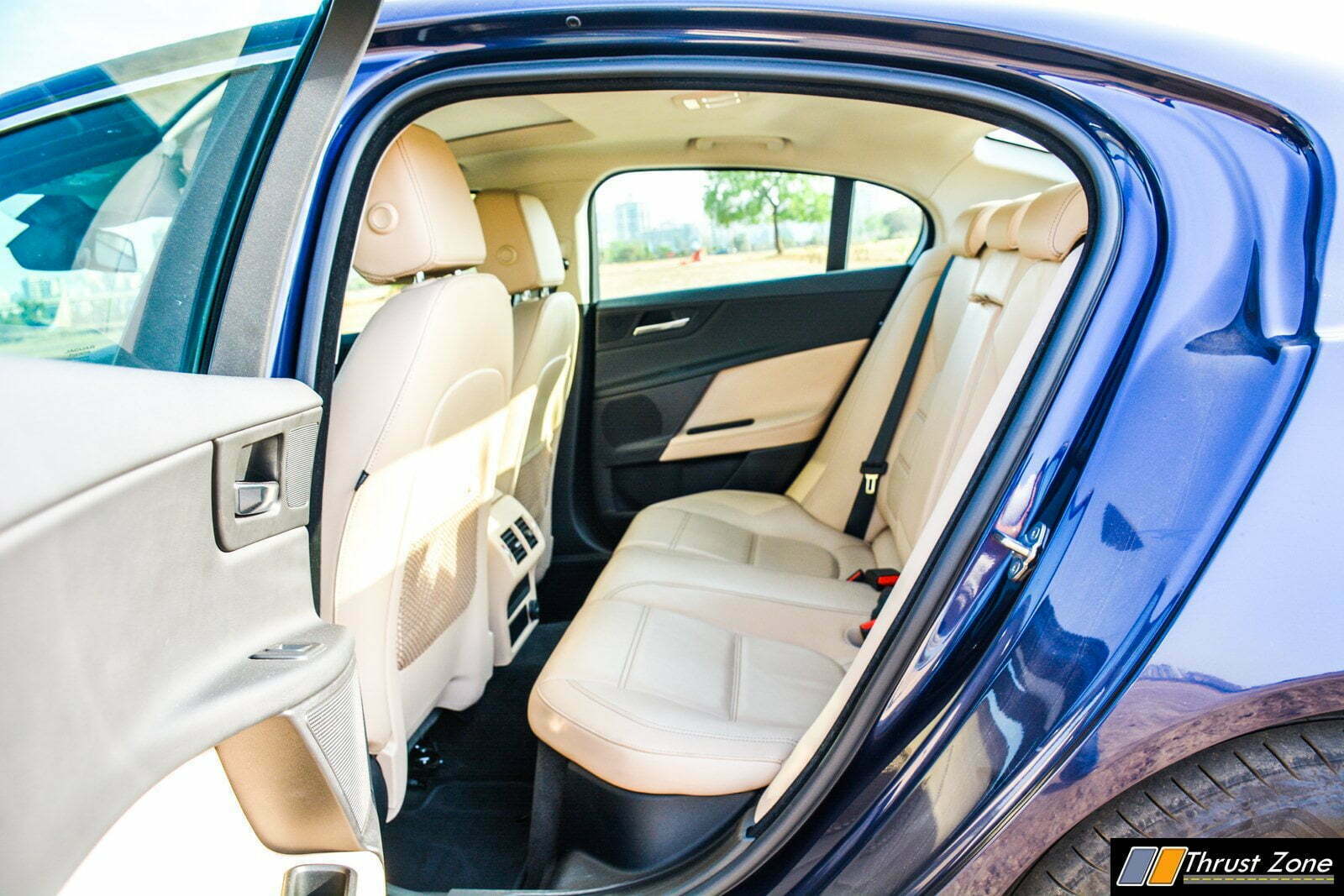 The touchscreen is slightly reluctant to inputs. Controlling everything from the steering wheel also displays similar results. What is amazing is the gear knob coming out, the fantastic Meridian™ Sound System which we give 8 out of 10. Fully electric seats on both sides with lumbar support and driver side memory are on offer. Fully electric and monochromatic ORVM and IRVM, all connectivity options, cruise control, surround camera system, parking sensors on both ends, sunroof, projector headlamps (Sadly not fully LED yet), TPMS, keyless entry, climate control, leather seats and interior mood lighting is on offer. Safety kit is a lot as with every Jaguar. There are 8 airbags, ESC, ABS, EBD, All Surface Progress Control (ASPC) on offer. 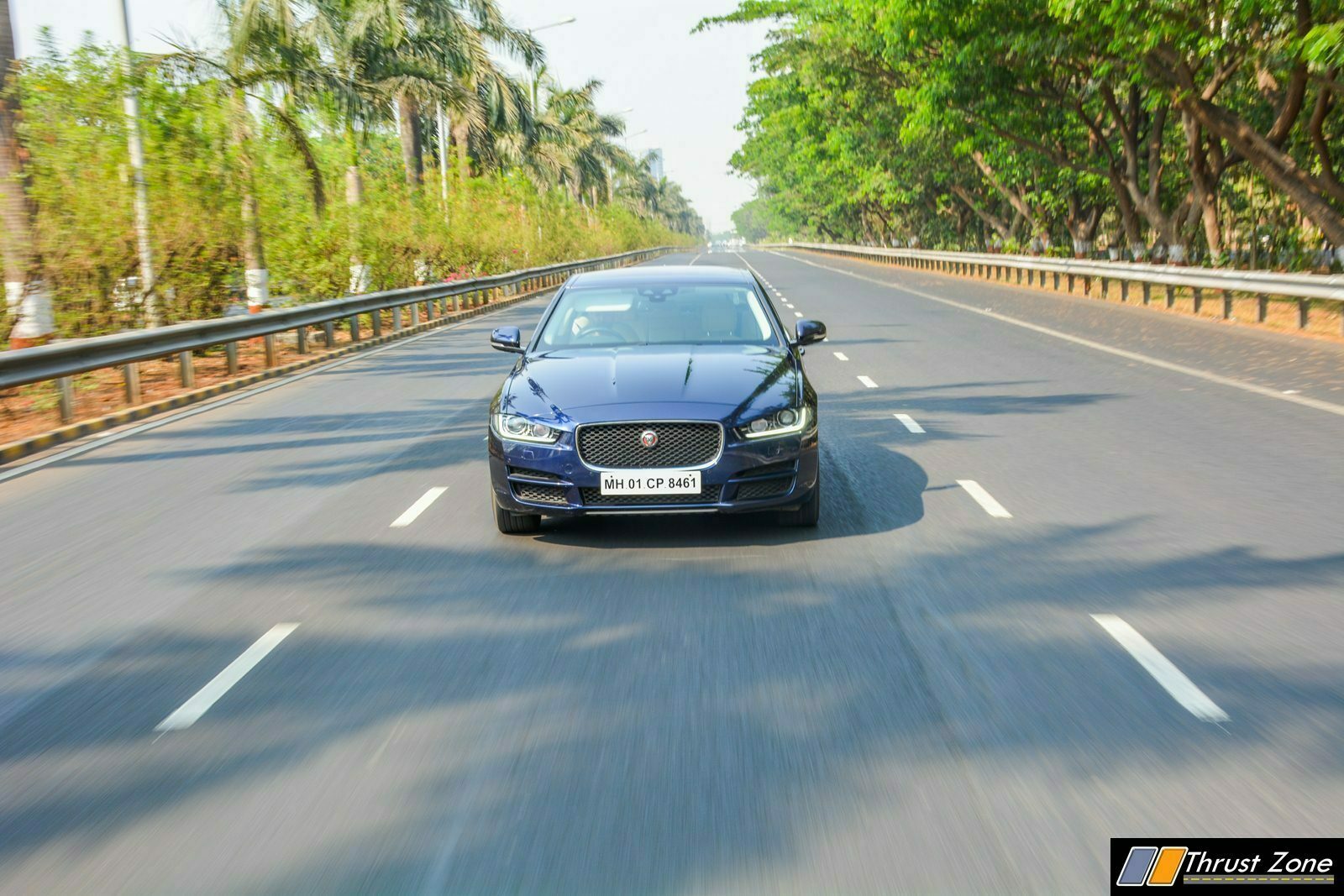 The engine is the Ingenium 2.0 litre diesel motor which is an all-aluminum turbo-charged motor making 180 BHP and 430 Nm of torque. The engine is terrifically refined as NVH levels inside the cabin are well controlled. The 8-Speed gearbox is very smooth and fast enough. There is a lot of driveability on offer in the city and you make quick progress by overtaking and closing large gaps easily. Mid-range and top-end performance is really good, the car reaches illegal triple digits speeds without any consent of the driver if he or she is not focused enough to how heavy their right foot can be. 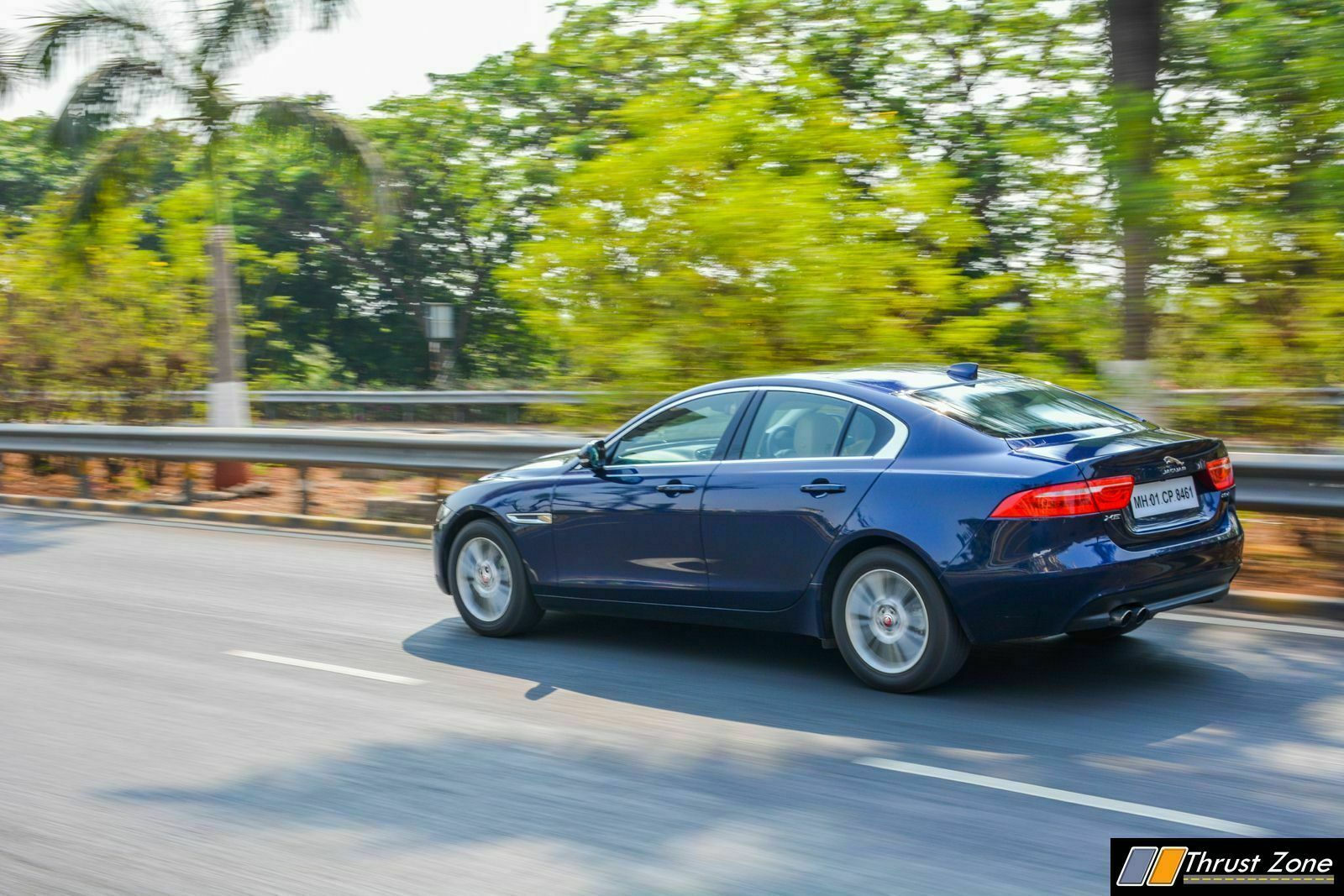 The engine can sound quite good at high revs and idle and low revs also as it isn’t clattery. Jaguar is making seriously efficient engines. In our 650 km trip the car returned 11 km/l which included high and low speeds in all sort of conditions and roads. Driving modes make a lot of difference as the sports mode makes power more accessible and quick. Shift the gear knob in sports mode and the gears seem to shift faster and reach the redline. Paddle shifter allows more control which is great. The car doees 0-100 km/hr in 7.7 seconds and has a top speed of 230 km/hr. 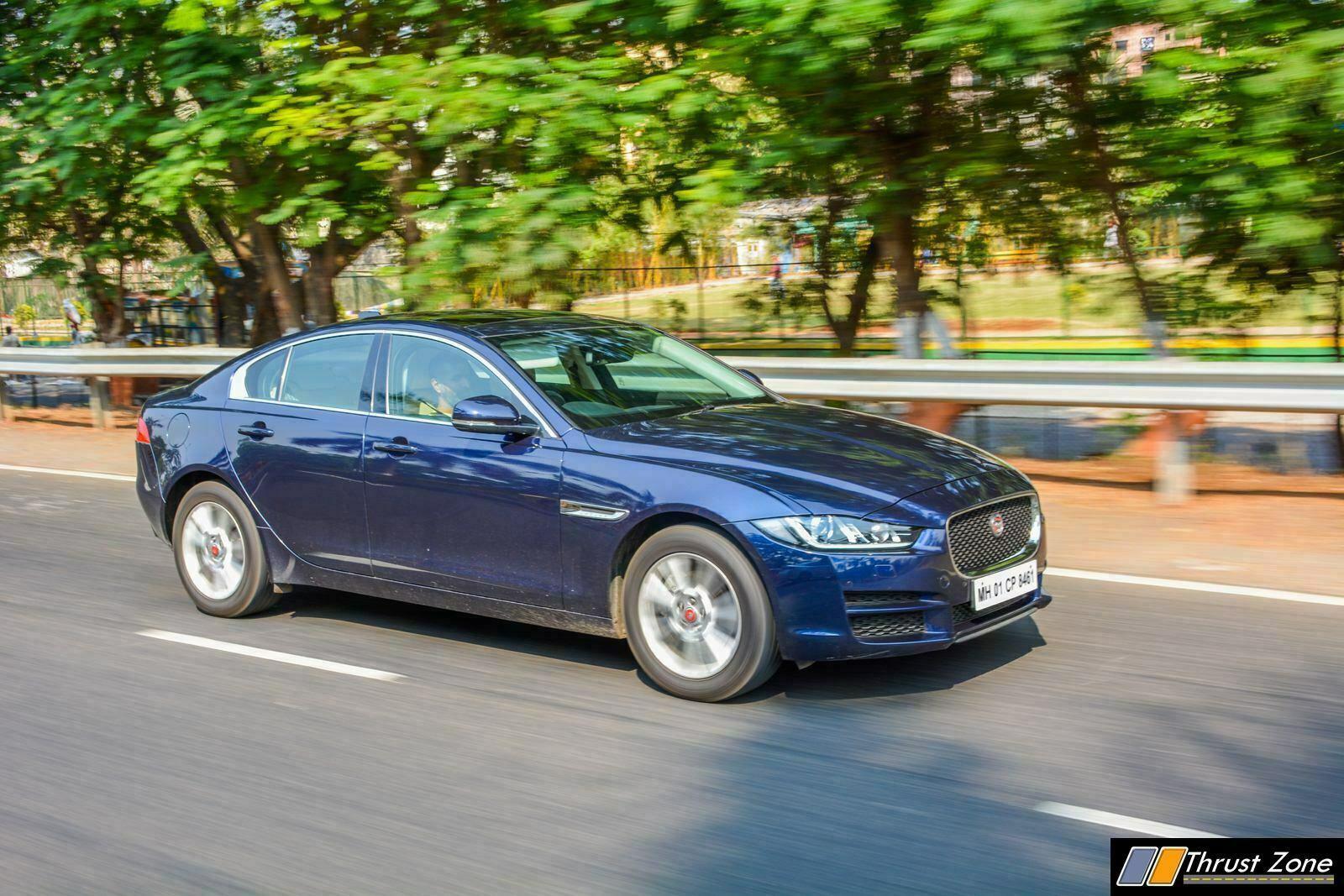 Dynamically, we attacked our favorite ghats and we were bitten by this cat, almost, in the face. The agility it offers, the well-controlled body roll and direction changes it offered was startling without compromising on ride quality and that made things stable over our uneven surfaced highways. Be it in normal or sport mode, the fun to drive nature of this car is phenomenal. 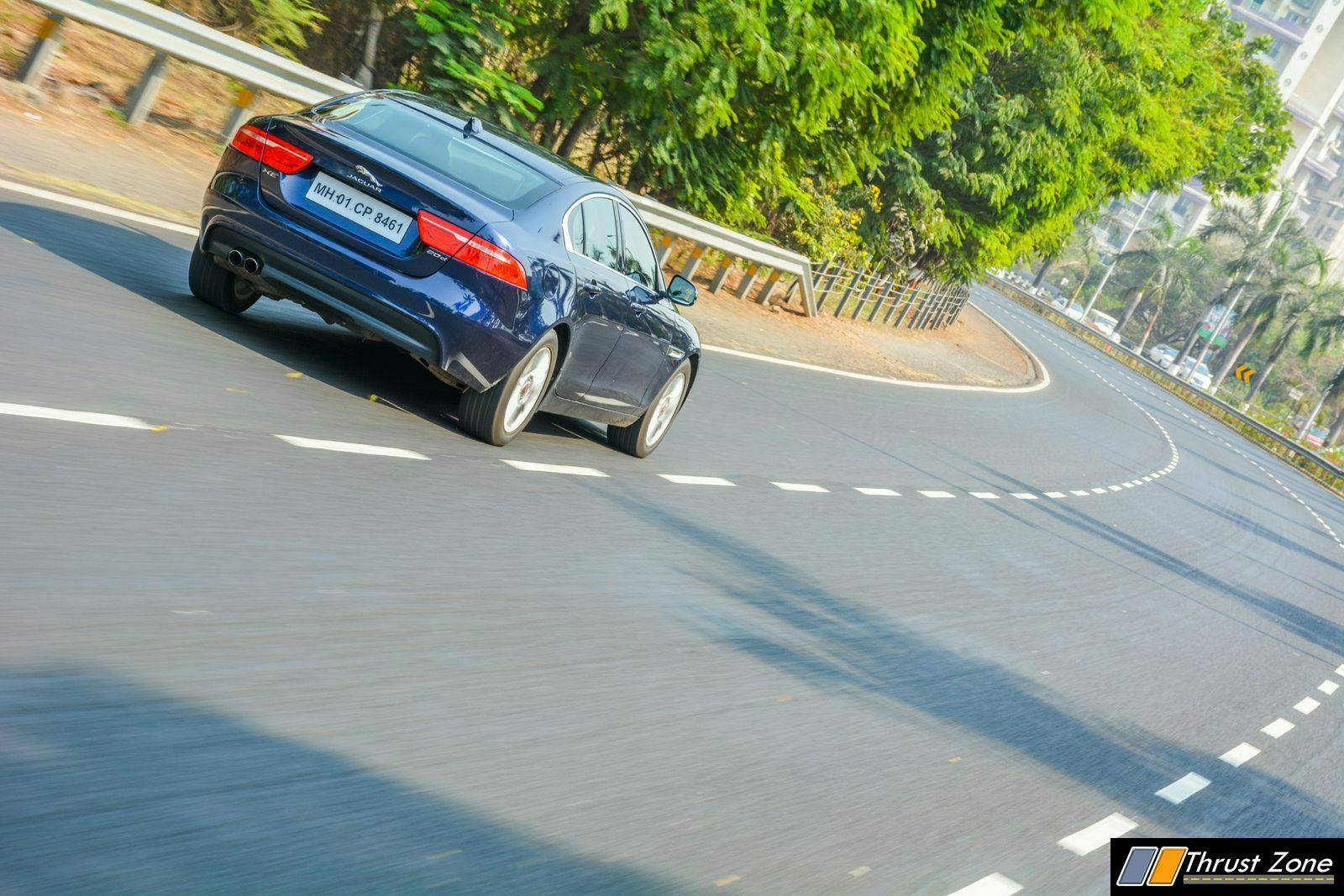 The XE diesel has torque in abundance and the wheels spin and the car never hesitates to wag its tail when you go hard on the throttle in the corners. Every roundabout, the car wants to spin if you have heavy foot while driving this car. ‘A very practical enthusiast car driven in a very long time award’ is for the Jaguar XE. Steering and brakes are precise and feedback-rich. 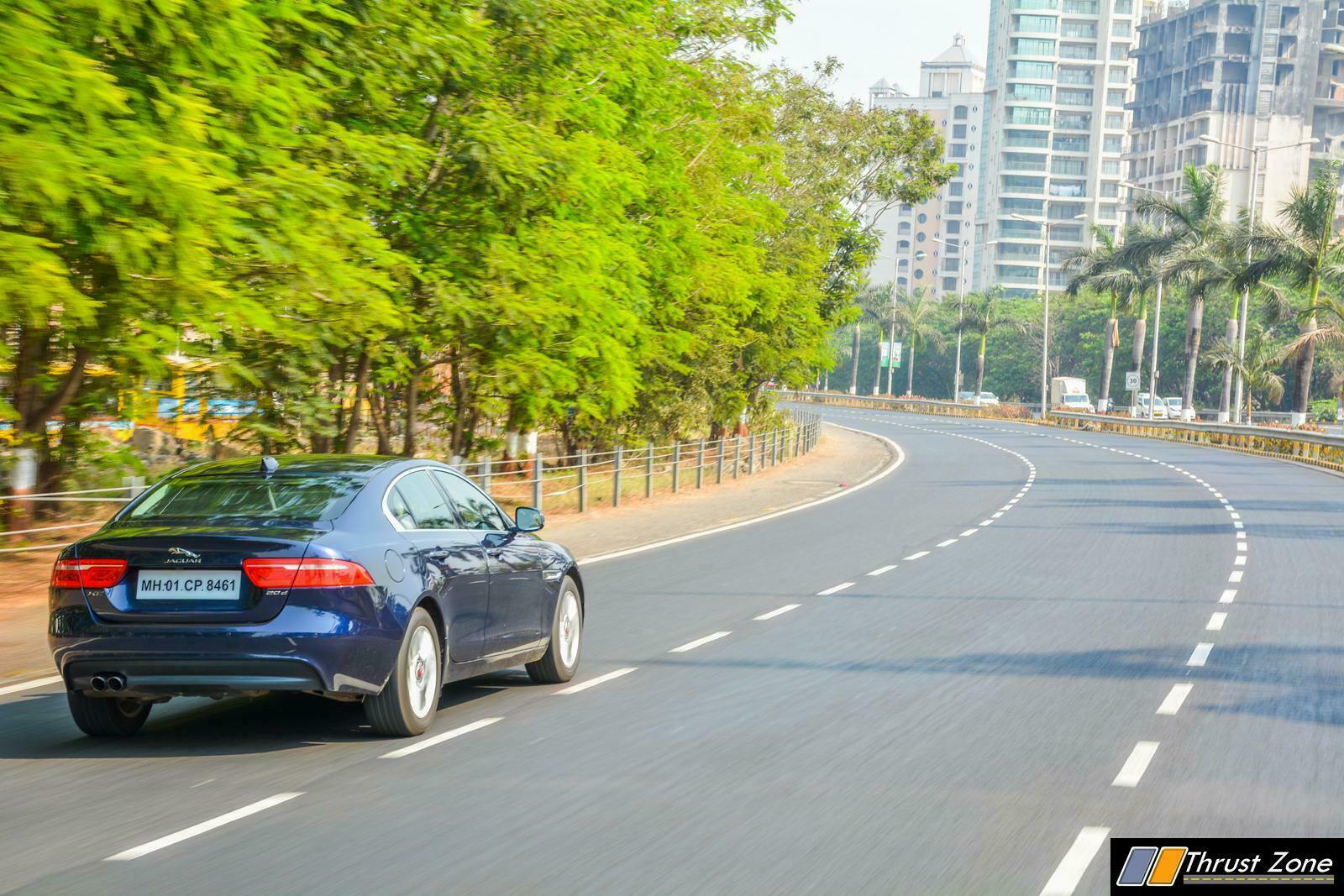 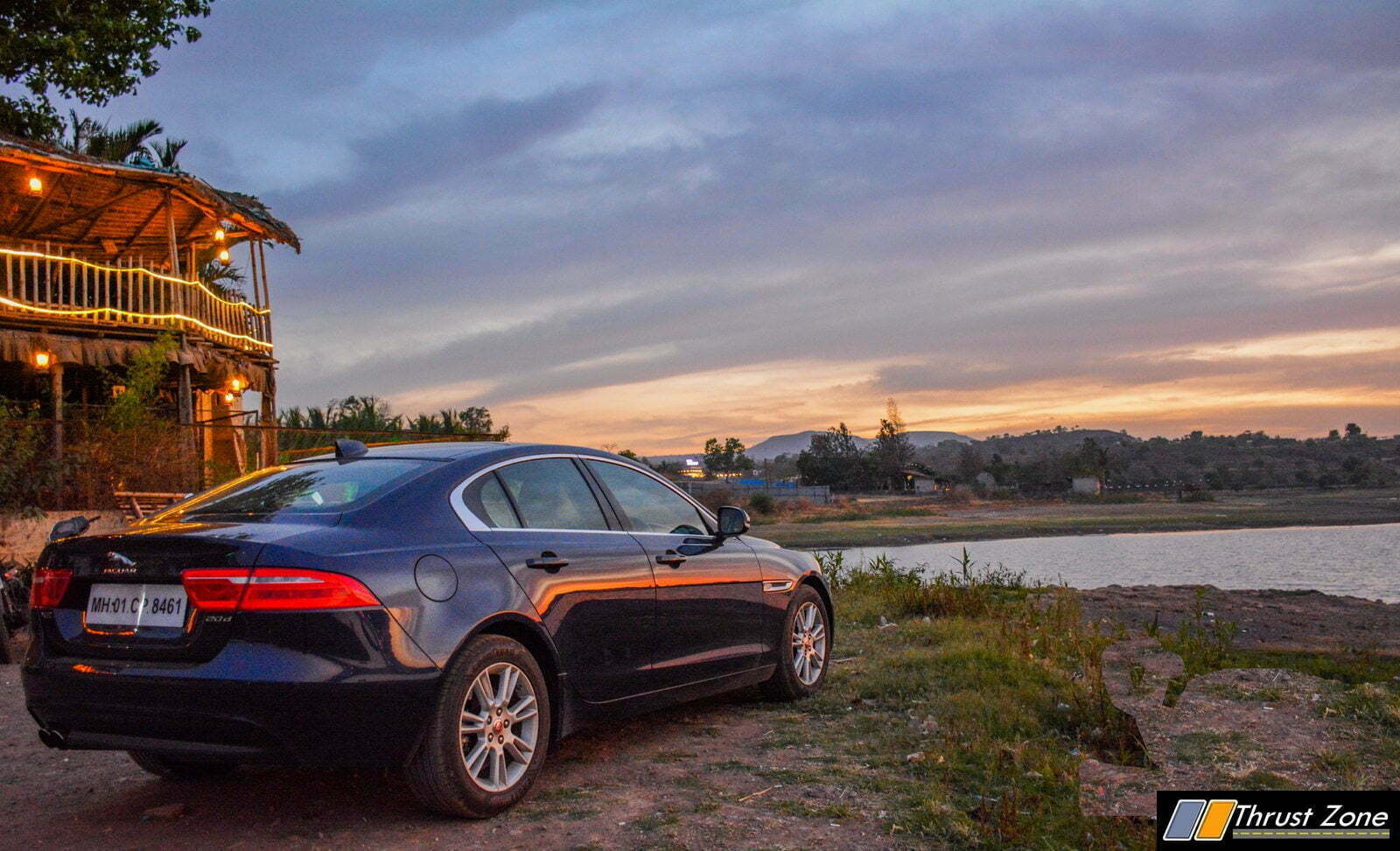 The XE diesel comes along as a good car which is great fun to drive and now comes with the diesel fuel, the preferred choice in the Indian market. The XE has its flaws as it isn’t the most spacious, but it has the features, the brand value, the subtle and aggressive stance in design and most importantly a terrific suspension, efficient and performance packed engine. 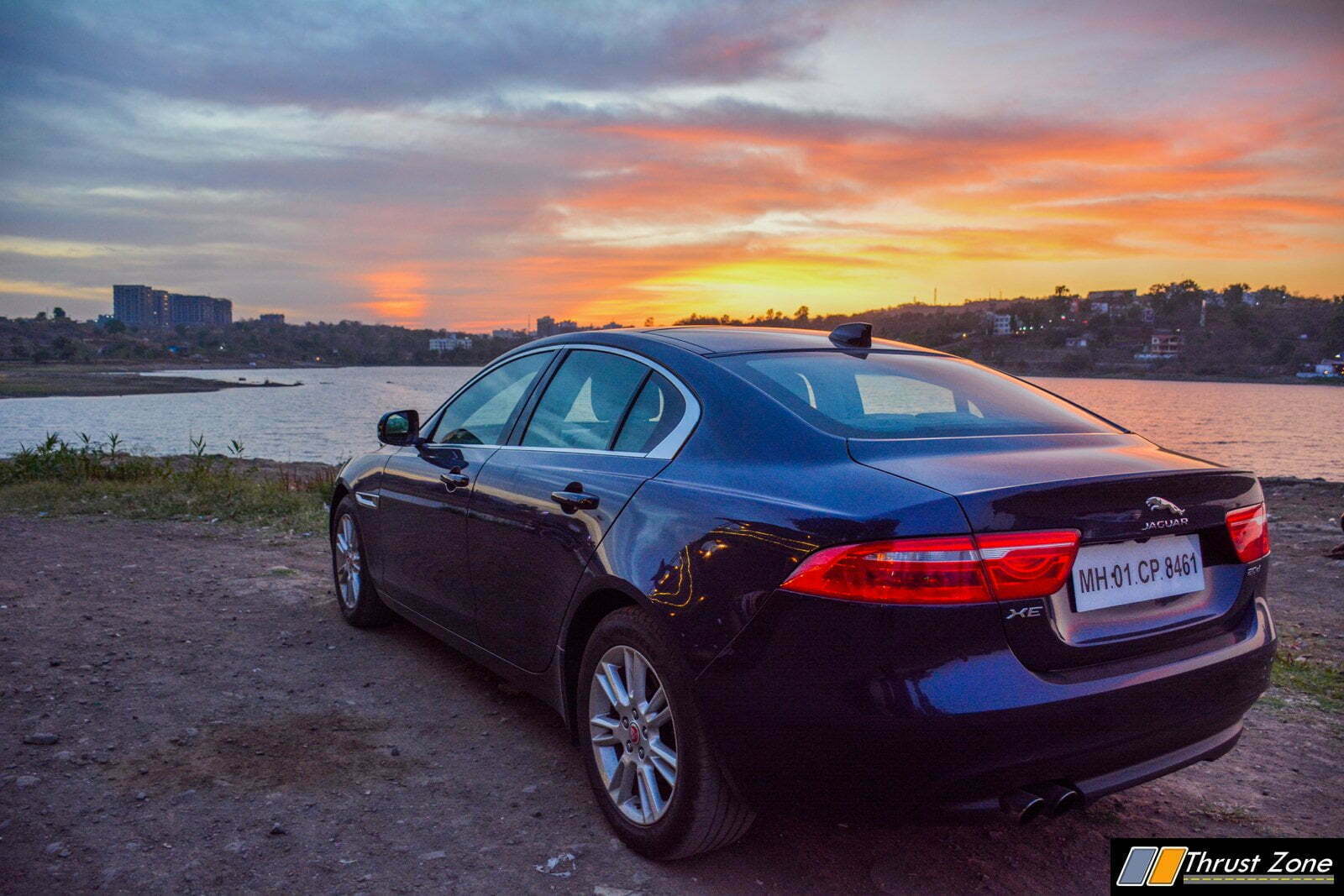 Pricing is on par as well as it retails around Rs. 38 lakhs ex-showroom Pan India. This kitty just like any other kitty will put a smile on your face and make your social media timeline look good!

Audi Electric Vehicle in India By 2020 – Cars Below A3 and Q3 Coming Soon!