Headline says it all. Reason why Toyota Innova got bigger and expensive is to make sure 2020 Toyota Rush can fill that slot and rival Marazzo, Mobilio and Ertiga

2020 Toyota Rush MPV has been finally spotted in the Indian market without any cover. The second gen of Rush will be available with a seven-seat option. Toyota hasn’t revealed any info but reports suggest that this vehicle will go on sale in India by late 2019. In terms of styling, the second gen Rush looks more like a crossover than an SUV.

The exterior of the new 2018 Toyota Rush MPV seems to be inspired by the Daihatsu FT concept. This car has an MPV like a silhouette with crossover elements such as body cladding, faux underbody protection, and raised ground clearance. This SUV gets a black grill and LED head and tail lights. Toyota has also revealed the TRD Sportivo variant which has been equipped with TRD kit. This car also features TRD badged skid plates with a dash of red paint, side molding, blackened fog lamp enclosures and TRD Sportivo badging on the rear door. This car has 17-inch dual-tone alloy wheels.

The 2020 Toyota Rush MPV G version which is the lower spec version is equipped with 16-inch alloy wheels. As far as the interiors is concerned the SUV gets a dual tone color that is black and beige. The dashboard has soft-touch materials and also the car comes with a 7-inch touchscreen infotainment system with Miracast and Web link capabilities for international spec version. 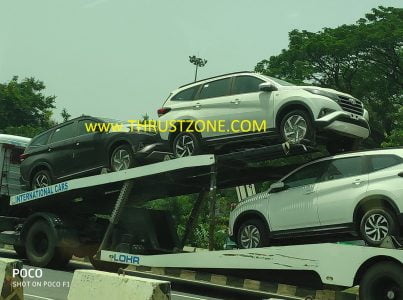 The instrument cluster gets white and blue backlight and a multi-information display which is positioned between the speedometer and the tachometer. All this till now applies for the international version. India spec in typical Toyota fashion will be revised to make it more cost efficient.

The dimensions of the new 2020 Toyota Rush MPV is 4,435mm in length, 1,695mm in width and 1,705mm in height, and has a wheelbase of 2,685mm. Under the hood is a 2NR-VE 4 cylinder dual VVT-i petrol engine that gives a power of 104ps and a torque of 136Nm. This engine is paired with 5-speed gearbox that drives the front wheels. This comes as standard. Whereas in the Sportivo variant it comes paired with a 4-speed automatic gearbox. Indian version is bound to get a diesel version which will be a 2.4 litre unit very likely with automatic and manual.

Lease A Jeep – Sounds Catchy! – You Can Now Lease FCA Products In India