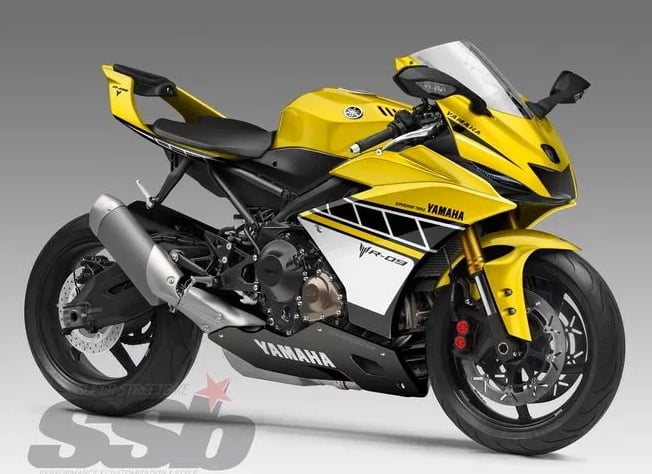 2018 Yamaha YZF R-09 Could Come To EICMA and if it does then the Ducati 959 Panigale and Triumph Daytona are going to have a good time challenging each other!

SuperStreetBike.com has executed a concept motorcycle, named as the 2018 Yamaha R-09. The bike is said to borrow is underpinnings from the 2017 FZ-09. The Yamaha R-09 would make 135 bhp from the FZ-09’s 847 cc in-line 3 cylinder DOHC engine. The triple cylinder induction grunt remains the same but the engine would be tuned for more power. The headlight portion has been designed quite like the YZF-R6 and the side fairing looks like a shark fin giving the superbike a smoother can cleaner stance. The belly carries a different fairing and the pillion seat is bitty which is not a good news for pillions and is only suitable for short rides.

The Yamaha YZF R-09 concept borrows its cycle parts like the wheels, suspension and brakes from the Yamaha R6. The front brakes are slotted instead of drilled. Suspension bits on the R6 include 43mm KYB 3-way adjustable inverted front fork. The rear comes with a KYB 4-way adjustable monoshock. The bike features a longer swingarm for better control and preventing wheelies. The production version of this prototype will fill the gap between the R6 and the R1 giving buyers an option from choosing among the three beautiful machines.

Yamaha’s naked FZ-09 is one of the masterpiece in its current model line-up. At the heart of the bike sits a 847 crossplane triple, which is loaded with mid-range and top-end power for sure, which does not fail to keep the rider busy and in joy. The 115 hp power is so good, that it would be the icing on the cake if fitted in a sportnike chassis, that’s the whole idea of potraying this virtual picture.

The Yamaha YZF R-09 if comes into life will rival against the astonishing Ducati Panigale 959. We guys know how excited you guys are after reading this, whether this bike will come into production or not, thanks to this pretty tempting virtual images of the bike. As for now there is o official word of Yamaha producing the faired version of the FZ-09. The on going naked beast retails in UK at GBP 7,999, On The Road.