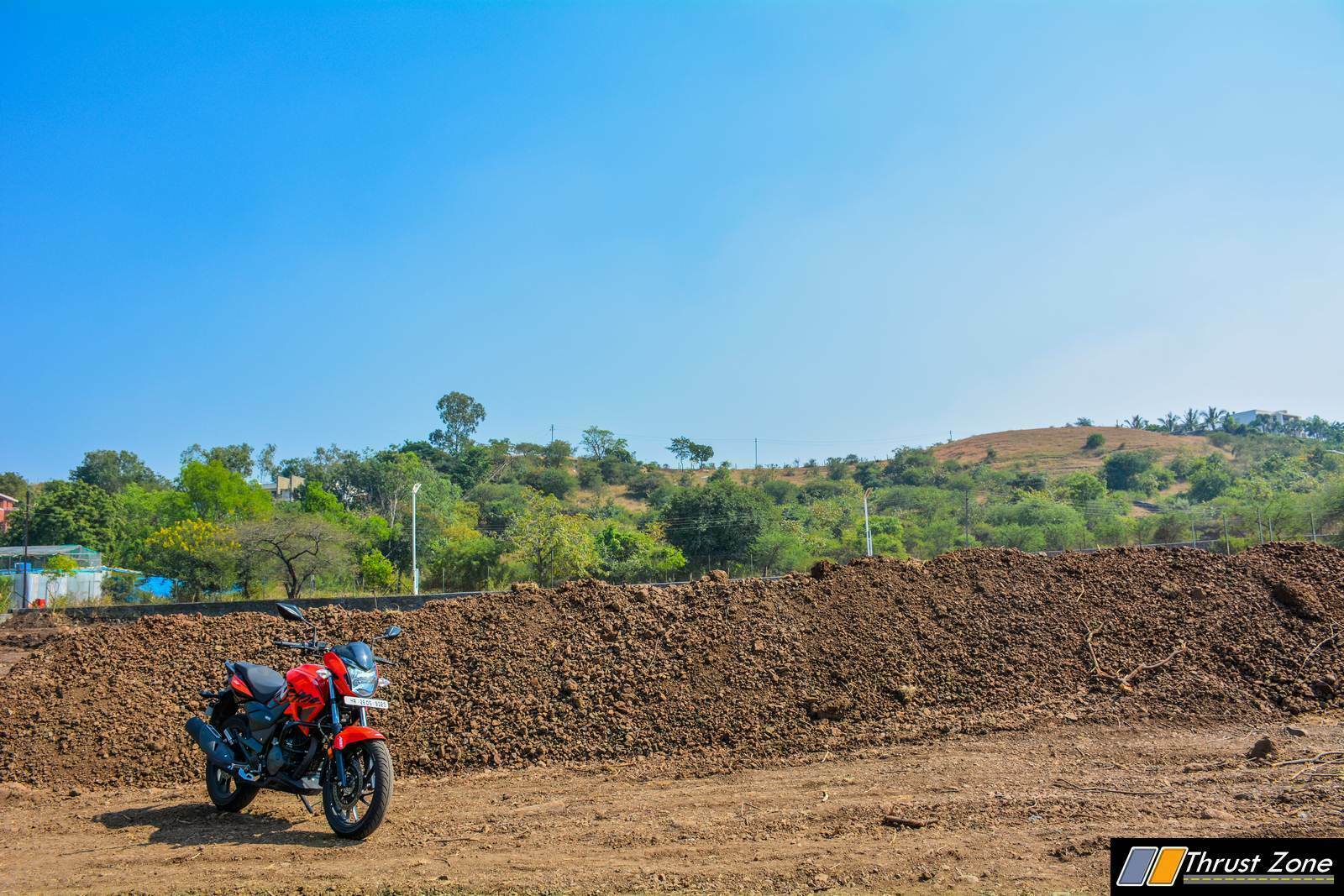 Back in the days, when Hero collaborated with Honda, together they had launched the CBZ and that led to a revolution in the Indian motorcycle market. During that time period, the 100cc fuel efficient motorcycles were on the roll and with the launch of the CBZ Xtreme it helped in changing the whole scenario of biking in India. Well, that’s almost 20 years back and back then the Hero Honda CBZ used to be powered with a 150cc engine. Slowly as the competition grew in with Bajaj launching the Pulsar series, Hero Honda began upgrading the CBZ and we then saw the CBZ Extreme series. Now after so many years, Hero MotoCorp has now upgraded this bike and has launched the Xtreme 200R. 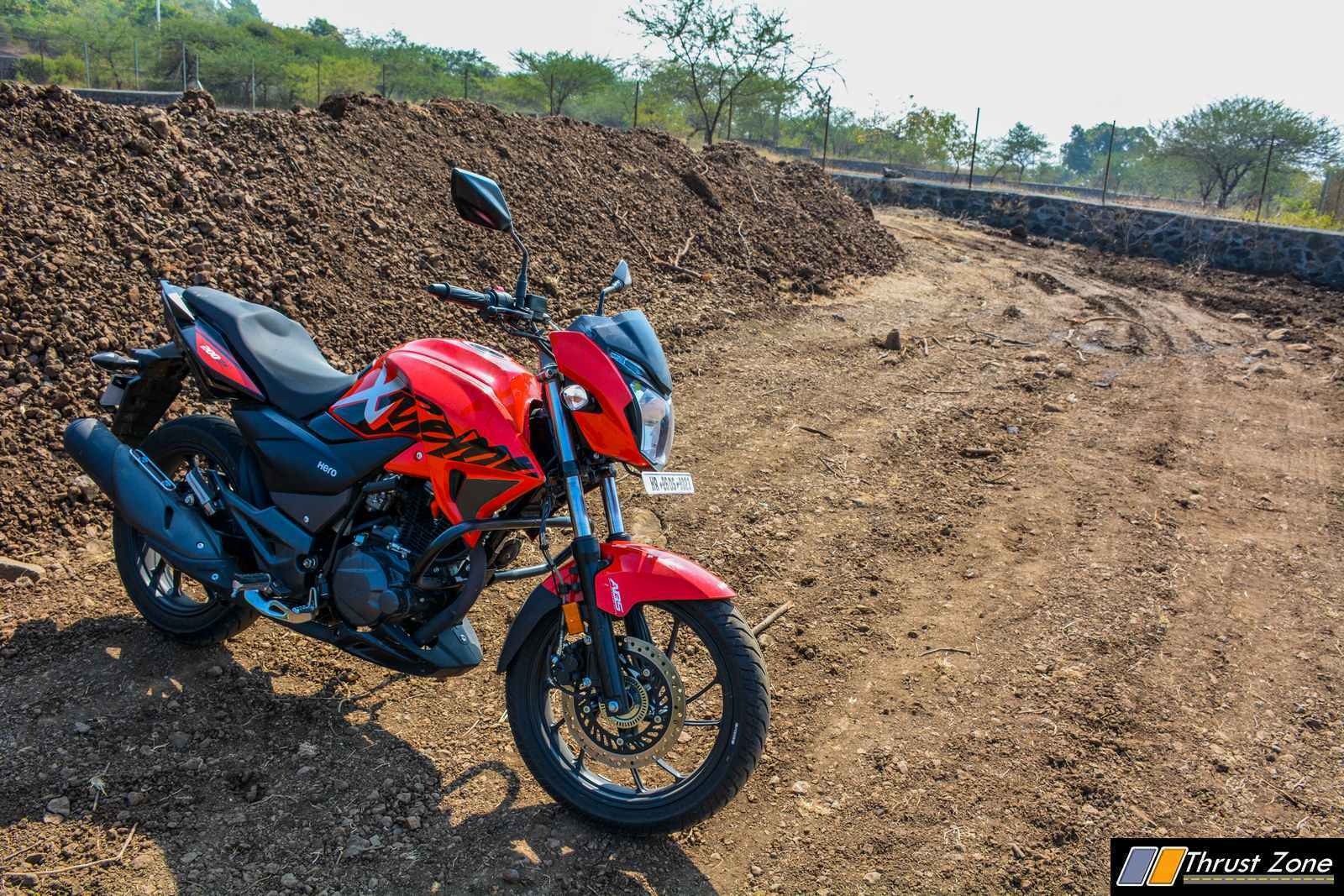 The design of the Xtreme 200R is quite sporty with the muscular fuel tanks and it also gets an aggressive look with the neatly designed tank shrouds. But up front, the headlight section with the two eyebrows shaped LED lights look a bit off beat and doesn’t compliment well with the overall sporty fit and finish of the bike. The instrument cluster gets an analogue RPM meter with a part digital unit having a white backlight that showcases the digital fuel gauge, speed, two trip meters, and a service reminder indication. Overall the cluster looks a bit generation old and it also doesn’t get a gear position indicator as well. 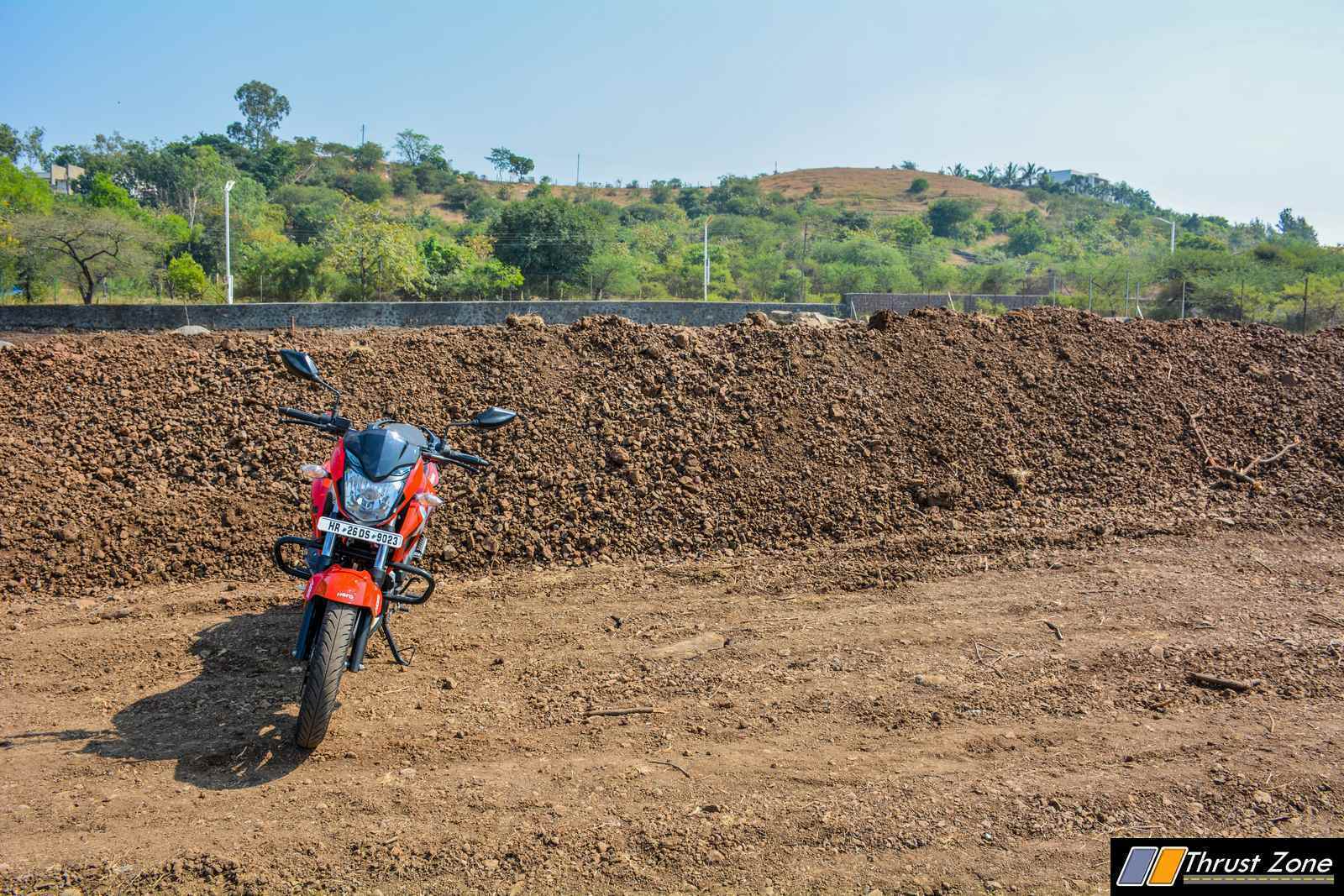 Moving towards the rear, the design of the tail section is quite catchy with the tapered tail section, it holds an LED tail light unit and split grab rails. Although the muffler is quite big and fat, the design of it could have been enhanced. The lower end of the fuel tank gets the Xtreme graphics and it also gets a neatly designed engine cowl panel which could be appealing for the youth 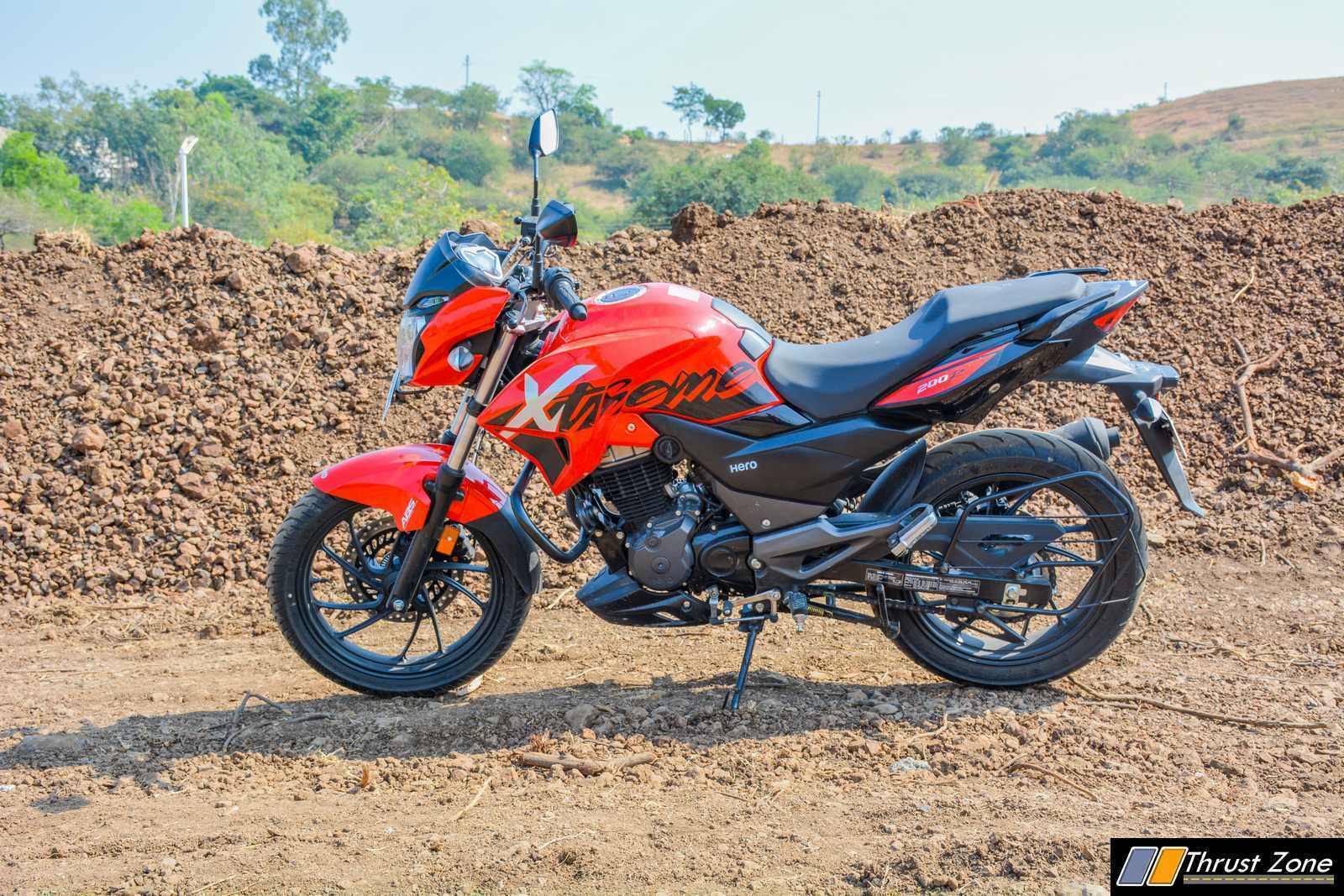 The seating position on the Xtreme 200R is quite high with the handlebars set a bit low. As a result, once seated your thighs will be neatly tucked around the fuel tank. The seat height is a bit high for shorter riders but manageable. Hero has provided the Xtreme with a hard seat material which gets quite uncomfortable though while riding in the city in traffic. This means it is great for long distance touring and the seat will settle down well in time. 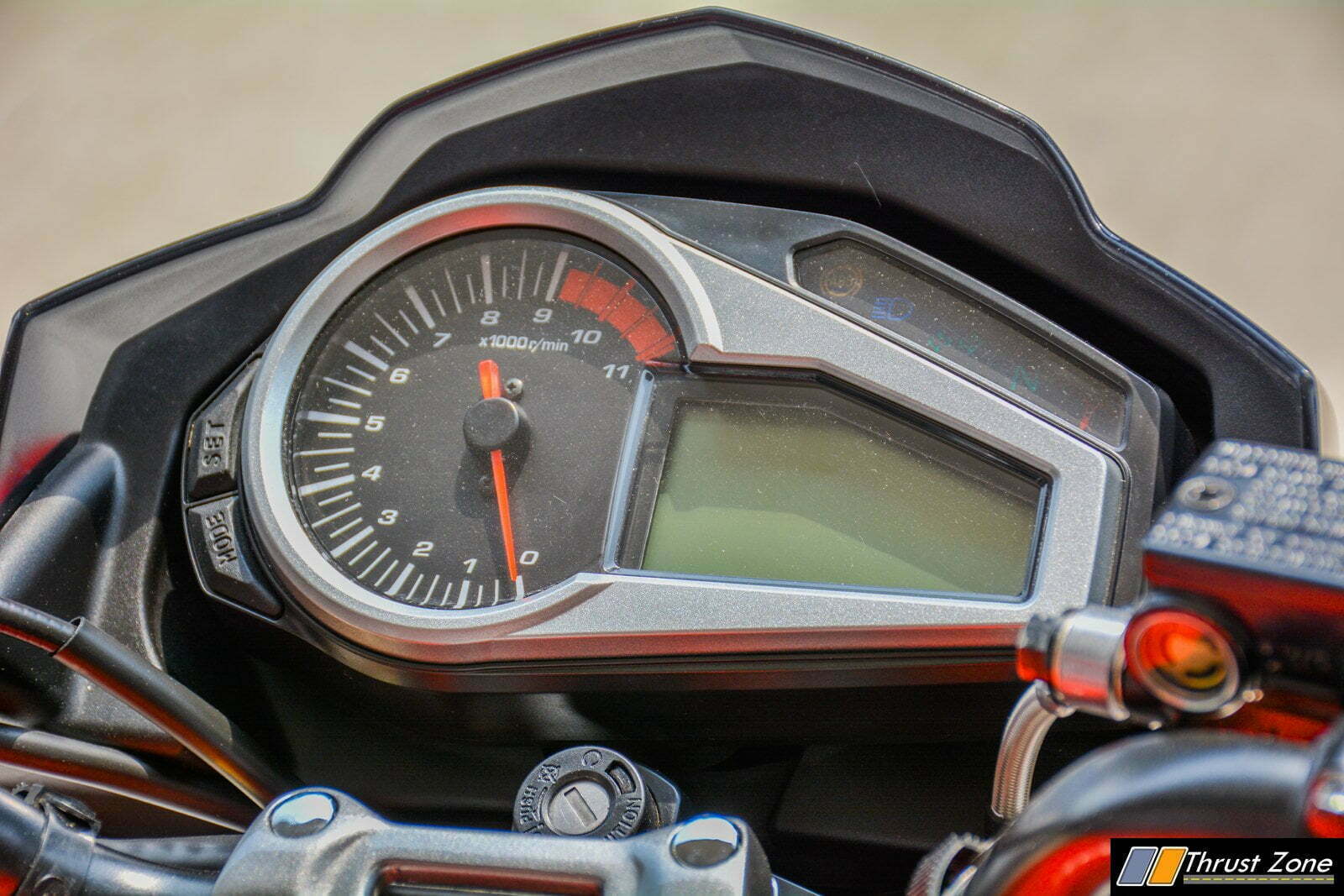 Also at the handlebars feel quite heavy but once on the run, it loosens up. The switches on the handlebar are made up of good quality materials, also, these switches are very easy to access. Hero has provided the Xtreme 200R with a single seat but the padding on it is hard. On the other hand, the pillion seat seems small but is quite accommodating. Mirrors are positioned a bit high and this helps in giving a clear what’s behind. Also, the mirrors do not vibrate much on high speeds. 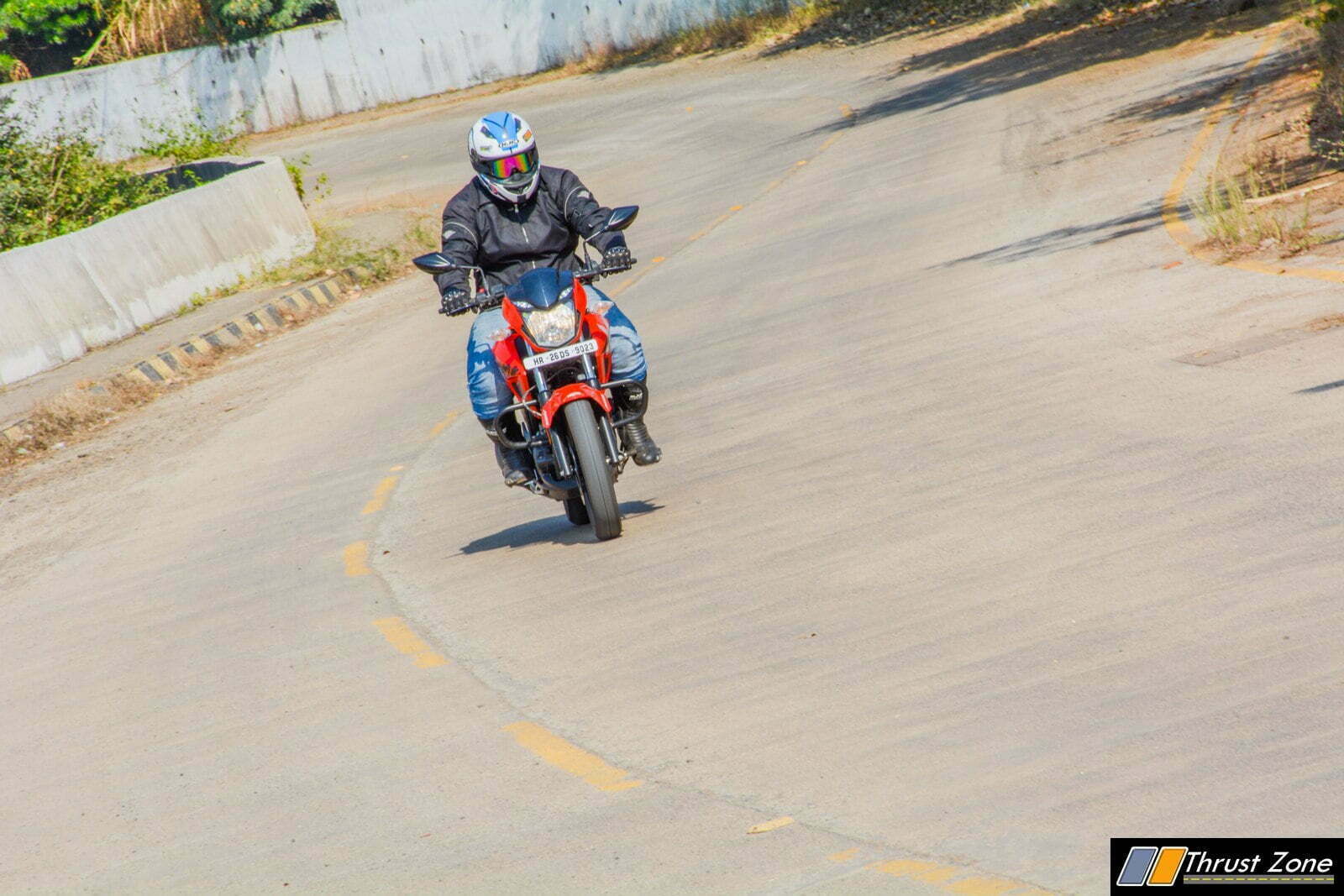 Powering the Hero Xtreme 200R is a 199c, single cylinder, air-cooled, a carbureted engine that is mated with a five-speed transmission. This unit produces 18.1 bhp of power at 8,000 rpm and 17.1 Nm of peak torque at 6,500 rpm. In comparison with its rivals in the 200cc segment, these power figures might not be the highest, but the refinement of this motor is a lot better. Although The vibrations start kicking in past 8000rpm but they are manageable. 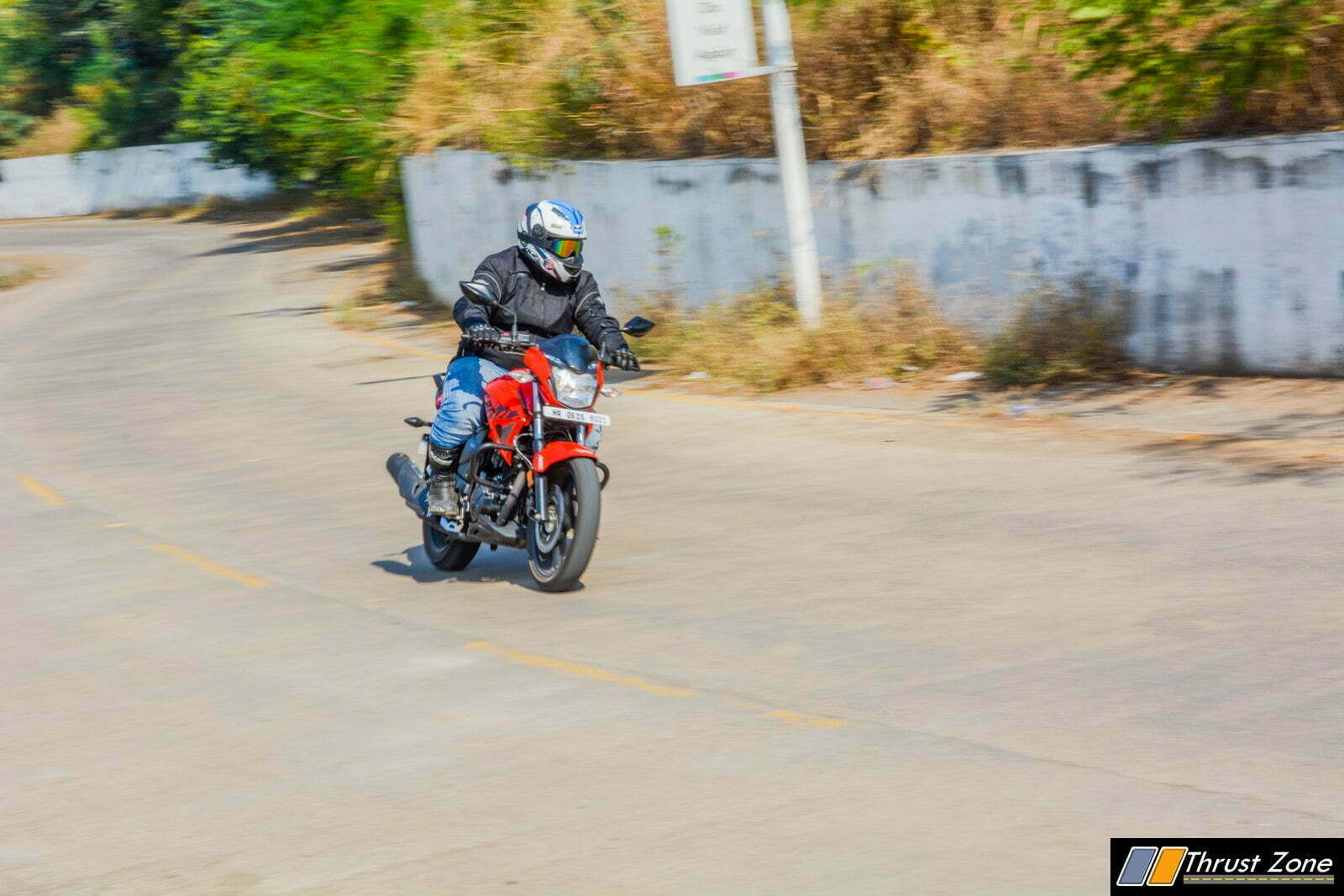 Once you open the throttle, the bike feels peppy and it also gets an engaging exhaust note. On the other hand, the gear shifts on the Xtreme 200R is quite smooth with the one down four up gear positions and finding the neutral position is also not a hassle. 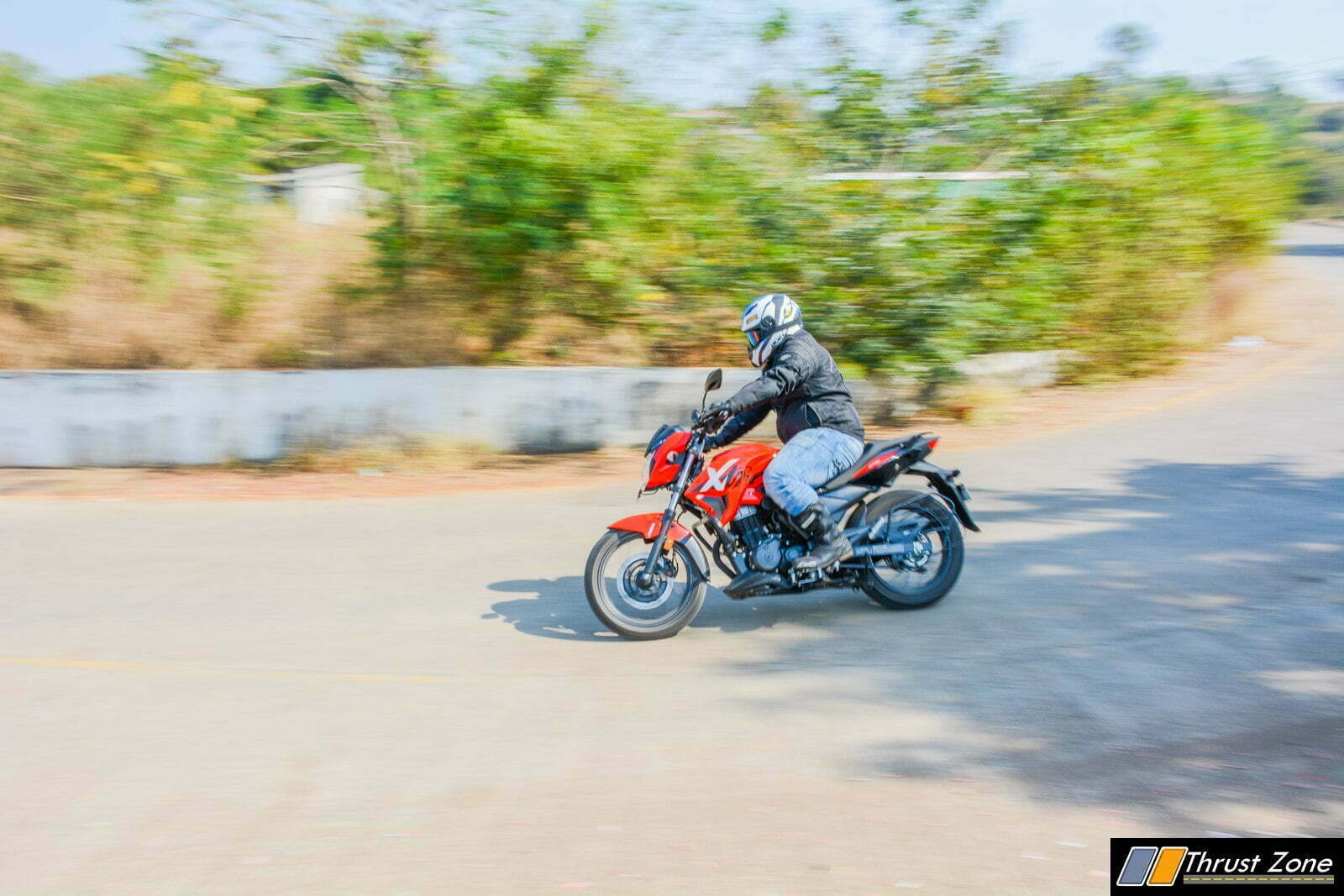 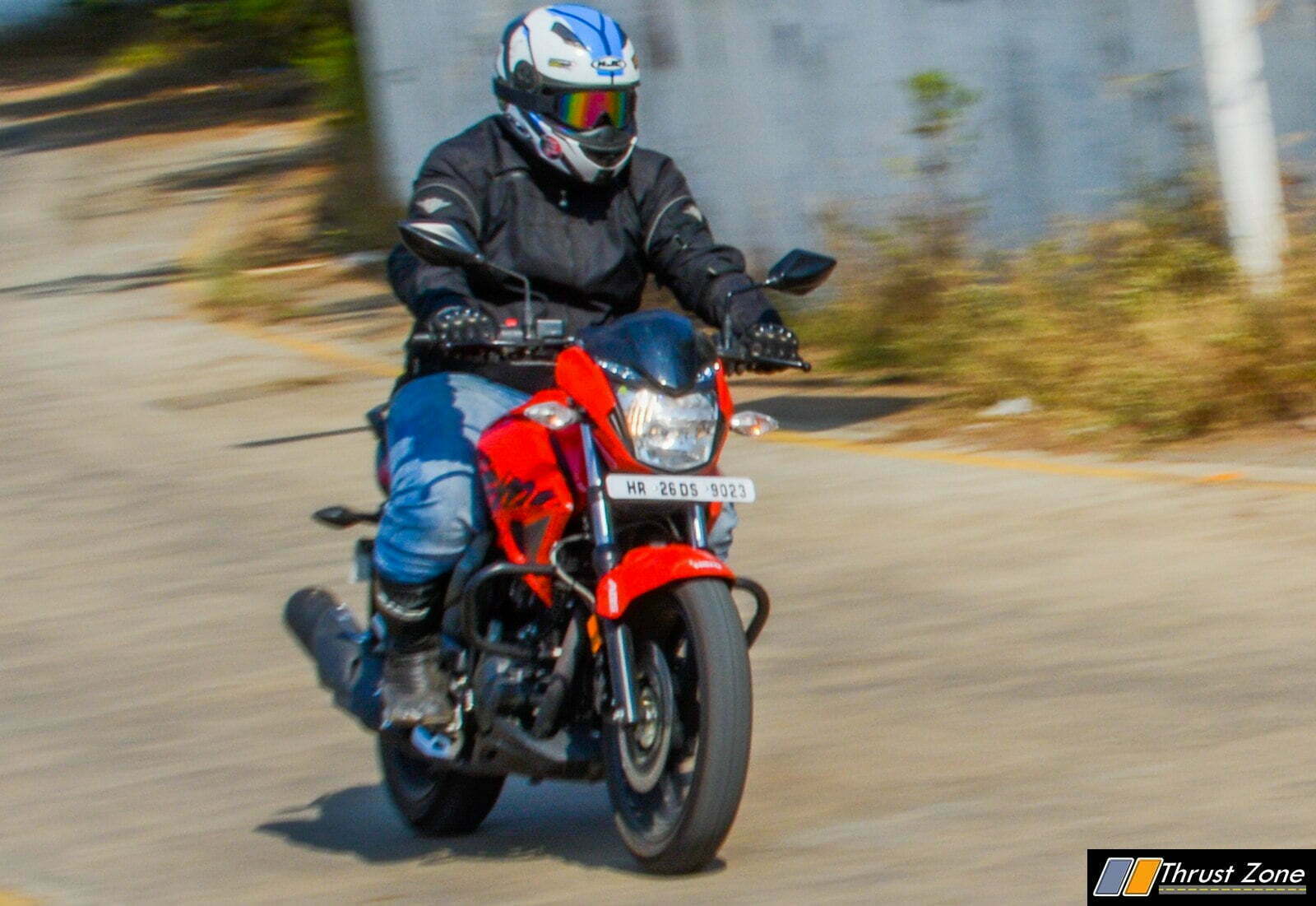 Riding the Xtreme 200R in the city is an ease, with all the tight traffic it isn’t a pain to manoeuvre around as well. Also, the suspension on it isn’t quite stiff or soft, it perfectly absorbs the bumps on the road and the massive and oddly shaped speed breakers without giving many jerks on your back and wrists. This is where the Hero scores. Smallest wheelbase in its class and above means its fun to ride and chassis setup is extremely ideal for our streets. 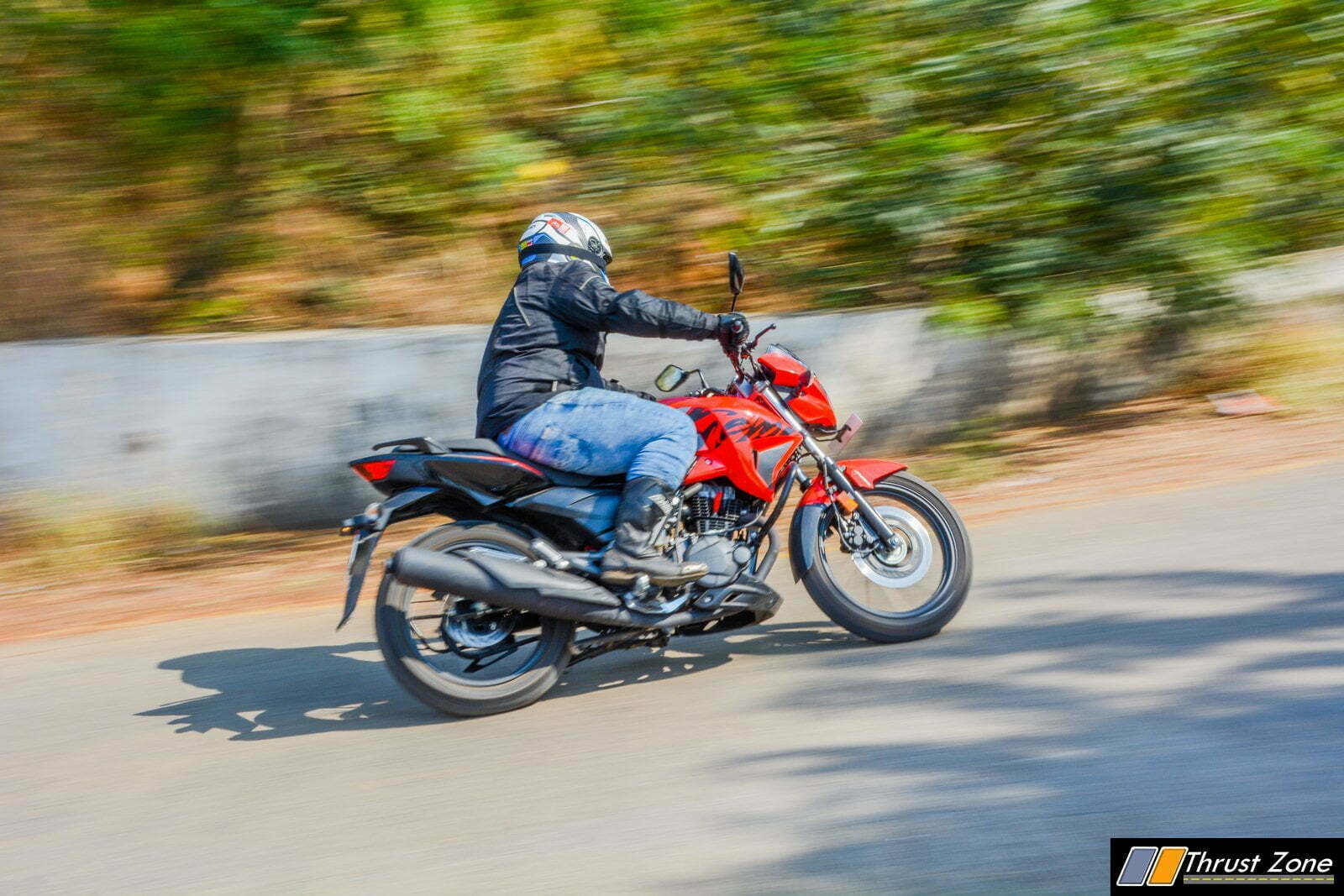 The braking duty is taken care by a 276mm front disc and a 220mm rear disc with a single channel ABS unit as standard. The feedback from the brakes and stock tyres were excellent and it doesn’t feel like the brakes fade out even on high speeds 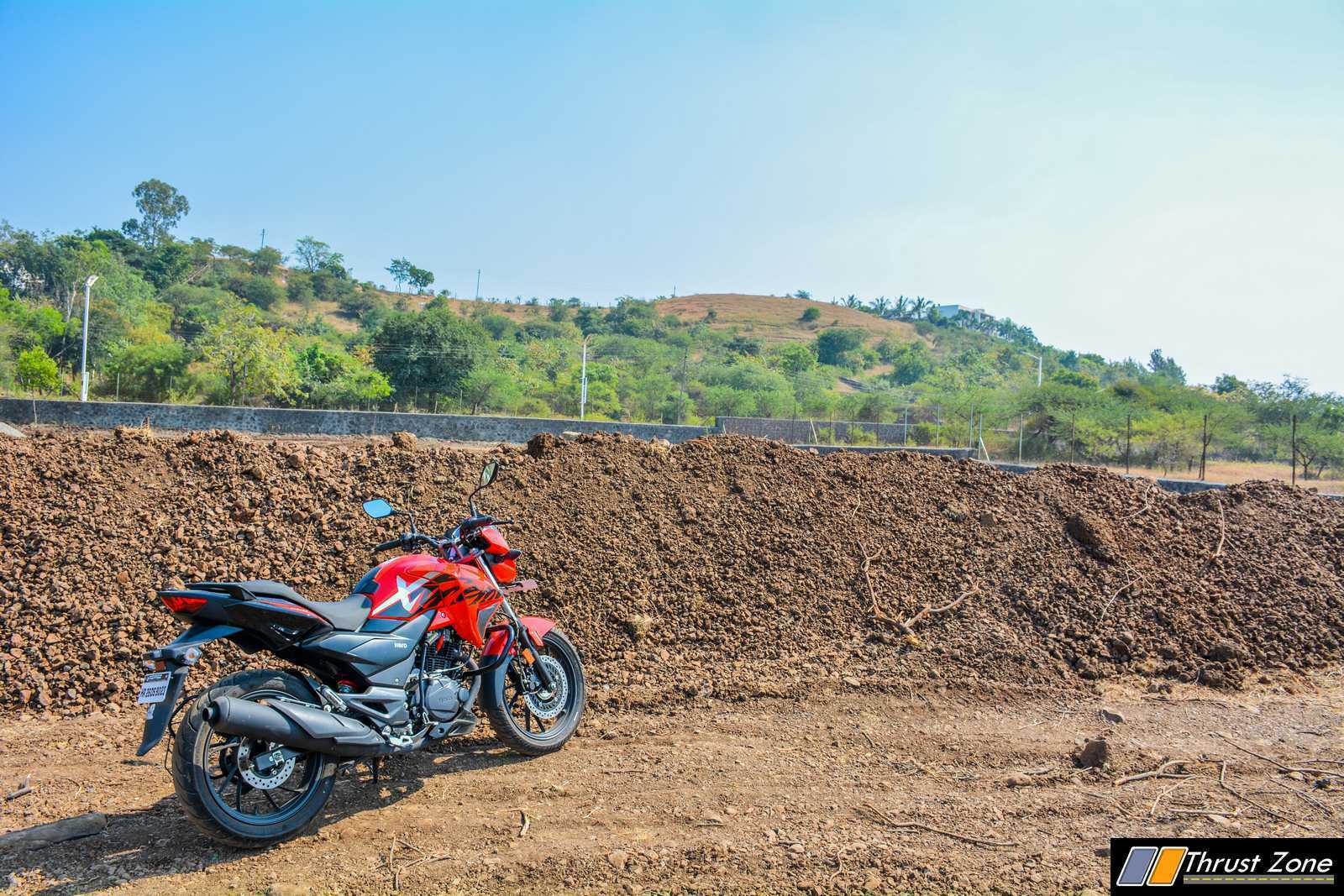 With the Xtreme 200R, Hero has made a good attempt once again in the 200cc segment. Although the power figures are not as high as its competitors, the ride quality and handling make up for it. Hero has offered the Xtreme 200R with a smooth and peppy engine and sleek gearshifts and low vibrations. The one thing that itches all of us is that one line, “Kitna Deti Hai’, and with a good combination of performance and fuel efficiency delivers is about 38.9 kilometres per litre which is quite good in comparison with its rivals. In terms pricing, Hero hasn’t disappointed us and it offers a competitive price tag in accordance with the competitors in this segment and even takes down rivals from the segment below and in return offers terrific value for money.