2019 Honda City Facelift Review: All Changes Over The Previous Version 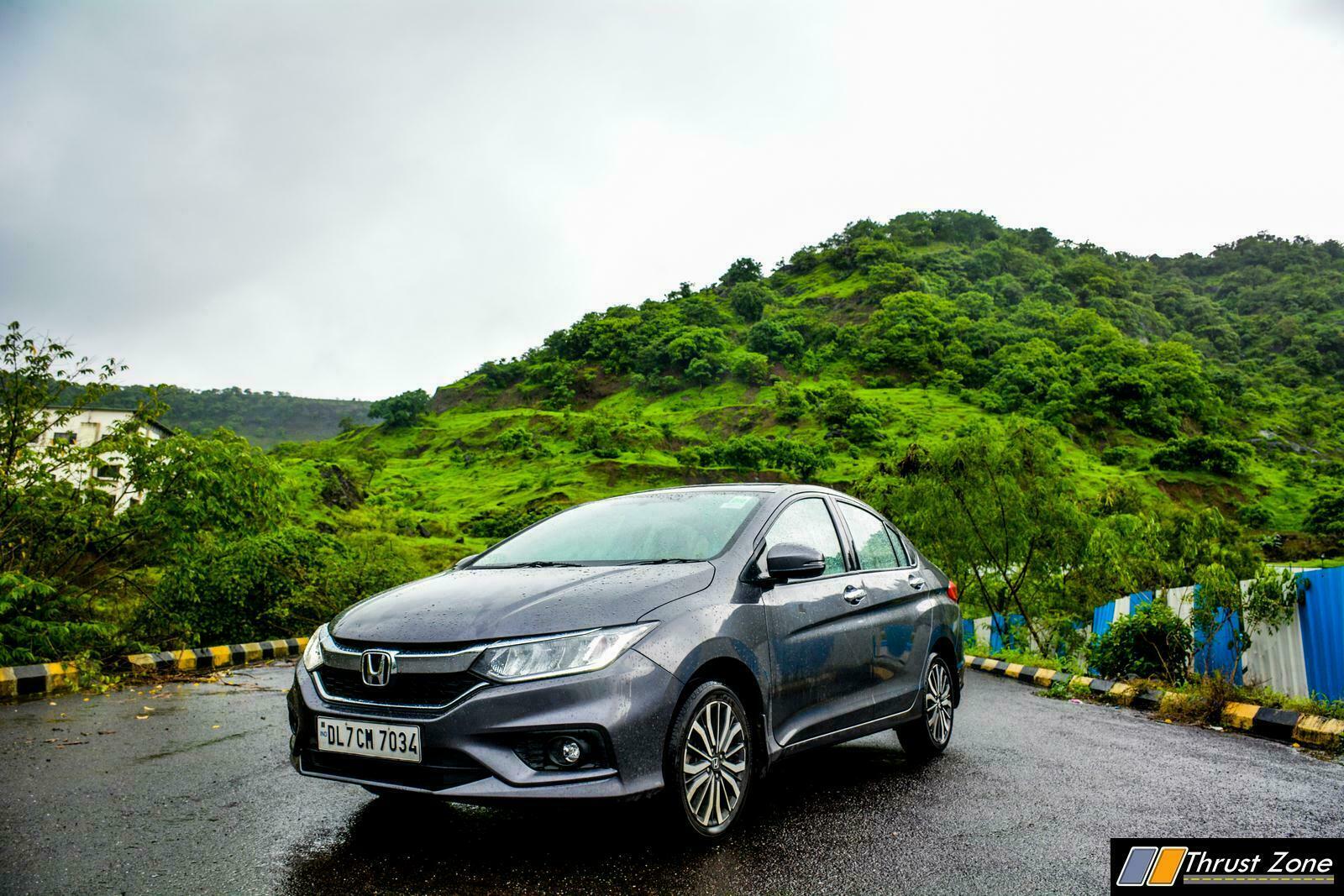 Honda City continues to remain one of the best selling midsize sedans in the Indian automobile market. Honda launched City’s 6th generation in India in 2014; however, given the high intensity of the competition the sedan faced from rivals, Honda has decided to come come up with facelift version of City. The new model comes equipped with a host of exterior and interior changes and this piece of writing is going to acquaint you with what has changed on new Honda City. 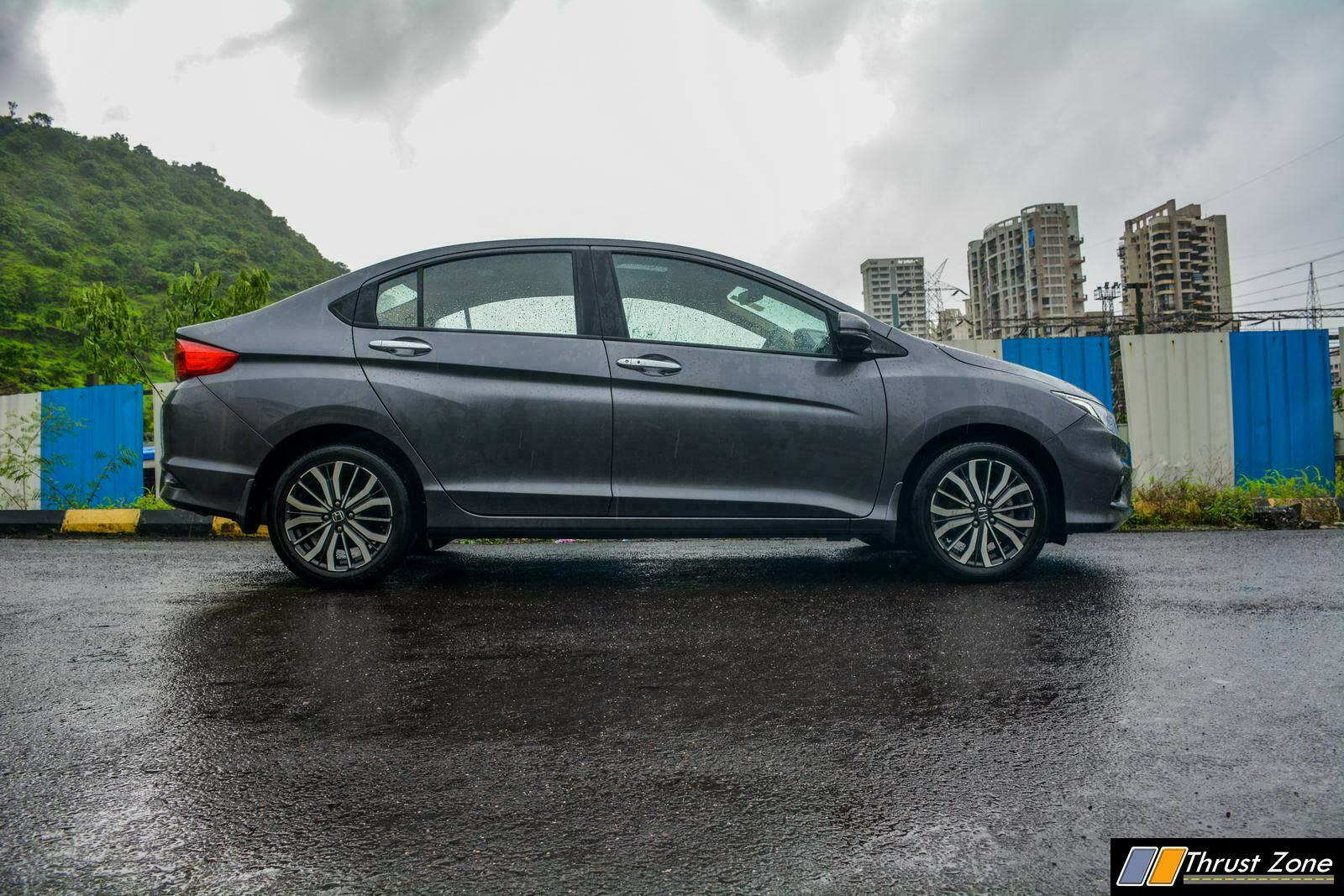 Exterior changes: Honda has made a comprehensive effort to redesign the frontage of the car with the new city getting slimmer chrome grill and dynamic fog lamp housings. However, the most prominent change manifest in the form of new LED headlamps and clusters now also feature LED DRLs. The profile of the car remains identical to the outgoing model with the only noticeable difference being the 16” diamond-cut alloy wheels. At the back, the bumper has received honeycomb inserts which compliment newly incorporated dynamic tail lamps. 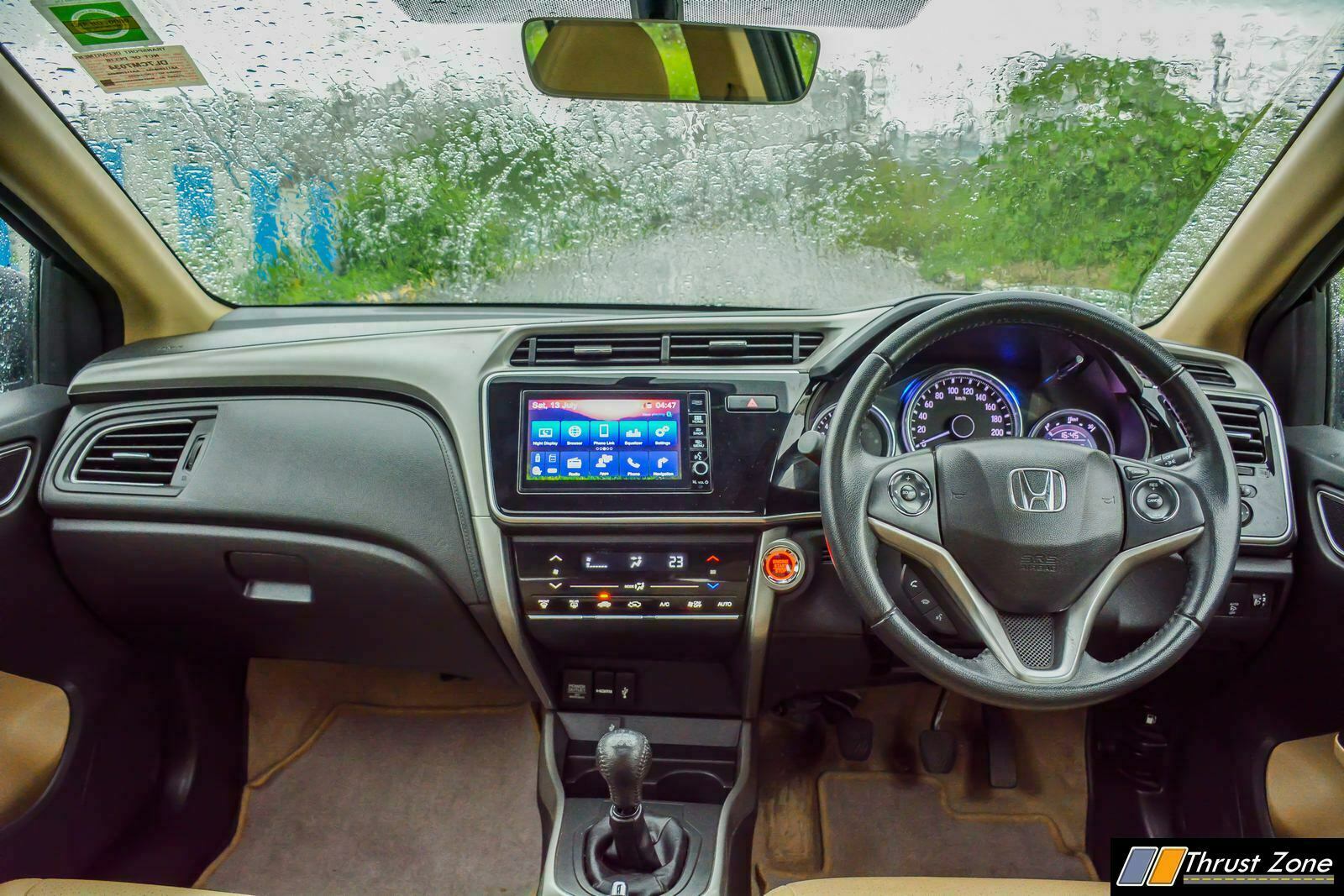 Interiors Changes: Inside the cabin, the changes are quite minimalistic with the overall design and layout continues to remain similar to the older version. However, the new city has now got a large touch screen infotainment system which also boasts Mirror Link connectivity. To further enhance the practicality of the cabin, the new City comes with LED map and interior lamps. Safety factor, on the other hand, gets a big boost in the form of side and curtain safety airbags, a rearview camera with multi-angle settings, and vehicle stability assist system. Rest of the feature list stays the same as the earlier car. 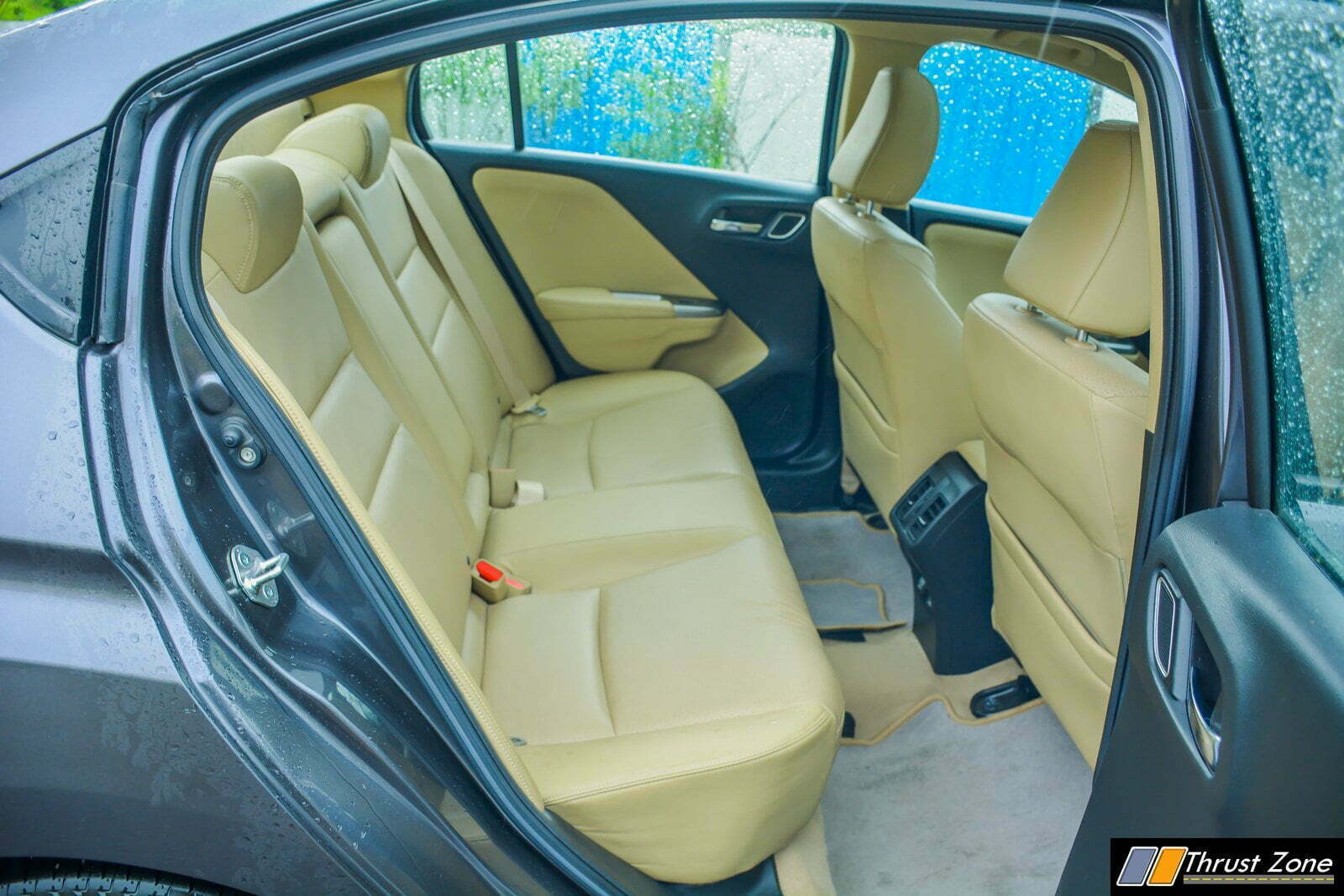 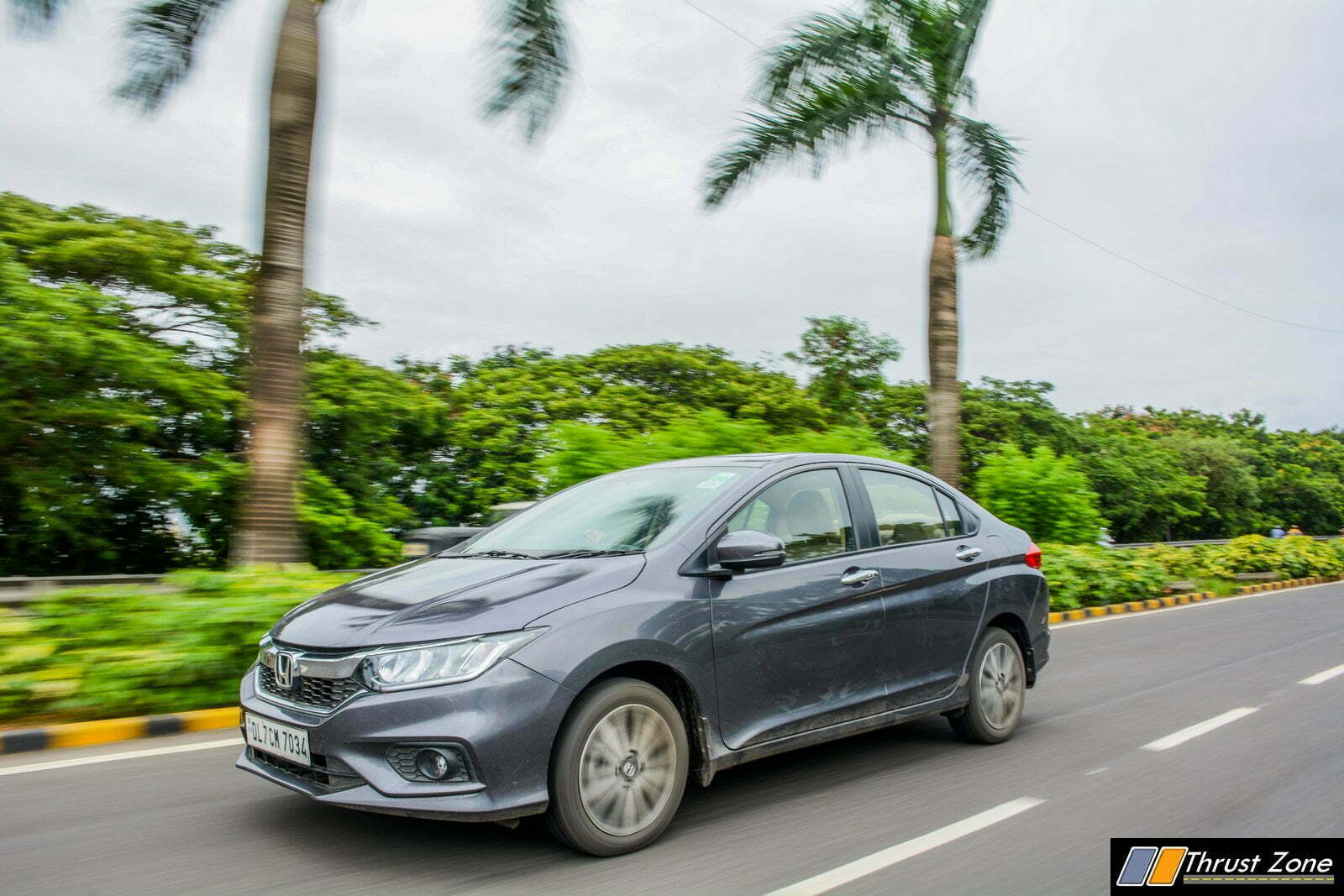 Engine and Transmission: The engine and transmission options have been carried over which essentially means you get the option to choose from a 117bhp/145Nm 1.5-liter i-VTEC petrol engine mated to a 5-speed manual and CVT transmission and 99bhp/200Nm 1.5-liter i-DTEC diesel engine coupled with a 6-speed manual gearbox. The car continues to feature a nice combination of ride and handling with latter being slightly prioritized over the former. 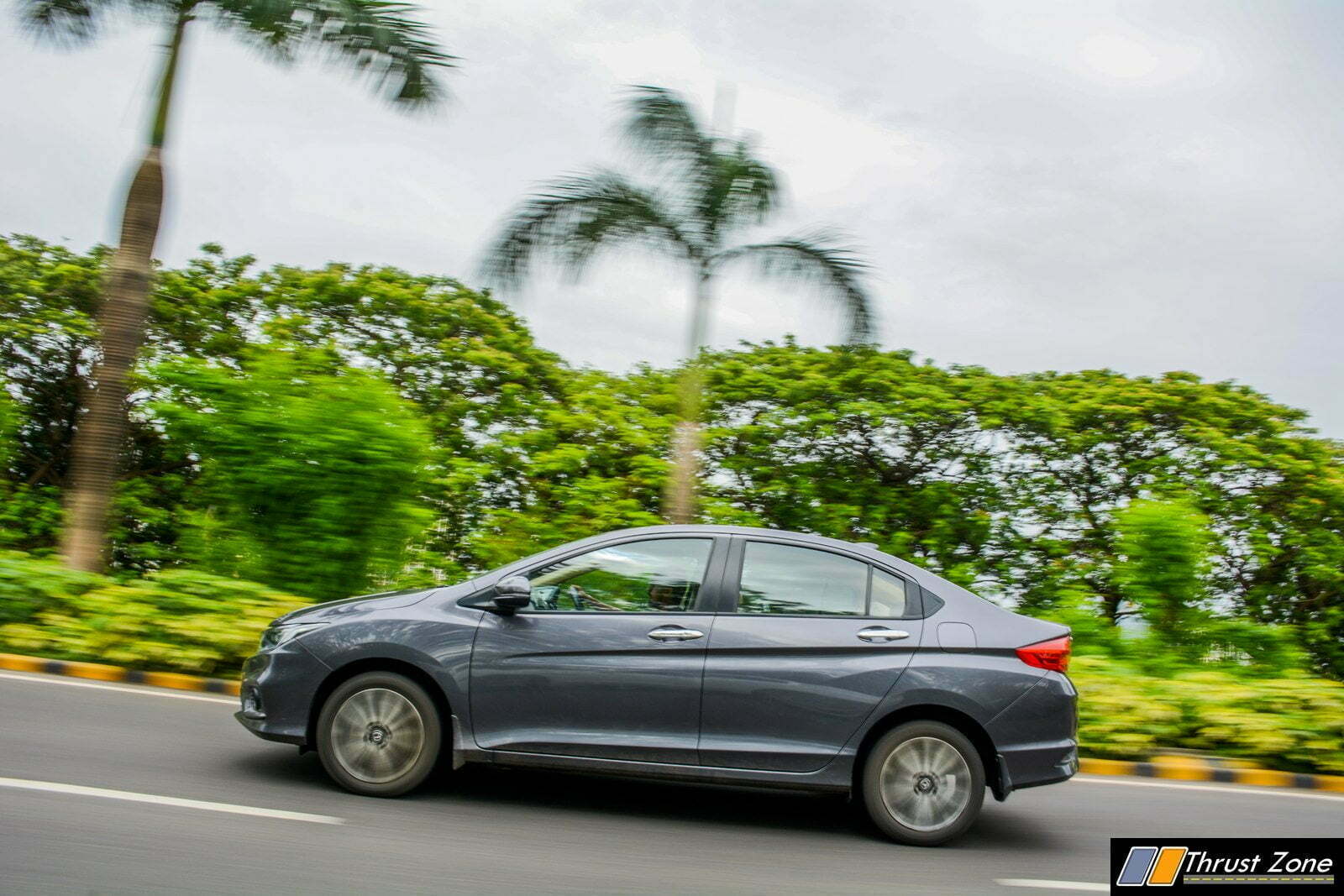 The Drive: Honda was kind enough to send us petrol and diesel test cars for this story. The petrol motor is a gem as always with redlines till 7000 RPM and makes a lot of power post 4500 RPM when the VTEC kicks in (yo). The car is capable of doing 160 km/hr in fourth gear and 120 in third gear and this clearly shows its tall geared and top-end performance is brilliant. The driveability in the city in lower RPM and gears is alright but to really go you have reach above 4500 RPM. 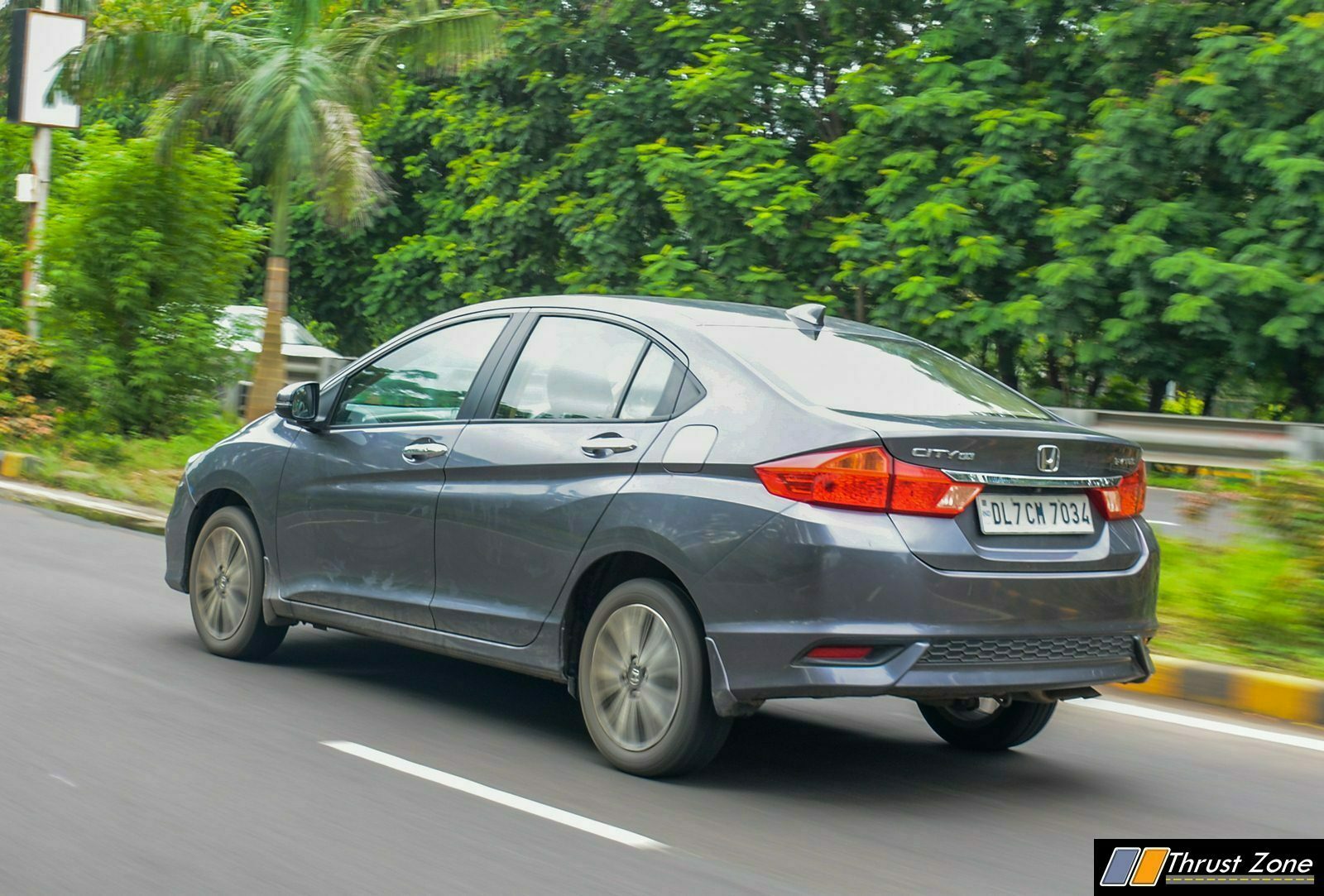 The NVH levels are good enough at most of the times, but when it redlines it sounds like muted F1 motor for the road and it is loud at the same time. Enthusiast will love it, most drivers won’t. A fuel economy of 9 km/l in the city 12 km/l on the highway is what we saw. You can extract a bit more because we had a heavy foot. Clutch was light, gearbox was smooth and slotted well. 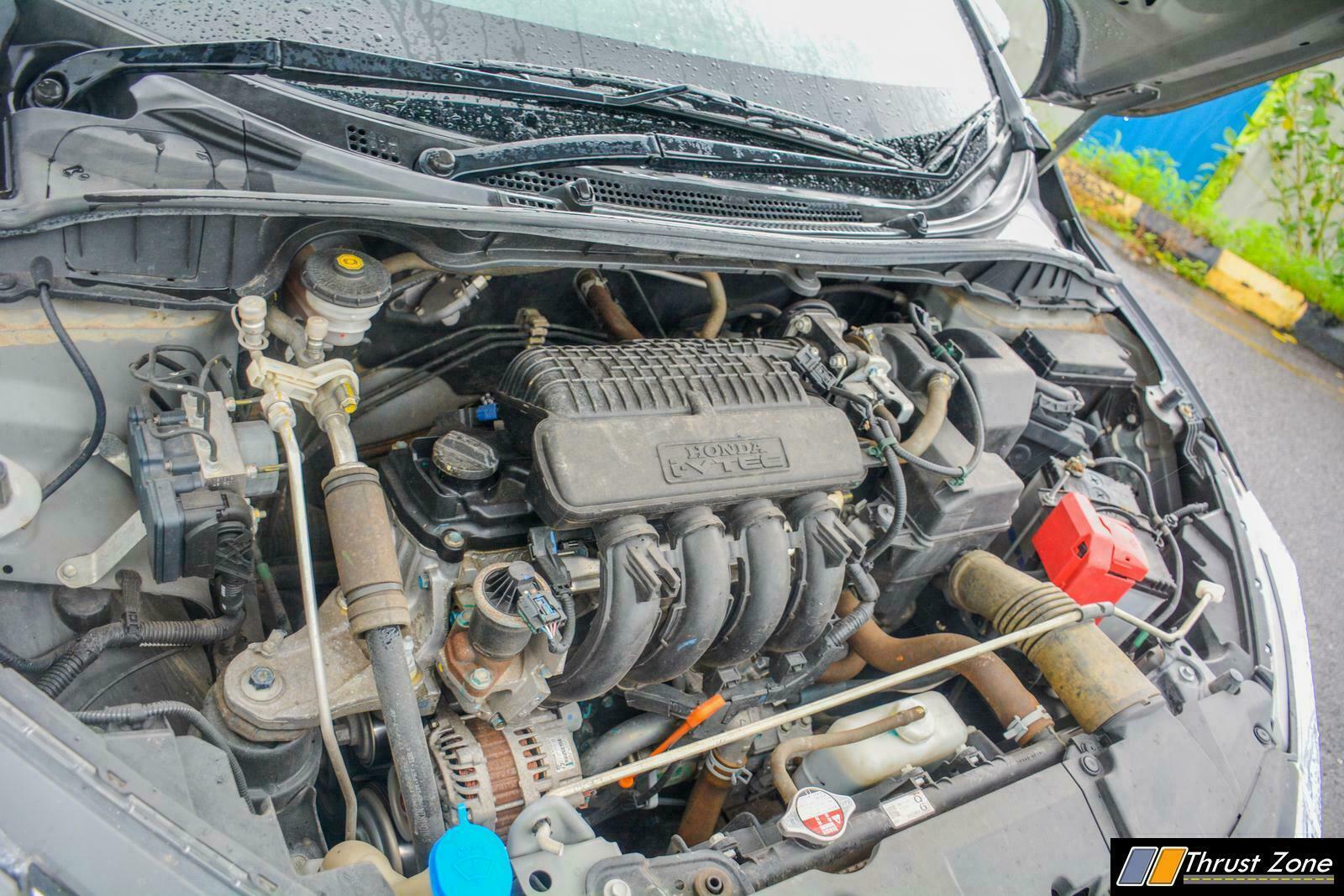 The same case was with the diesel but the motor is more torquey at low and mid-range lacks top-end power. The power is abruptly cut, almost, around 4000 RPM. You have to go up the gear quickly to make fast progress. On the highway, the fuel economy because of this is stellar. We got an impressive 24 km/l. In the city it delivered 16 km/l. Overall economy was 21 km/l. The engine is noisy at idle and while accelerating and slightly while cruising, but the benefits to that is the segment highest fuel economy and city driveability. 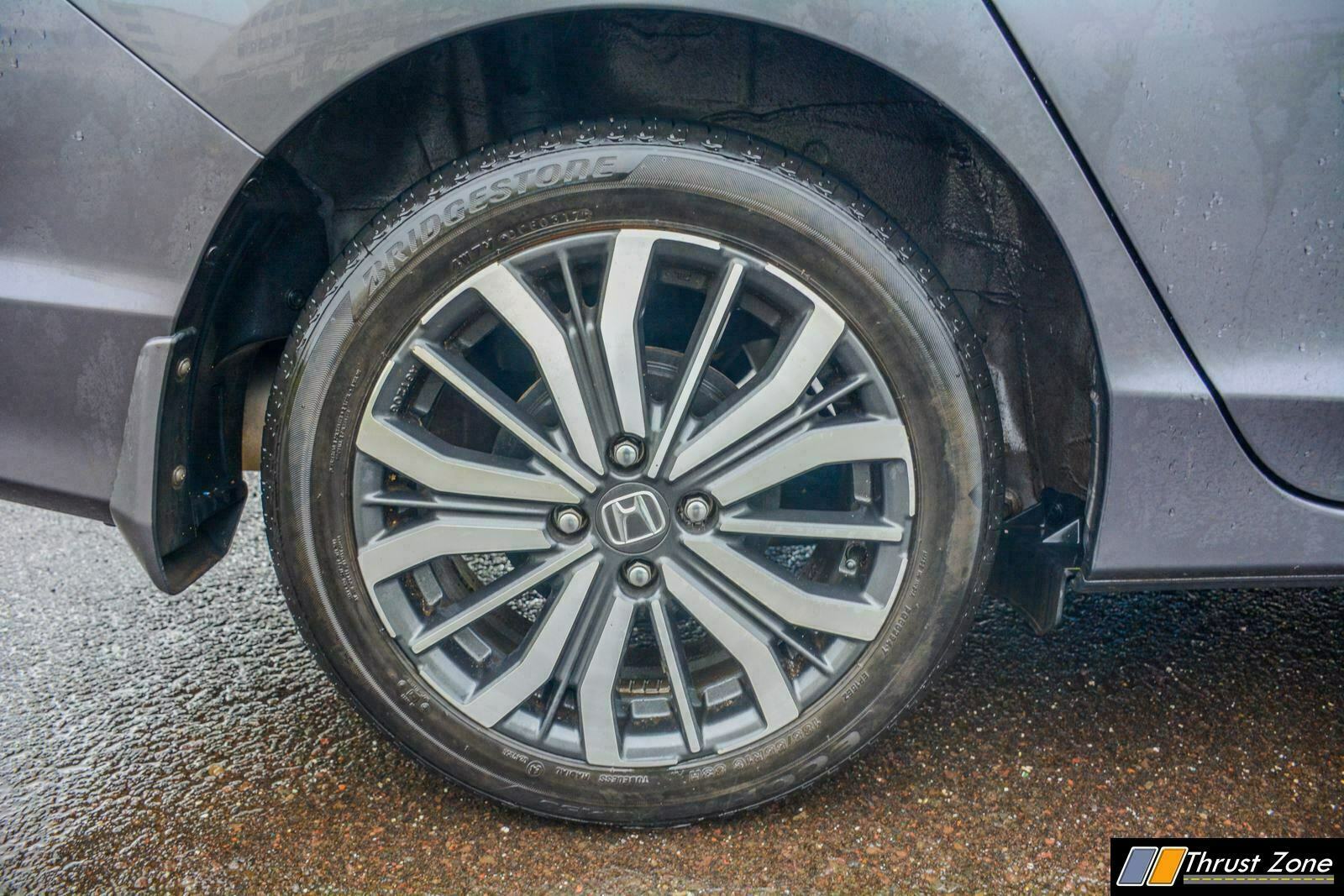 Dynamically, the steering offers just about adequate feedback, but weighs up properly on the highway. The precision and lightness makes it easy to live with in the confines of the city driving. Grip is good, but could be better amid 16-inch wheels, the tyres are still narrow. The brakes are good enough with excellent pedal bite and good progressive power. Body roll is minimum and agility in the corners is good with just about good enough highway stability. Ride quality then becomes very impressive, but there is a bit of underlying stiffness. 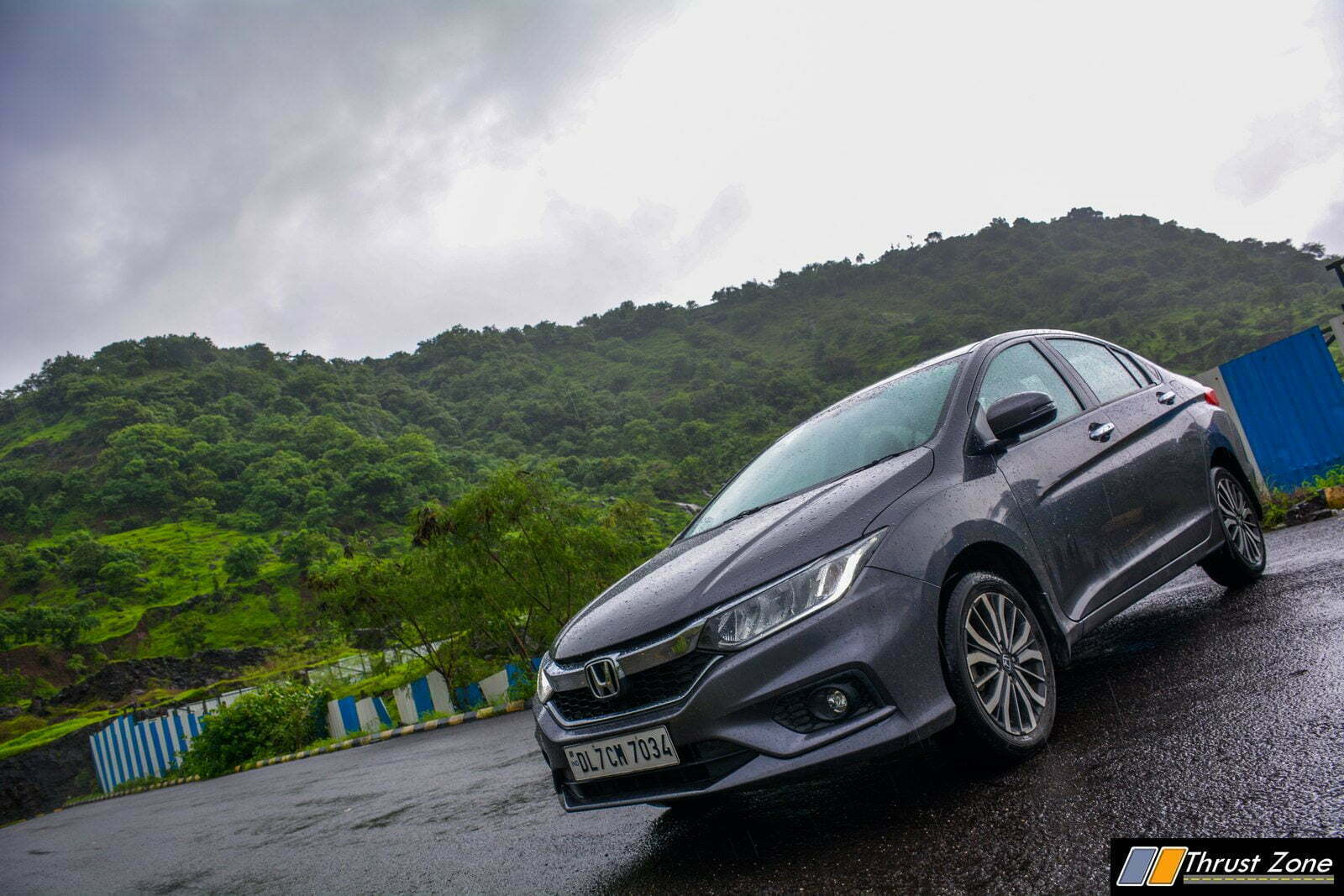 Everything works in the favor of Honda City as always. Such as the premium quotient, comfort, lots of space, features and good driving dynamics and very good engines, the pricing is higher than all its rivals throughout the variant. The top-end ZX variants are alarmingly priced higher than its rivals. City does offer a couple of more features, but that doesn’t justify the price tag. You can choose the VX and still be just fine with the value you are getting. However, in Honda’s case, the value comes from reliability and resale value which makes it an premium product in its class worth considering if you are in a market for a C-segment sedan.