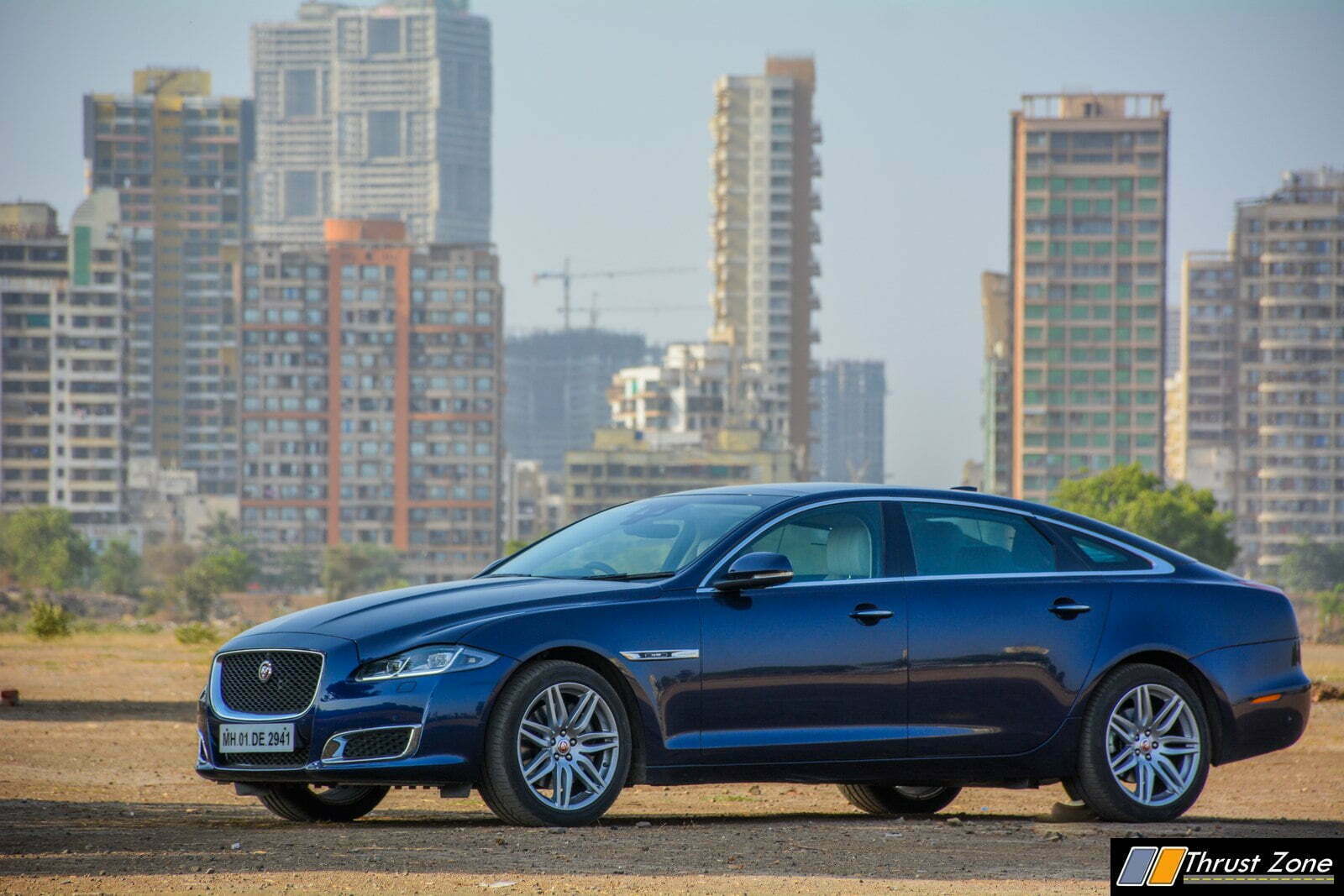 Luxury limousines, as they are called, are usually the flagship sedans from luxury car manufacturers around the world. Everyone has a different approach towards the product and ends up offering a lot different than the others. However, the plan is also to be the best at the same time. Reaching different customers and gaining traction in volumes also is the focus. 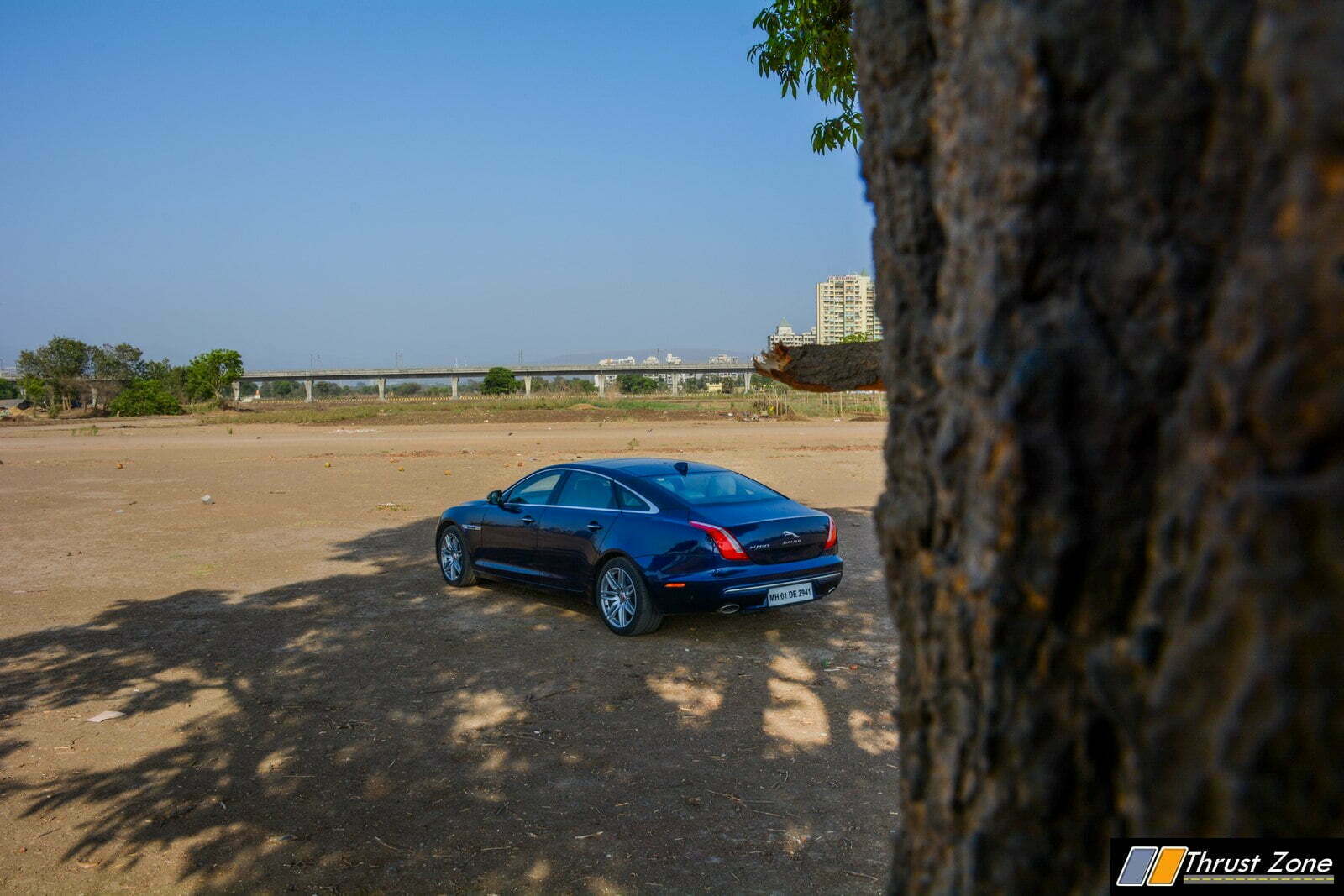 One such manufacturer who has been doing it very differently than the others is Jaguar with the flagship XJ saloon. The flagship saloon offers something which others have and something others don’t posses. This is also the XJ50 which is celebrating it 50’th anniversary worldwide of its inception. We find out what is it like after spending some quality time with it. 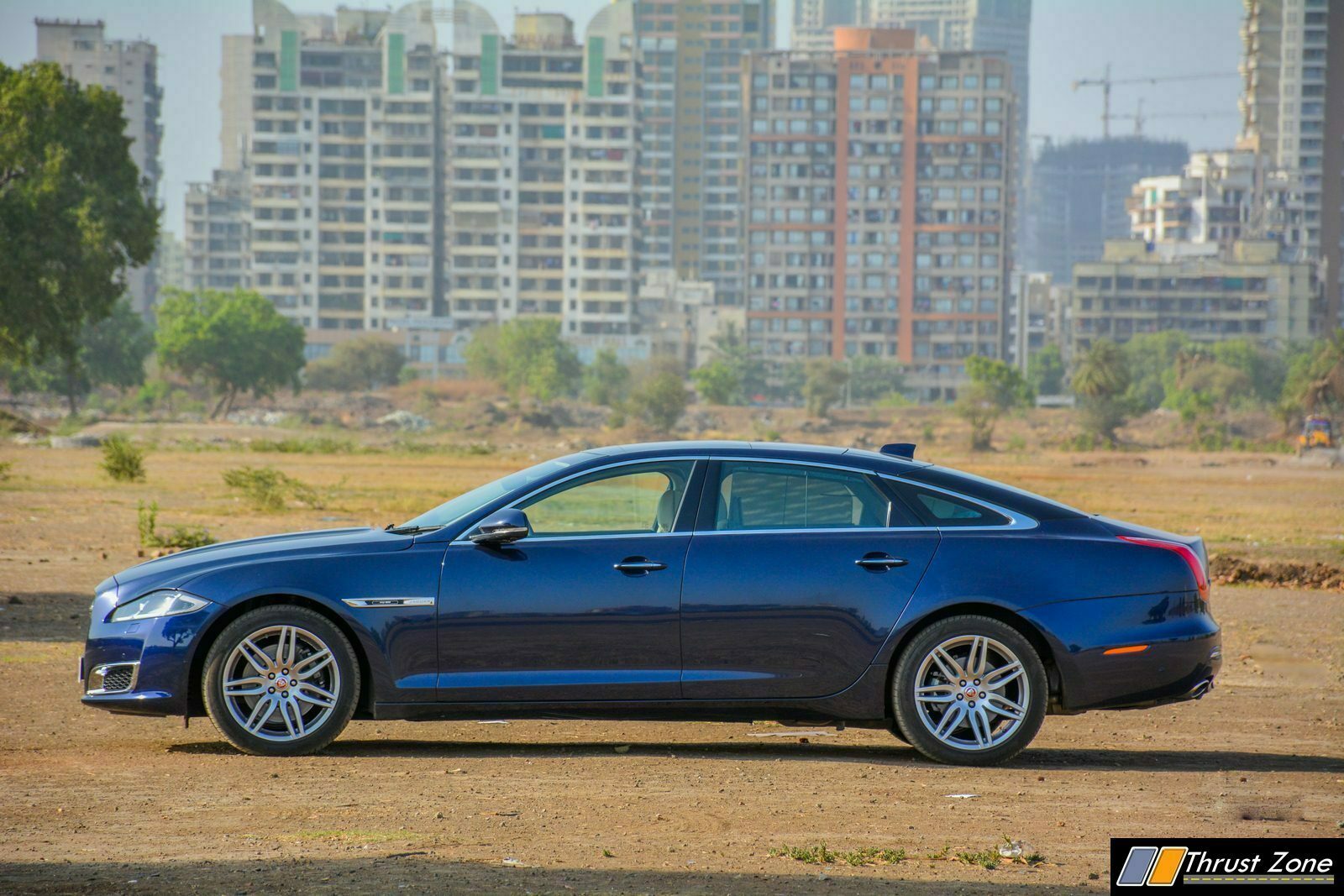 The design is unique to the sedan as the coupe like roofline stretches all the way from the A-Pillar to the C-Pillar and rakes down dramatically. There onwards, the swooping hatchback design goes back into a powerful looking rear end which has typical Jaguar distinctive tail-lamps which are large and and LED which illuminate in a rather bespoke manner. 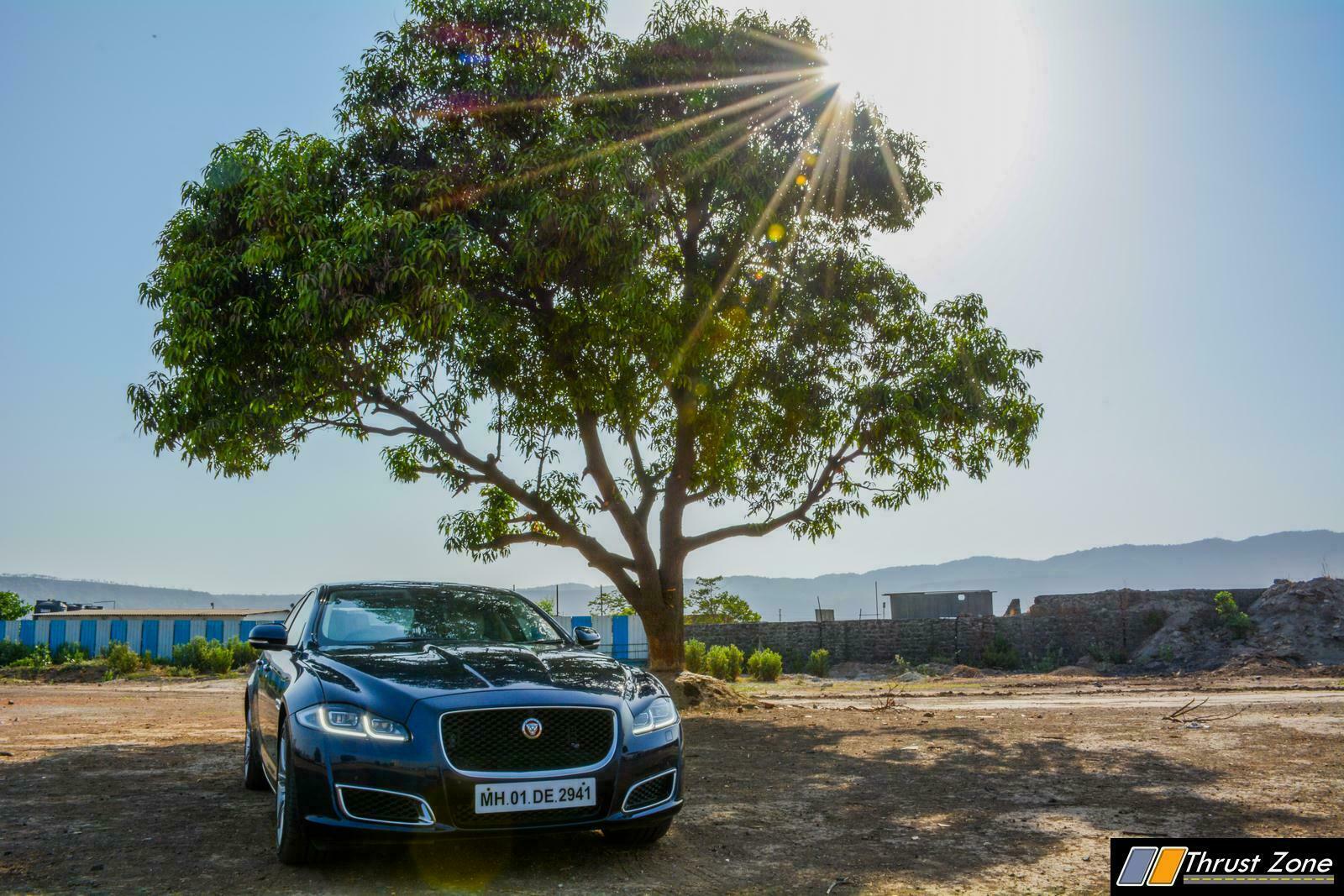 The boot button is oddly placed on the right side and ends up looking a quirk done right, for practical and aesthetics reasons. The 18-inch wheels also look great this time around as Jaguar doesn’t really provide the best looking wheels, not the case with this flagship model here. 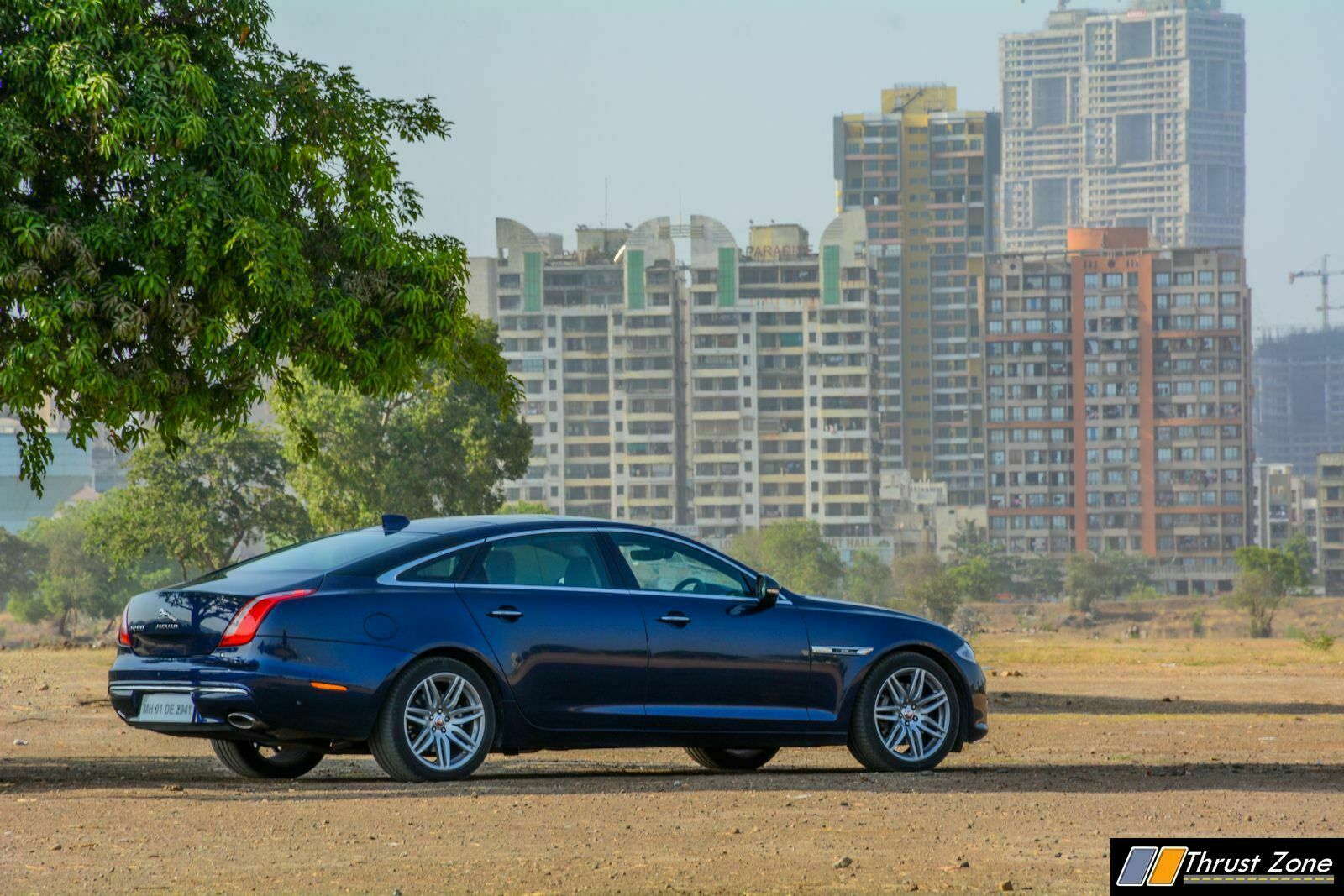 The red logo on the large front grille adds to the drama, which is again a unique character reserved to the Jaguar when compared to its peer. The headlights still look old school with its twin barrel setup and has projectors and LED DRL adding to the modern touch. Overall, we think its the design with the most drama with its long dimensions, muscular panel and quirky old-school elements that make it fit for a certain set of audience. 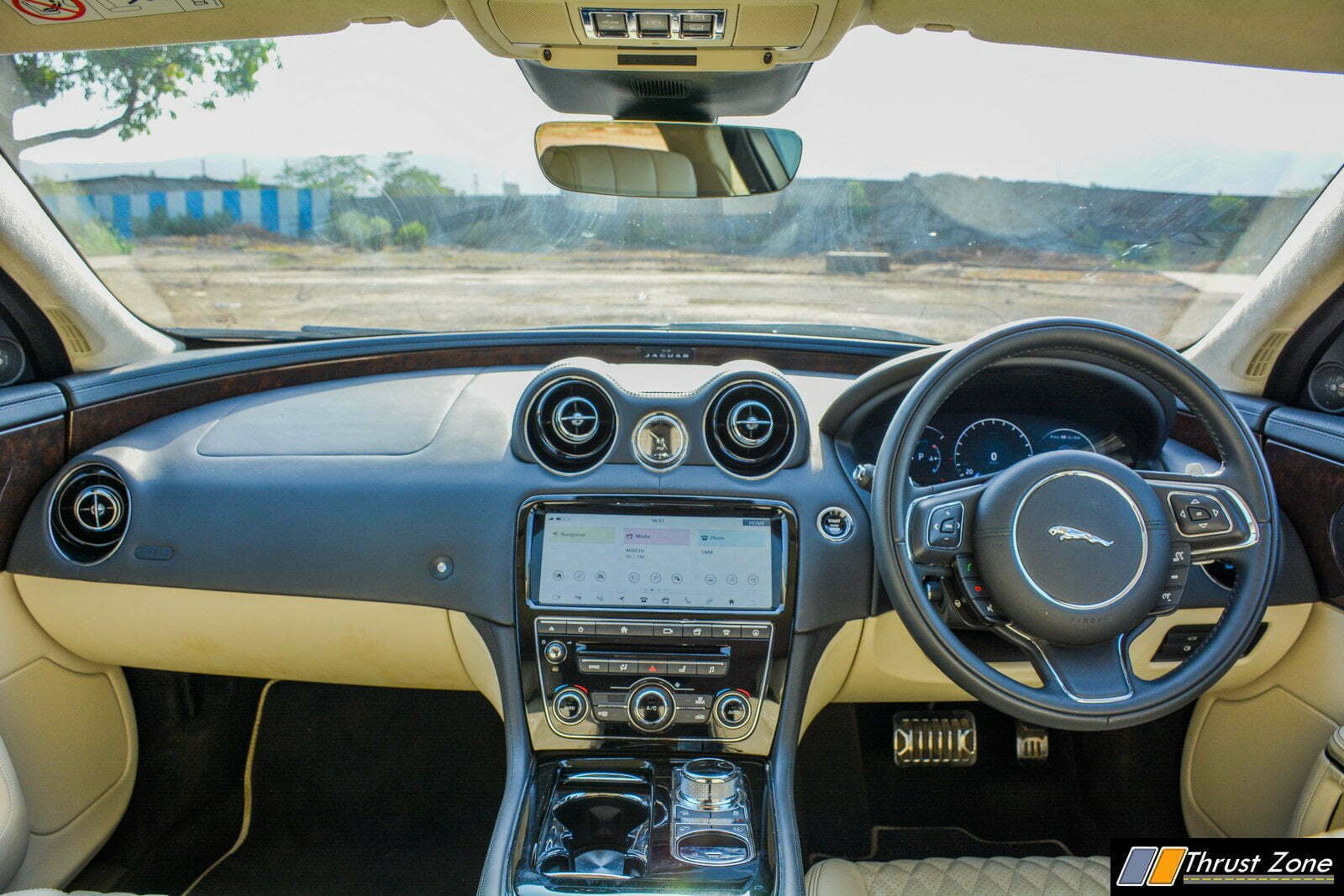 The interior is also has a similar theme where it has a distinctive old-school layout with beige interior and quilted leather seats with wood and leather around the dashboard making it a quintessential Jaguar/British sedan. The steering is the best to hold with contouring done all around it to make sure it feels right to grip. There are buttons on it which control telephony, music and cruise control. The cockpit like dashboard thanks to the semi-circular layout gives it a driver centeric approach. 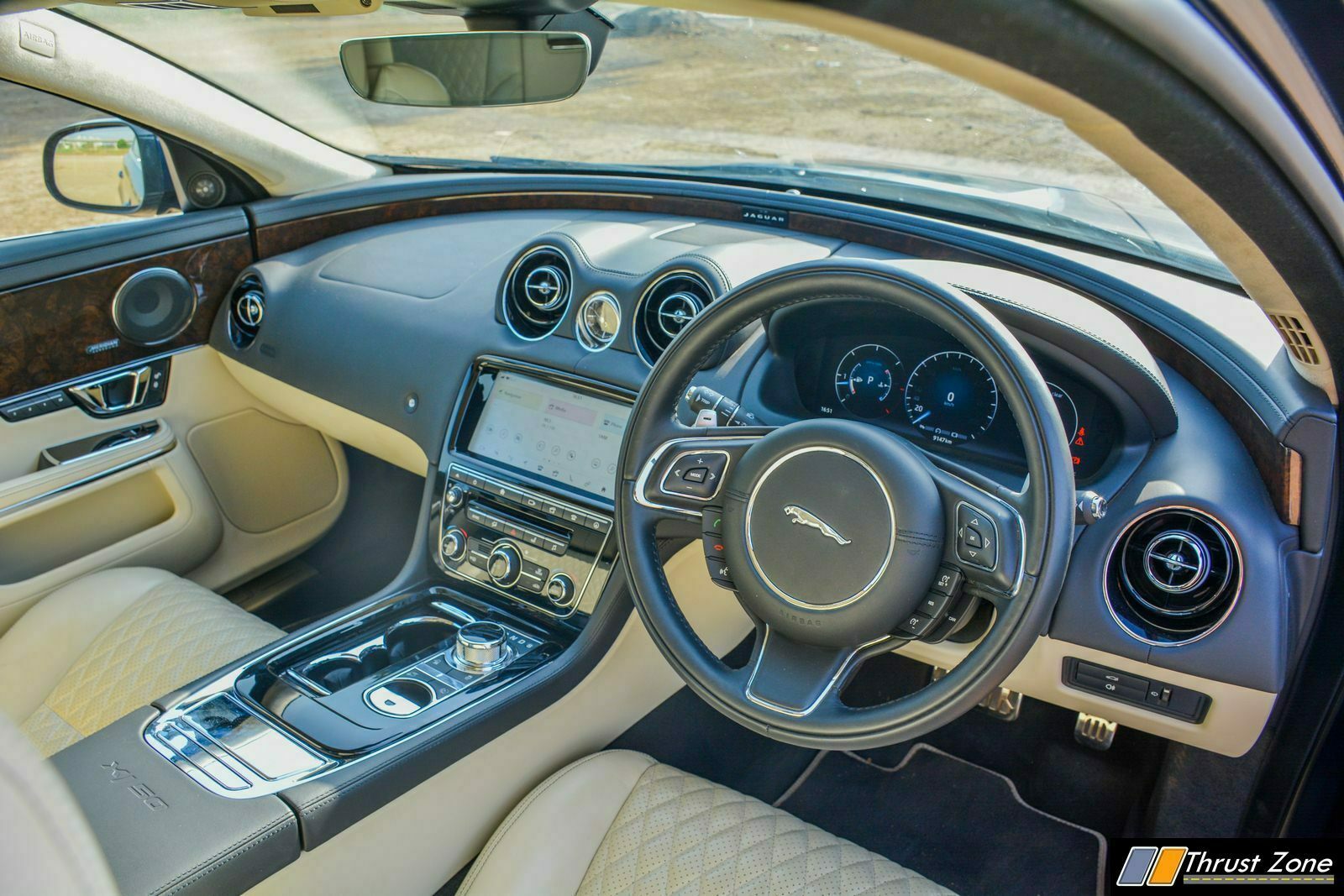 The center part of the dashboard gets the touch screen seen on modern Jaguar such as the XE and XF, but here it is a still single screen unlike the dual pro screen seen on the new XE and Land Rover models. The lower part is HVAC controls and other bits while the main touch screen has all the connectivity features, parking sensors, 360 degree camera and other things can be controlled from there. The wipers have in built water jets in it which is also neat and great touch. 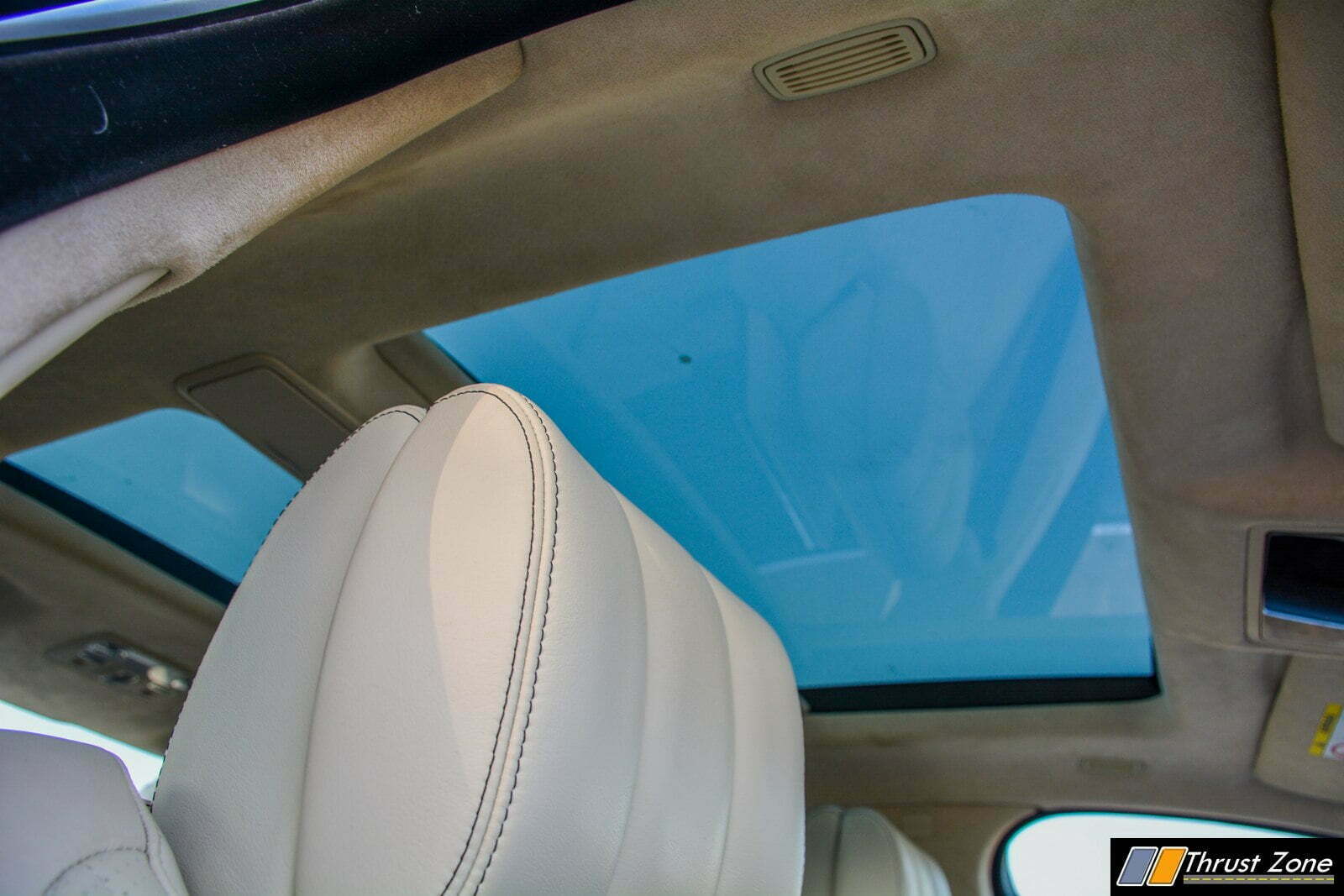 Feature list includes massage, ventilated seats for all four passengers which can be controlled from the touch screen at the front. Dual sunroofs on offer to make the cabin airy, the sun blinds on the rear wind screen and windows are electrically operated through the same power window switches. The sound system from Meridian in this car was better than the other saloons that we witnessed from Jaguar that are criticized for having not so great audio, not with this one! 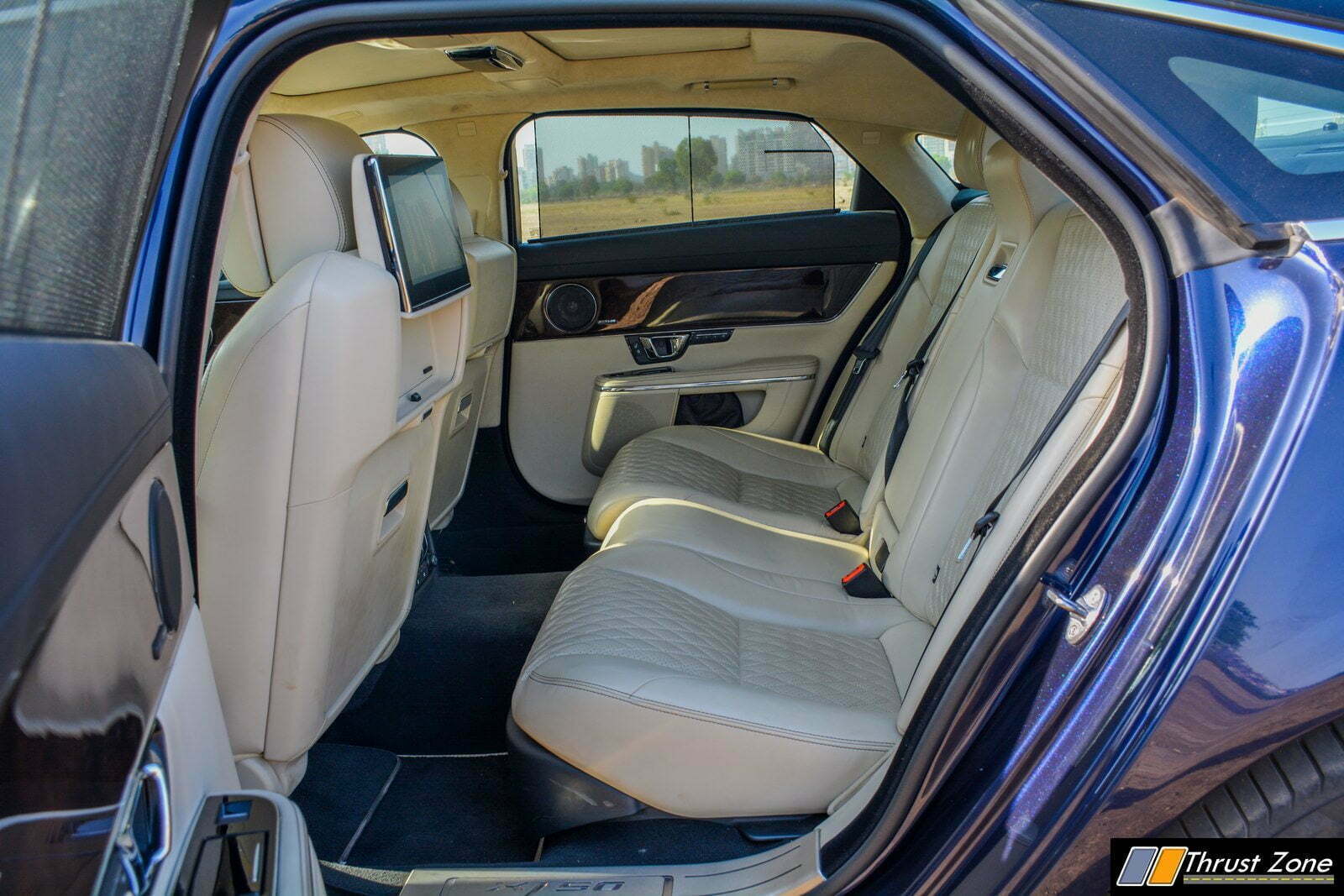 Space in the back isn’t the best according to the segment because this variant is the long wheelbase version like its rival which are sold in India. However, its comfortable enough, electrically adjusted seats at the back with the chauffer button on the side of seat to make more spacious. There was an optional smokers pack in our car at the back and a remote to control the rear entertainment screen. Boot space is generous at 487 litres. 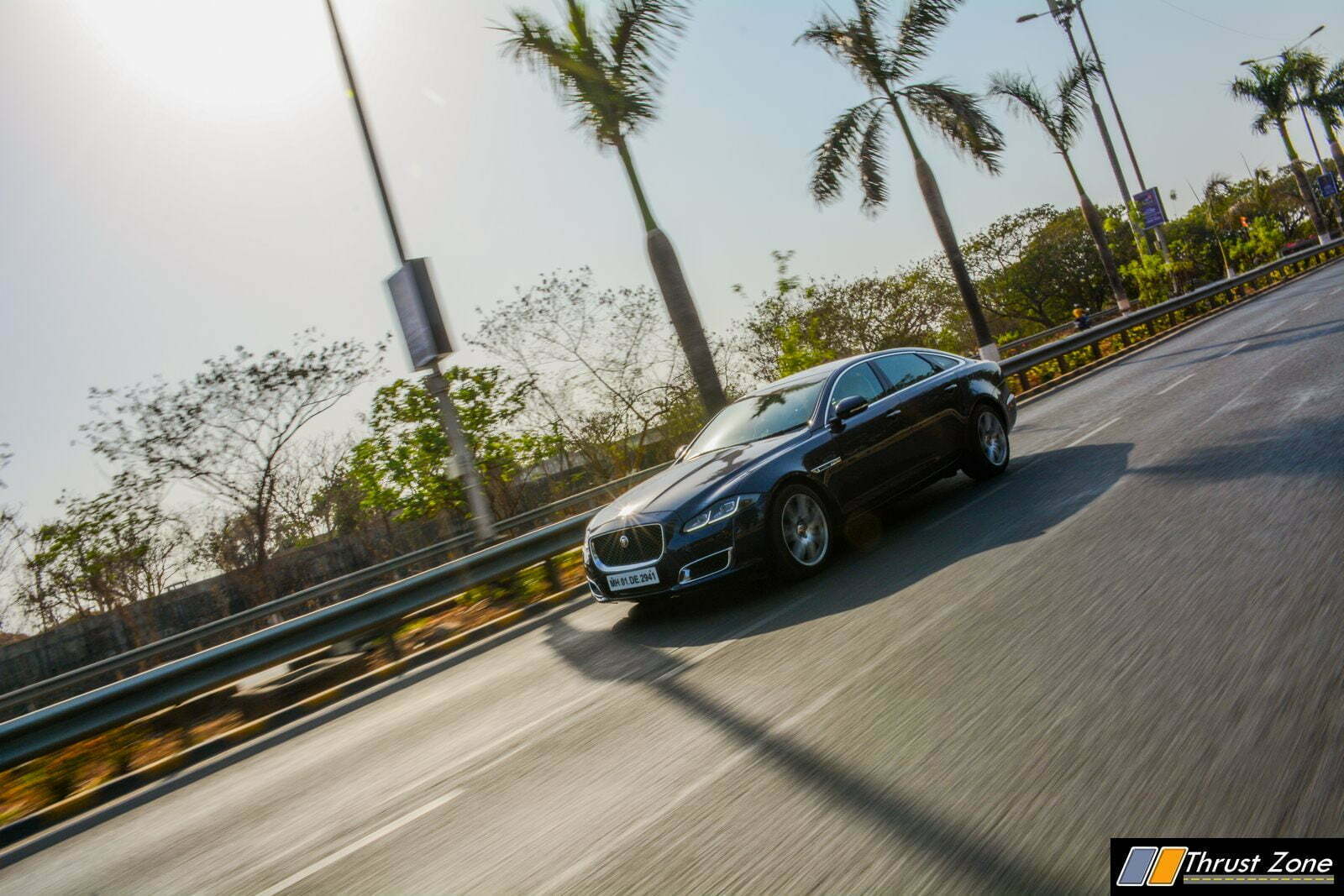 The engine on offer was the 3.0 litre V6 diesel engine that made a lot of horsepower and torque for a saloon. 300 PS of power and 687 Nm of torque is almost commercial vehicle numbers in a luxury saloon that weighs just under 2000 kg and the car just loves to spin its wheels and when it done doing that it will just rocket ahead pushing the driver in the seat with the surge as it keeps on shifting the 8-speed gearbox which is smooth and almost fast. Low speed shifts can be a tad bit slow. 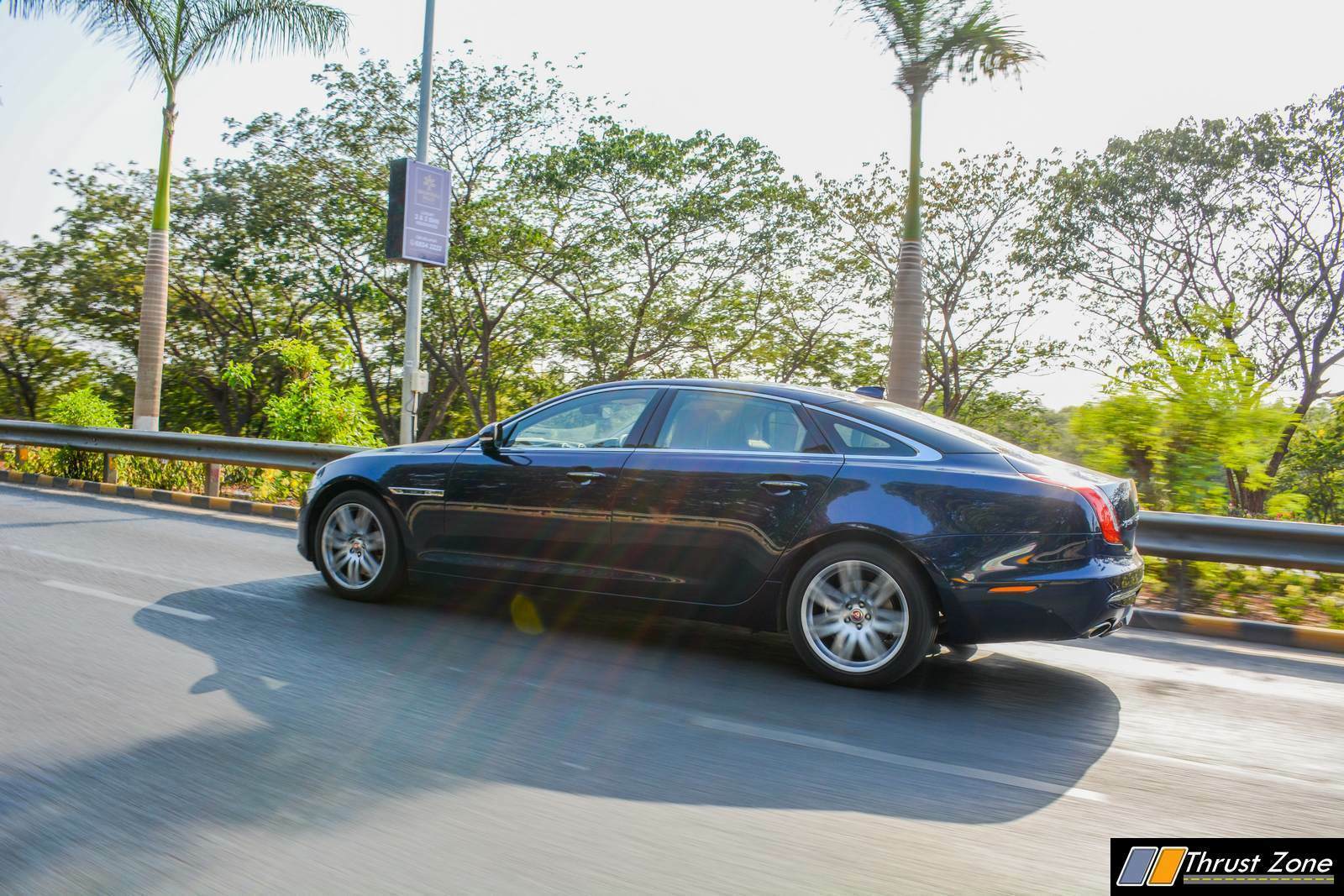 There were no driving modes on offer with this car. The engine is smooth, free and fast revving and has perfect amount of low-mid- top end power, something that is calibrated well and is a rarity in the segment as driveability and performance go hand in hand. The NVH levels were low and the cabin was devoid of wind, tyre and engine noise. The sedan is capable of doing 250 km/hr which is electronically limited and 0-100 km/hr in 6 seconds. 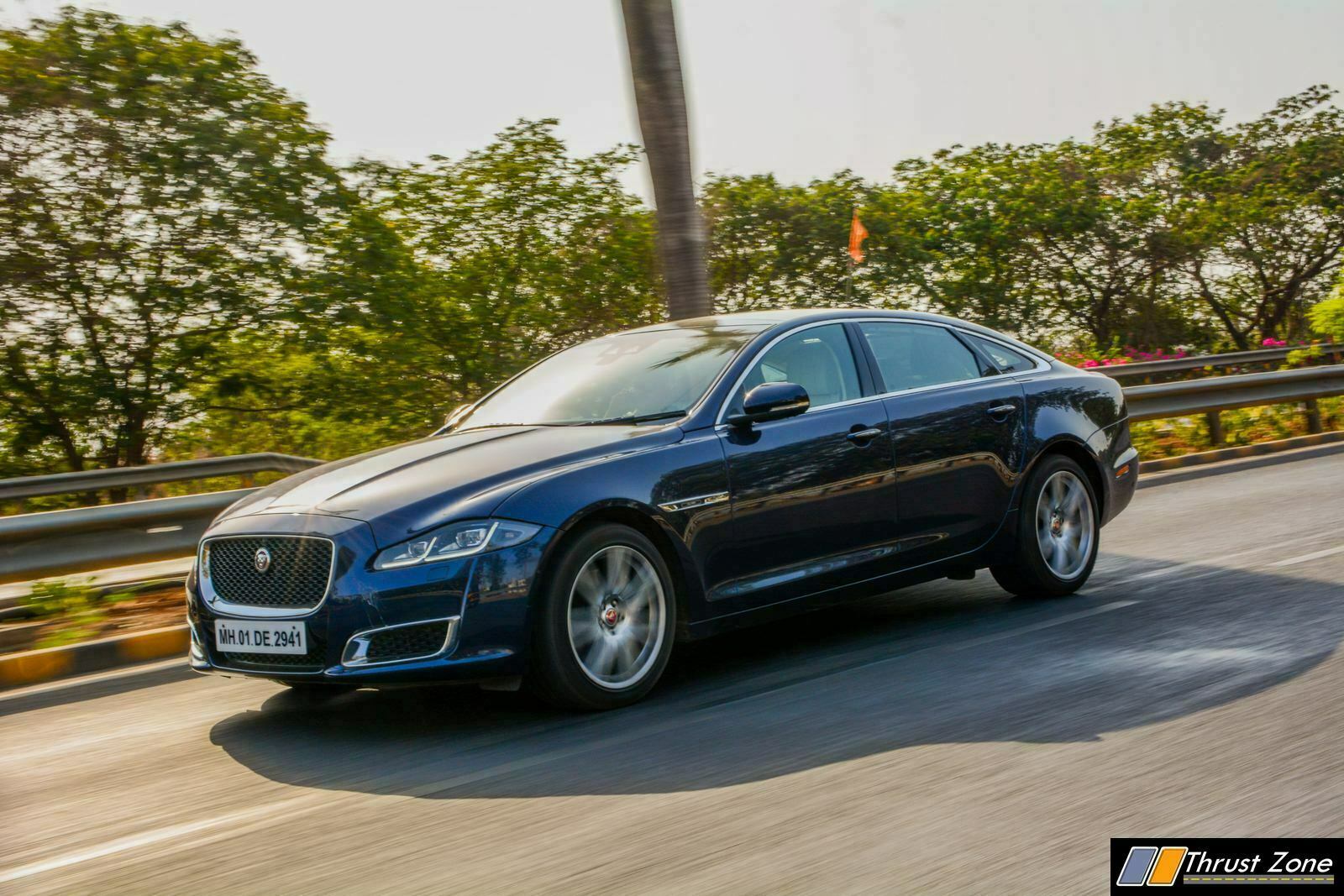 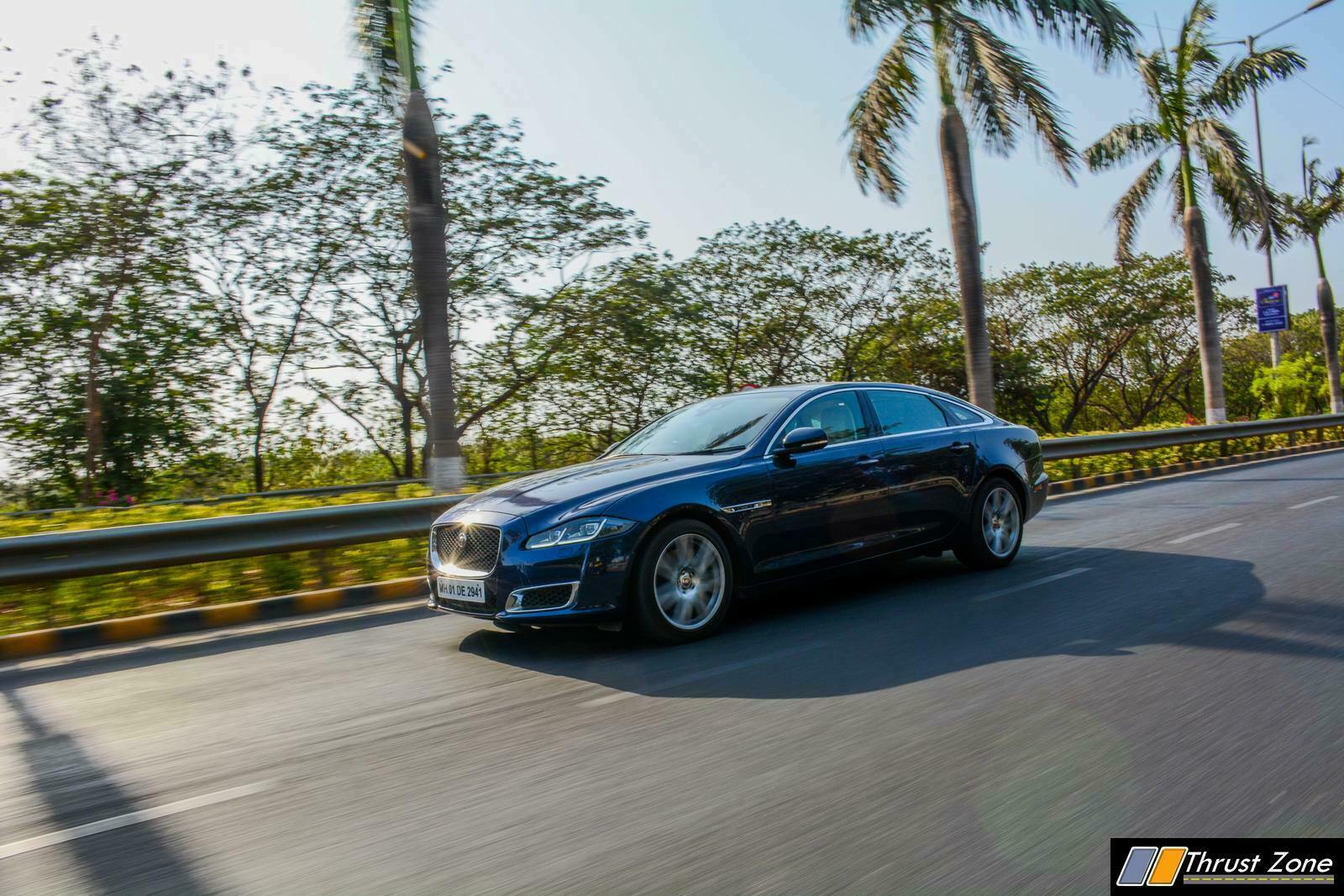 Dynamically, the XJ is rock solid on the highway at any given speed, the ride and handling balance is spot on. The ride is impeccable as it is stiff enough to provide very little body roll while ride quality doesn’t upset the cabin. The steering feel and feedback is good and it is light and precise at the same time. Brakes too, offer great bite at the pedal and progression post that is excellent too. 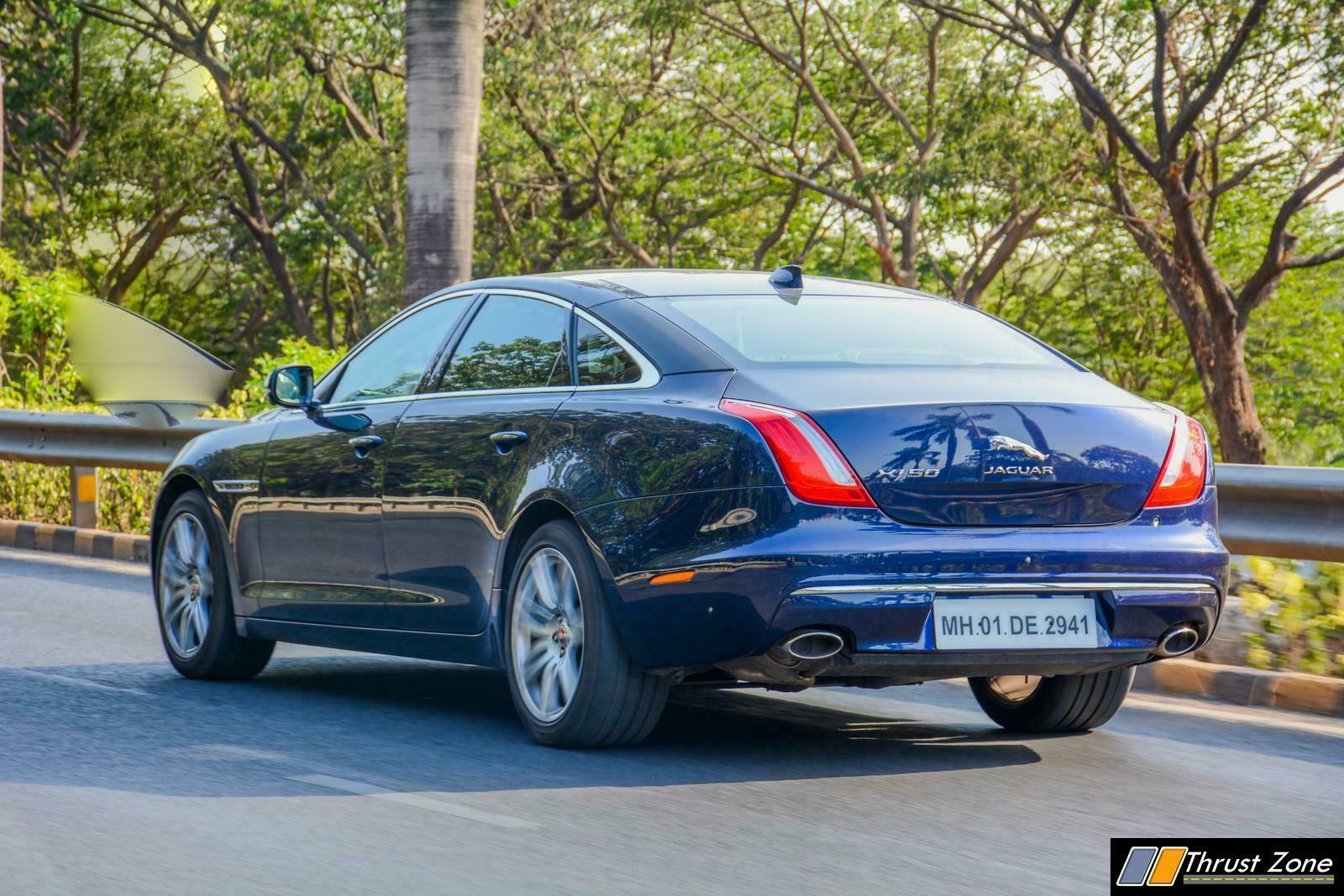 The fun nature of the car is due to the fact that it is entirely made of aluminium and feels light on its feet. The sheer poise and mature ride make it surprisingly the best flagship sedan in the segment, a bold claim, but we can vouch for it. The agility and nimbleness on offer due to well tuned steering ratio makes this car even fun to drive while being maneuverable enough for the city too. Ground clearance is good enough, but it can scrape over really speed breakers. 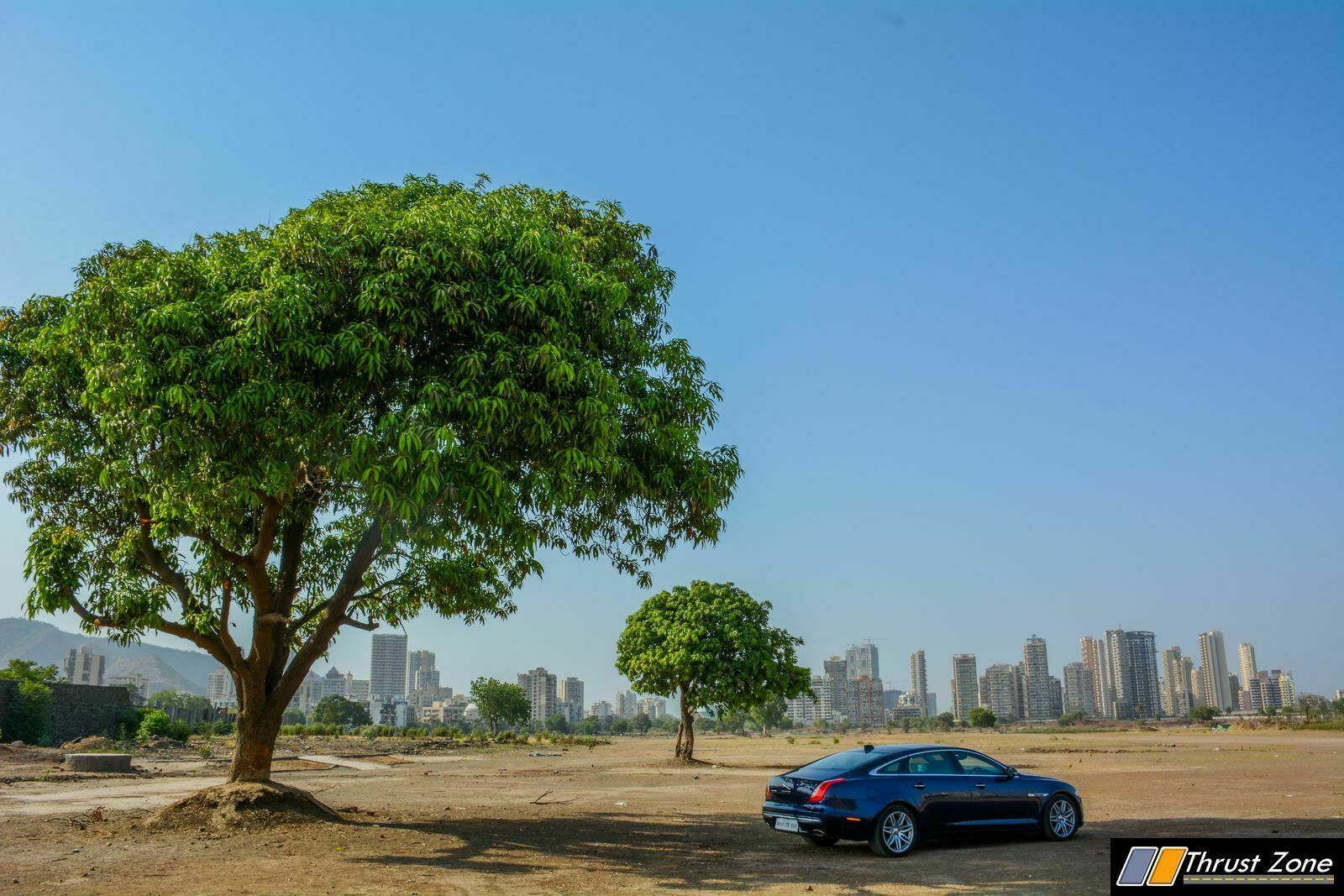 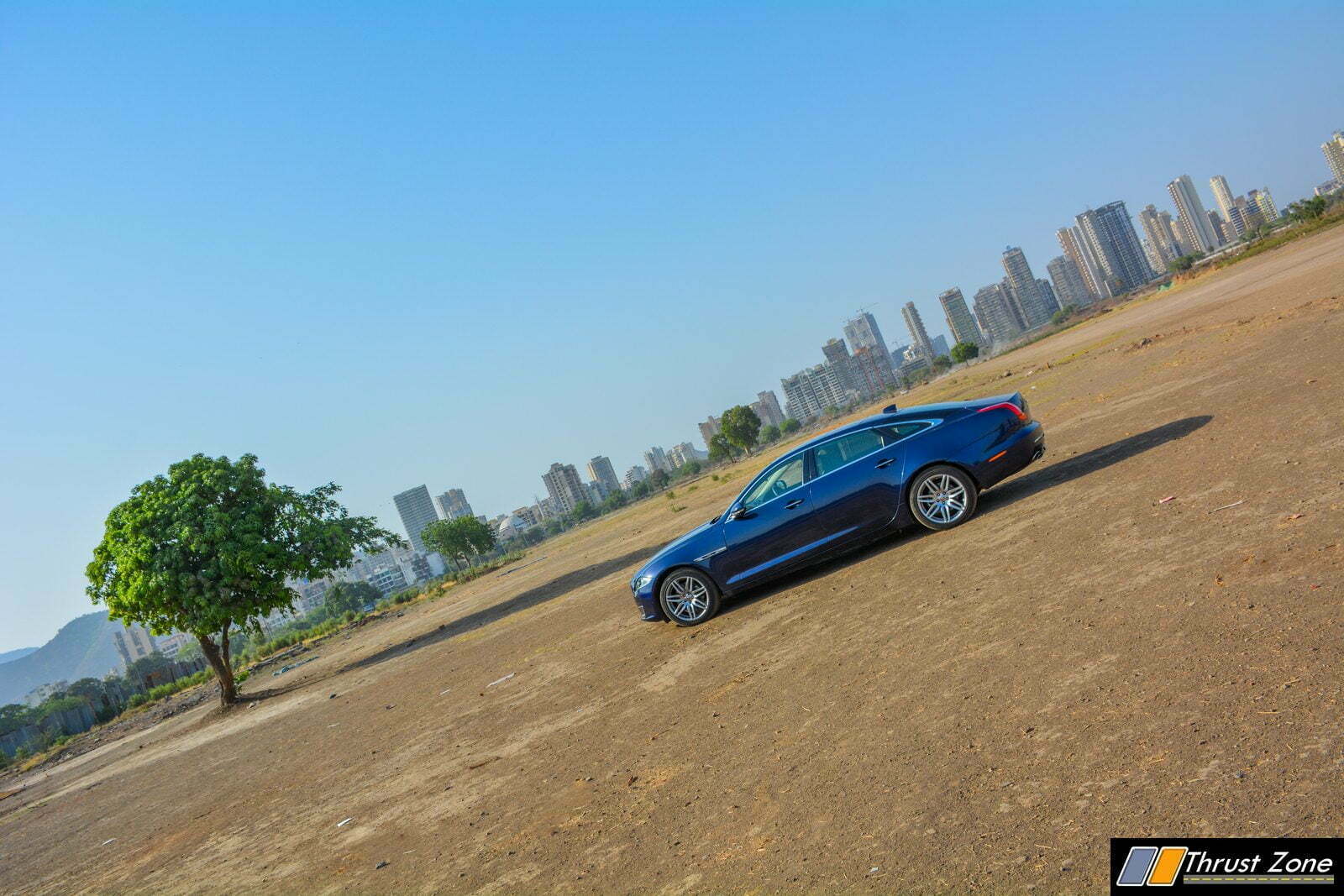 Surprisingly this is the flagship luxury saloon for people who love to drive it themselves and at the same time can be driven around too. This sort of crown was on the BMW 7-Series first but with this XJ, Jaguar has done it. However, it still isn’t the best when it comes to features list and best in class space. 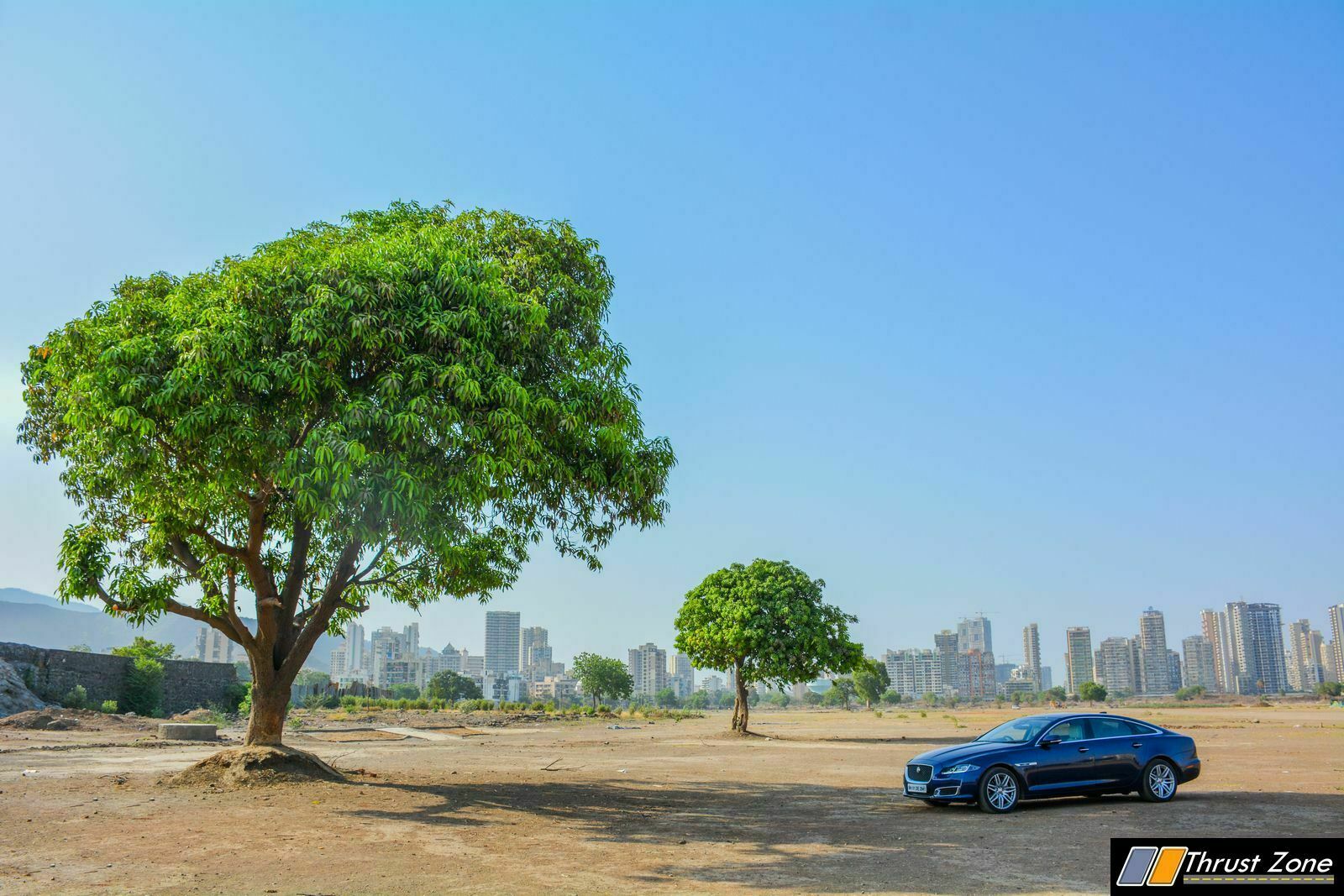 However, it makes up for it with old-school charm, extremely fun to drive, a punchy engine and exclusivity with the XJ 50 that comes is unparalleled. Be ready either to have a lot of fun or grab a lot of attention, i think that is what flagship saloons should offer and XJ 50 does that in style and substance.