2019 Kawasaki Ninja 300 Spares price cut is so high that this should take sales even higher as this was the last concern for buyers given past experience.

Kawasaki launched locally produced Ninja 300 in July last year. The made in India model resulted in a significant drop in its original price as the company got rid of heavy import duties applicable to the CBU units. Ninja 300, which once came at a tag of Rs 4.4 lakh (on-road price), is now cheaper by around Rs 1 lakh. Consequently, the demand for the bike gets the spurt with sales registering an impressive 10-fold growth – from 20-30 units in December 2017 to 220 units in December 2018.

Despite the increase in sales, many owners complained that the cost of the spares still continued to be on the higher side. Taking the cognizance, Kawasaki promised to look into the matter and now officially, the cost of the spare parts has been reduced by 1, 355%, or Rs 47,000. The highest percentage reduction has been implemented for the front disc brake which now costs Rs 2,100 against its earlier price of Rs 28,460.

The cowling gets the highest price reduction with a decrease of Rs 47,010. The prices of clutch cable have been reduced to Rs 250 from Rs 1,860; throttle cable now costs Rs 290 down from Rs 1,950; clutch lever comes at Rs 650; brake lever at Rs 440; turn indicator at Rs 470, front tyre at Rs 2,690, rear tyre at Rs 4,280; and the wheel assembly now costs between Rs 6k-7k. Kawasaki has been able to make some bold decisions after it parted ways with Bajaj and the positive effect of these decisions can now be felt on the ground. 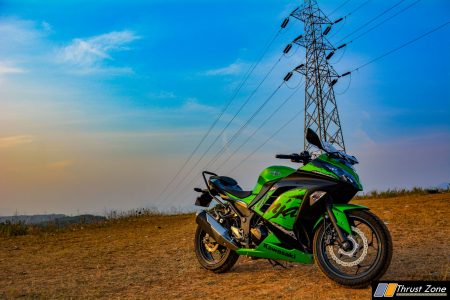 Ninja 300 comes powered by 296cc, twin-cylinder fuel-injection engine which puts out 39PS and 27Nm. The significant features of the bike include the dual ABS system, digital instrument cluster, 17-liter fuel tank capacity, and a dual headlight.