2019 WagonR Vs 2019 Santro Vs 2019 Tata Tiago – Specification Comparison – Apart from the price, everything is out

With its roomy interiors and affordable pricing along with rightly priced aftermarket sales and service, the Maruti Suzuki Wagon R has been leading in its segment in the Indian market. For quite some time the Wagon R didn’t receive any facelift, now with Hyundai getting back the Santro, the competition in the segment has increased. With this, Maruti will be launching a facelift for the Wagon R which will be launched on the 23rd of January. Just before the launch, the brochure has been leaked, hence we get to you the on paper comparison of the upcoming 2019 Wagon R with the Tata Tiago and the new Hyundai Santro.

Dimensions:
The new WagonR in comparison with the New Santro is longer, but as we compare it to the Tiago, the WagonR is quite small. Amongst its rivals, the new Wagon R is the narrowest.continuing with the tall body design, the Wagon R is the tallest in comparison with the Santro and the Tiago and in its segment, Maruti has equipped the Wagon R with the longest wheelbase. In terms of weight, the New Wagon r is the lightest and all the three (New WagonR, Tiago and the New Santro) runs on 14-inch wheels.

Power Train:
Maruti will be powering the new Wagon R with the same 1.0 litre three-cylinder pot which was also available in the previous model. This petrol engine will be also available with an LPG and CNG option as well. The 1.0 litre petrol engine churns out 67PS of power and 90Nm of torque. In addition to this, Maruti will also be bringing a larger 1.2 litre four cylinder petrol mill which also powers the Ignis and the New Swift. This engine is capable of churning out 83PS of power and 113Nm of twist. Both the engines will be coupled with a five speed manual gearbox and it will also come with an option for an AMT setup. 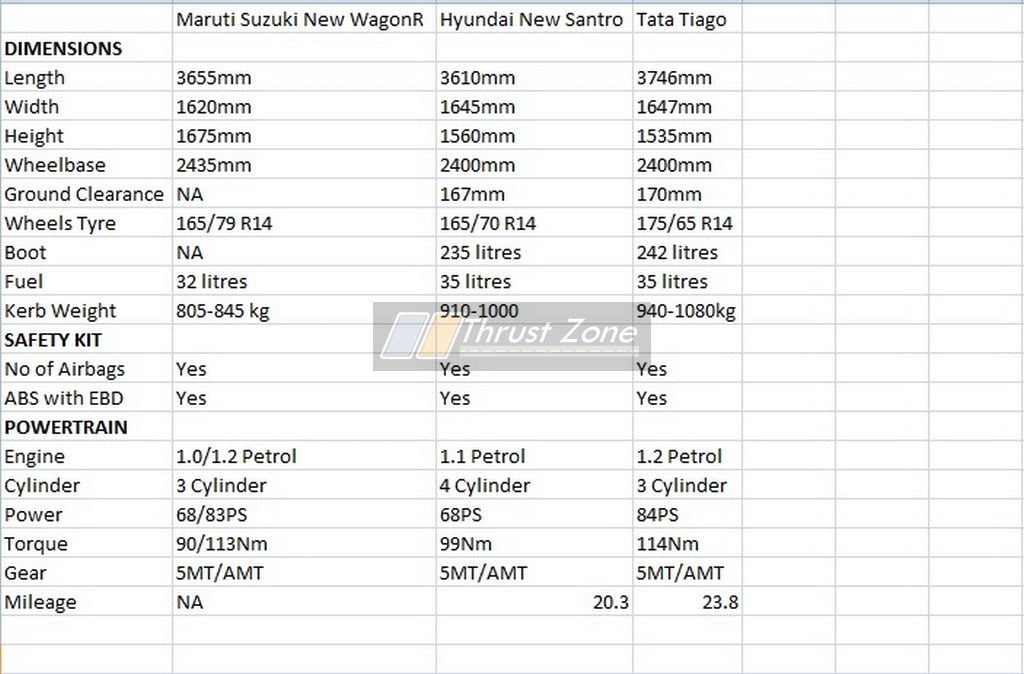 Safety Features:
In terms of the safety kit, all the three cars come equipped with the safety features which meet the new safety regulations. These safety features include front dual airbags, ABS with EBD, energy absorbing structure, collapsible steering column and it also includes immobilizer and central locking.

Average:
Here where it all comes to a “Kitna Deti Hai” Obsessed nation. With the significant reduction in weight for the new Wagon R, the performance and fuel economy has increased. On the other hand, the New Santro offers a mileage of 20.3 km per litre from its petrol mill, while the CNG variant gives out 30.48 km per kg. The petrol model of the Tiago returns a mileage of 23.84 km per litre, while the diesel model gives out 27.28 km per litre. As there are no official details regarding the mileage of New WagonR, but this hatchback is now lighter in comparison with its rivals, it will most probably surpass its rivals in terms of fuel efficiency.

Pricing:
Hyundai retails the Santro between Rs 3.9 lakh to 5.65 lakh (Ex-Showroom, Delhi), while the Tiago has been priced between Rs 3.5 lakh to 6.15 lakh (Ex-Showroom, Delhi). On the other hand, Maruti is expected to price the lower version of the New Wagon R with a higher price in comparison to the lower variants of its rivals. But the prices of the top variants will be comparable, this is the same strategy which was used in its previous model.

Friendly Neighborhood TVS Ntorq Is A Transformer Within – Check it out!