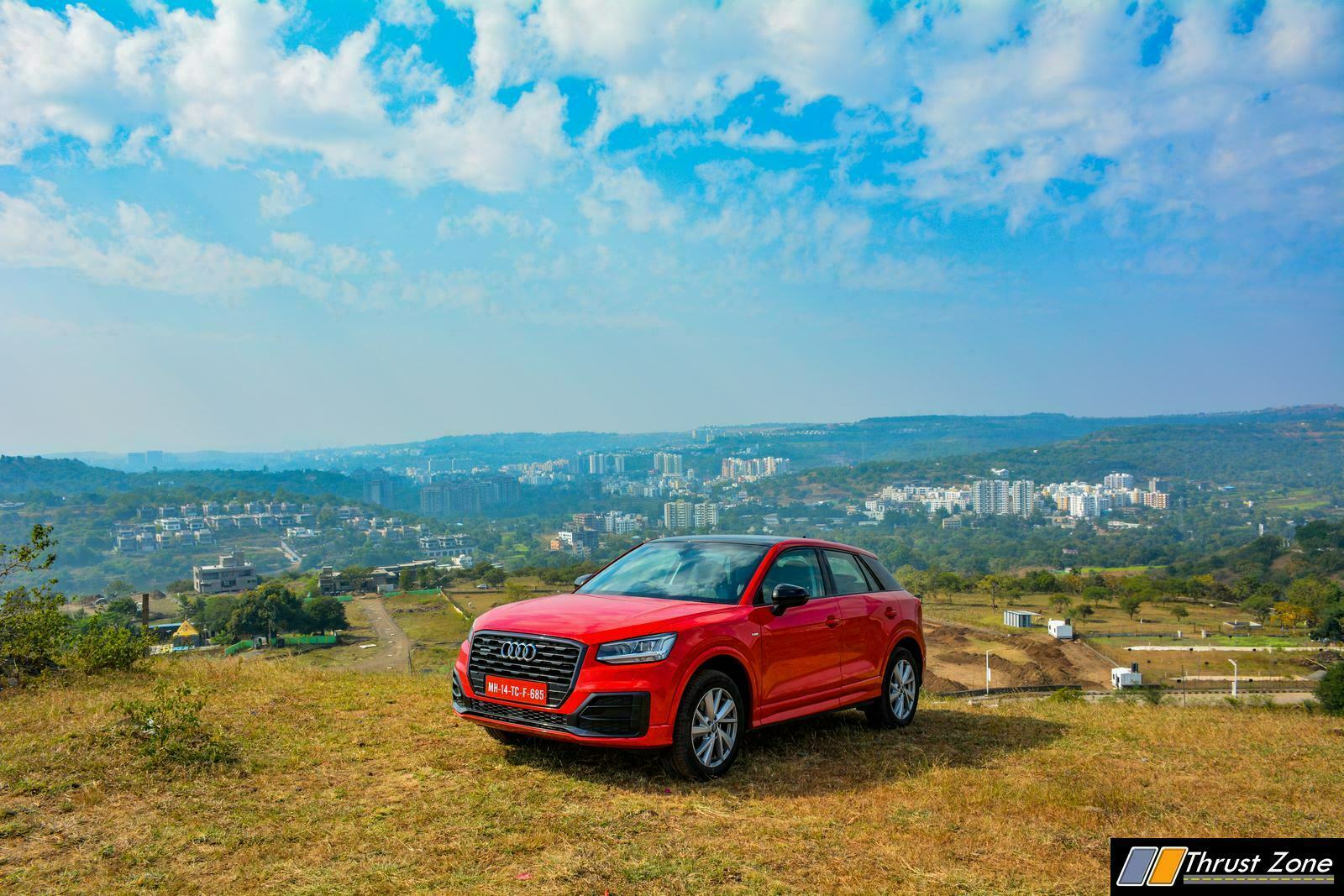 Cars and culture. Often discussed topics between enthusiasts. How Japan gives us unimaginably simple and exotic cars while Europeans give us so much thrust and complexity to play around with. Japanese learned from Europeans and made big SUV’s and Europeans started making smaller cars. So we get small SUV’s from Europeans and large SUV’s from Japanese. In India, this topic is widely discussed during the idea of buying an Rs. 40-50 lakh SUV as they end up falling the same price bracket and only difference is a size vs brand. 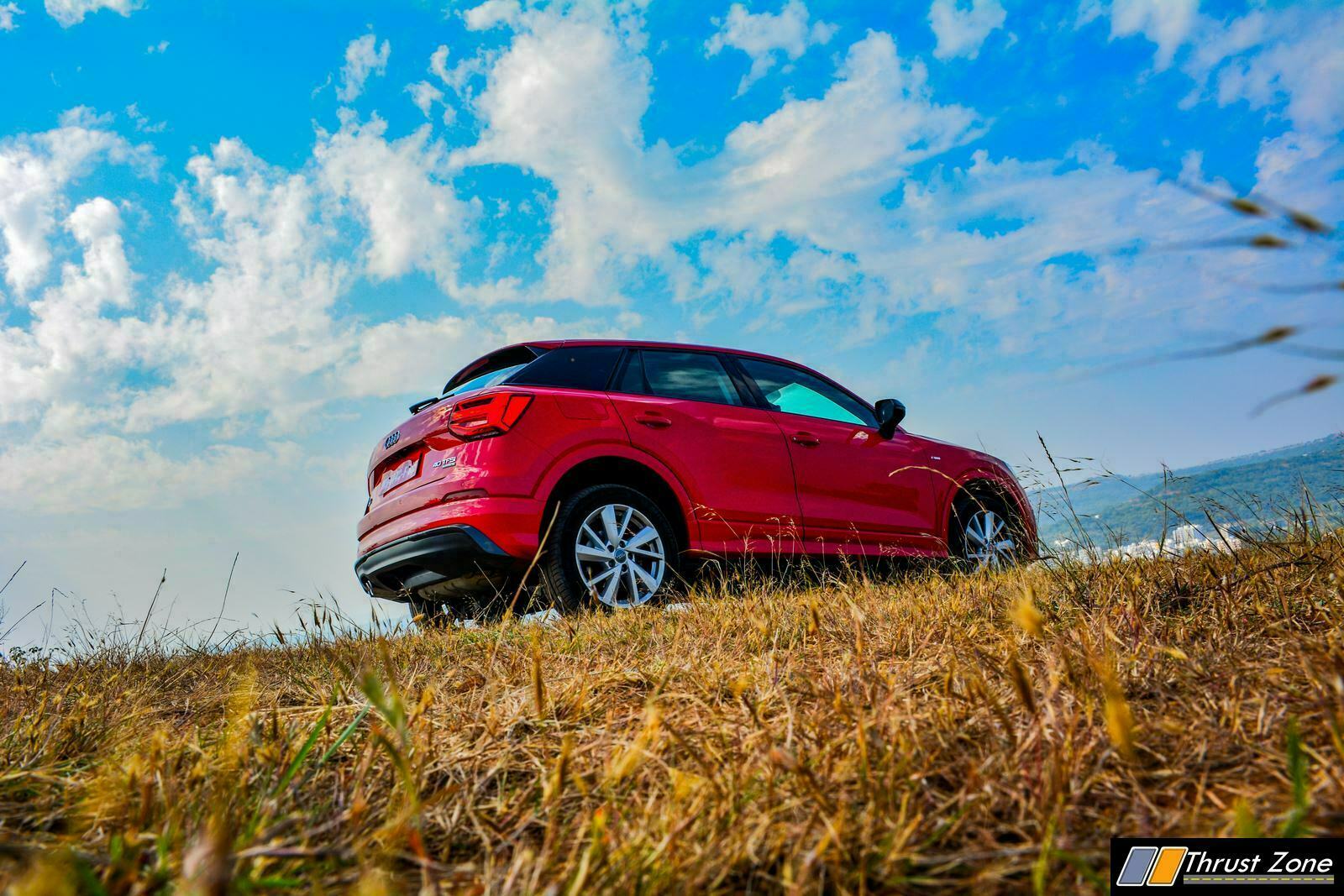 Volkswagen group is being the pioneer is giving us all kinds of flavours from its own and its sister brands. Audi is one of them. A manufacturer which has a reputation for some cool SUV’s. Going down the family lineage, it is now making smaller SUV’s. From Q3, to Q2, the latter is now the entry-level SUV for the brand. On paper there are so many possibilities and qualities that Q2 has? How does that translate in real life, we find out! 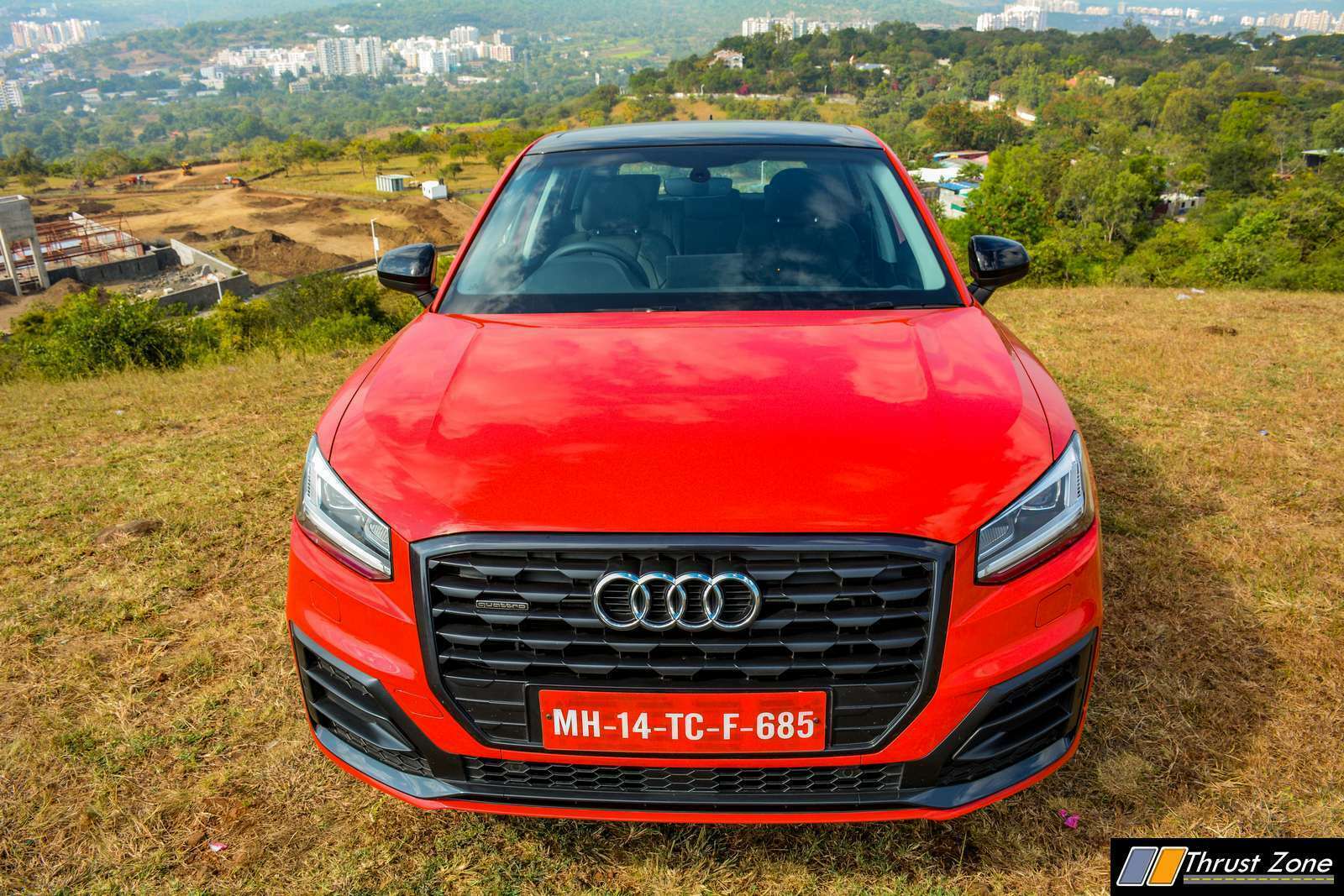 Design of the Q2 is more of a crossover than a full-size SUV. Sure it falls in the midsize segment thanks to its length, however, the not so tall stance and more than normal extra ground clearance over a normal car lend it the crossover template. The elements though, make it look cool and sophisticated just like any other Audi. The black grille with our red car put out a great contrast setting. 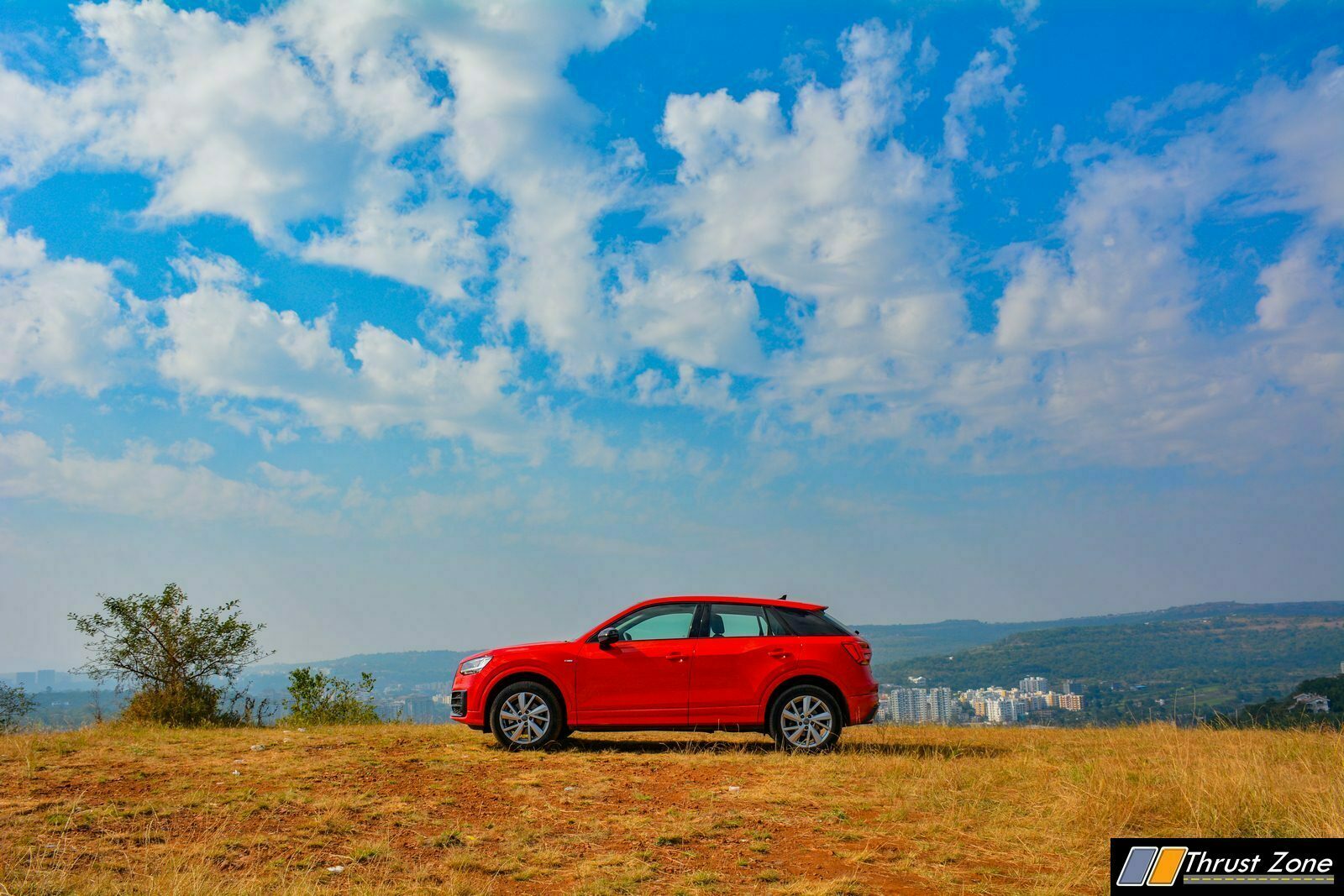 The LED lights in the chunky head and tail-lamp units were, as always the highlights of the exterior. With unique and bright illumination they make the SUV stand out. The alloy wheels look basic and the black-end C-pillar make it overall look very contemporary yet special. Better colour can make the Audi pop out even more. Something that will depend on the consumers and their tastes. Overall, a standout car, yes, because it did grab a good amount of attention in our usual Mumbai-Pune run. 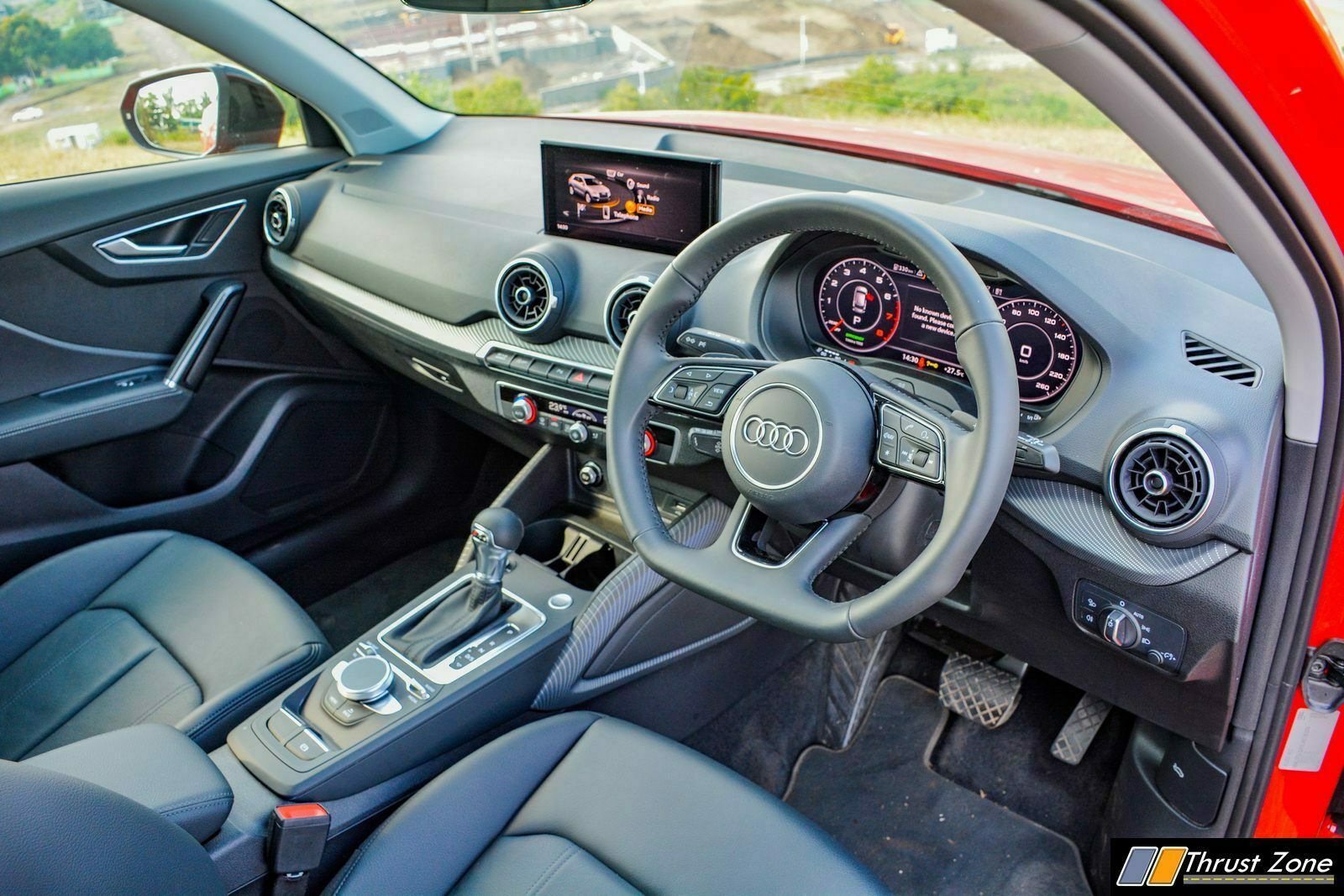 Quality of the cabin remains top-notch as always with any Audi. A minimalist approach can be seen with a screen in the middle, air vents which look special and all the features can be accessed through the centre console below via buttons and dials. A cabin can be termed as spartan as well because of the large dashboard with no special elements too it. Spartan can be clearly be said about the features list which excludes powered seats, boot release button the front driver door pad, no SYNC for A/C, no rear A/C vents in the top of the line variant that we were driving. 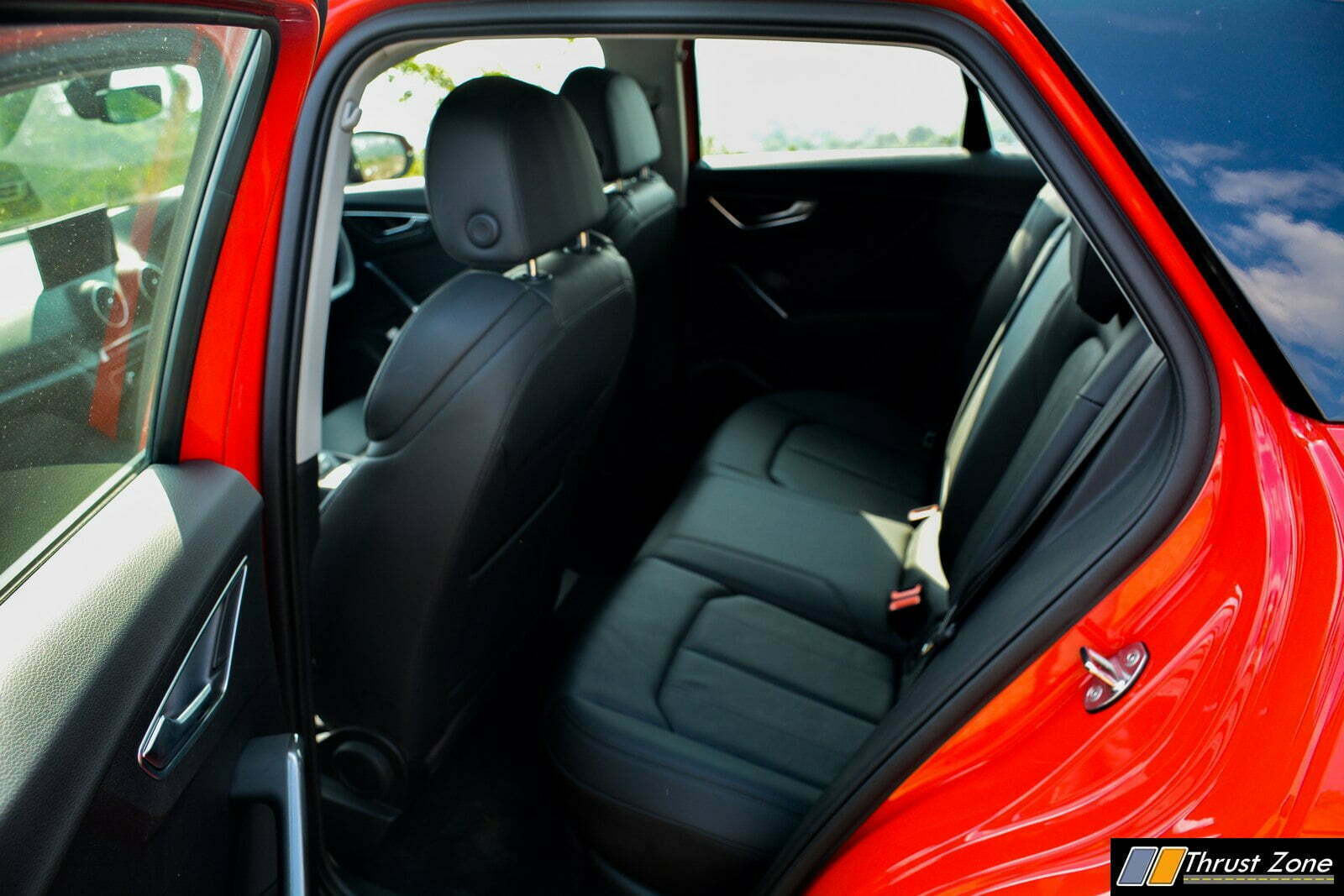 Space at the back is adequate at best when it comes to knee, shoulder, leg and headroom. Boot space also stands at only 405 litres. It can be expanded with seats folded to 1050 litres. This makes it a car for everyday commutes and weekend trips. Long journeys for more than two people’s luggage and space will be a tight squeeze. 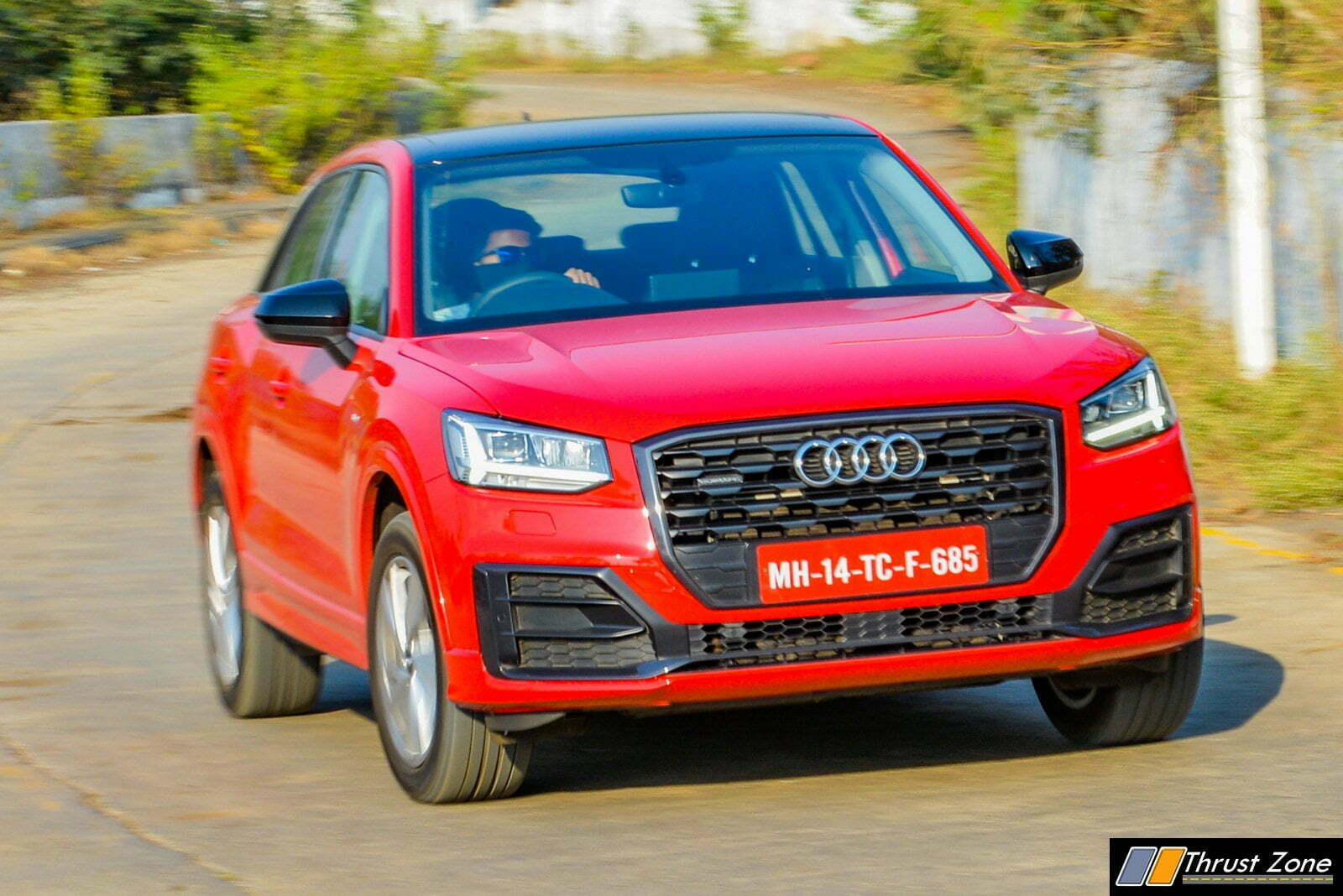 Despite hits and misses, the bigger highlight is the powertrain part this time around as it is spot on! 2.0-litre TFSi motor making 190 PS and 320 Nm of torque and all the power is going through the famed, quick and smooth shifting 7-speed DSG gearbox which gives power to all four wheels instead of two as usual. A small car with Quattro and that much power means it gets off the line very quickly.

It just sprints ahead and gives you a feel of a much bigger car than it is. 0-100 km/hr is faster than the Audi A4 which is currently on sale as it does it in 6.3 seconds! The next ton is also achieved quickly as the power to weight ratio is segment best! The motor has the lowest NVH levels in its class and that keeps things comfortable in the city and on the highways. The low and mid-range pull is excellent as well and navigation and overtaking in the city and on the highway respectively is as easy as eating a pie! 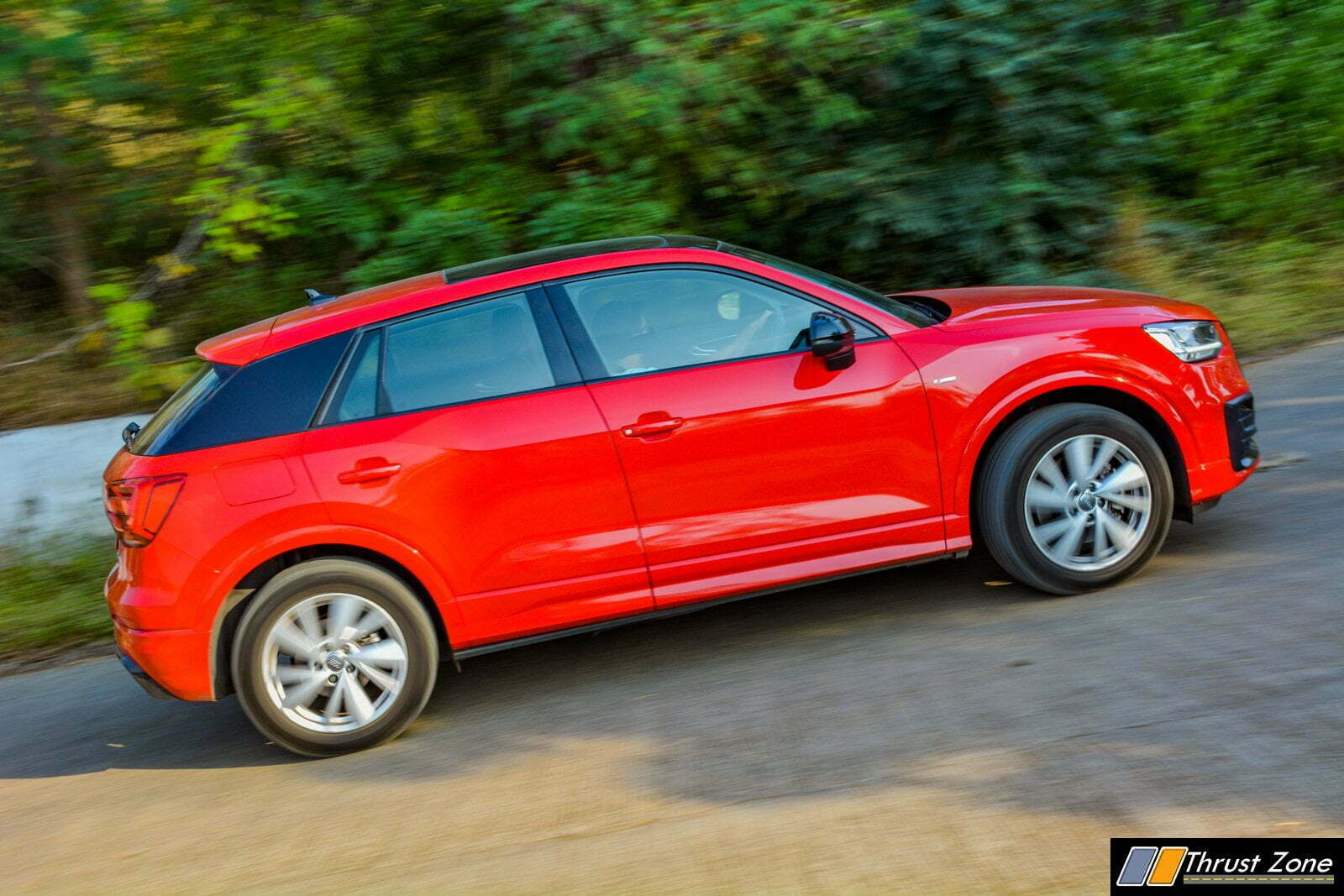 Dynamically, any Audi equipped with Quattro does have very different steering feel to FWD Audi’s and it makes Audi quite sporty to drive and closer to its rivals. Steering feel and feedback is good enough and it weighs up well on the highway as well. Still not as good as a BMW, but better than the Volvo XC40 which it sort of competes with. Braking was excellent as always with tyres also helping make things better and confidence-inspiring. 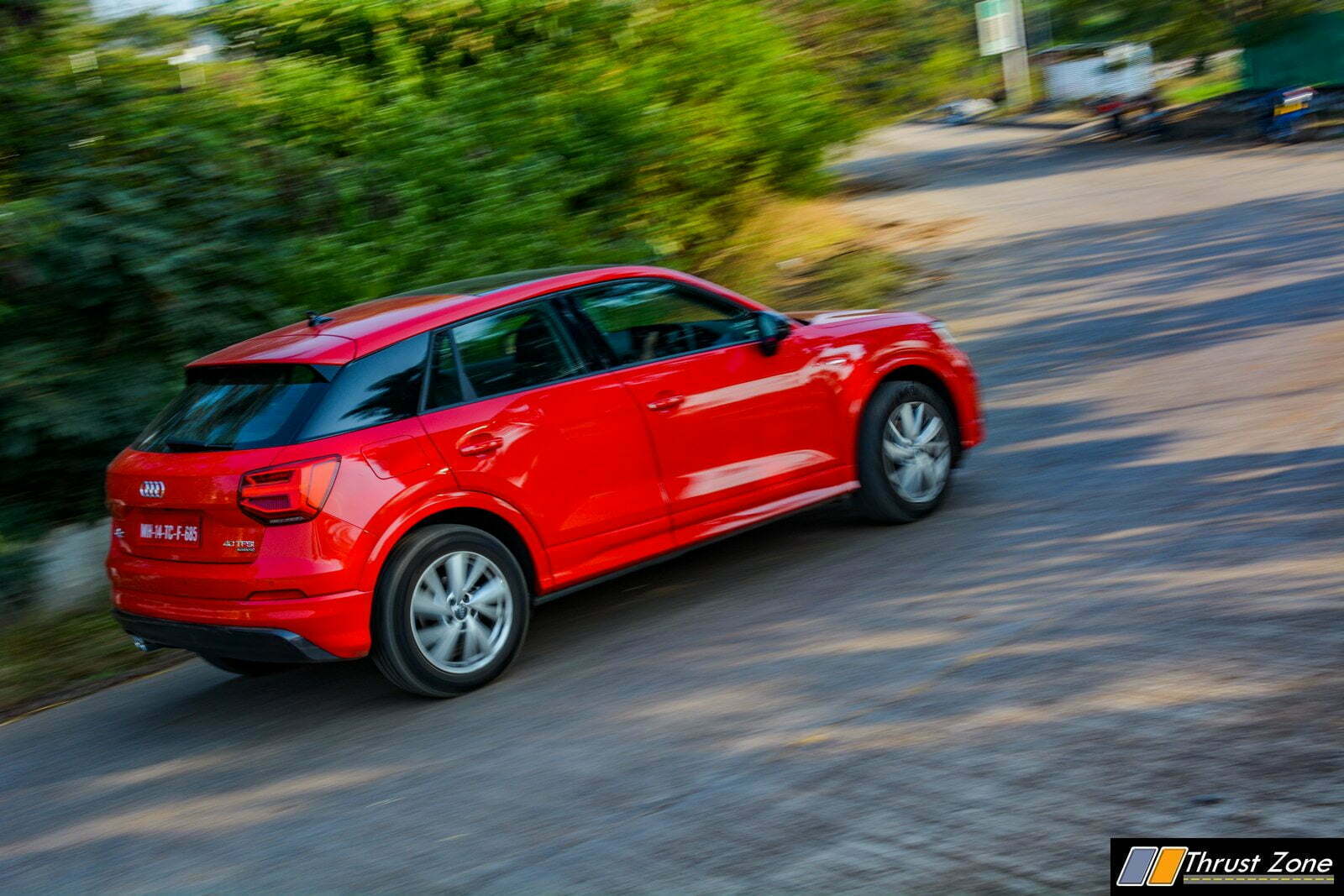 Going through corners, it does feel stable and agile but with a tad bit body roll involved. With a quick performance on tap and a car that feels confident thanks to Quattro and a suspension that is well-tuned for our roads, you can drive fast and have fun while being less concerned about anything else unsettling your fun, which is usually bad roads. 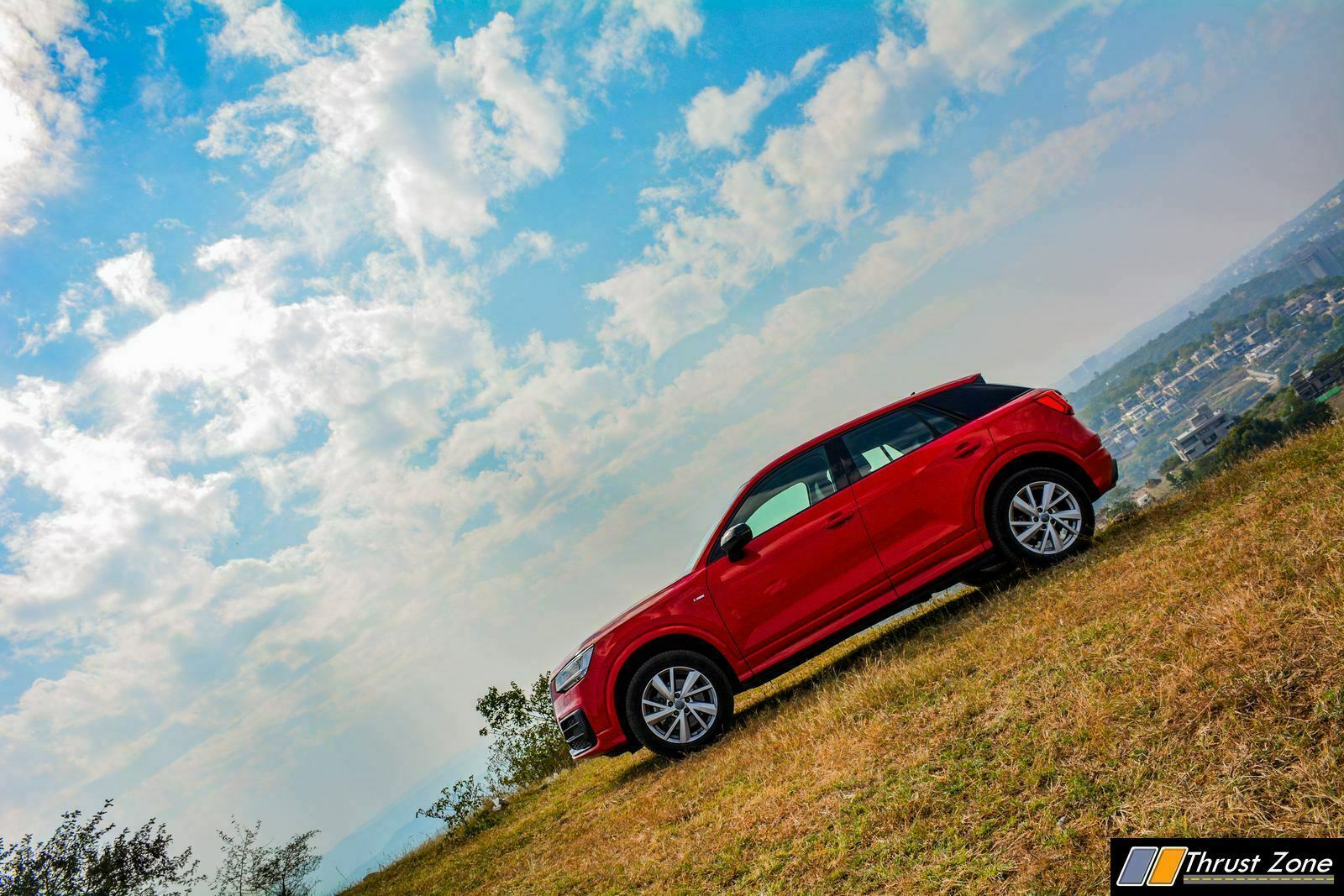 The Audi Q2 does start at a great price tag but ends on a very high note. Equipment is missing throughout the variants, but the Audi this times makes up with a solid powertrain on offer for the enthusiast to rejoice about. It is practical enough for an entry-level luxury car which also raises its appeal. If you want more value for money there always a great deal at the dealer or look at its competitors. 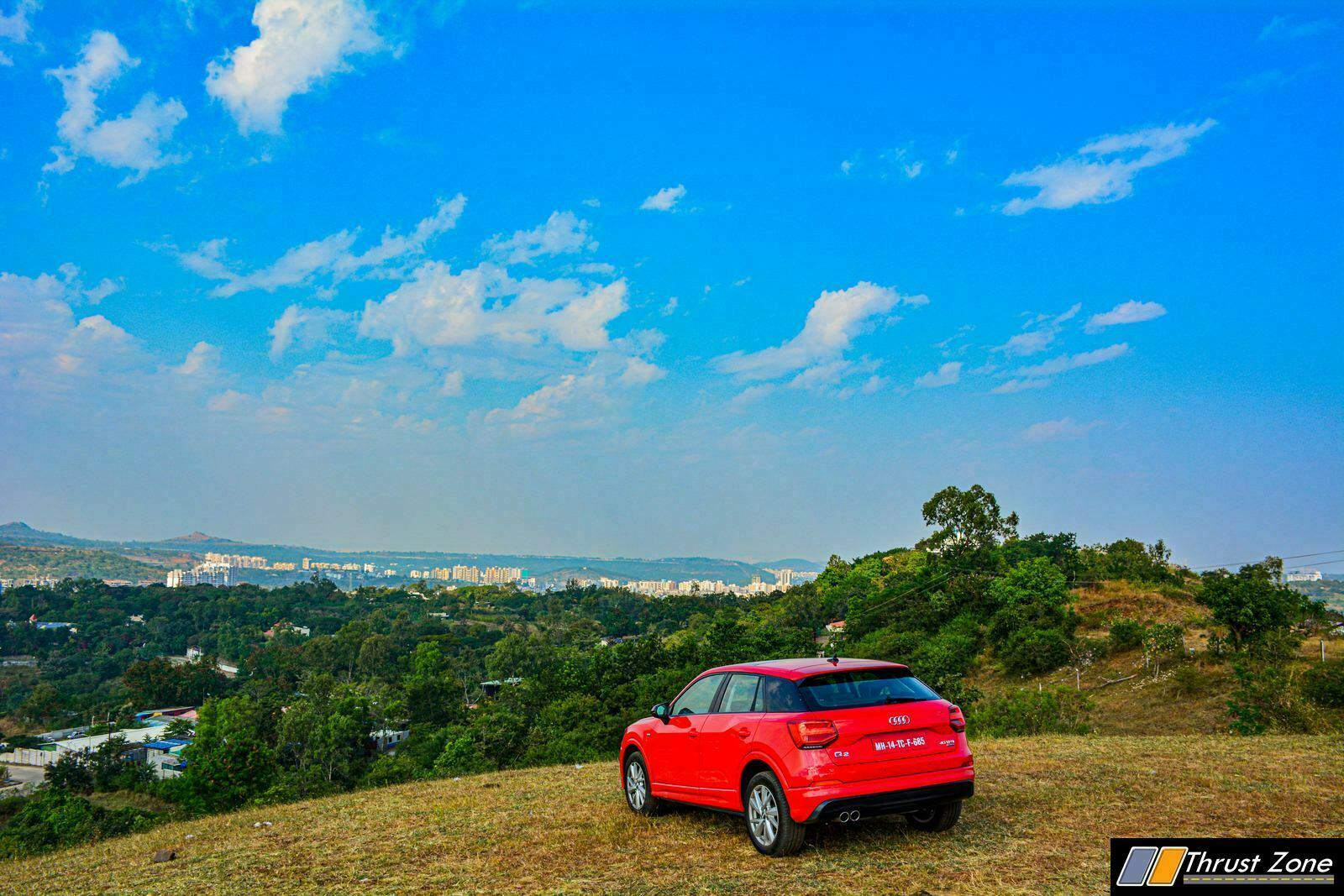 Currently, no direct rivals mean Audi has a bit of advantage. However, a comparison with entry-level SUV rivals such as BMW and Volvo make that comparison inevitable at the consumer end. There are enough pro’s for you to consider the Audi Q2 as this time there is a peace of mind with many services that the company has to offer that most consumers look forward with their high-end purchases.