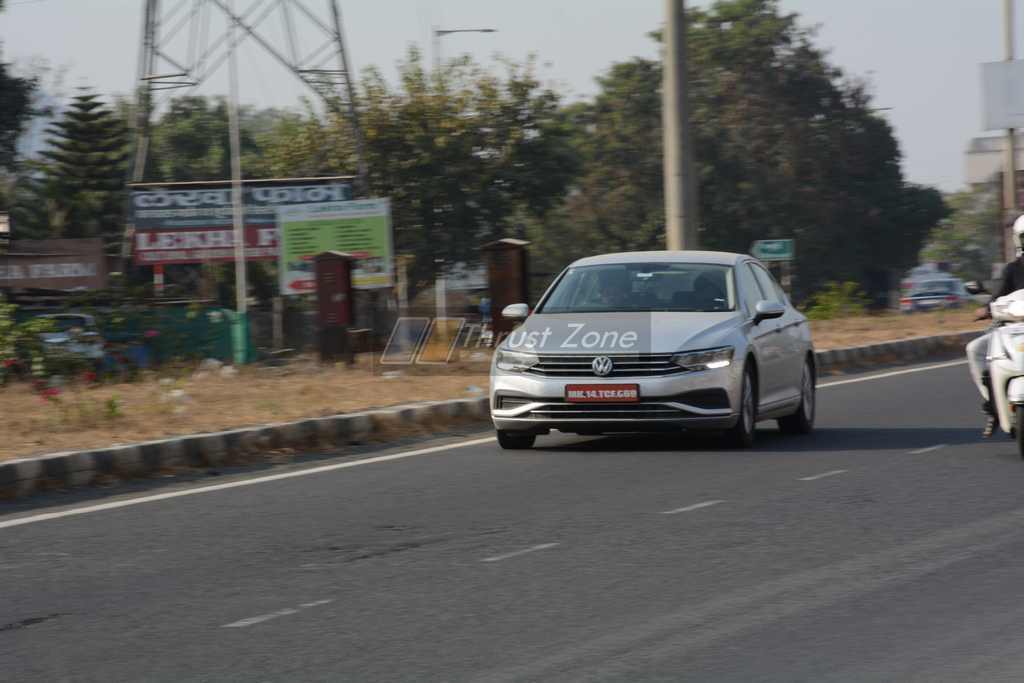 After getting done with the US and European market, Volkswagen eyes on bringing the 2020 MY Passat to India. The facelift model was recently spotted somewhere near Pune and has prominent changes visible on it. The changes cover both, the exterior as well as the interior alterations. For better and real-time results, the car had mock weights strapped to the front and rear passenger seats.

On the outside, there’s a new front bumper, grille and horizontal slats with chrome treatment. What else was there? IQ Light LED Matrix headlamps. At the back, Volkswagen has added a new tail lamp unit and revised Passat badging that runs throughout the boot. The car rides on 17-inch Aluminium alloys and optional 18- and 19-inch wheels will likely be available.

On the inside, there’s the new MIB3 based infotainment system that hosts a ton of features. Likes of integrated online connectivity unit with an eSIM by default, refreshed Digital Cockpit to treat the eyes and a capacitive steering wheel with features to detect the driver’s touch.

Of the complete VW line up worldwide, this the first time their car gets the aforesaid feature. No, not even the outgoing Passat has it. It will fit on certain Samsung phones and hence be used as a mobile key to open and fire-up the car. The safety net comprises of forward collision warning, autonomous emergency braking, pedestrian monitoring system, adaptive cruise control, lane-keeping assist and even rear traffic alert.

On the other hand, the new Passat will sport a 2.0-liter TSI, 4-cylinder, turbocharged petrol motor and will have it married to a DCT. It will likely pump 190 bhp of power and 320 Nm of torque. The numbers have changed as per the country and the tuning specifications. Without a second thought, the new car will be BS6 compliant. For the American market, the Passat sells for Rs 16.32 lakh for the base variant. In India, the car is likely to go for north of Rs. 20 lakh with the sales starting in Q2 of 2020.