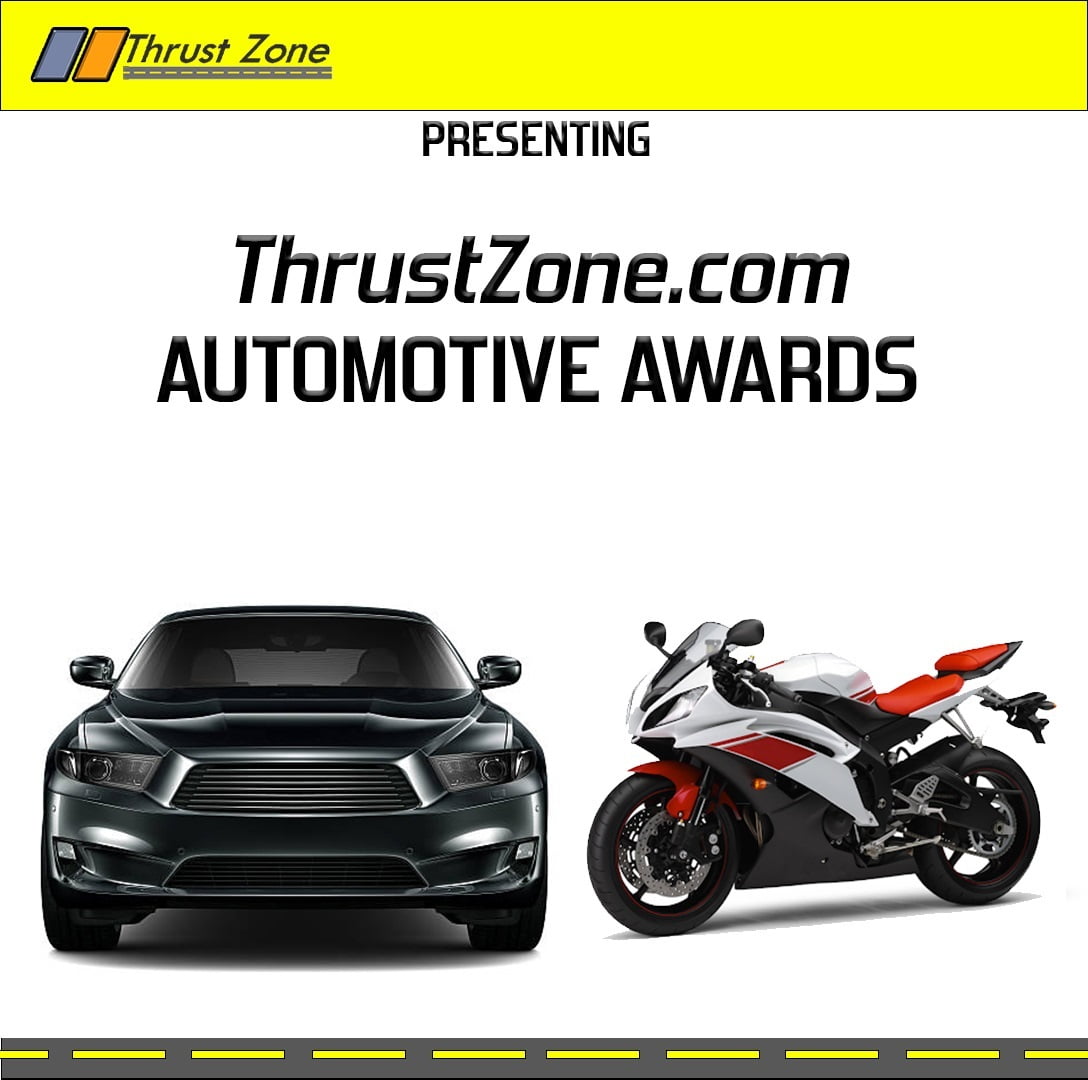 2021 Annual Thrust Zone award results are finally here! After a tremendous voting response by you guys, we have winners in our sight. This time the categories were similar but not identical. The industry did launch a lot of new products but even more, were facelifts and hence a lot of impressive products do not make to the list of voting or jury rounds. Like always, the jury goes through tough times to get you these results. This includes going through the reviews, loaning, and finding vehicles that we can get our hands on just in time. The reader’s enthusiasm encourages us to do so and we have finally compiled the list of reader’s and critic awards! Are you ready? Let’s go!

2021 Readers Motorcycle Of The Year 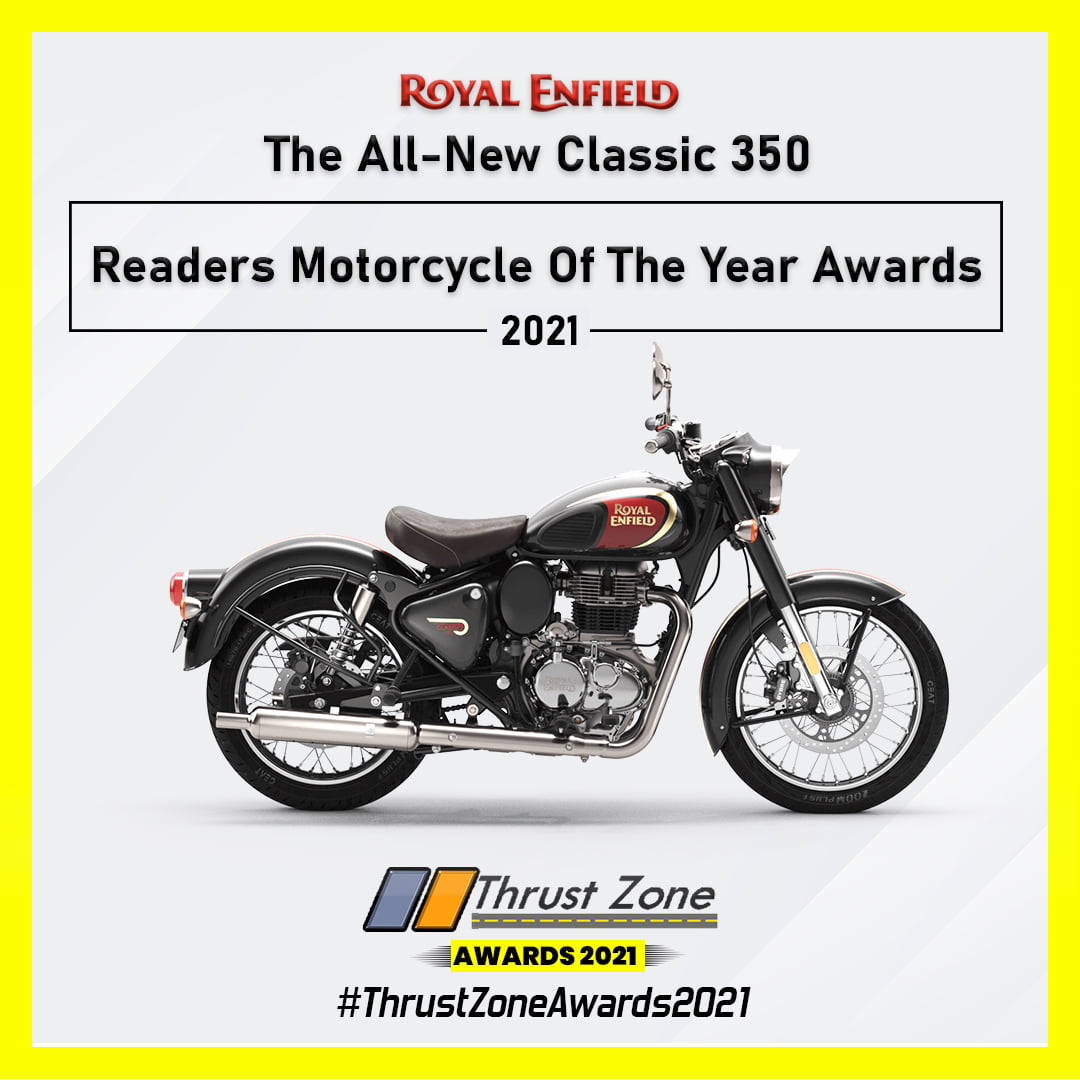 Readers Motorcycle Of The Year Awards for the second time goes to another Royal Enfield motorcycle. Last year after Meteor 350 took the crown, it is the Classic 350 that snatches it for the iconic motorcycle maker. The idea of keeping the Classic, well, classic, the boys at Enfield made sure they did not mess with the original idea and just delivered refinement, ease of use, and ride quality which is unmatched in this segment. The readers are impressed and we are also happy to see Royal Enfield take this one home!

2021 Readers Scooter Of The Year 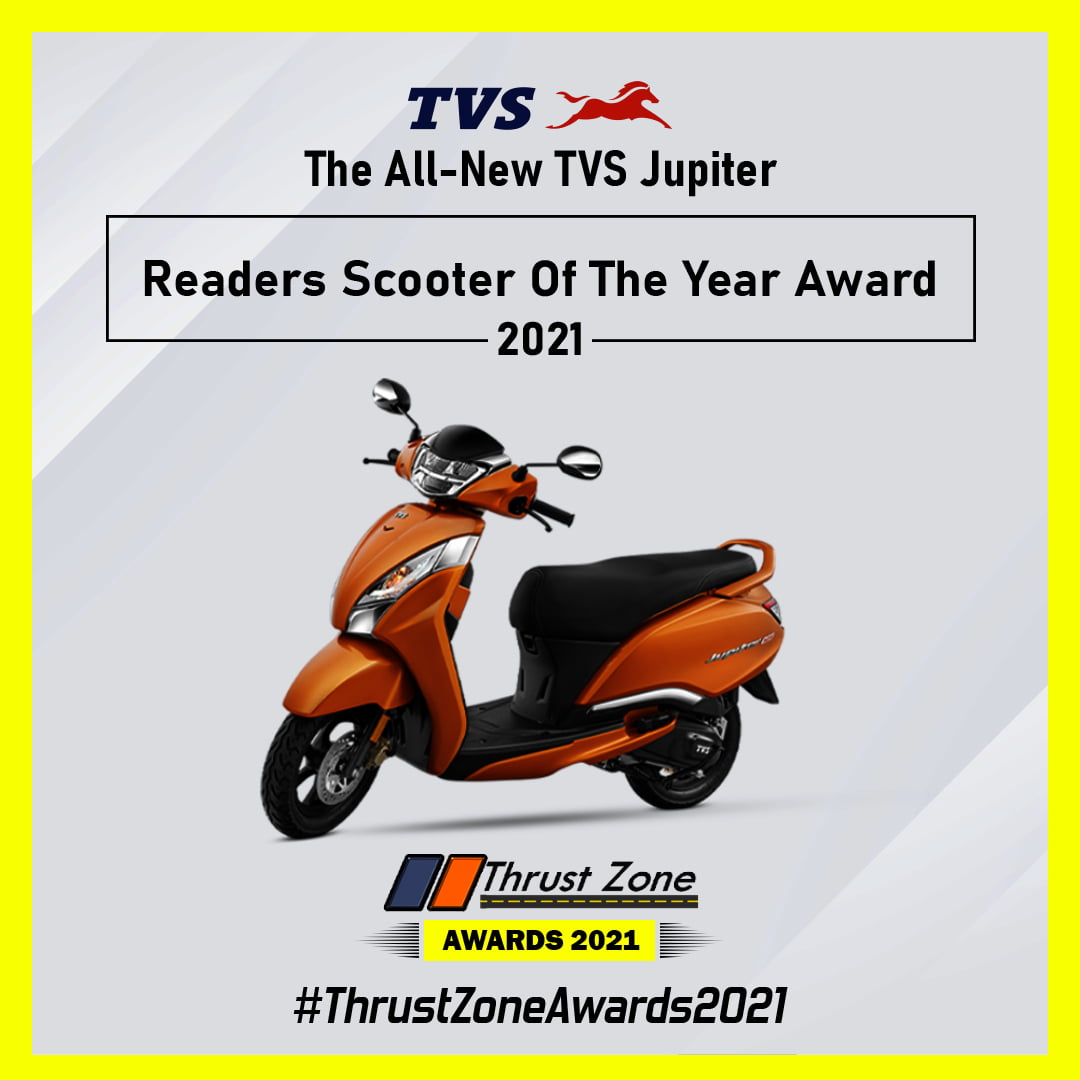 The TVS Jupiter became a household name shortly after its launch 9 years ago. Slowly and steadily TVS kept the pace and brought in the new and highly awaited 125cc variant of the scooter and a grounds-up innovation around the scooter made it 2021 Readers Scooter Of The Year! TVS Jupiter 125 is promising, high on deliverables and value to its customer. As always, the public voted for its favorite scooter. Congratulations TVS, Keep it up! 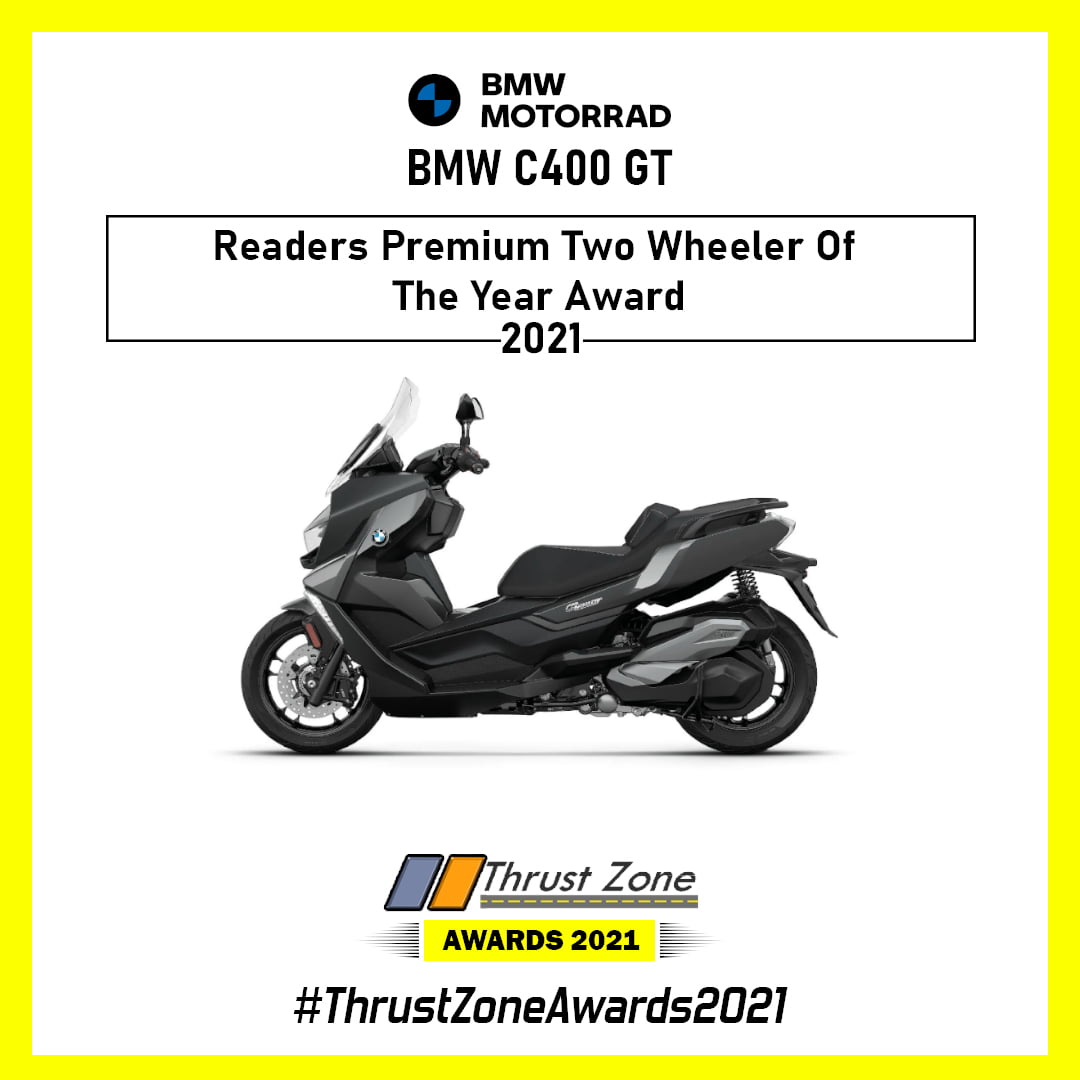 Second-year in a row, BMW Motorrad India takes the crown for the premium two-wheeler of the year. This time it is the BMW C400 GT that seems to have taken the public by surprise. A 10 lakh rupee luxury and a super scooter that can keep up with quarter-liter motorcycles from a decade ago is a winner with other competitors closing in for votes. Congratulations to team BMW Motorrad India and we cannot wait for next year’s big move already!

2021 Readers Four Wheeler Of The Year 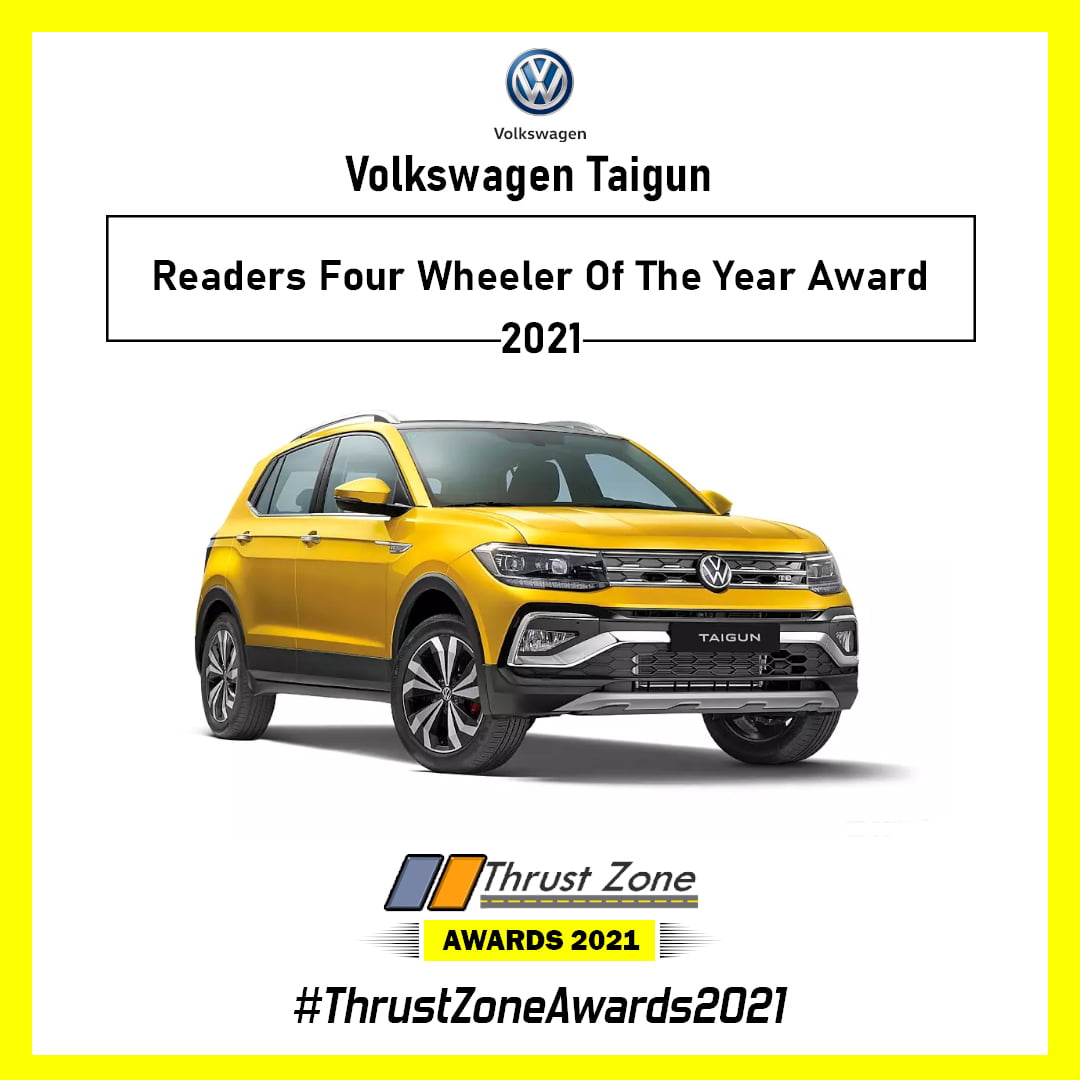 Volkswagen Taigun impressed us a lot when we first drove over all its rivals and its cousin sibling. You guys have gone ahead and voted for the same too! The Taigun is the most dynamic, fun-to-drive, European SUV in the market at a budget price that fits most car buyers in the country. A lot of them are on the road and it seems that they are in many hearts too and it wins fair and square by a big margin over all its rivals in our voting. Volkswagen is back with a bang! 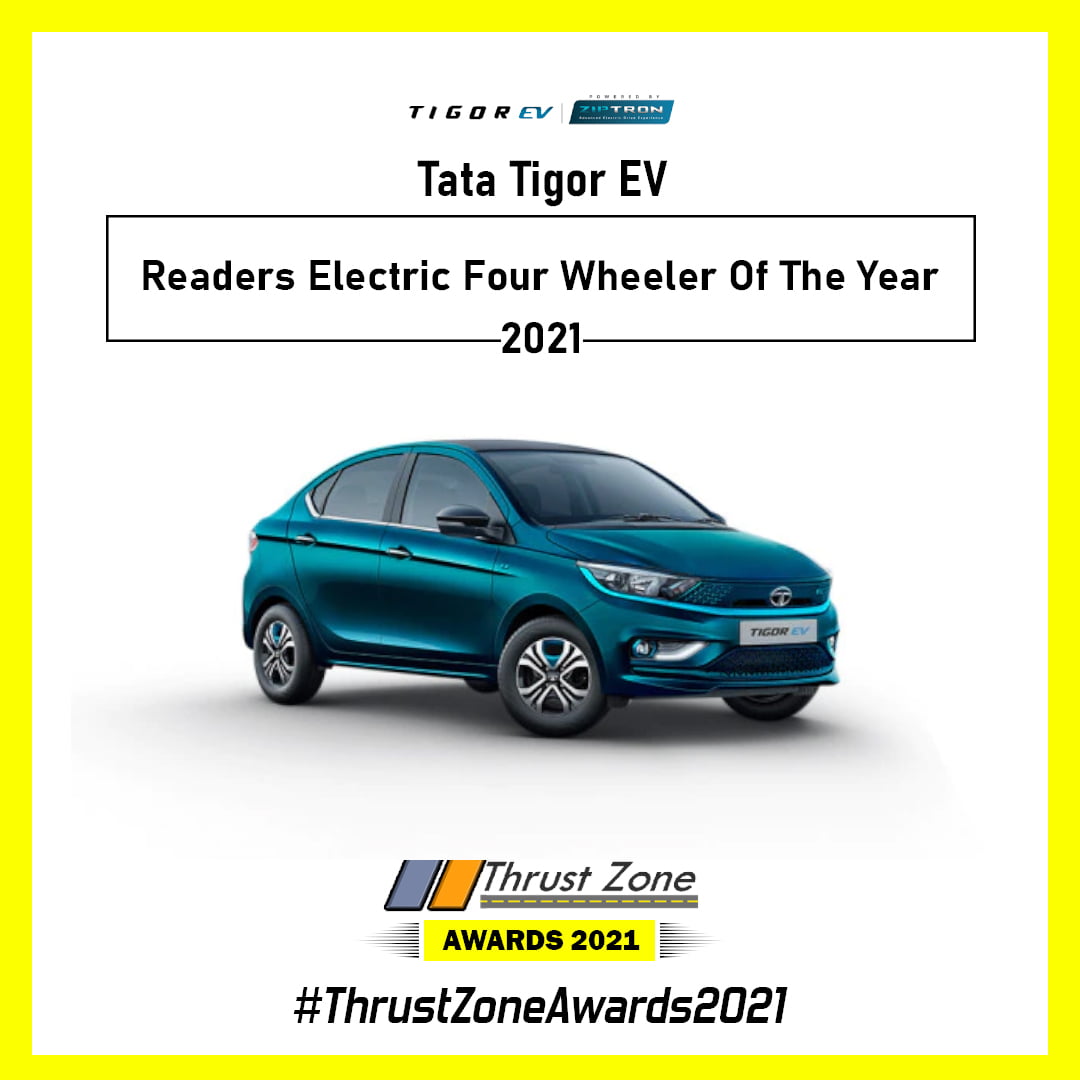 The launch of the Tata Tigor EV signaled success and that seems to have taken forward in our voting as well. The Tigor EV has won the 2021 Readers Electric Four Wheeler Of The Year by a subtle margin as the other electric cars came very close to the Tata. It had us impressed with its capability and range in our review which was solely testing its range in Mumbai City’s thick and thin traffic throughout the day. Well deserved award for the Tata smallest Ev! 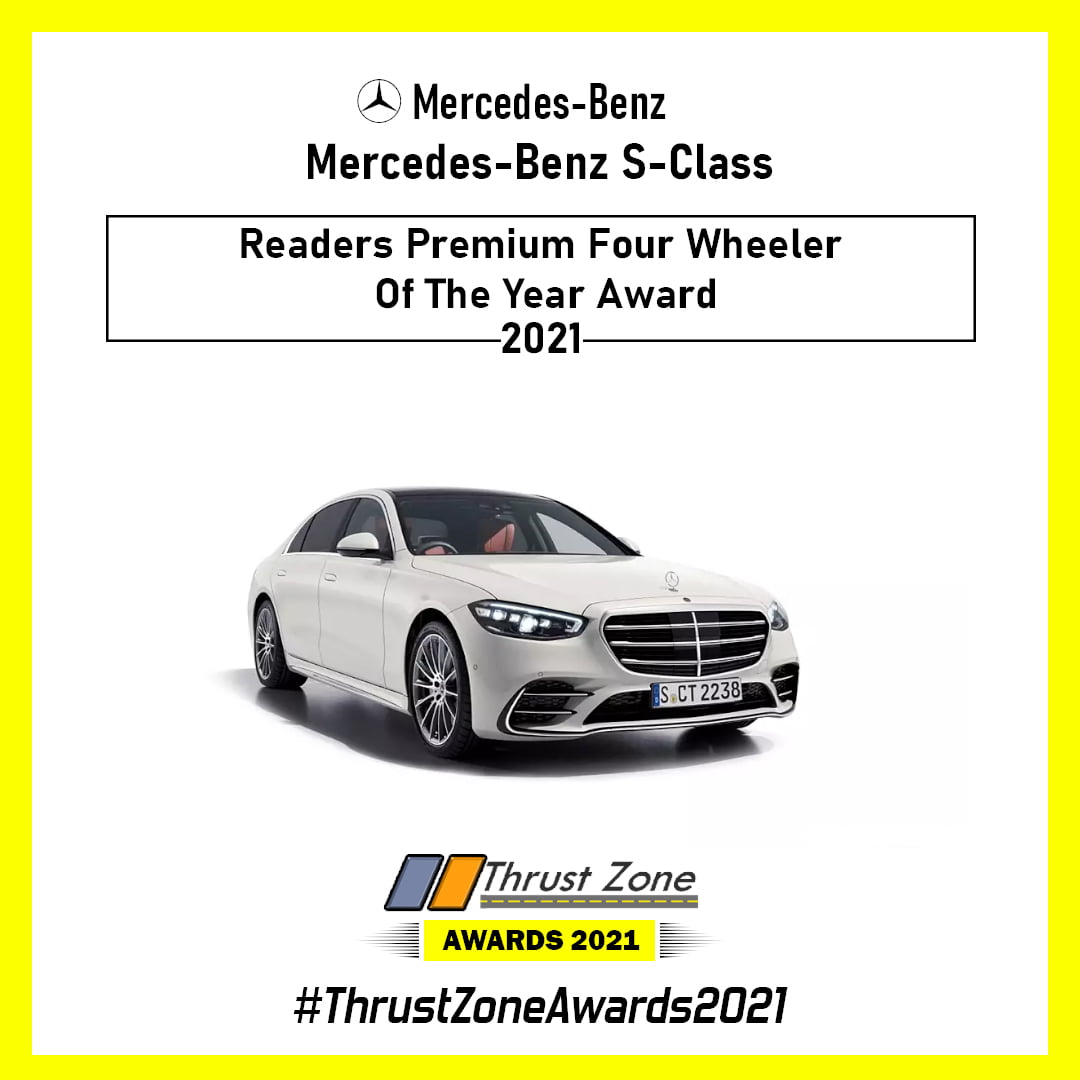 The best car in the world won the award for 2021 Readers Premium Four Wheeler Of The Year fortifying its position and its iconic marketing slogan in the hearts and minds of customers. Winning our award by a big margin in the voting shows the unhinged love for the Sonderklasse which takes the game higher every single time with an upgrade. The S-Class drives like a big car but is as easy to drive as a C-Class. Supreme comfort and technology on offer take the game forward in this segment yet again. The star shines bright at our awards. 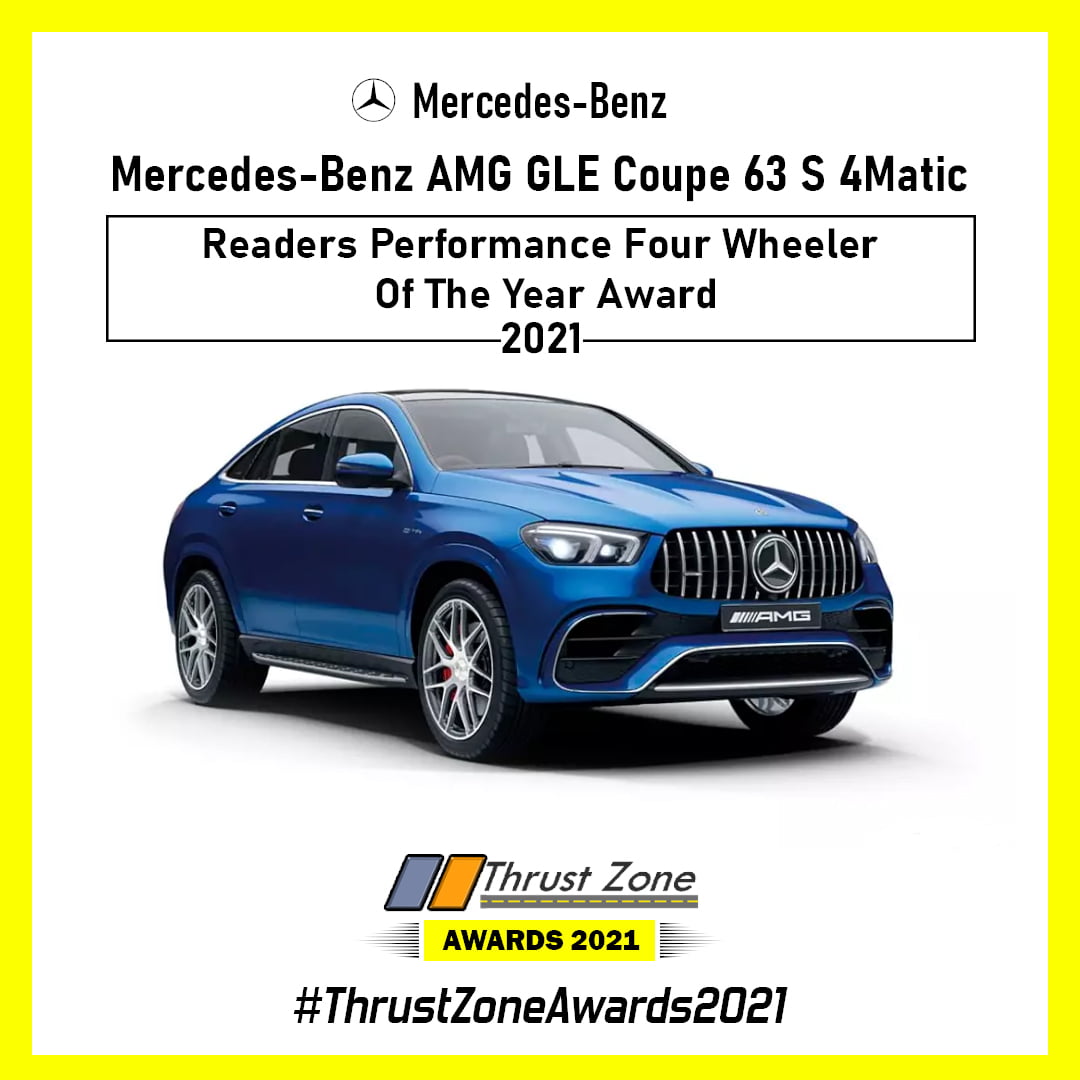 The crowd has called in their favorite answer. This coupe SUV with its big engine and long name wins the award as it appeals to the public like how it does to the enthusiast. SUVs are a rage and a no-compromise, hardcore V8 seems like a favorite for the masses. With its wall poster-worthy radical design and numbers that you can crunch all day and drool about, it takes the award after a tough fight in the polls. 2021 Readers Performance Four Wheeler Of The Year award goes to Mercedes-AMG GLE Coupe 63 S 4Matic! 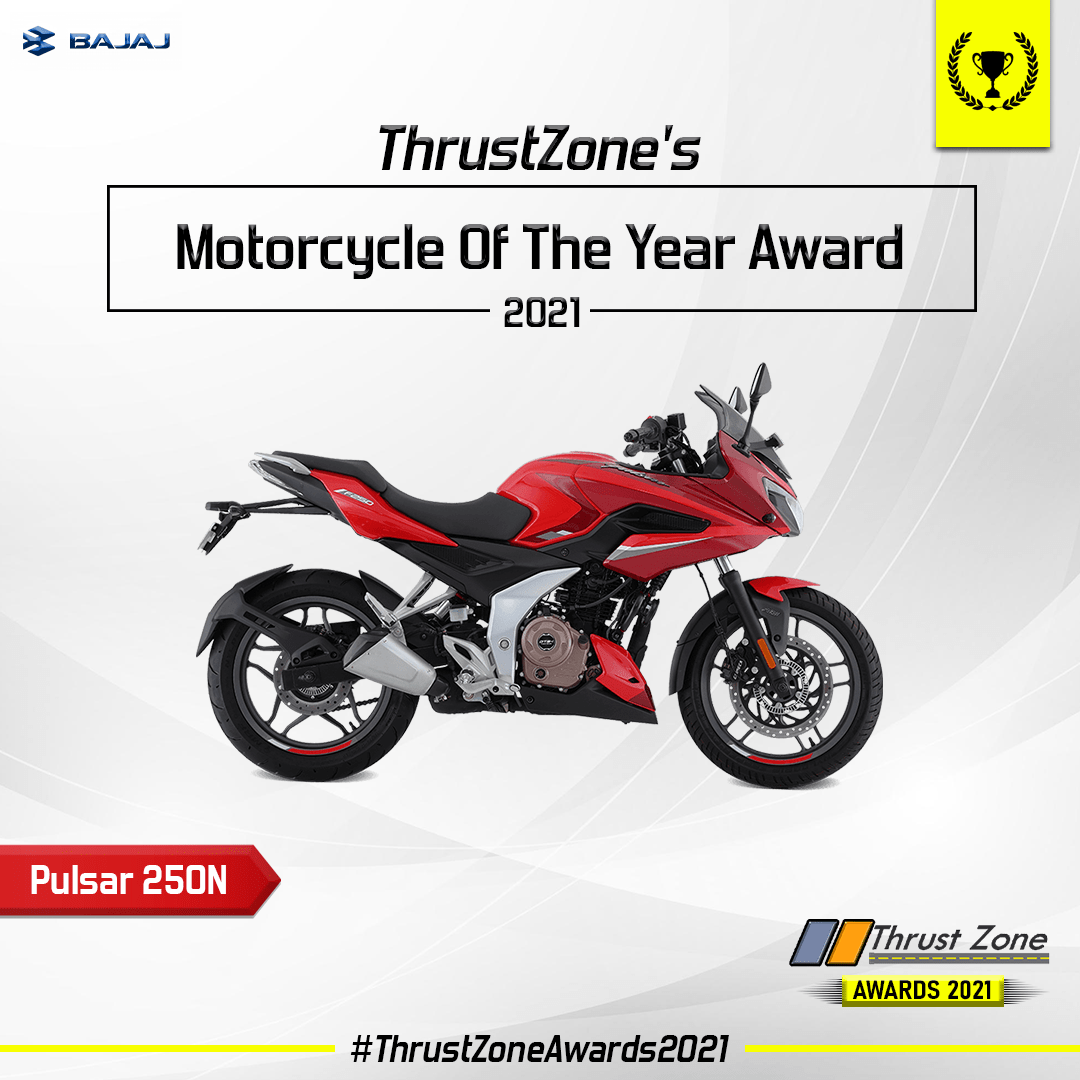 ThrustZone’s Motorcycle Of The Year
The Bajaj Pulsar’s comeback as the Pulsar 250 wins the jury’s vote, hearts and minds with its ability to tour, commute, and ride hard all day long without breaking a sweat! Handling and performing like the segment-best motorcycle on the road just like how it did on sales chart since day. These abilities made us choose it for ThrustZone’s Motorcycle Of The Year. 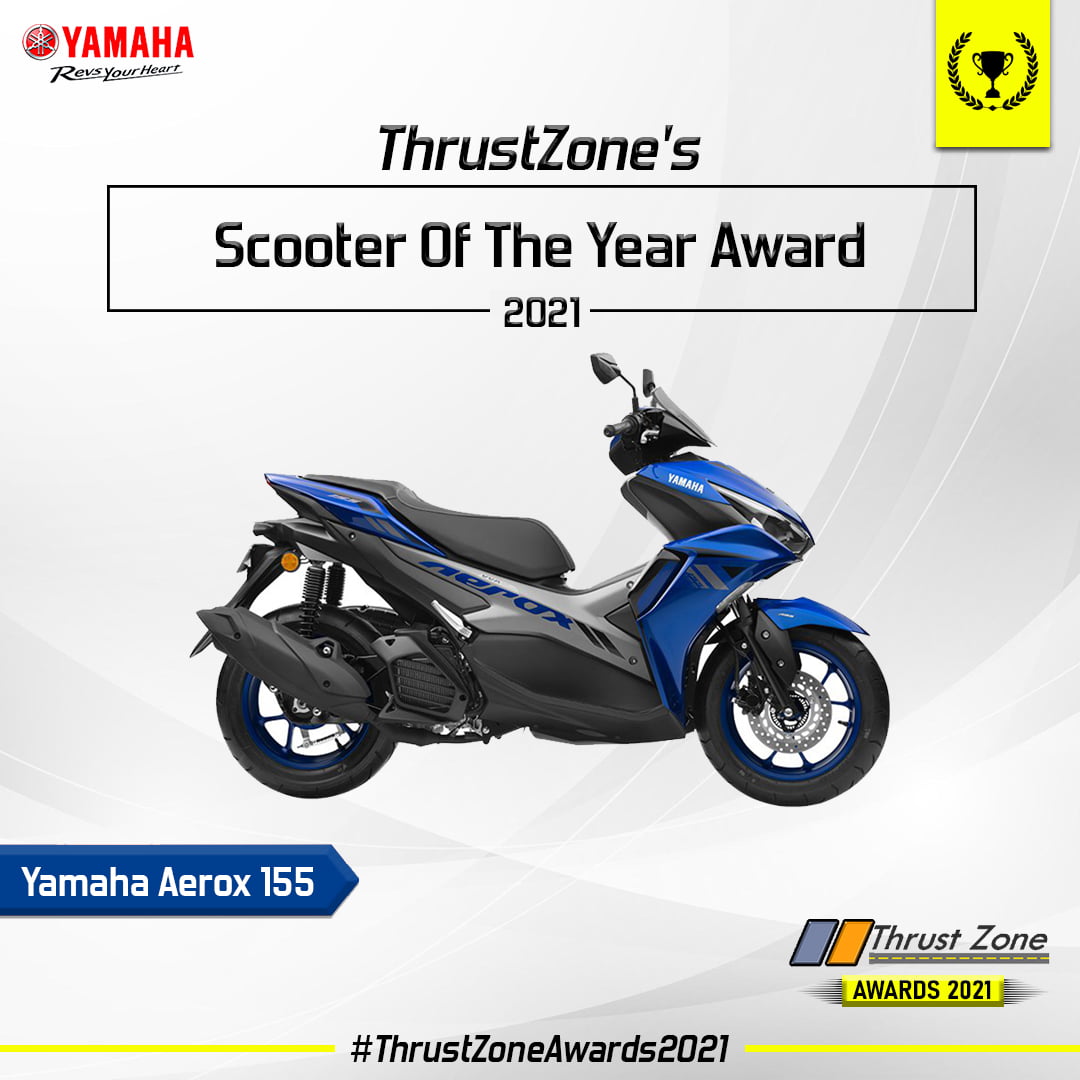 ThrustZone’s Scooter Of The Year
Love at first ride, our entire team was blown away by various factors of the Yamaha Aerox 155’s ability! Votes added up and the Yamaha Aerox 155 wins our ThrustZone’s Scooter Of The Year. With a powerful engine, fun to ride dynamic package, packed with technology it is a no-compromise scooter that no enthusiast can ever ignore. 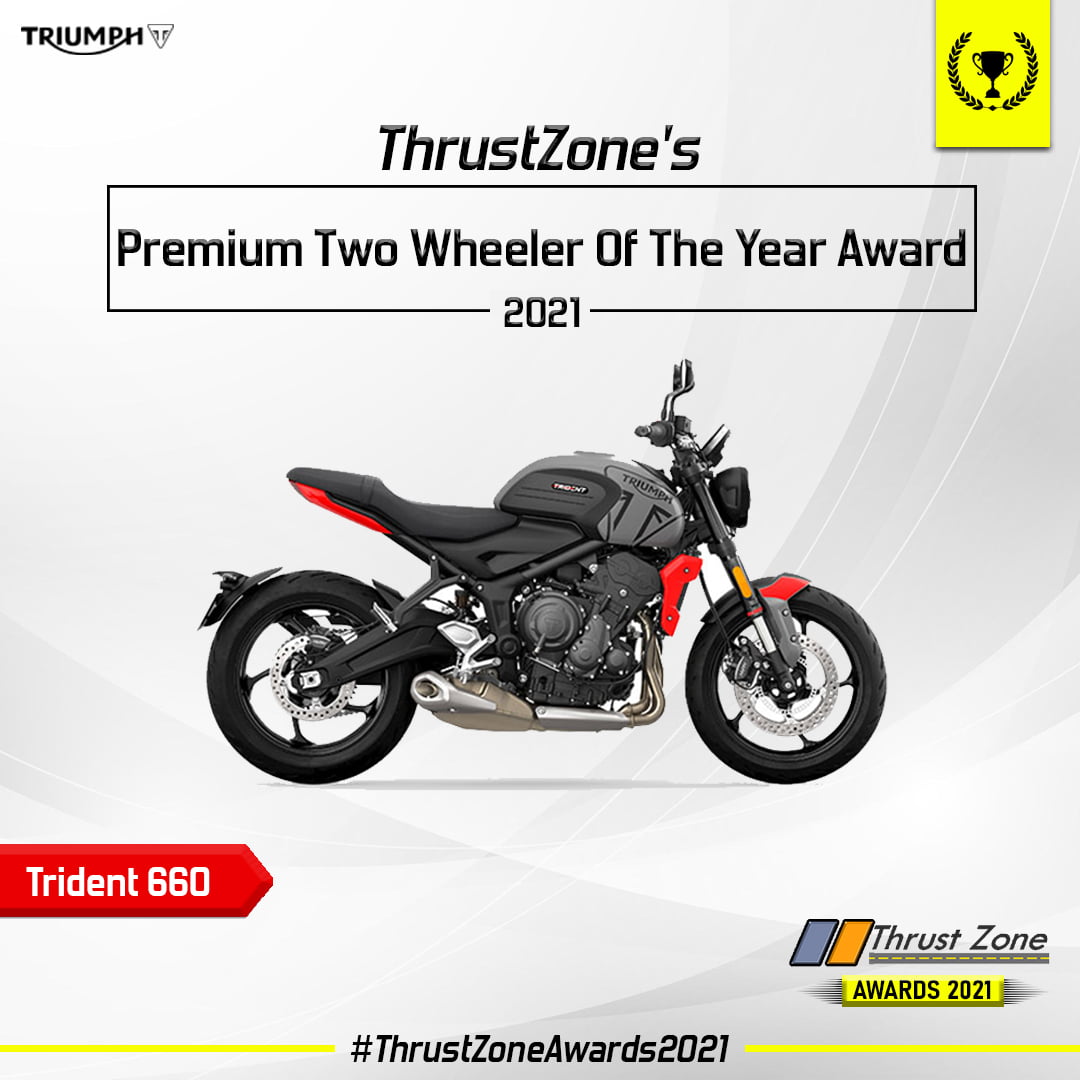 ThrustZone’s Premium Two Wheeler Of The Year
A test ride of the Triumph Trident 660 and we were sold on why this is the big superbike that everyone will want to upgrade to from quarter-liter or middleweight! Triumph’s legendary way of making motorcycles is easily evident here. The way it handles, sounds, and connects with the rider is pure 100% Triumph and hence without a doubt, it is our ThrustZone’s Premium Two Wheeler Of The Year. Second-year in a row for Triumph India! 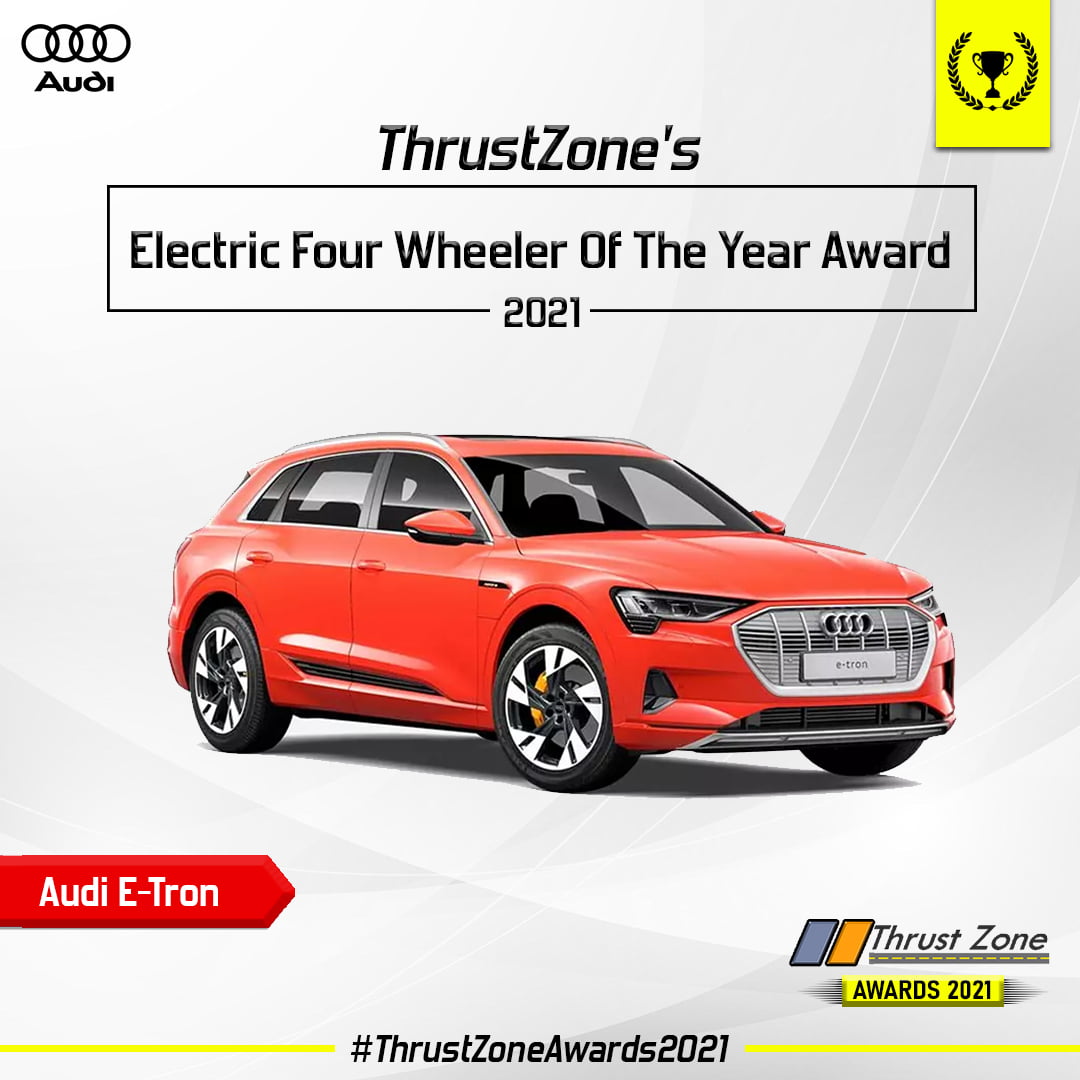 ThrustZone’s Electric Four Wheeler Of The Year
Audi E-Tron blew us away at first drive with its ability to do it all for Indian conditions. The way it delivered its power, performance, and package to prospective customers was nothing short of a masterpiece considering it fits like a glove for our conditions. Excellent practicality, price to performance ratio and acing every aspect over its rival made us choose it as ThrustZone’s Electric Four Wheeler Of The Year. 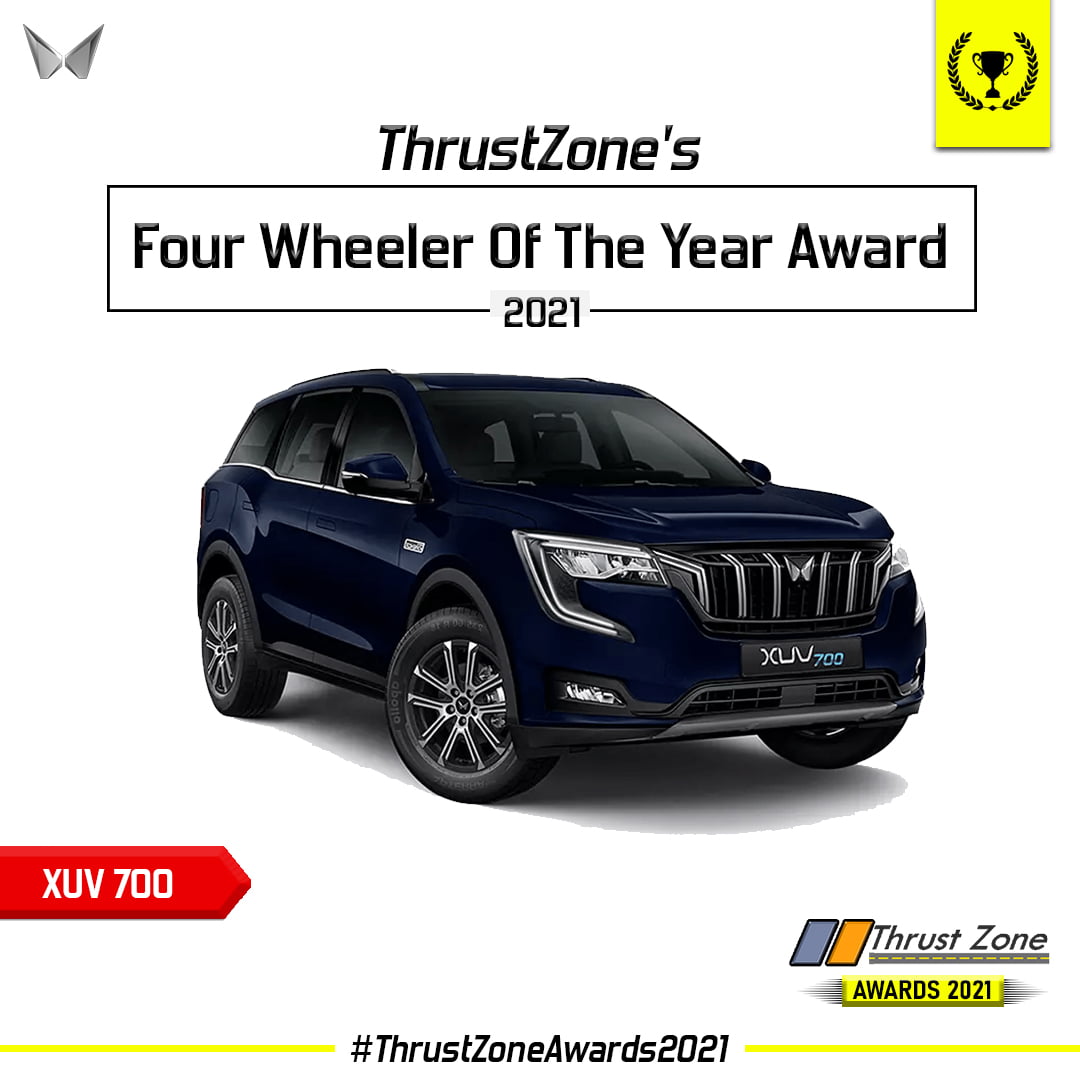 ThrustZone’s Four Wheeler Of The Year Awards
Second-year in a row, Mahindra takes away ThrustZone’s Four Wheeler Of The Year Awards for its superbly packaged XUV 700. Not replacing the XUV 500 for now, but coming as an entirely new SUV that shook the market with its ability, price, technology, safety, and performance, making the auto journalist job harder and harder to fault every time Mahindra comes up with a flagship! In return, making it easier to win awards like this. The Mahindra XUV 700 came, saw, and conquered the market, forever! Kudos to the Mahindra team for putting in the hard work that is seen on their homegrown flagship vehicle! 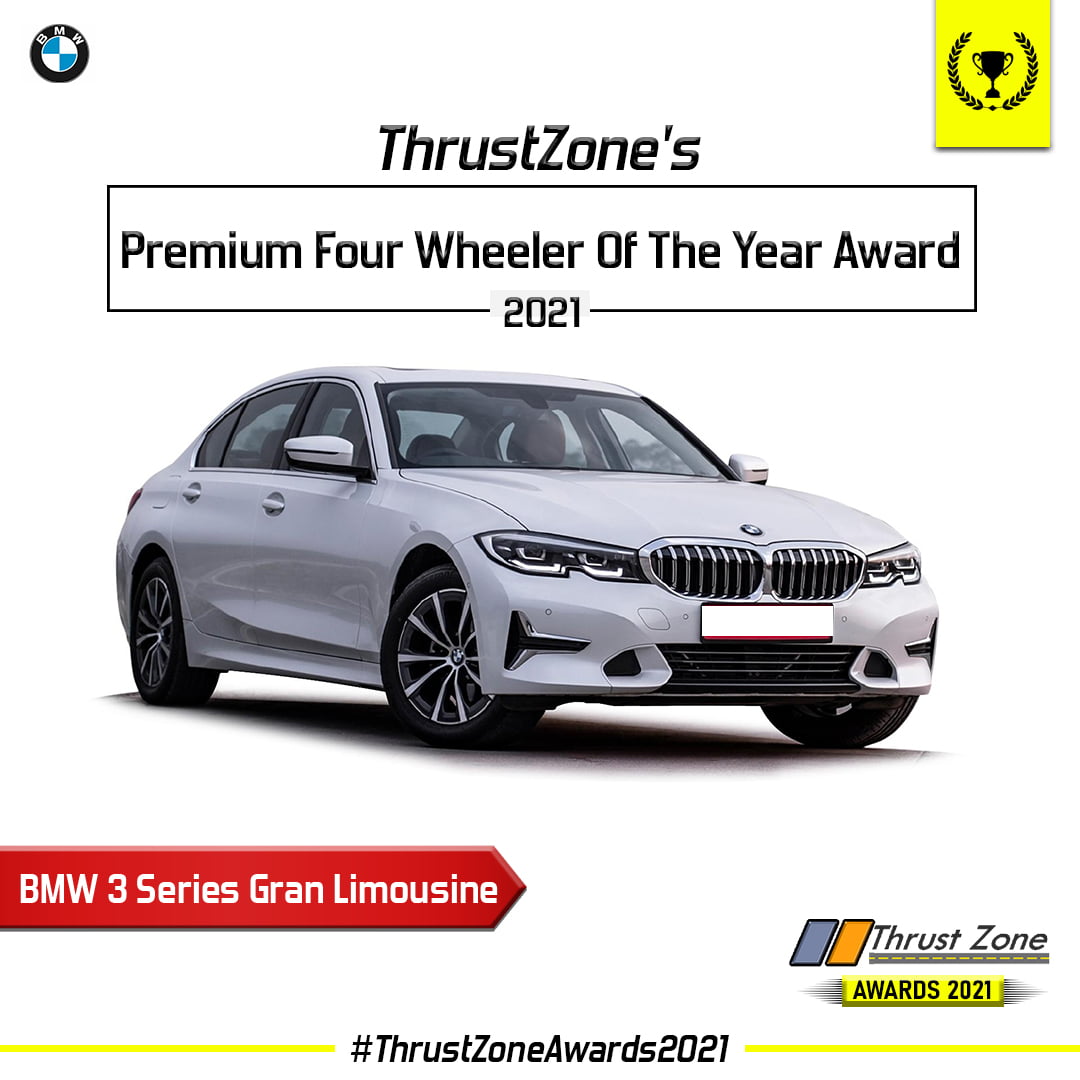 ThrustZone’s Premium Four Wheeler Of The Year
BMW’s entry into the world of a Long wheel base in the entry-level segment showcased that it can play the LWB game right, with its own rules. Entry-level sedan with an LWB, the 3-Series Gran Limousine became an instant hit with Indian luxury car buyers. It impressed us with seamless integration of the LWB design in the 3-series and typical BMW traits such as very good dynamic capability with luxury and most importantly, space. The BMW Gran Limousine impressed all of us here and easily takes away the ThrustZone’s Premium Four Wheeler Of The Year. 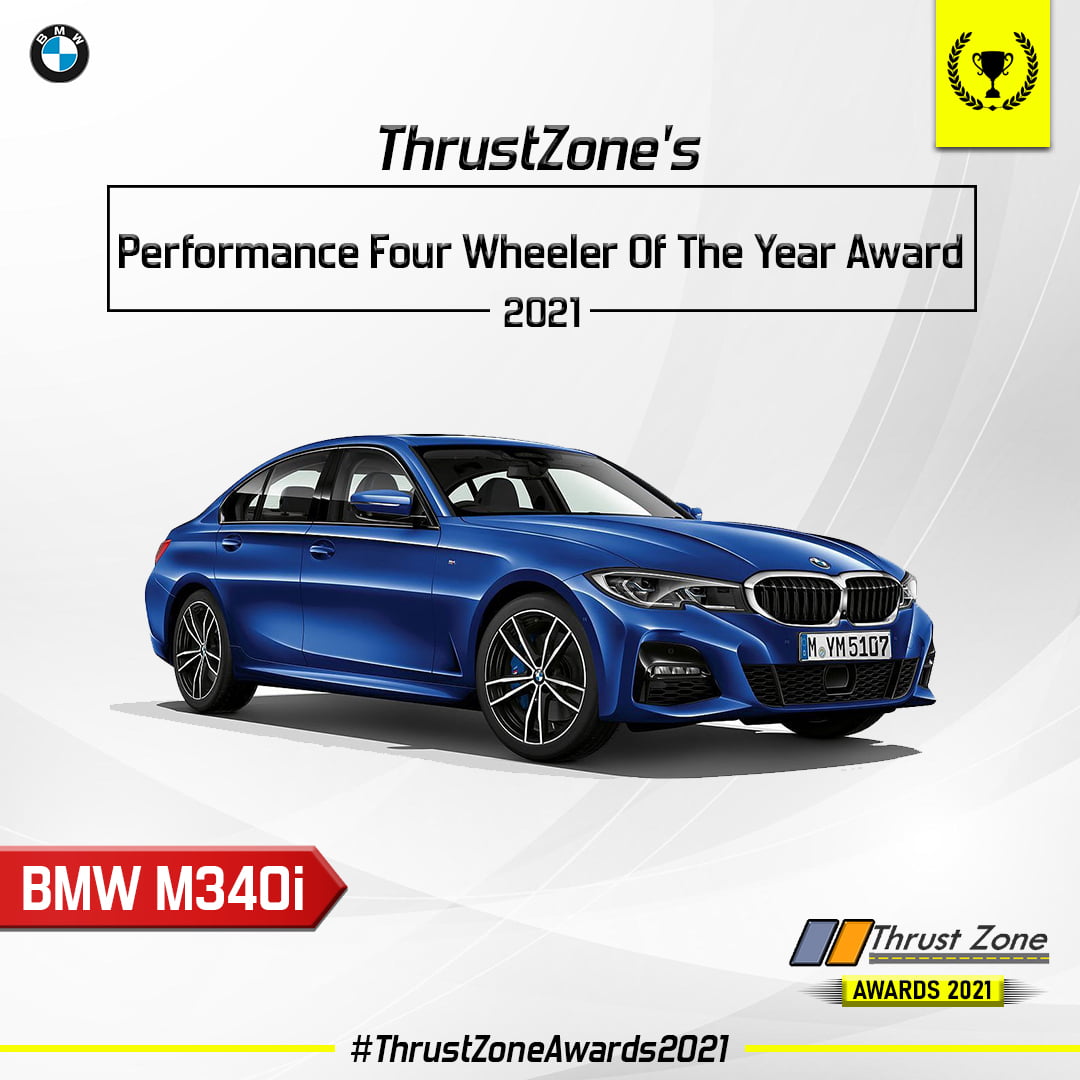 ThrustZone’s Performance Four Wheeler Of The Year Awards
Again, a BMW that took us by surprise and yes, it is also a 3-Series based car. xDrive and iconic straight-six engine made the M340i irresistible after a test drive on open and twisty roads! The soundtrack, the handling, the instant and stupendous acceleration of the line are truly engraved in our hearts and minds, forever. A token of appreciation then for the M340i as it takes away the trophy in a new category of our awards. A category where it fought a tough battle and aced it by taking home the ThrustZone’s Performance Four Wheeler Of The Year Awards.

Thank you for being part of this journey where we put in a lot of effort to declare our favorite of every year as we continue to witness the reader’s and manufacturers’ support. Stay tuned for everyday news, reviews, and action from the automotive world.