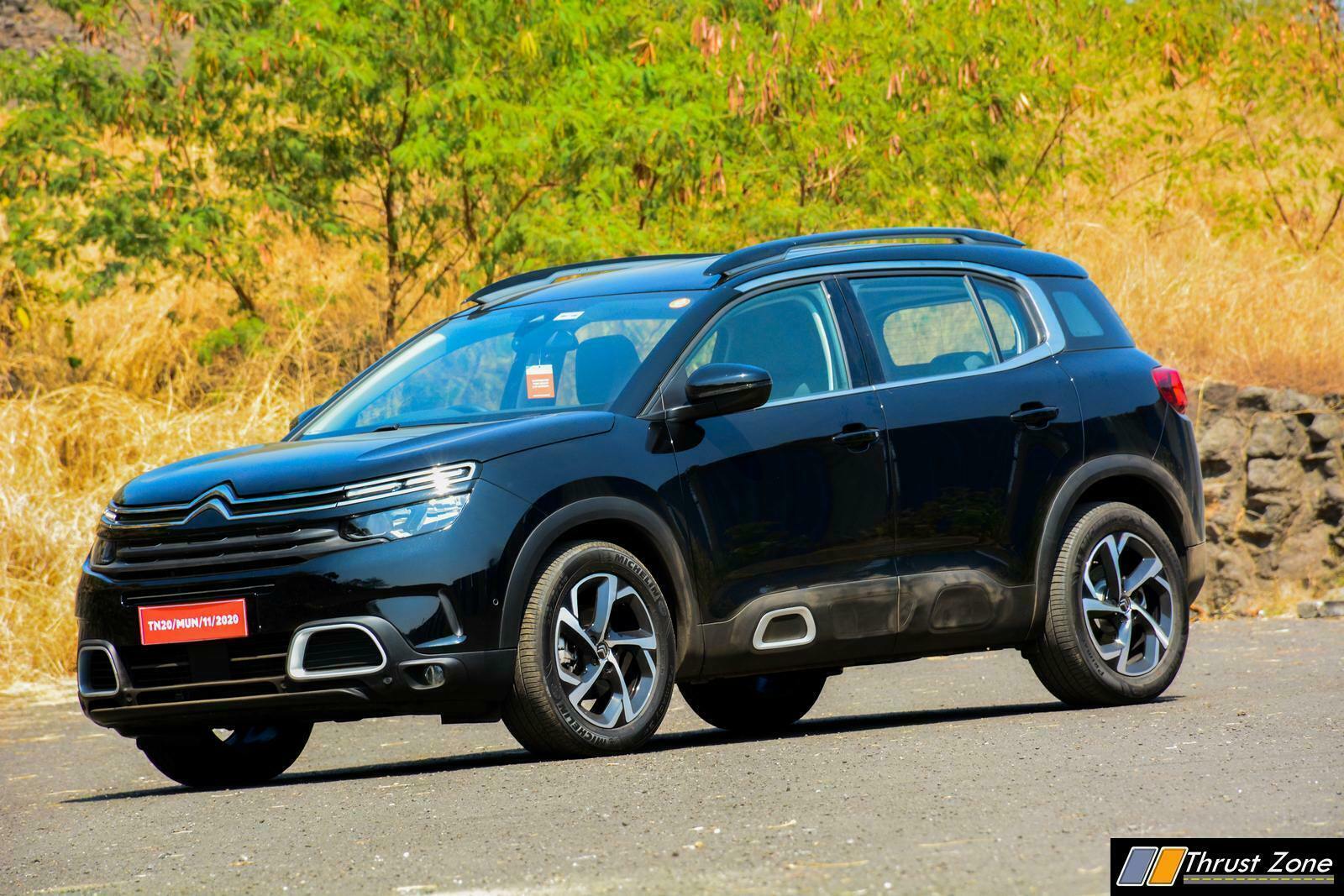 There was a time when a new brand entry was limited to once a decade. Indian market just saw many brands ready to come in the Indian market in the last five years already! Citroen was one of them when they confirmed in 2017 that they are readying India operations. 2019 was when they were ready with products and planning and then when the time came to execute, the pandemic stepped in. Still, in the midsts of it, the manufacturer has now given us their first car to drive. The C5 Aircross. The crossover we told you about extensively earlier and over the course of time. We finally drove it and now we have a good first impression of the car after spending a day with it! 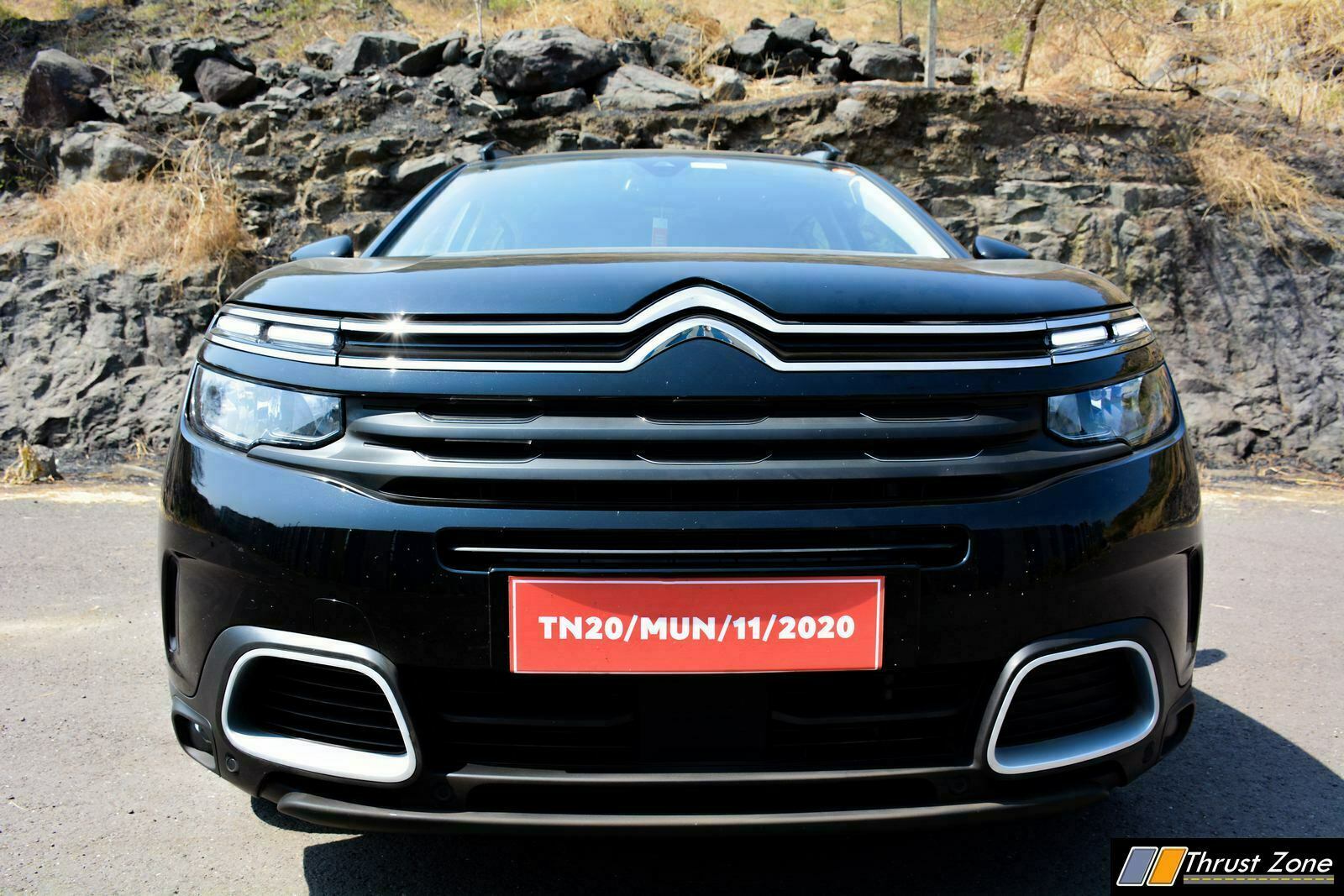 The front profile is quite intimidating with its size but the elements are simple with horizontal lines, the Logo catching attention along with small LED DRL on the top and the lower section of the same bumper houses the headlamp. The lowest part has the fog lamps which are cornering lamps as well. They also house two pockets of vents to give it a modern look. The side profile with large 18-inch wheels give it a true-blue ‘i am a European crossover on Indian road’ look. The large doors and glass area with a C-profile kink running from A-pillar to the C-pillar also is a major highlight. The rear and shoulders are muscular and it does represent a tough look without being in your face. The tail lamps are very futuristic and unique in the class with four elements on the inside and they are LED so they do grab attention. 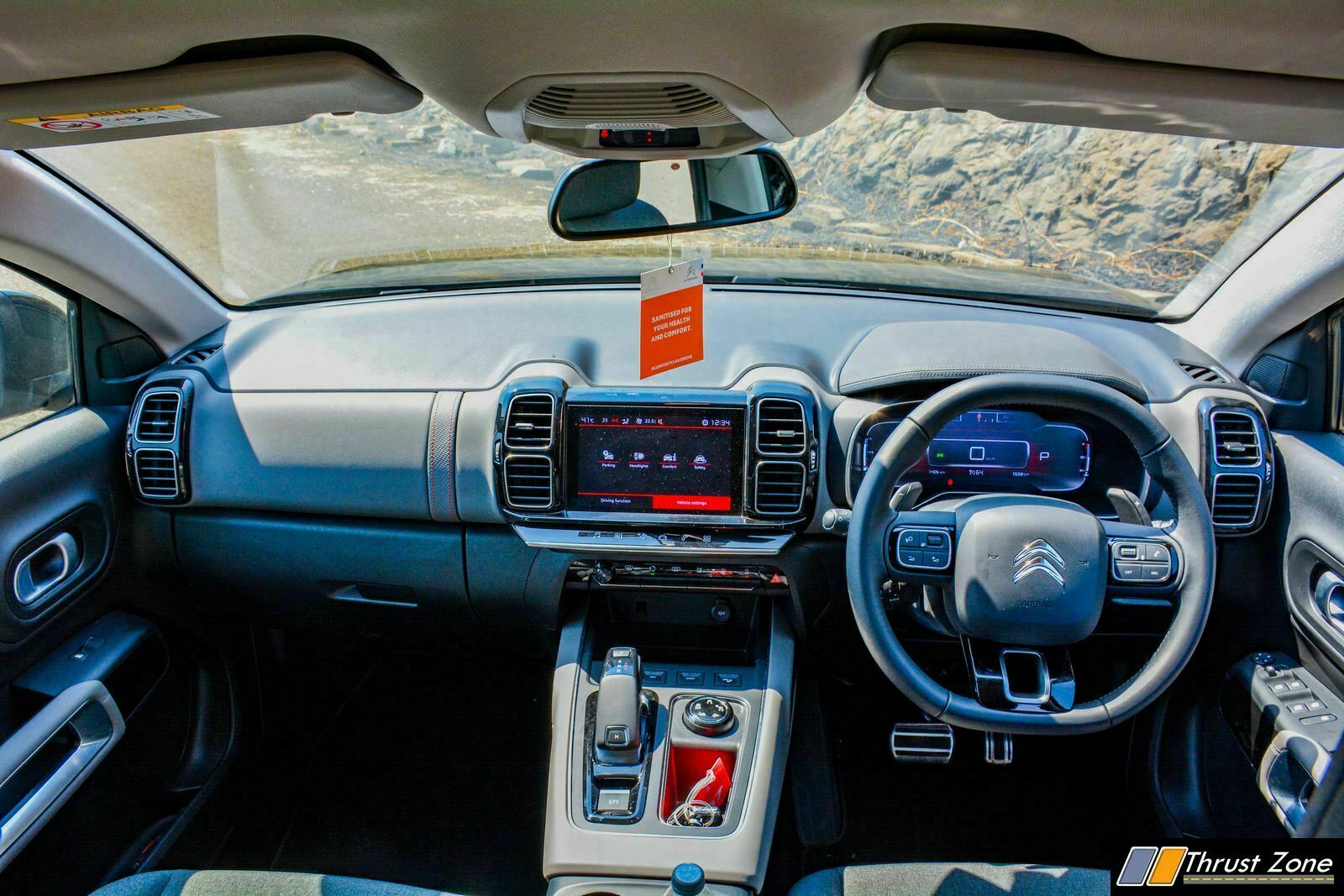 Inside, we found something rather odd. The door pads have soft-touch material, meanwhile, the upper part of the dashboard isn’t as soft as the aforementioned. Usually, it is the other way around. We assume the driver hand should stay comfortable when it is on it while he is in the ‘comfort’ mood of driving is what Citroen had in mind. The upper part of the glove box on the dashboard has stitching and an element that resembles a fashionable handbag which the country is known for making around the world. Speaking of the glove box, it is small in size and some internal part takes most of the space.

The seats have to be applauded for really good lower and upper back comfort which Citroen says have a special foam, much better overall than their rivals. Front seats though could have had more under-thigh support for taller passengers. Space in the back when it comes to knee, shoulder, leg and headroom is on par with its rivals and could have been better. 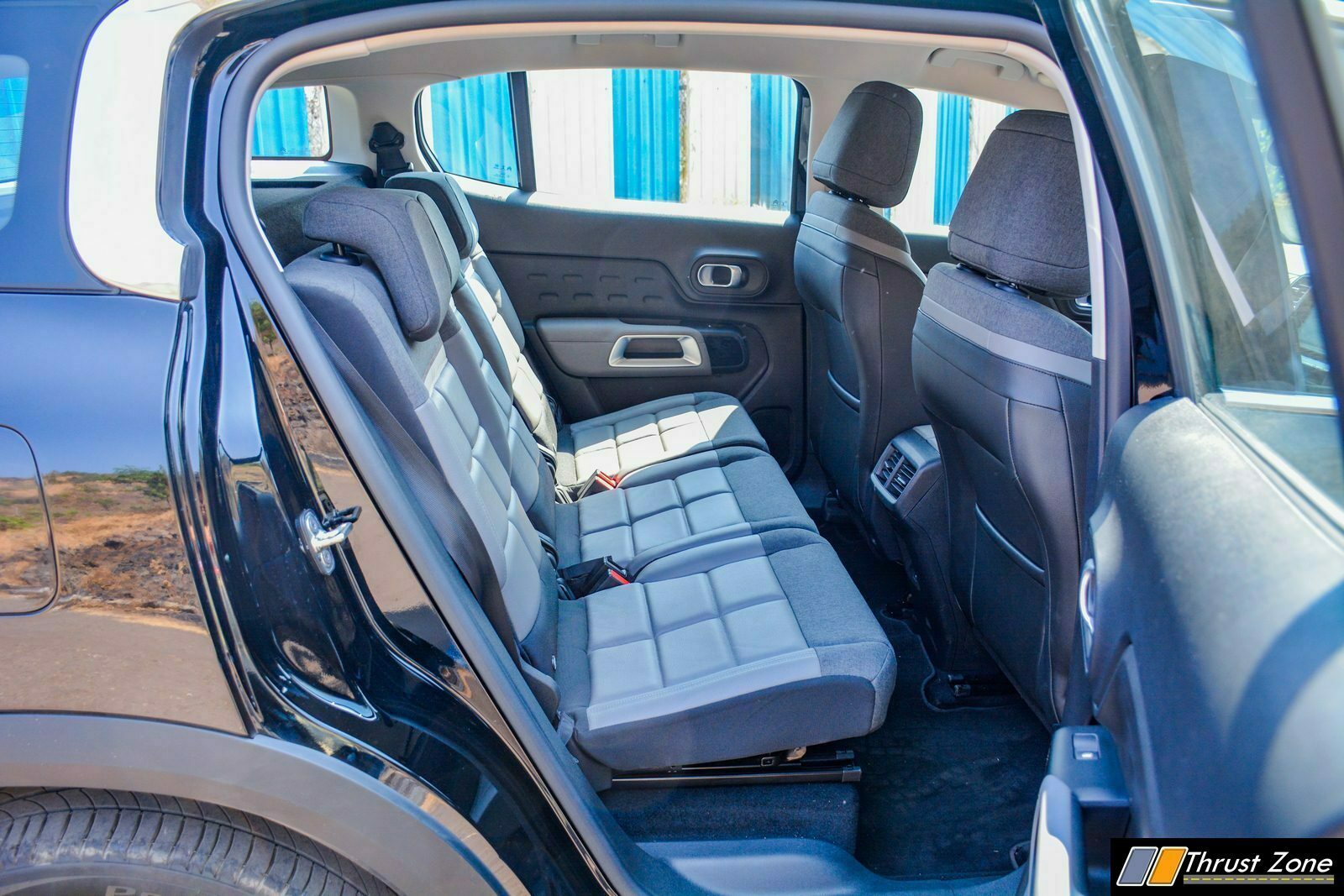 D-segment cars have a global focus, lack the outright space that we expect in India is hence missing, none of them is the best. However, the extra comfort the Citroen offers makes up for it. A reason why we love the time spent in the car. The Citroen C5 AirCross features list includes the LED daytime running lights, ORVM-mounted LED turn indicators and LED taillights. The Shine variant gets hands-free electric tailgate LED Vision projector headlamps and a panoramic sunroof which wasn’t there on our car as we drove the Feel variant. 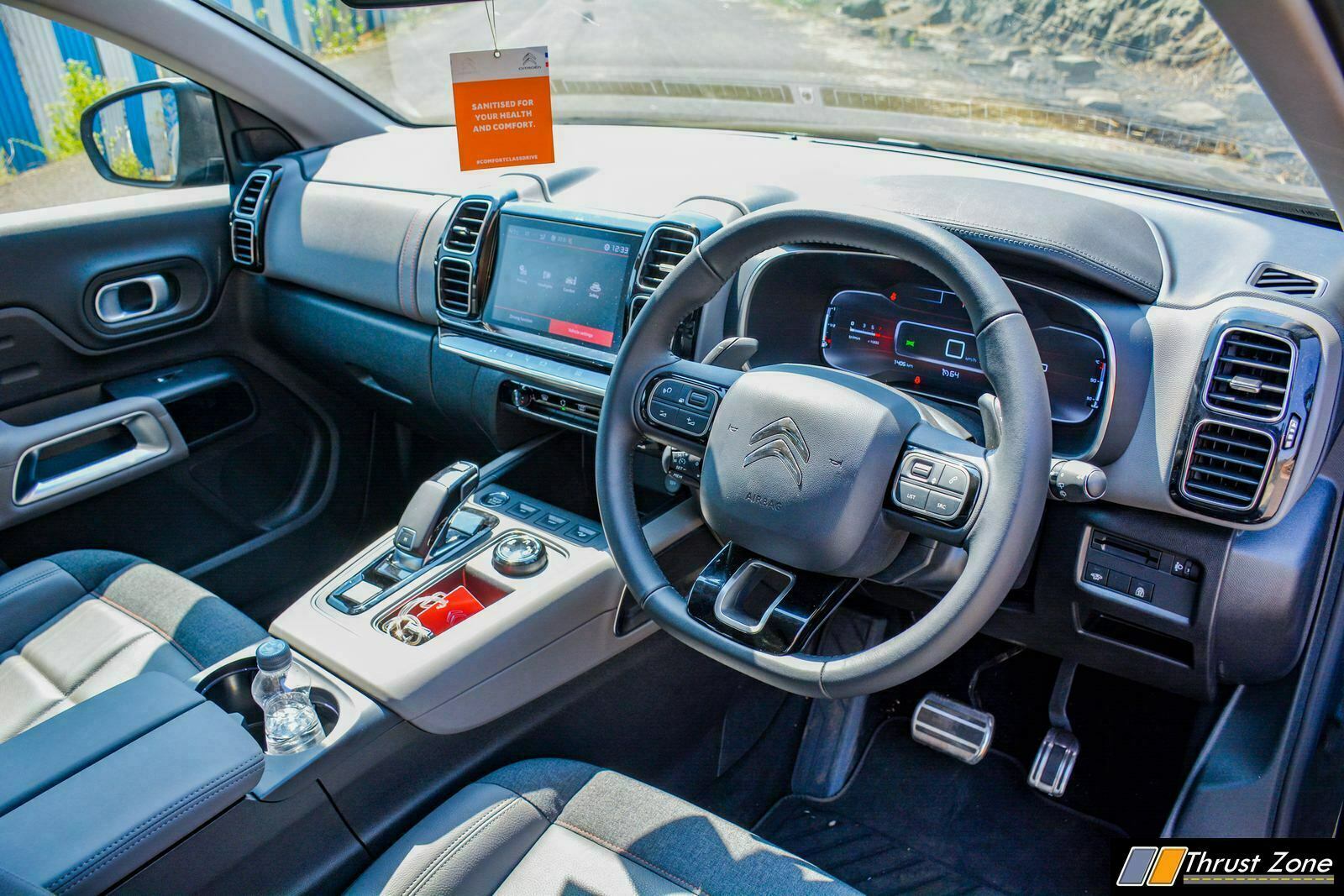 On the safety front, the C5 AirCross will come with six airbags, ABS with EBD, hill start assist, hill descent control, ESC, electric parking brake, blind-spot monitoring, front and rear parking sensors, ISOFIX child seat anchors, and reverse camera. All the safety features are standard on both variants. When it comes to seats and space at the back, all three seats are independently reclinable. Add to that, Citroen claims that the Advanced Comfort Seats for technology is on offer to offer additional comfort. 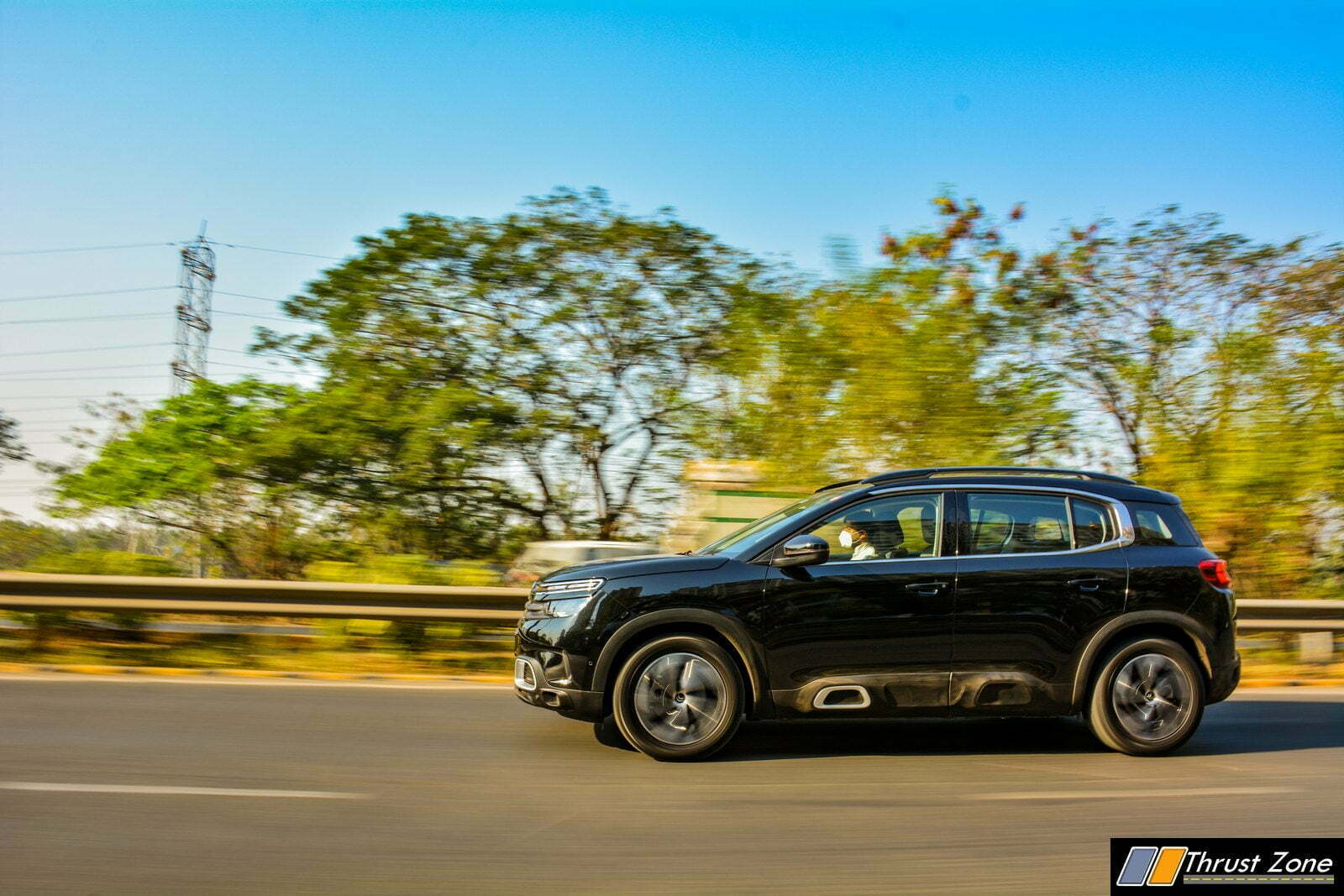 The new Citroen C5 AirCross has a terrific 2.0-litre diesel engine on both variants. The four-cylinder motor makes 177PS at 3750RPM and 400Nm of peak torque at 2000RPM. The motor is paired with an 8-speed automatic transmission as standard. Citroen claims a fuel efficiency of 18.6 kmpl, which is the segment best. The SUV also comes with two drive modes – Eco and Sport, and Grip Control as well, which is a terrain selector with five modes – Standard, Snow, All Terrain (Mud, Damp & Grass), Sand and Traction Control Off. The shifts are seamless, smooth and fast. This is the third-best 2.0-litre diesel engine automatic gearbox in the country right now. 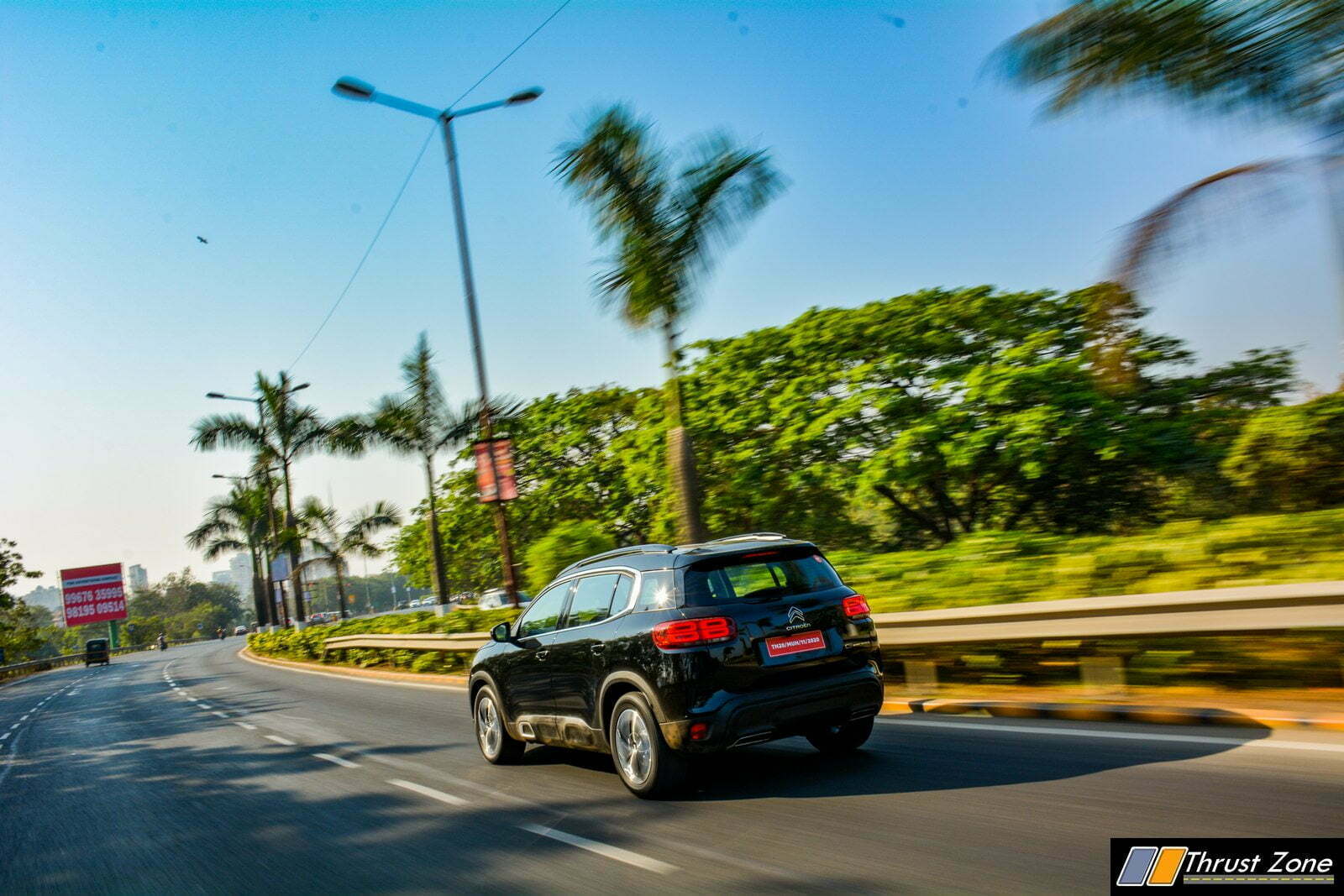 After VW group and FCA engine (with various automatic gearboxes of course). Since both FCA gearbox isn’t great and VW’s does not exist anymore, it makes the Citroen package very impressive and on top of them and puts it in the line of Mercedes and BMW. NVH levels are kept in check from the engine. Road noise is well damped and there is a hush of wind noise. Overall, the silent cabin and top-notch music system make it a fantastic place to spend some time. With ample power in the low and mid-range along with top-end power, the C5 Aircross is a true all-rounder. 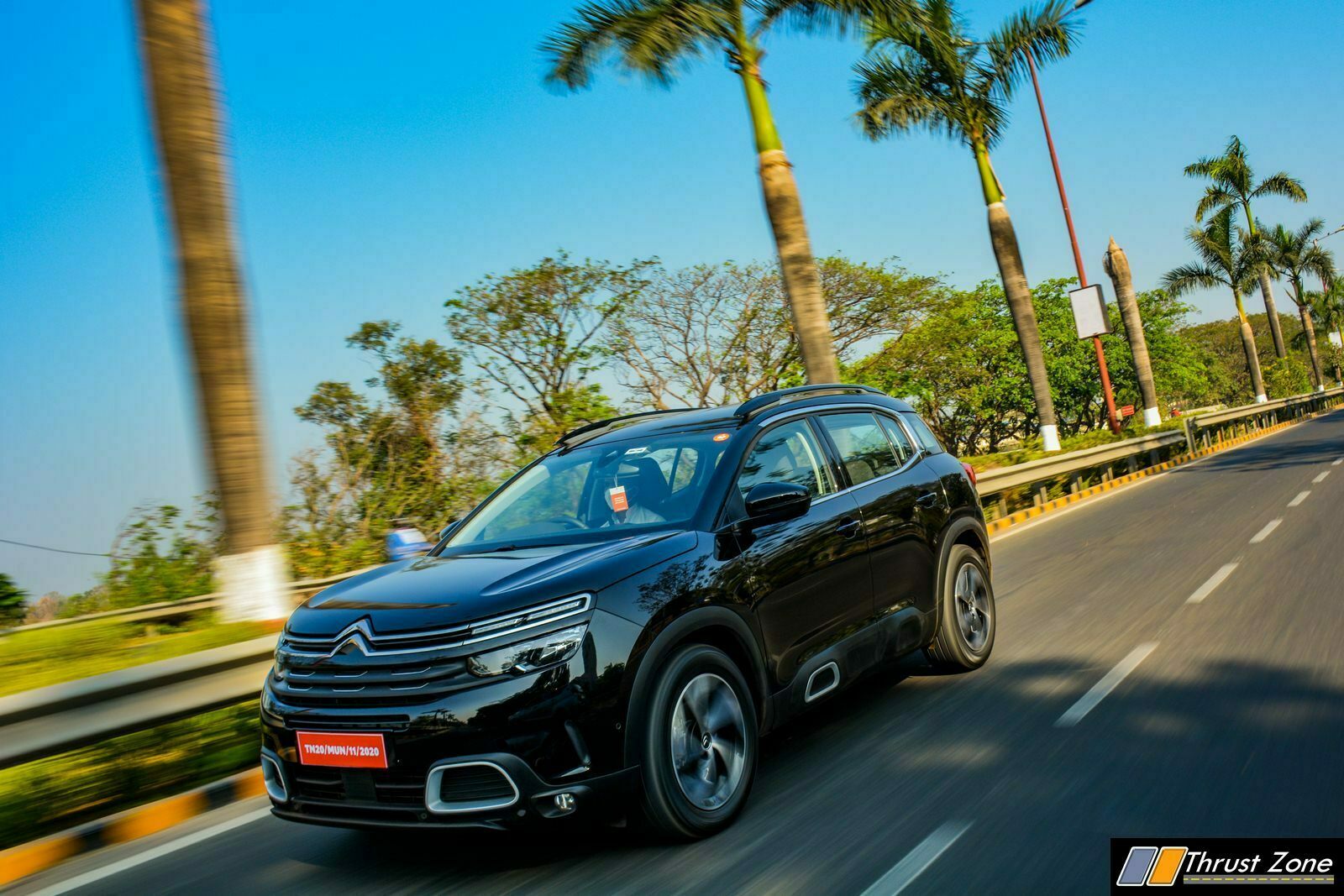 Dynamically, the SUV impresses with bare minimum body roll, good feedback from the steering. The precision and lightness are also spot on. The ‘damped’ nature of the steering and brake pedal makes this SUV feel like you are driving something truly comfortable and luxurious from several segments above. Let’s not forget the special suspension with additional hydraulic stops in it to make sure it feels very comfortable and feel quite sporty at the same time. 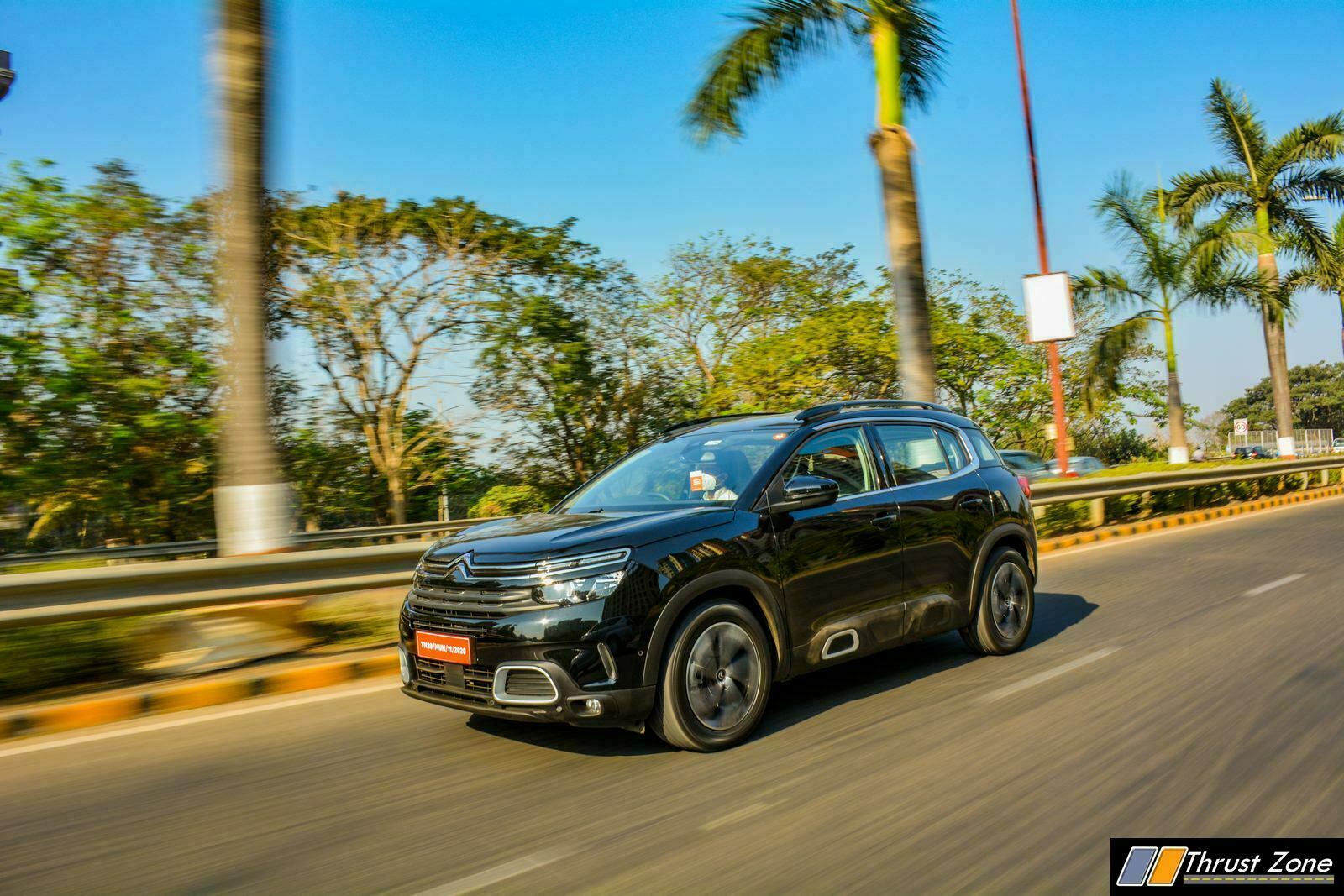 The ride quality isn’t far away from most rivals, but the way the SUV stays ‘unfazed’ no matter what you put it through is what evokes the comfort quotient and hence Citroen branding it the same is totally justified. This isn’t a gimmick from a marketing book like most suggested. The Eco tyres from Michelin which are the Primary 3ST are low on noise and high on grip which ends up offering good braking confidence as well be it high speeds also. 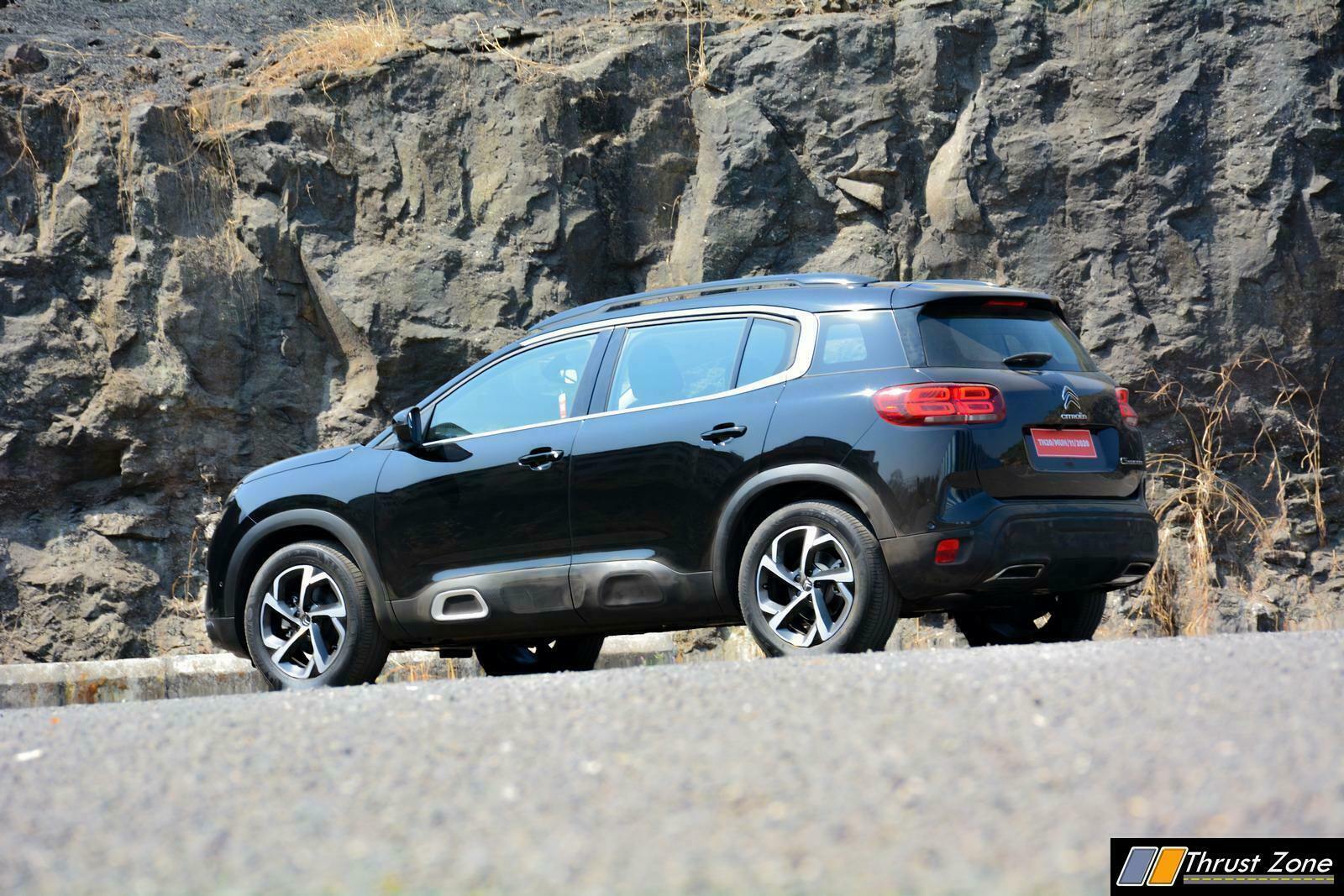 Clearly, our first impression of the C5 Aircross is quite impressive. The manufacturer is all set to price it in the premium space against the likes of the dull rivals such as the Hyundai Tucson and now-defunct Honda CRV. The Volkswagen Tiguan 5-seater is going to be petrol only. The Citroen SUV also goes against the likes of its new cousin the Jeep Compass to a large extent. We were given an idea of pricing, which could start from Rs. 23 lakhs and end till Rs. 25 lakhs ex-showroom, C5 Aircross SUV has everything that it takes to be a top contender in this segment because it is something special and is not considered boring and uninteresting like its rivals. Seems like a game-changer is on its way!