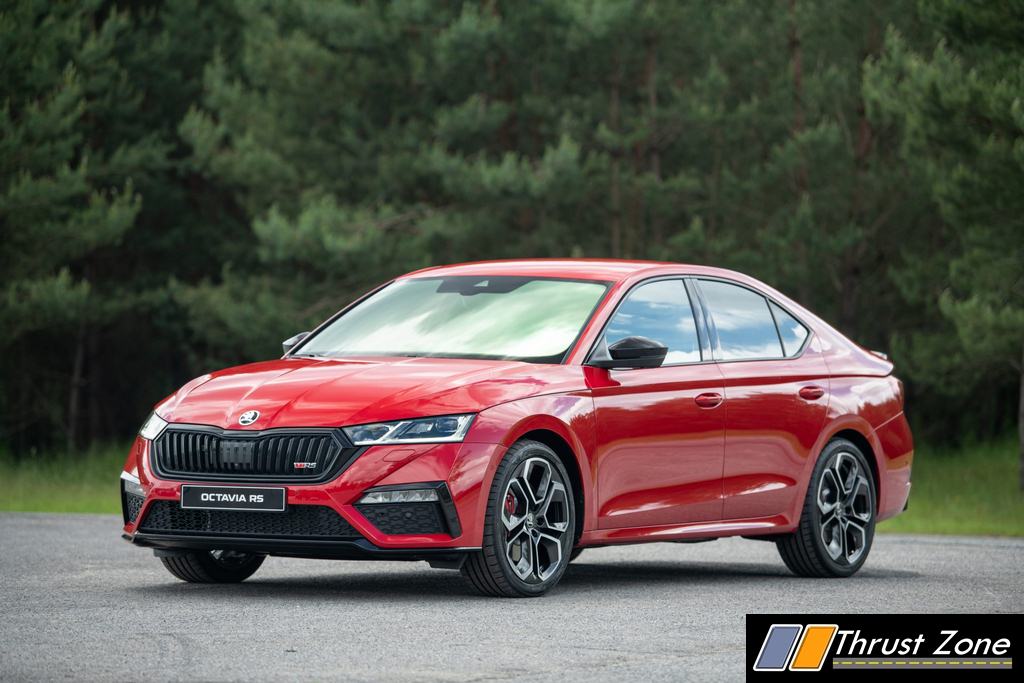 ŠKODA is continuing the tradition of its performance RS models in the fourth-generation OCTAVIA too. This iteration, the 2021 Skoda Octavia RS, however, is the first in which the Czech car manufacturer is offering three different drive systems: in addition to the OCTAVIA RS versions with either a petrol or a diesel engine, the OCTAVIA RS iV – the brand’s first RS plug-in hybrid – was showcased earlier and now launched in Europe.

Both the 2.0 TSI OCTAVIA RS and the OCTAVIA RS iV have an output of 180 kW (245 PS). The 2.0 TDI produces 147 kW (200 PS) and is the only model in the RS range to be available with all-wheel drive on request. All three 2021 Skoda Octavia RS variants feature sporty bodywork detailing including RS-typical black touches. The interior, with its traditional and dynamic design, is also predominantly black. 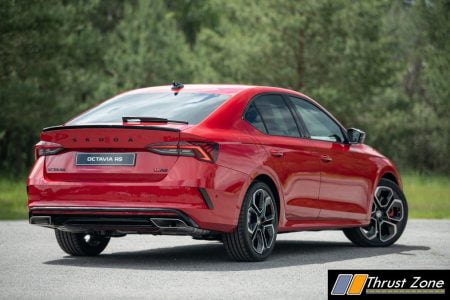 Since the success story of ŠKODA’s RS family began in the year 2000 with the first-generation OCTAVIA, the sportiest versions of a variety of the Czech manufacturer’s production models have borne the distinctive abbreviation ‘RS’. The letters stand for ‘Rally Sport’ and are reminiscent of the ŠKODA 180 RS and 200 RS rally prototypes as well as the success of the ŠKODA 130 RS at the Monte Carlo rally in the 1970s. ŠKODA built more than 17,600 units of the first OCTAVIA RS featuring a 1.8-litre turbo engine and generating 132 kW (180 PS) as a hatchback initially – and, as of 2002, also as an estate. More than 87,800 of the second-generation OCTAVIA RS rolled off the production line. In addition to a 147-kW (200-PS) petrol engine, it was also offered for the first time with a 125-kW (170-PS) diesel.

The third-generation OCTAVIA RS, launched in 2013, was even more successful. It was the first to boast the continuous red reflector strip at the rear, which has been a defining detail of RS models ever since. It was initially available with a 162-kW (220-PS) petrol engine, and later also with 169-kW (230-PS) and 180-kW (245-PS) petrol engines. The 2.0 TDI had an output of 135 kW (184 PS) and offered all wheel drive as an option for the first time in an RS. A total of more than 172,000 vehicles were produced. In Germany, the United Kingdom and Switzerland, RS variants now account for more than 20% of models in the range. 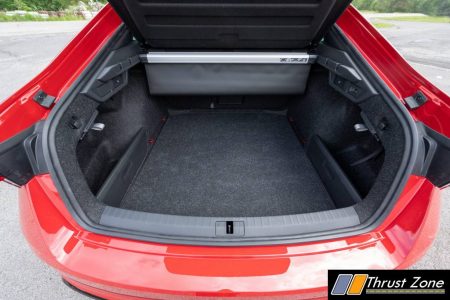 In the fourth generation of the OCTAVIA RS, customers can opt for one of three drive systems for the first time. With a power output of 180 kW (245 PS), the new OCTAVIA RS iV with plug-in hybrid drive and 6-speed DSG as well as the OCTAVIA RS equipped with a 2.0 TSI petrol engine and a manual 6-speed gearbox or 7-speed DSG are each on a par. The 2.0 TDI delivers 147 kW (200 PS); it is always coupled with a 7-speed DSG, and all-wheel drive is an optional extra. The control electronics of the optional all wheel drive react to changing driving conditions within a fraction of a second and support the driving dynamics, for example when cornering fast. Here, the system transfers part of the driving torque to the opposite wheel when the load on the inner wheel is reduced, and maintains traction.

RS models traditionally look much more dynamic than other OCTAVIAs. In addition to exclusive front and rear aprons, they feature numerous black attributes. These include the ŠKODA-typical grille, diffuser, and Air Curtains above the exclusive LED fog lights. The wing mirror housings and the window frames also come in gloss black, as do the COMBI’s roof rails. At the rear of the hatchback, the aero flaps, diffuser and RS rear spoiler are gloss black too. The COMBI’s roof spoiler is body-coloured. RS models feature black 18-inch alloy wheels as standard; the brake callipers boast an eye-catching RS-typical red finish. 19-inch alloys are available as an option. The sporty top-of-the-range versions are characterised by exclusive vRS badges on the ŠKODA grille and tailgate. Standard equipment includes the innovative full LED Matrix headlights, which are making their OCTAVIA debut. 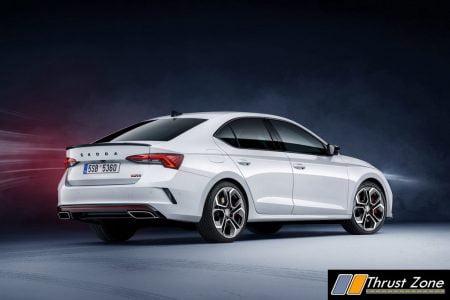 The interior of all 2021 Skoda Octavia RS models is predominantly black. The redesigned multifunction leather sports steering wheel has three spokes and bears the RS logo. It has rearranged buttons and new knurled wheels in a chrome design; vehicles with DSG feature shift paddles. The front sports seats with integrated headrests are upholstered in black fabric, whilst the optional ergonomic seats come with a cover made of Alcantara®, leather and artificial leather as well as seat-depth adjustment and a massage function. The seats bear the RS logo and coloured decorative stitching in red or silver-grey, which can also be found on the leather steering wheel, the armrests and the Alcantara®-covered instrument panel. Carbon-effect decorative strips and pedals in an aluminium design add the finishing touches to the car’s athletic appearance.

The three 2021 Skoda Octavia RS models are fitted with the Virtual Cockpit instrument panel as standard, which offers an additional Sport layout. They come with Driving Mode Select as standard, featuring a new RS mode. All driver assistance systems from the fourth-generation OCTAVIA are of course also available for the RS variants. These include the new Collision Avoidance Assist, Turn Assist and Exit Warning as well as Local Traffic Warning.

In the three nippy range-topping models, dynamic driving characteristics are ensured by the progressive steering system (standard) and RS-typical sports suspension, which is lowered by 15 mm for the 2.0 TSI and the 2.0 TDI. Dynamic Chassis Control is available as an option and constantly adjusts the damping, thus enabling a particularly dynamic driving style in Sport mode. 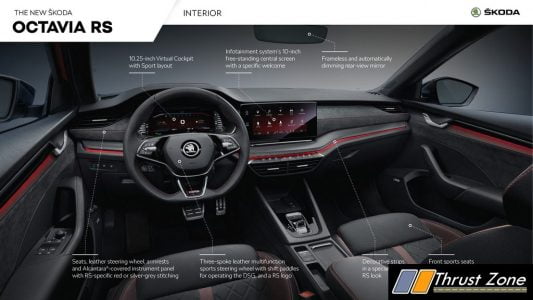 In Driving Mode Select, 2021 Skoda Octavia RS DCC now enables parameters such as suspension, damping and steering characteristics or the operation of the DSG to be adjusted to suit individual preferences. These adjustments are made using sliders via the central touchscreen. The ground clearance of the OCTAVIA RS iV remains unchanged when equipped with DCC. In TSI variants, an electronic VAQ limited-slip differential provides more traction on the front axle. The two most powerful versions feature 17-inch brakes, whilst the diesel is fitted with 16-inch brakes at the front and 15-inch brakes at the rear.

2021 Skoda Octavia RS also offers systems just like the base Octavia. The latest-generation modular infotainment matrix gets comprehensive connectivity thanks to a built-in eSIM, a high level of active and passive safety thanks to new assistance systems, and more. With central displays measuring up to 10 inches, a revised Virtual Cockpit with new layouts and an optional head-up display – making its ŠKODA debut in the new OCTAVIA – the driver always has an optimal overview of all the relevant information. The new active systems, Collision Avoidance Assist, Turn Assist and Exit Warning, also boost safety. 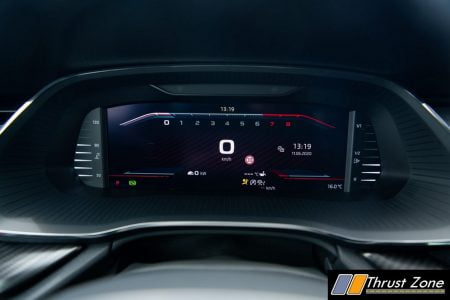 The three infotainment systems for the ŠKODA OCTAVIA come from the latest generation of Volkswagen Group’s modular infotainment matrix and are equipped with an integrated eSIM. This means the ŠKODA OCTAVIA is always online and provides access to ŠKODA Connect mobile online services such as Proactive Service (Breakdown Call). In addition, extensive remote vehicle access, route calculations backed by online data and real-time traffic information can be used via Infotainment Online. Even the entry-level Swing radio has a customisable 8.25-inch touchscreen and offers a DAB receiver. Furthermore, it features wireless SmartLink technology for pairing smartphones as well as Android Auto, Apple CarPlay, MirrorLink™ and infotainment apps such as weather or news. 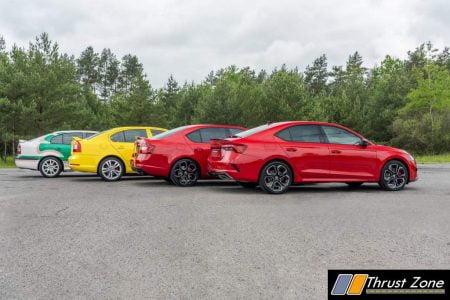 The Bolero infotainment system, which allows the navigation function to be activated later, and the Columbus infotainment system both have a 10-inch central touchscreen. Both systems can be operated using gesture control or verbally using the Laura voice assistant, which understands fluently spoken complete sentences in six languages. The maps are updated online, and Internet radio and streaming services for music and TV are also available. The top-of-the-range Columbus infotainment system can display the navigation system’s maps in a different level of zoom to the Virtual Cockpit. This new function can be adjusted using the innovative touch slider below the display, which also controls the volume. 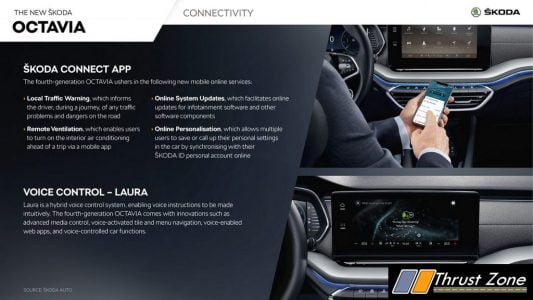 The digital Virtual Cockpit is individually customisable. ŠKODA has increased the size of the screen to 10.25 inches and made it even easier to use. The driver can choose from four different layouts – Basic, Classic, Navigation and Driver Assistance Systems – and specify their desired information using the controls on the multifunction steering wheel. In the Driver Assistance Systems layout, activated systems are shown in 3D and are mirrored in the central display. For the first time at ŠKODA, the Virtual Cockpit can be enhanced with the new head-up display on request. An electronic unit generates an image from data, such as speed, navigation instructions, recognised traffic signs or activated driver assistance systems, and projects it onto the windscreen in clear view of the driver. This allows the driver to read information without taking their eyes off the road.

The fourth-generation OCTAVIA family includes assistance systems that are being used for the first time at ŠKODA. Collision Avoidance Assist supports controlled avoidance by actively amplifying the steering moment. This helps to prevent an imminent collision with a pedestrian, cyclist or other vehicle. At junctions, Turn Assist can detect oncoming traffic at an early stage when turning left, warn the driver, or automatically stop the car. Exit Warning lets the occupants know if another vehicle or a cyclist is approaching from behind when opening the car door. Local Traffic Warning is also new: this automatically warns of traffic incidents in the immediate vicinity of the vehicle, such as the end of a traffic jam. 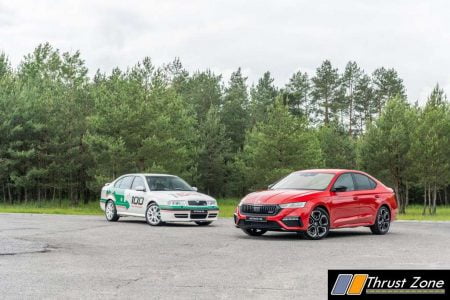 Other assistance systems are also making their debut in an OCTAVIA or have been further enhanced. These include Area View, which uses a 360-degree image generated by four cameras to show the car’s immediate surroundings when parking or manoeuvring, and Side Assist that detects vehicles approaching from behind or in the blind spot up to 70 m away. In the city, Front Assist with Predictive Pedestrian and Cyclist Protection warns of potential collisions visually, acoustically and by gently applying the brakes, and initiates an emergency stop if necessary. 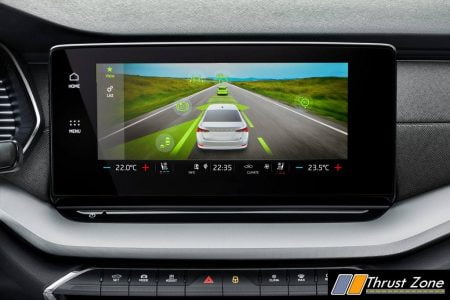 Predictive Cruise Control also uses images from the camera on the windscreen and data from the navigation system to automatically adjust the speed to suit the road ahead. Together with the improved Traffic Sign Recognition, Adaptive Lane Assist, which also detects roadworks, Traffic Jam Assist and Emergency Assist, it forms the comprehensive Travel Assist. Using Hands‑on Detect, this system also checks whether the driver is touching the steering wheel every 15 seconds or whether they may no longer have control of the vehicle due to a potential medical emergency. In this case, Emergency Assist activates the hazard lights and brings the car to a stop in its lane.

Baby Royal Enfield 250 Could Be Incoming! Are You Ready For It?

Drive And Tell: Five Reasons To Buy Honda Jazz Over Any Other Hatch