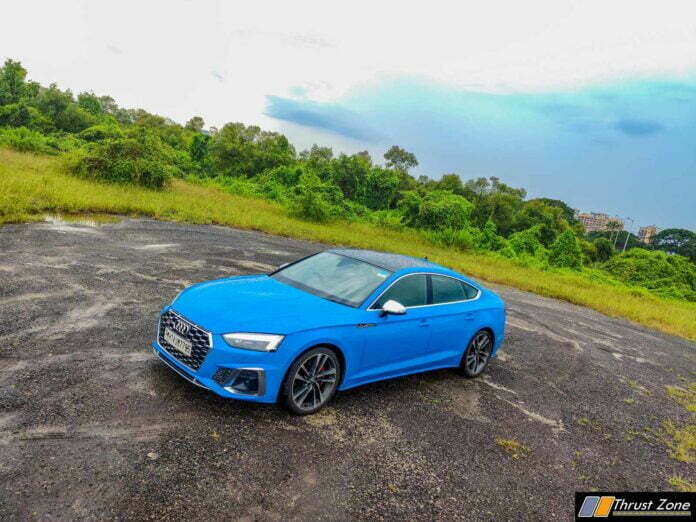 Audi India is known for creating some segments that they have set up the Indian luxury car market. The Audi Q7, Q3 and A6 were segment-defining cars once upon a time. Audi did that with performance models too and called in the RS series of cars and made a segment in which competitors followed them. One such segment that was not so in the past is the launch of the Audi S5. Part of the ‘brat pack’ where the Audi A5 and A5 cabriolet were launched. The S5 took the highlight because it was a proper entry-level performance car from the brand that seemed very practical and approachable. Updated for 2022, how good is it? We find out! 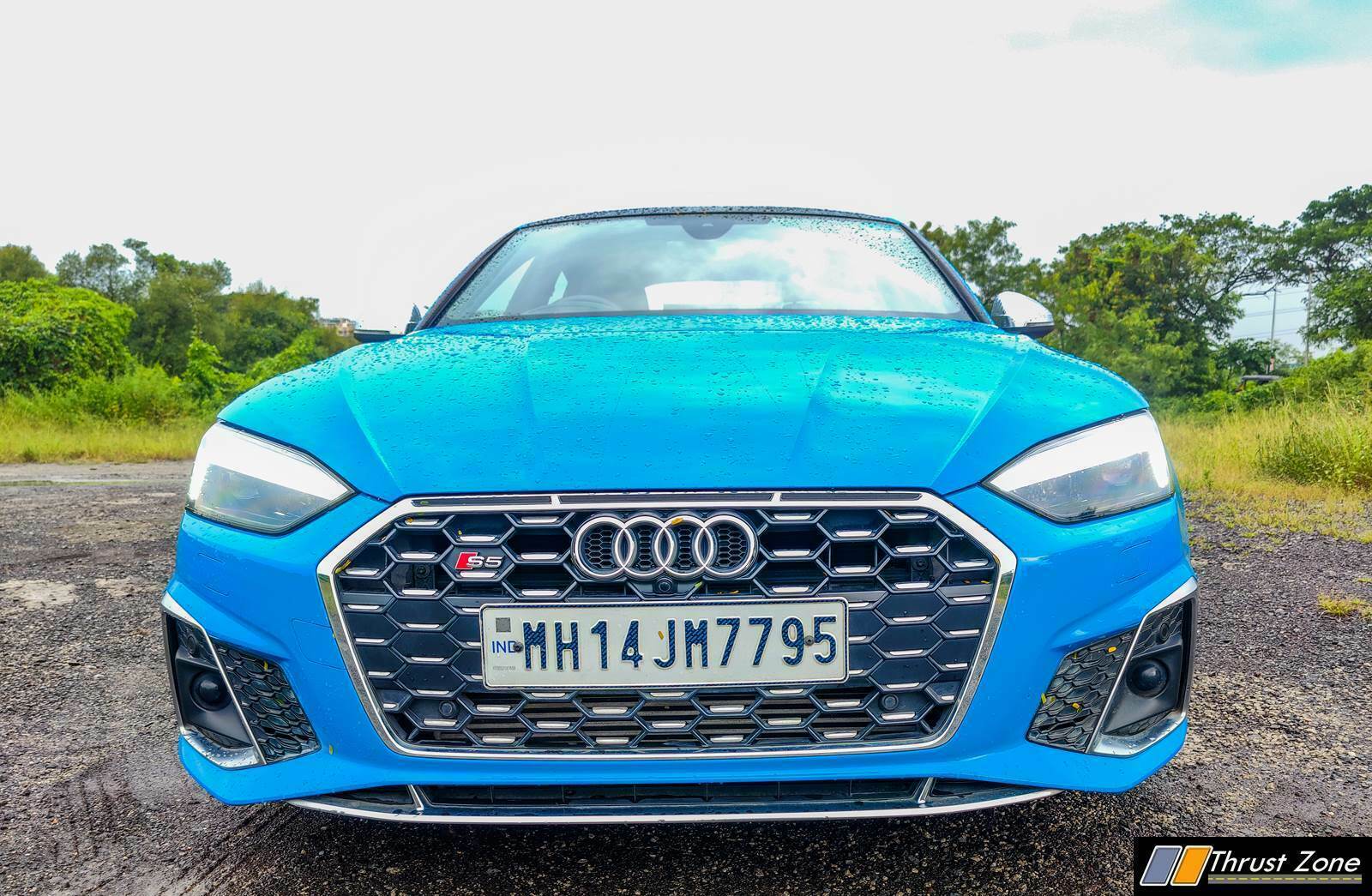 On the outside, the large chrome grille grabs attention, sculpted bumpers make it look sporty, flashy and yet subtle. Only Audi can pull off all this together. The LED DRL at the front and very fancy-looking LED tail-lamps make it look futuristic. This makes the car look like a typical Audi fast saloon. The side profile is of a proper European notchback as it looks clean, stylish, and subtle at the same time. A very strong resemblance to the RS7 makes it an instant hit in the enthusiast community. The build quality on the outside seems and sounds great and it scores high on the crash test as well. The elements on the car, such as the front end, LED lights, a large wheelbase, and multi-spoke wheels make it look much better than its rival easily. 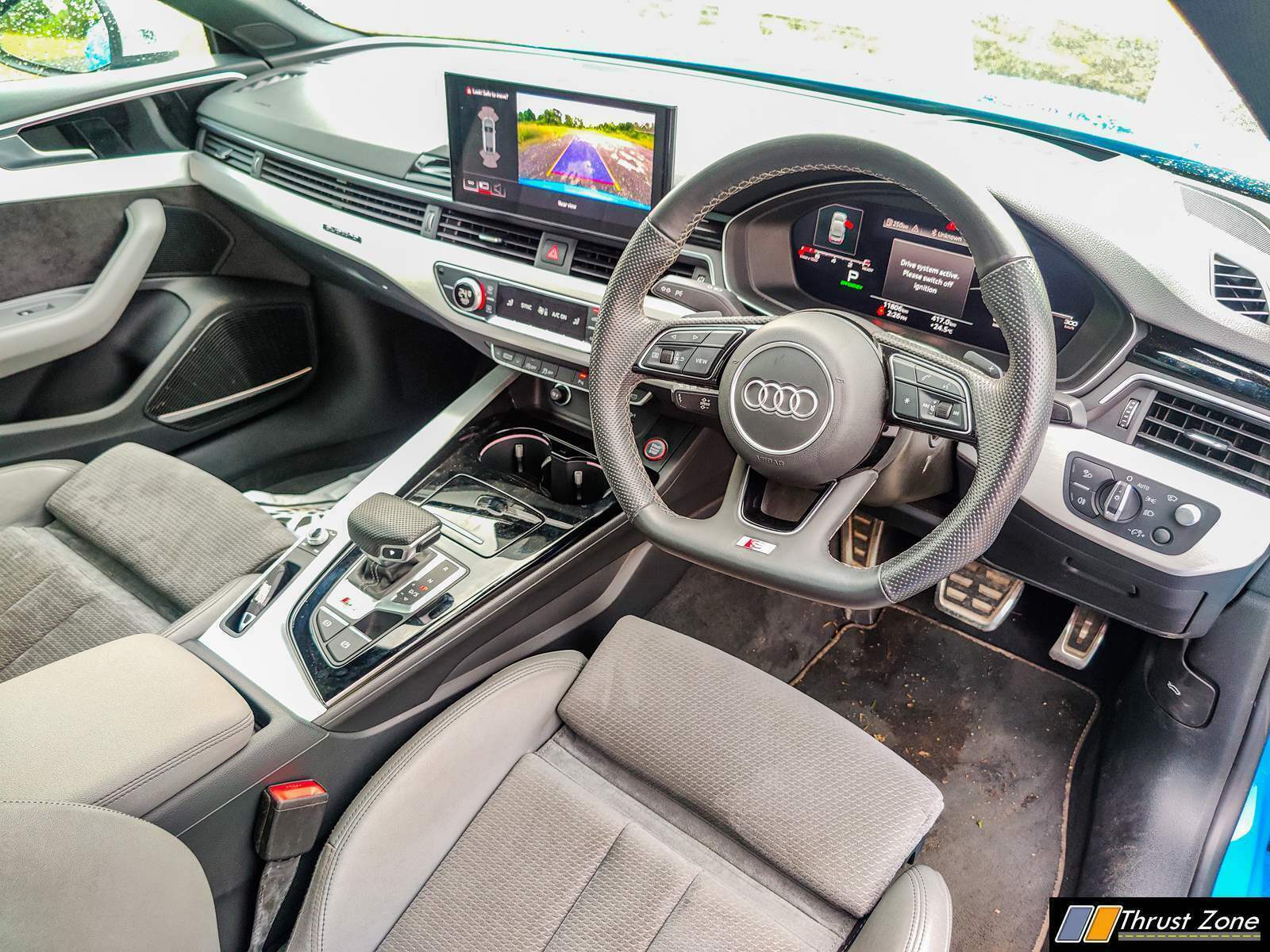 On the inside, the build and quality are good and so is the expansive feature list we have explained time and again in our launch report. You get every feature possible in the saloon. Right from automatic lights and wipers to reversing cameras, single ambient light, projector lamps and more. The car gets a large panoramic sunroof, power seats, front parking sensors, and a digital virtual cockpit. The S5 gets Wireless Apple Car Play and Android Auto, a fantastic sound system by Bang and Olufsen is on offer makes the experience top-class. The main screen is slick, quick, and works quite well thanks to the haptic feedback.

Audi Connect system includes a host of GPS-related features such as GEO and time fencing and much more. Space is more than most of its rivals with adequate shoulder room, but the knee room you expect is here in a very good margin. Leg and headroom continue to be in good supply but as always it is more of a four-seater than a five-seater. The boot space is good enough at 550 litres and so is the overall practicality of the interior. Road and wind noise inside the cabin is also well-controlled thanks to good insulation all around. Like any other Audi, it is still a pleasant place to be. Safety kit continues to be high with the inclusion of active safety features such as electronic stability control and six airbags on the top-end variant, Hill Hold Assist, ABS and EBD, and more come as standard. The passive safety feature list is bigger but it continues to lack ADAS like any other Audi. 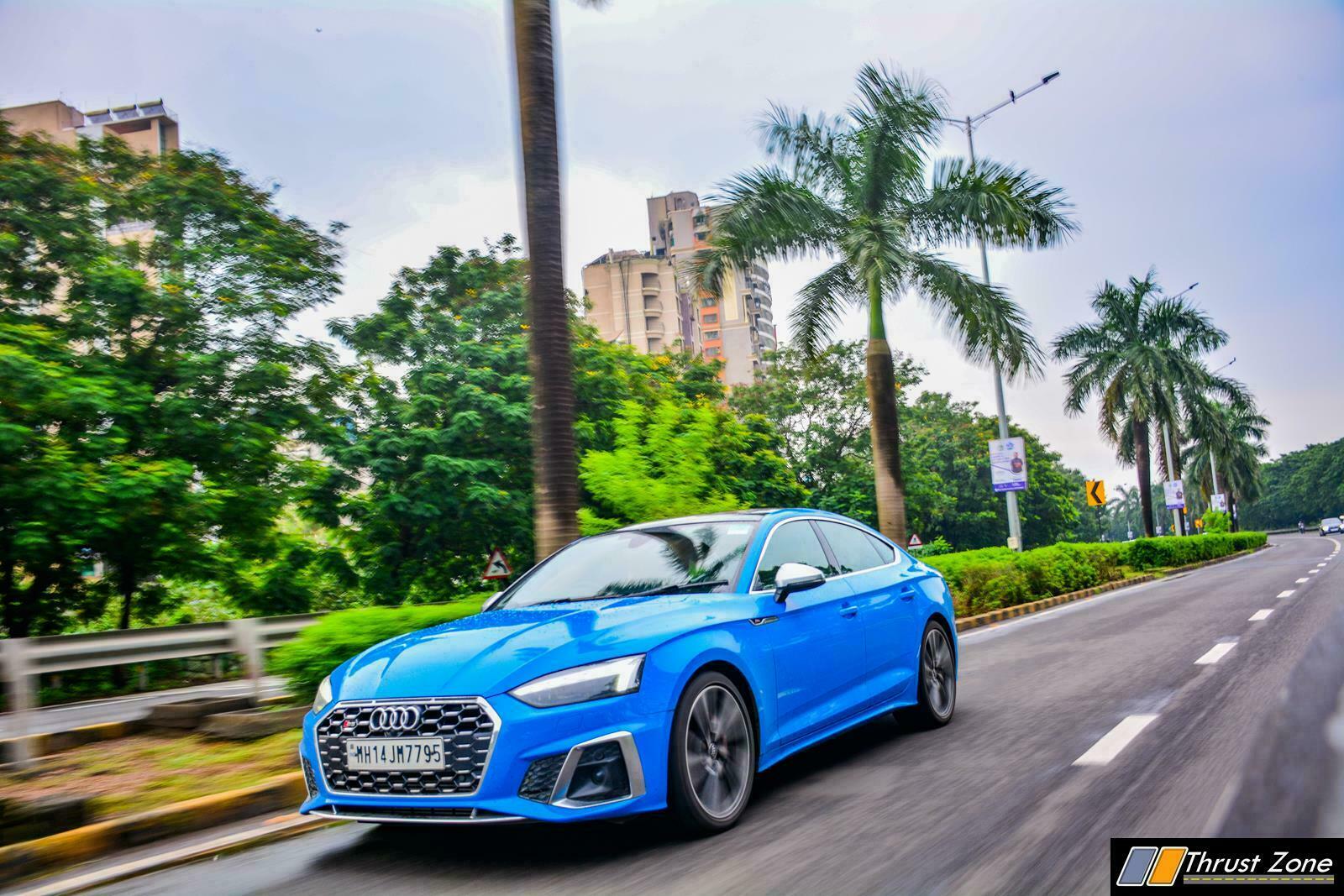 Audi TFSi engines are smooth, free-revving, and low on NVH and the one on the Audi S5 is no different. Be it in any part of the rev range. Low and mid-range are good on the 3.0 turbocharged petrol motor that makes 380 PS and 500 Nm of torque going through the fantastic, smooth, seamless, and quick-shifting 8-speed torque convertor automatic. The engine is linear flexible and powerful at the same time. The engine delivers spectacular fuel economy of 10-11 km/l in the highway run. Dealing with traffic in cities and a slightly spirited highway run, it can still deliver 8 km/l. 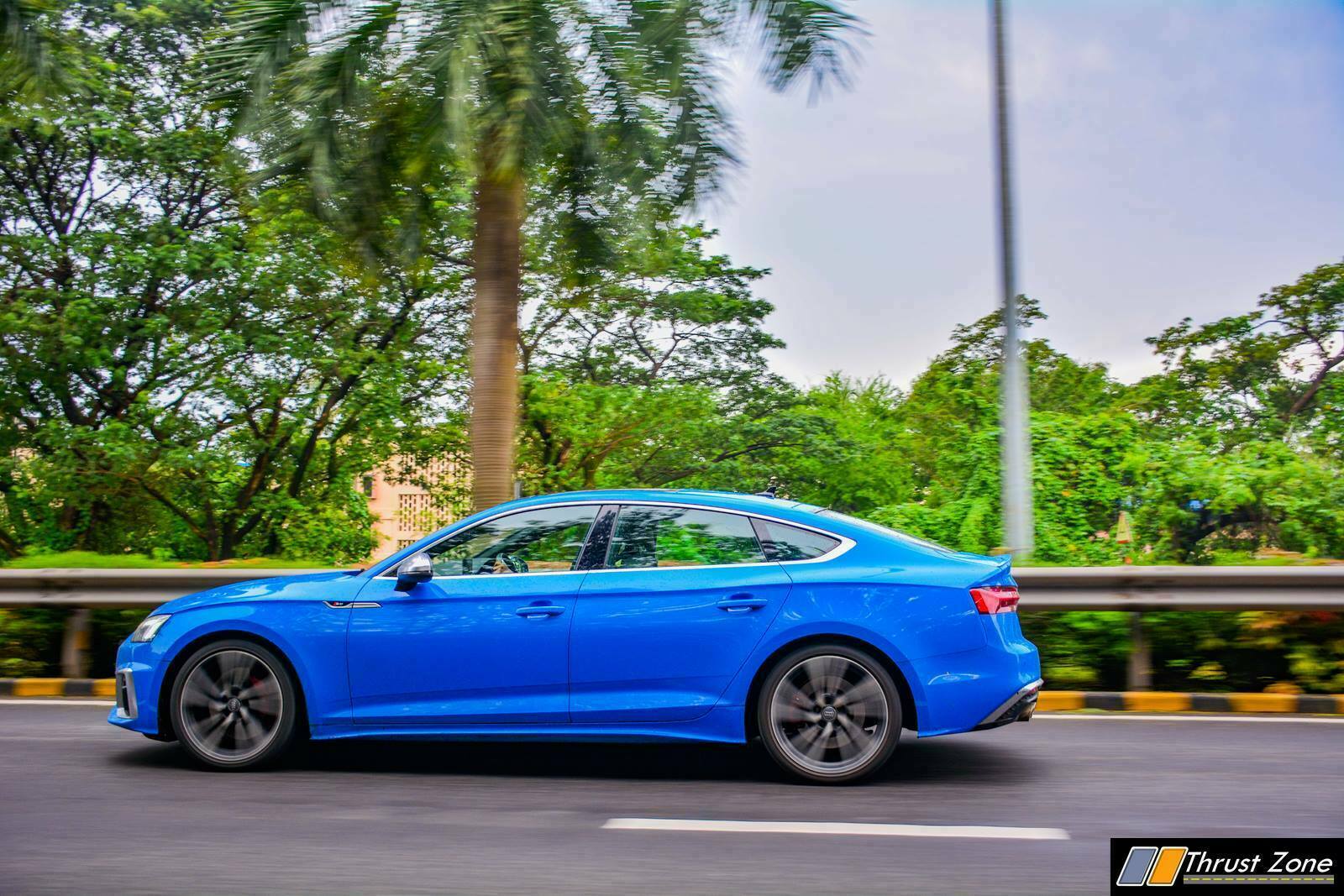 All this while doing 0-100 km/hr in under 5 seconds. All thanks to 8 speeds and cylinder deactivation. The serious and spontatnetous quick acceleration and speed blows you away. It can feel raw and unrefined at the very limit but most of the time it is a spectacular all-rounder. It can be the car that can do highway runs to other cities and with four people sitting in comfort. 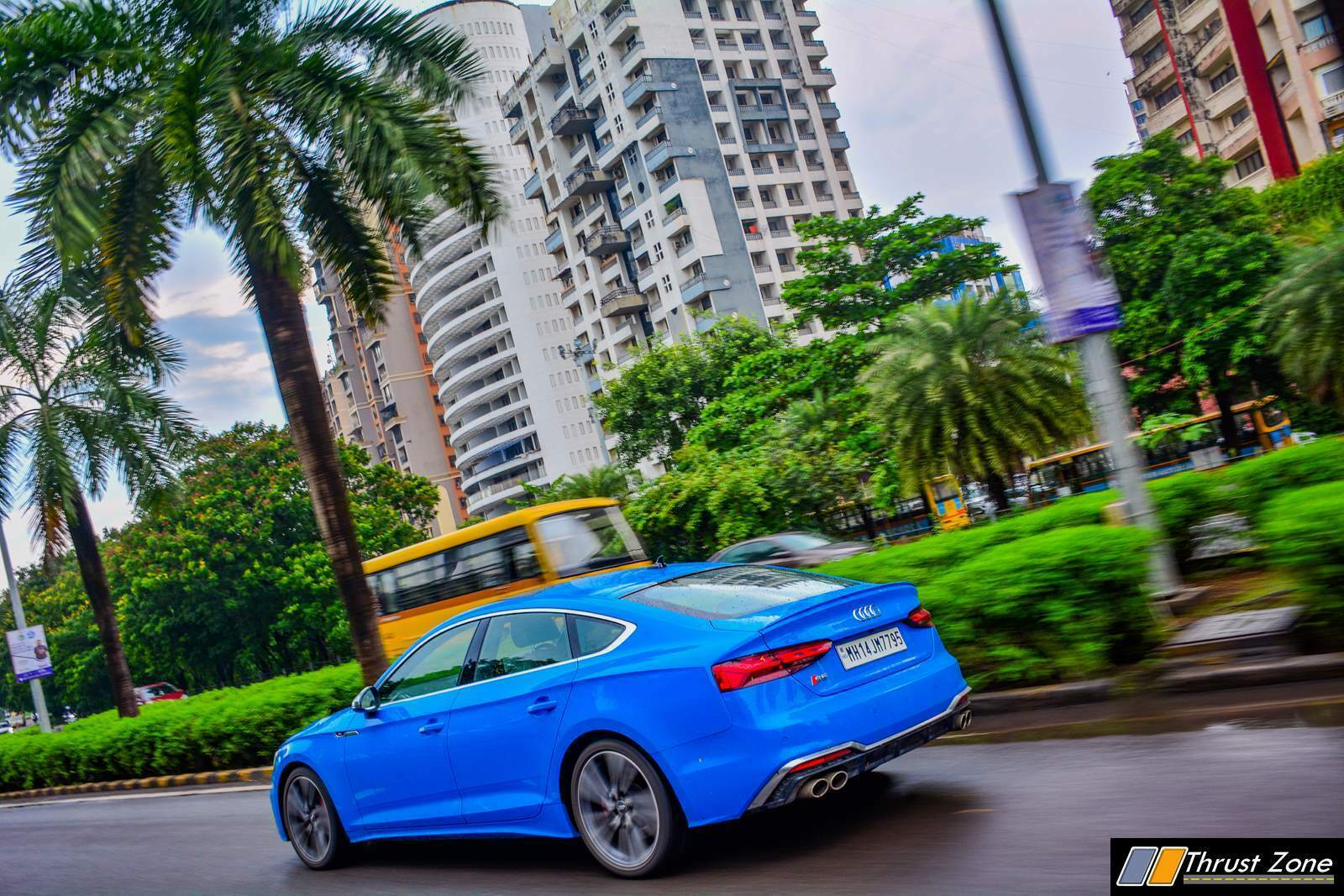 The ride quality is more reassuring at all speeds than we expected. The agility and nimbleness on offer make the S5 practical yet again! The steering gives little feedback and is very precise at all speeds. It weighs up well on the highway too. High-speed stability is spot on thanks to the ideal balance of underlying stiffness and compliance. The brakes were good too with great pedal bite and a lot of performance on offer. Body roll exists while changing lanes at high speeds but it is still a very confidence-inspiring car to drive at any given speed. Overall, a very easy-to-drive sedan and the same time a very good thriller of a machine! 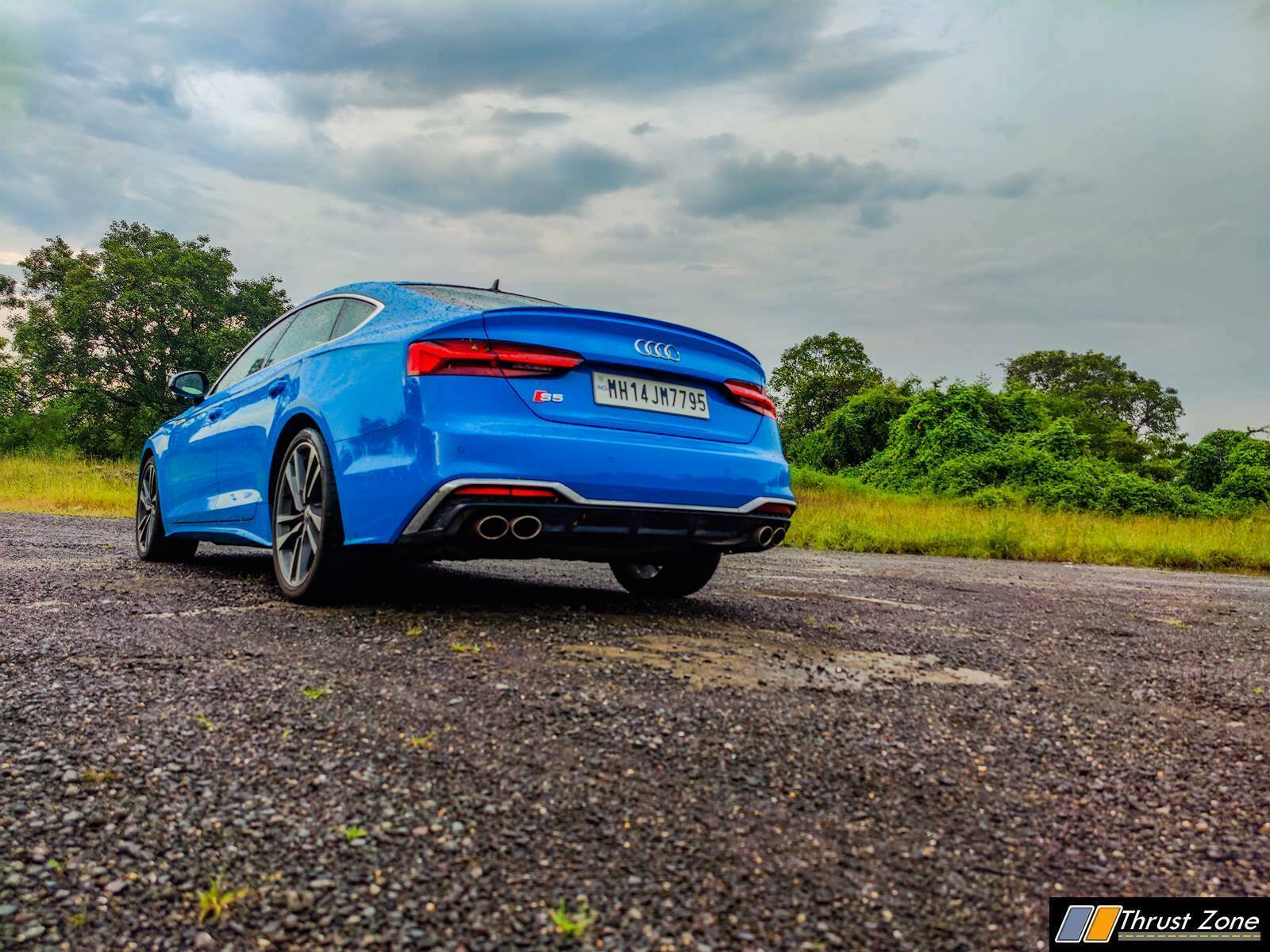 The Audi S5 seems to tick the box despite time going by. The pricing-to-performance ratio, the traditional hits, and the strengths of the Audi brand are seen in the S5. The lovely design inside-out is one of them. The car does lack a bit of feature at this price over its rival and the cabin could feel more special over the previous version but then again it doesn’t truly take away from the fact that it is still a very special car to be in, driven in too, surprisingly. When driven, it puts a smile on the face with the spontaneous launch, and traditional sonorous Audi soundtrack, and did we say the blue test car we had is the perfect icing on the cake?