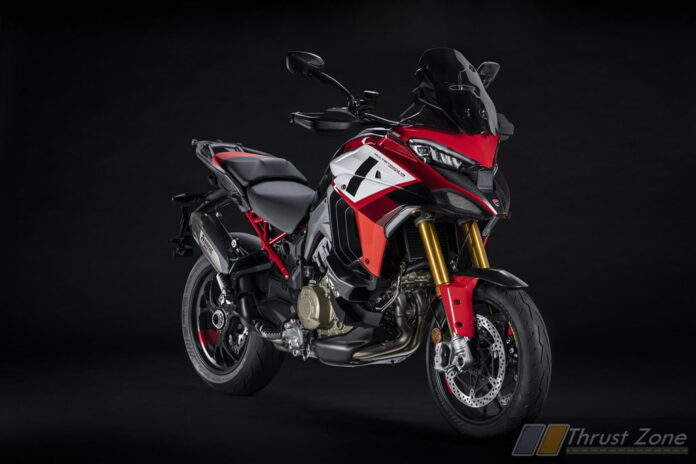 Ducati today announced the launch of the Multistrada V4 Pikes Peak in India, the model that represents the essence of sportiness in the Ducati Multistrada family since its debut in the range. A gem in the sports segment, the new Multistrada V4 Pikes Peak is not only the sportiest Multistrada ever, but also the most powerful model in the entire crossover segment. Priced at INR 31,48,000 (Ex-Showroom India), bookings are now open across all Ducati dealerships in New Delhi, Mumbai, Pune, Bengaluru, Chennai, Hyderabad, Kochi, and Kolkata, with deliveries starting in November.

The Multistrada V4 Pikes Peak comes with a wide range of components made of carbon fibre. In addition, it gets the Akrapovič titanium and carbon exhaust, Low smoked plexi screen, Öhlins front forks with anodized gold legs, two-tone Black and Red rear seat embellished with the V4 logo, and the Ducati Corse badge applied to the ‘beak’.

The braking system of the new V4 Pikes Peak is at the top of the segment and derives directly from that of the Panigale V4. At the front, the system includes 330 mm diameter discs and Brembo Stylema monobloc calipers, like the Multistrada V4 S, to which are added the pads of the Panigale V4. At the rear, the system features a single 265 mm diameter disc with a Brembo floating caliper. 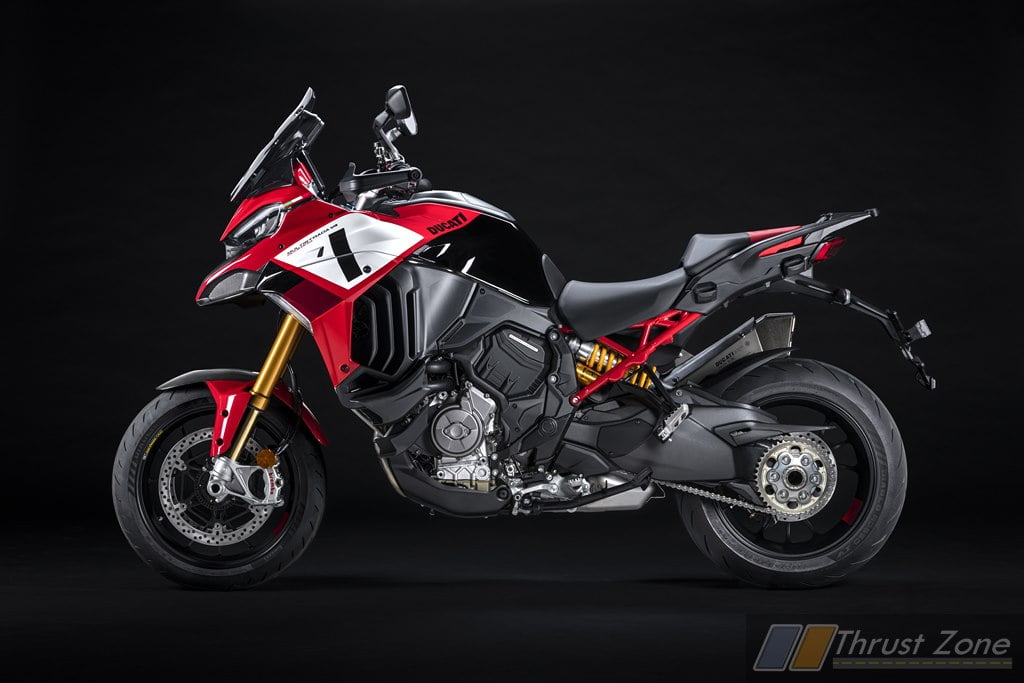 The new Multistrada V4 Pikes Peak stands out even for its dedicated ergonomics, specifically designed to ensure maximum control and optimize lean angles. The riding position has been completely refreshed: the foot pegs, for example, are higher and moved back to increase the maximum lean angle, while the handlebar is lower, narrower and has contained curved bars. The result is that the rider benefits with an even better feeling while riding in sporty conditions while maintaining an excellent level of comfort.

The Multistrada V4 Pikes Peak inherits the latest generation and sophisticated electronic package of the Multistrada V4 S, which includes, among others, the as-standard radar technology both at the front and at the rear, which offers Adaptive Cruise Control (ACC) and Blind Spot Detection (BSD) functionality. The 6.5” TFT dashboard, also available as standard on the Multistrada V4 Pikes Peak, allows the user to view the map navigator, thanks to the advanced Ducati Connect system, which allows to mirror the rider’s smartphone.

In addition to the introduction of the Race Riding Mode, Ducati Wheelie Control on the Multistrada V4 Pikes Peak has an updated strategy that offers an even better response and a more accurate control during dynamic riding. ABS Cornering has also been configured to be safe and performs in peak conditions in all riding situations.

The racing mood of the bike is intensified by the dedicated “Pikes Peak” livery, faithfully inspired both in colours and graphics by that of the Desmosedici GP ’21; even the number plates on both sides of the fuel tank contribute to highlight the deep link with the world of competition. The new livery emphasises the lines of the Multistrada V4 Pikes Peak, by communicating pure sportiness and the unparalleled mix of comfort and performance, protection, and riding pleasure at the same time.

The new Multistrada V4 Pikes Peak comes with a wide range of components made of carbon fibre in addition to the full-titanium Akrapovič exhaust. Other distinctive aesthetic elements are the low smoked plexi, Öhlins front fork anodised gold legs, two-tone black and red rear saddle embellished with the V4 logo, and the Ducati Corse badge applied to the ‘beak’.

The new Ducati Multistrada V4 Pikes Peak adopts the most powerful engine within its category, the admired V4 Granturismo, an extremely lightweight – 66.7 kg only, (1.2 kg less than the twin-cylinder of the Pikes Peak 1260) and compact beating heart. With a displacement of 1158 cc, the V4 Granturismo engine ensures top-of-the segment power and torque levels. The Euro 5-compliant engine delivers 170 Hp with a maximum torque of 125 Nm at 8,750 rpm.

The spring-drive valve train, designed and tested over 200,000 km, ensures outstanding performance, not to mention an absolute level of reliability and, above all, record-breaking maintenance intervals for the category, with valve play checks scheduled every 60,000 km.

Among its distinctive features, the engine adopts the deactivation of the rear bank: by “turning off” the combustion in the rear cylinder, rider and passenger can control the thermal comfort in critical area on the hottest days. 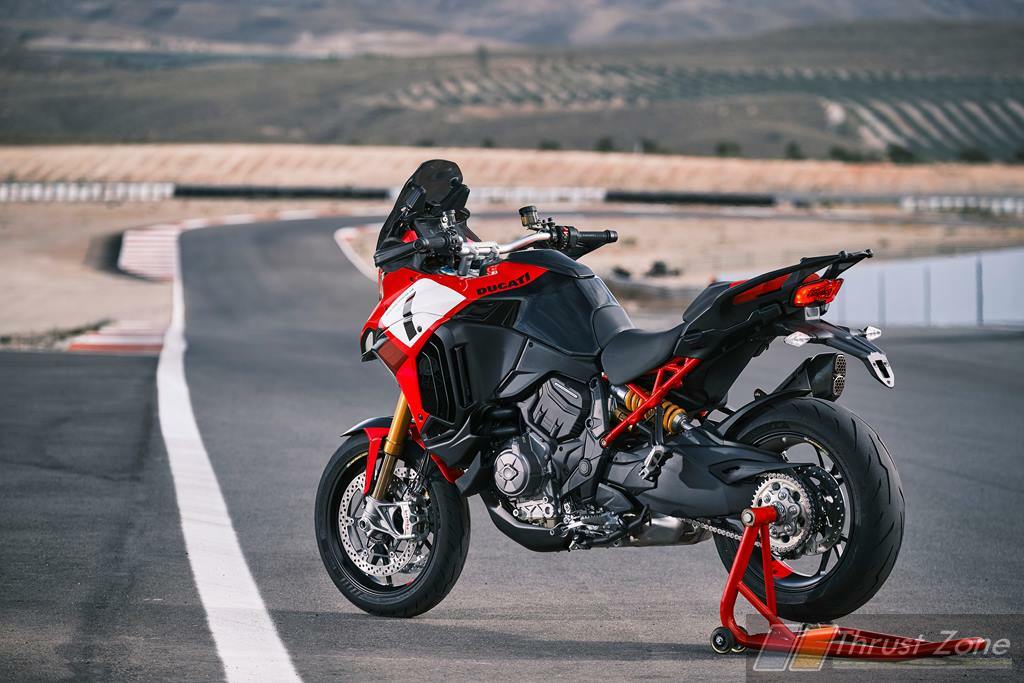 With respect to the Multistrada V4, the riding position has been completely refreshed: the foot pegs, for example, are higher and moved back to increase the maximum lean angle, while the handlebar is lower, narrower and has contained curved bars. The result? A sporty riding position while maintaining an excellent level of comfort. In line with the Pikes Peak’s tradition, the new Multistrada also adopts a lowered plexi screen that enhances its sportiness without sacrificing the protection of the rider and passenger.

First and foremost, the adoption of a pair of 17” Marchesini wheels, a crucial choice not only for the diameter but also because the rims are made by forged aluminium. This means, a considerable weight saving on the unsprung masses. Much of the 4 kg saved by the V4 Pikes Peak compared to the Multistrada V4 S are precisely in the rims (-2,7 kg), an aspect that undoubtedly influences dynamic behaviour of the bike. Equipped with the new Pirelli Diablo Rosso IV (120/70-17 front 190/55-17 rear) tyres, it confirms its pure performance-oriented character.

A distinctive element of the chassis from an aesthetic and functional point of view, that says a lot about the “returns to the origins” of this Multistrada, is represented by the new rear single-sided swingarm. The V4 Pikes Peak is the first Multistrada ever to be equipped with electronic Öhlins suspension. The Smart EC 2.0 system is the same adopted by both Panigale V4 S and Streetfighter V4 S. Unlike the Ducati Skyhook Suspension system adopted by the Multistrada V4, which adapts according to the tarmac’s unevenness to ensures optimal balance, the “event based” system adjusts the suspension according to the rider’s riding style. In other words, the more the rider pushes to the limit, the stiffer the suspension gets.

Öhlins suspension guarantees 170 mm wheels travel, a specific feature which ensures that the V4 Pikes Peak is a true Multistrada. On one hand, it combines comfort and the capacity to absorb the imperfection of the road and on the other, it imbibes the sportiness that every Pikes Peak must have.

The braking system of the new V4 Pikes Peak is at the top of the segment and is derived directly from the Panigale V4. At the front, the system includes 330 mm diameter discs and Brembo Stylema monobloc callipers, like the Multistrada V4 S, to which are added the pads of the Panigale V4 with the aim of ensuring the decelerations of a racing bike. At the rear, the system features a single 265 mm diameter disc with a Brembo floating calliper.

In 2010, the Ducati Multistrada was the world’s first motorcycle equipped with Riding Modes: a technology that allows the rider to change the character of the bike at the touch of a button. Since then, all Multistrada models have had the same 4 Riding Modes, namely Sport, Touring, Urban and Enduro. With the V4 Pikes Peak, Ducati introduces, as a first on a Multistrada model, a specifically Riding Mode developed for sportier riding, the Race Riding Mode, which in this version replaces the Enduro option.

The Multistrada V4 Pikes Peak is also equipped with a 6.5” TFT dashboard, which can be set to 6 different languages and is greatly admired for its optimal resolution and perfect visibility in any light conditions. 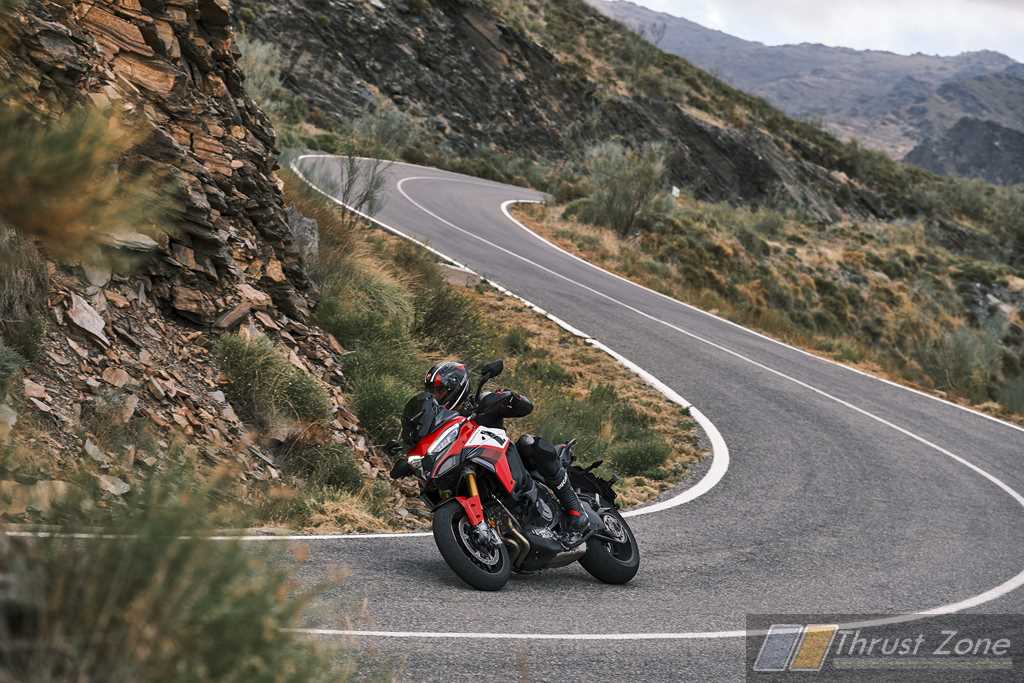 The Ducati Connect system allows the phone’s “mirroring” function to quickly check the phone book, answer incoming calls, and listen to some music. The Sygic GPS navigation app gives the opportunity to view the navigator map, “projected” directly on the display together with all the information that helps the rider through the set itinerary. In terms of safety equipment, the V4 Pikes Peak comes with Riding Modes, Power Modes, ABS Cornering, Ducati Traction Control, Ducati Wheelie Control, DRLs, Ducati Cornering Light, Vehicle Hold Control, Adaptive Cruise Control, and Blind Spot Detection. The complete press kit along with all the product information and the images of the new Multistrada V4 Pikes Peak is available for download on Ducati Media House.

Priced at INR 31,48,000, the Multistrada V4 Pikes Peak is available in a Dedicated “Pikes Peak” livery with black wheels and bookings are now open across all Ducati dealerships in Delhi–NCR, Mumbai, Pune, Hyderabad, Bengaluru, Kochi, Kolkata & Chennai, and deliveries will begin in November. All prices are Ex-Showroom India.