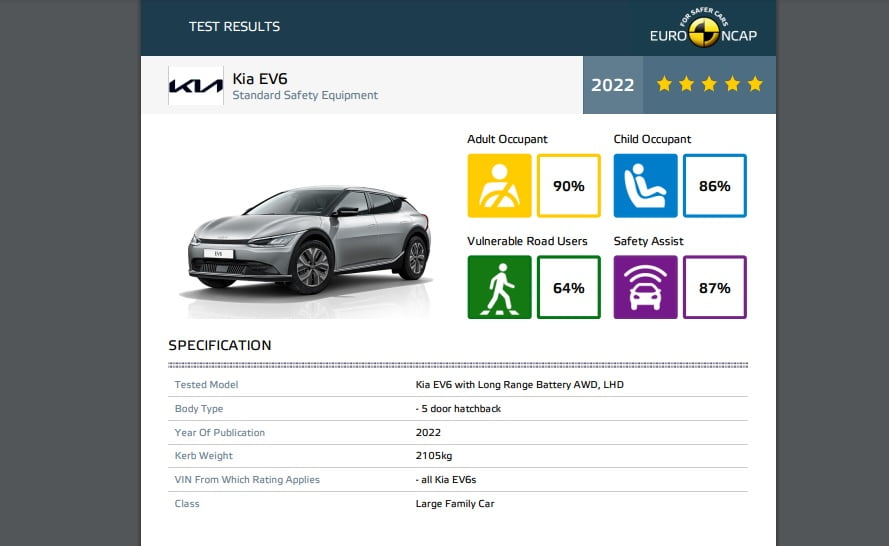 The Kia EV6 was crash tested by Euro NCAP. The electric crossover received a full 5-stars. But how and what are the details? We find out!

The passenger compartment of the EV6 remained stable in the frontal offset test. Dummy readings showed good protection of the knees and femurs of the driver and passenger. Kia showed that a similar level of protection would be provided to occupants of different sizes and to those sitting in different positions. Protection of the driver’s chest was rated as marginal, based on dummy readings of chest deflection and the lower leg was also rated as marginal. Analysis of the deceleration of the impact trolley during the test, and analysis of the deformable barrier after the test, revealed that the EV6 would be a benign impact partner in a frontal collision. With the exception of the chest of the rear passenger, protection of which was adequate, all critical body areas of both the driver and rear seat passenger were well protected. In both the side barrier test and the more severe pole impact, protection of all critical body areas was good and the car scored maximum points.

Control of excursion (the extent to which a body is thrown to the other side of the vehicle when it is hit from the far side) was found to be marginal. The EV6 has a counter-measure to mitigate against occupant to occupant injuries in such impacts and this performed well in Euro NCAP’s test. Tests on the front seats and head restraints demonstrated good protection against whiplash injuries in the event of a rear-end collision. A geometric analysis of the rear seats indicated marginal whiplash protection. The EV6 has an advanced eCall system which alerts the emergency services in the event of a crash. The car also has a system which applies the brakes after an impact, to avoid secondary collisions.

The protection offered by the bonnet to the head of a struck pedestrian was predominantly adequate or marginal. The bumper provided good protection to pedestrians’ legs at all test points but the protection provided to the pelvis by the front edge of the bonnet was mixed. The EV6 has an autonomous emergency braking (AEB) system which can respond to vulnerable road users as well as to other vehicles. The system performed adequately in tests of its response to pedestrians. The system’s response to cyclists was good, with collisions avoided in many test scenarios.

In the frontal offset test, protection of all critical body areas was rated as good for both the 6 and 10 year dummies. In the side barrier impact, protection of head of the 10 year dummy was rated as marginal, based on readings of deceleration, but protection was otherwise good. The front passenger airbag can be disabled to allow a rearward-facing child restraint to be used in that seating position. Clear information is provided to the driver regarding the status of the airbag and the system was rewarded. All of the child restraint types for which the car is designed could be properly installed and accommodated. 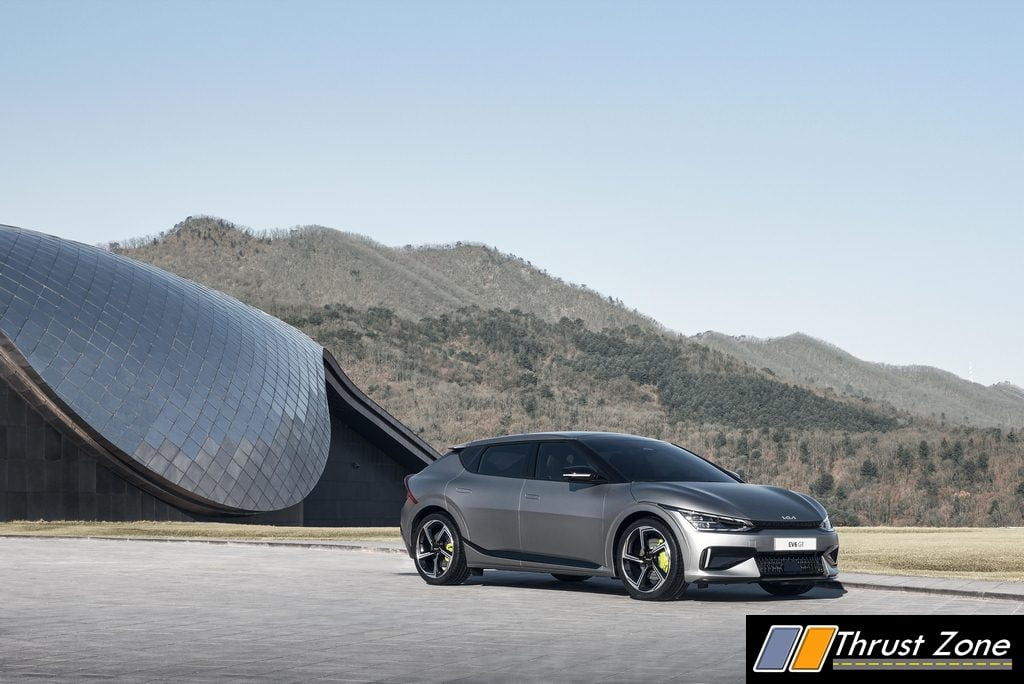 The EV6 has a seatbelt reminder system on the front and rear seating positions. The AEB system performed well in tests of its response to other vehicles, with impacts avoided in most test scenarios. A speed assistance system combines camera information with digital mapping to identify local speed limits and presents this information to the driver, allowing the limiter to be set appropriately. A lane support system gently corrects the vehicle’s path if it is drifting out of lane and intervenes more aggressively in some more critical situations.