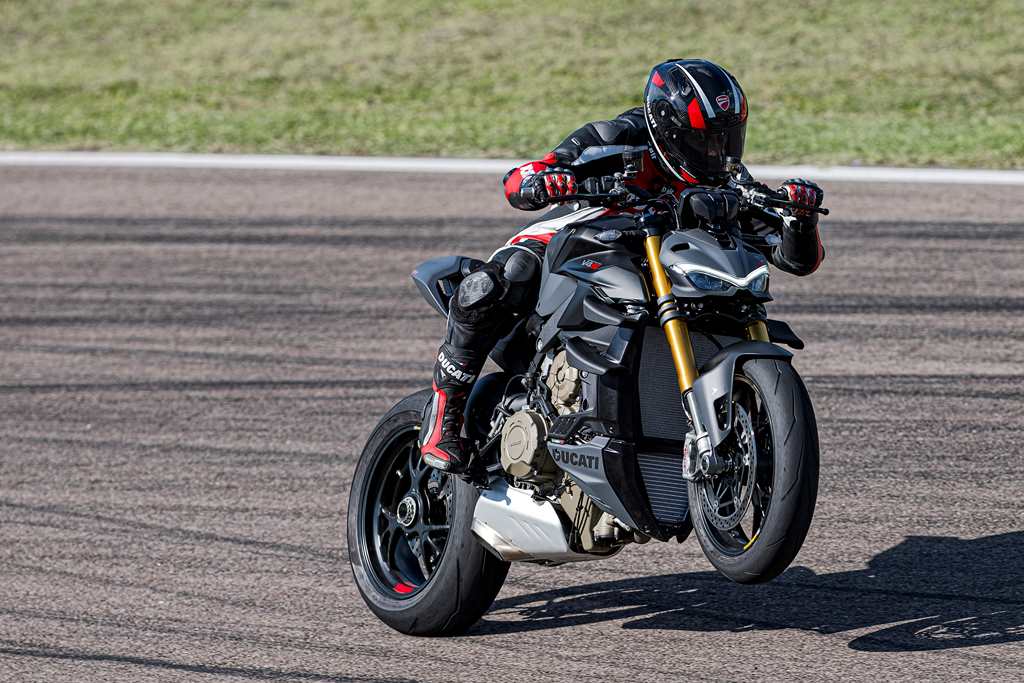 Ducati presented the new Streetfighter V4 family With the V4 and V4 S models, together with the more exclusive and performing V4 SP2, Ducati continues in the application and evolution of the winning “Fight Formula” to remain at the top of the segment with an unrivalled level of equipment.

Unveiled to the public in 2020, the Streetfighter V4 was an instant success and set new performance benchmarks in the super sports naked segment. Universally appreciated for its aggressive and minimalist aesthetic, characterized by a front inspired by the Joker of the comics, the Streetfighter V4 immediately entered the hearts of enthusiasts.

The natural evolution of the family is a bike that pushes the concepts of the “Fight Formula” even further, the key elements of which are the Panigale V4 stripped of the fairings, high and wide handlebar, 178 kg weight, 208 hp Desmosedici Stradale engine, biplane wings and latest generation electronic package. An improvement that follows that of the Panigale V4 family.

Ducati Streetfighter V4 2023 transmits sportiness, thanks to the standard single-seater configuration with saddle and passenger footrests supplied.
The design of the Streetfighter V4 is direct and minimal, with its full-LED front light and its V-shaped DRL that recalls the Panigale V4’s front view. The low, forward-canted front, as to extend the strong lines of the tank, gives the bike a predator look.
The fuel tank has the same shapes as on the Panigale V4 2022, which are designed to better support the rider during braking and cornering. It has a greater capacity (17 litres) and is embraced by new side covers.

The new “Front Frame” and the Desmosedici Stradale are left uncovered as much as possible, with a minimal bodywork that, through streamlined lines and sculptural volumes, create a clean, essential ensemble. In the V4 S version, the Streetfighter 2023 is available in a new, gritty “Grey Nero” livery, played on the contrast between the grey and the various black tones – dark and lucid – of the bodywork, that bring out the technical components like brakes and suspension and give the motorcycle an ever more aggressive, but still refined look. The new Streetfighter V4 implements the Power Modes logic already developed in the Ducati Panigale V4 and V4 S with calibrations dedicated to the Desmosedici Stradale engine in the Streetfighter configuration. There are four engine delivery strategies: Full, High, Medium, Low. Full and Low are newly devised, while High and Medium have been revised in strategy. Full Power Mode allows the engine to express its full potential with torque curves without electronic filters, except for first gear. For the High and Medium Power Modes, a new Ride by Wire map management system has been developed with dedicated calibration for each of the six gears, which ensures the rider always obtains the optimum thrust every time the throttle is opened. The Low Power Mode, on the other hand, has been designed for riding on low-grip surfaces, limiting the maximum power of the bike to 165 hp and offering a particularly manageable throttle response. The calibrations dedicated to the Streetfighter V4 guarantee maximum correlation between the torque value required by the rider and that actually delivered.

The Streetfighter V4 in the 2023 version sees the introduction of the brand-new Wet Riding Mode to make riding even safer on low-grip surfaces. The standard equipment is enriched by a lithium-ion battery for the S version (1.7 kg lighter than the previous one and already equipped on the V4 SP version).

The dashboard of the new Streetfighter V4 also follows the evolution traced by the Panigale V4. The graphics are revised in all views, to make the information simpler and more descriptive and support in the calibration of the various parameters.
As on the Panigale V4, the gear change is indicated via an external green LED signal. The dashboard offers the “Track Evo” display mode, which replicates the layout used on the MotoGP Desmosedici and guarantees an immediate view of the most important information and the intervention of the electronic controls.

The Streetfighter V4 2023 also evolves thanks to the new Engine Brake Control (EBC) EVO 2 software which guarantees better stability, precision and directionality in the braking and corner entry phases and the possibility for the rider to define more precisely the electronic setup for each use. This software features a different gear-by-gear calibration on each of the three selectable levels. The new strategy was developed to optimize the intensity of the engine brake as a function of the load on the rear end. In the first braking phase, when there is little load on the rear tyre, the EBC EVO 2 provides less engine brake, then increasing it as you approach the centre of the corner, where the intervention of the engine brake makes the greatest contribution in slowing down the bike and closing the line. Thanks to this modification, which guarantees a more balanced intervention of the control on the engine brake in all riding conditions, the locking of the rear wheel in the most demanding braking sections is also reduced. The Streetfighter V4 ’23 implements also a new strategy for the Ducati Quick Shift (DQS) which improves the fluidity of shifting at every degree of opening of the throttle, both when the latter is partialized and when it is completely open, dealing with the two situations in a different way.
In partialized throttle shifting, the strategy acts both through an injection cut and a reduction of advance, making shifting in road use smoother thanks to the absence of engine shutdowns and re-starts. In fully open throttle shifting, typical of track use, the DQS strategy is refined with an evolution of the torque restitution phase that guarantees more stability to the bike and a more homogeneous and therefore more profitable thrust in the lap time.

Finally, an update of the cooling fan control strategy, which offers better management of operating temperatures and greater thermal comfort for the rider already at typical road use speeds, is added to these electronic changes.

On the new Streetfighter V4, the chassis also follows the evolution of the Panigale V4 family to offer enthusiasts improvements in stability, front-end feeling and riding safety. The chassis includes Front Frame and single-sided swingarm, both in aluminium, with upside-down fork and mechanically adjustable shock absorber on the V4 standard version.
The Streetfighter V4 S features semi-active Öhlins suspension (NIX30 upside-down 43 mm fork and TTX36 shock absorber) with SmartEC 2.0 interface, gaining in versatility, effectiveness and rapidity in set-up. In addition, on the V4 S version, the rims are Marchesini forged in aluminium alloy with important benefits in terms of nimbleness when changing direction and responsiveness in acceleration and braking thanks to the reduction of unsprung masses.

As on the Panigale V4, the swingarm pivot of the Streetfighter V4 2023 is positioned 4 mm higher, increasing the anti-squat action that helps the rider thanks to greater stability, precision and the ability to maintain the trajectory when exiting corners and, in general, in all acceleration situations.
The weight distribution also moves towards the front, loading it more and thus increasing accuracy and speed in corner entry. Finally, the ergonomics benefit from the new layout of the fuel tank, the shape of which offers greater support to the rider during braking and cornering. The wet weight of the Streetfighter V4 S 2023 stands at 197.5 kg. 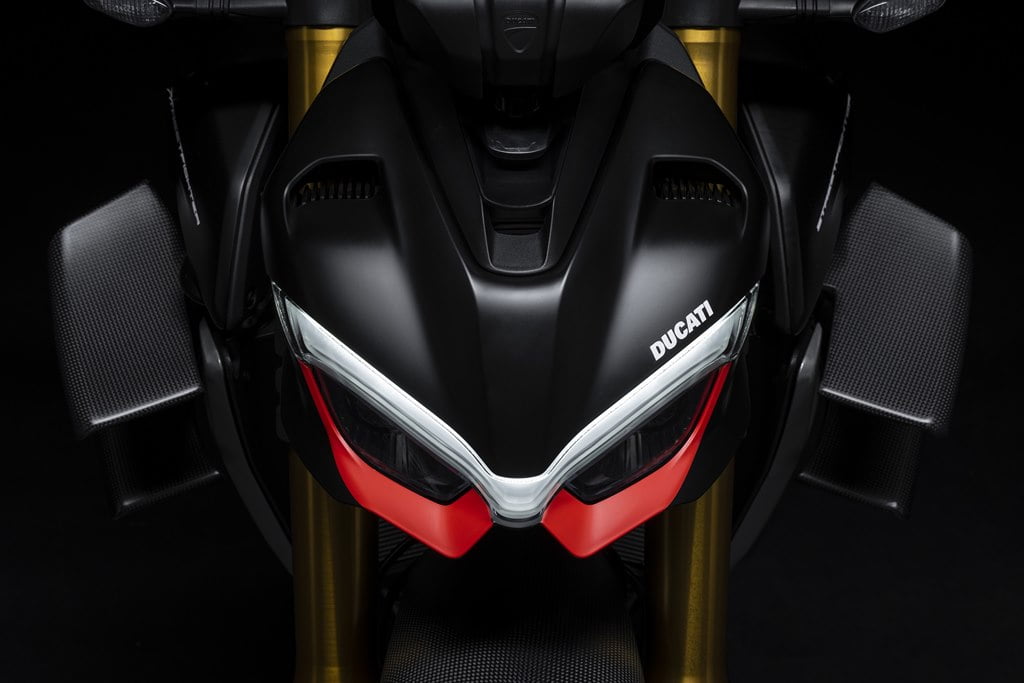 The 1,103 cc Desmosedici Stradale, capable of delivering 208 hp at 13,000 rpm and 123 Nm in Euro-5 configuration, has been revised in calibration to match the larger diameter of the silencer outlet, introduced in order to reduce the exhaust back pressure. In addition, on the right side there is the clutch cover of the Panigale V4, which allows you to easily mount the dry clutch and the clutch cover protection.

To push the performance of the Streetfighter V4 2023 even further, Ducati also presents the top-of-the-range Streetfighter V4 SP2 model in a numbered version. A bike ready to hit the track, thanks to exclusive technical equipment that combines the “Fight Formula” with the “SP” specifications, making it even more effective in sports riding and in particular on the track.

Streetfighter V4 SP2 is offered in the “Winter Test” livery, designed by the Centro Stile Ducati taking inspiration from the Ducati Corse bikes used during the pre-season tests of the MotoGP and SBK Championships. The matt black of the bodywork, combined with the matt carbon finish of the rims and wings, contrasts with the bright red accents and the brilliance of the exposed brushed aluminium tank, which we also find on the side covers of the radiators. The progressive number of the bike is lasered on the handlebar.

Streetfighter V4 SP2 is equipped with 5 split-spoke carbon rims*, 1.4 kg lighter than the forged aluminium ones mounted on the Streetfighter V4 S and able to reduce the moment of inertia by 26% at the front and 46% at the rear, making the bike significantly more nimble and lighter when changing direction. The Brembo Stylema R® front brake calipers* guarantee high braking power, as well as exceptionally consistent performance even in the case of prolonged use on the track*.

On the Streetfighter V4 SP2 the Desmosedici Stradale is equipped with the STM-EVO SBK dry clutch*, which guarantees a better slipper function, even in the most aggressive of climbs, and more fluidity in all “off-throttle” phases, essential to be effective on the track when riding at the limit.
A contribution to performance between the curbs also comes from the Öhlins suspension with springs and hydraulics identical to those of the Panigale V4 which guarantee the rider the right confidence for riding at the limit

The equipment is completed by adjustable aluminium foot-pegs machined from solid that increase the lean angle and allow the rider to find the optimal position in the saddle, carbon front mudguard and by usable accessories on “track days,” such as an open carbon clutch cover**, a cap for removing the license plate holder and screws for removing the mirrors**.

There is a wide range of accessories, which allow you to customize the Streetfighter V4 making it even sportier, starting with the Ducati Performance by Akrapovič full-racing exhaust**. Equipped with high silencers at the side of the tail, it allows a reduction of the total weight of 5 kilos and raises the maximum power to 220 hp. Noise is within the limit of 105 dB (102 dB with the dB killer installed).

The accessories catalogue also features street-legal slip-on systems, mudguards, aero kit and carbon fibre frame and crankcase protections, billet aluminium controls, but also tyre warmers and stands for those who want to use their Streetfighter V4 on the circuit.