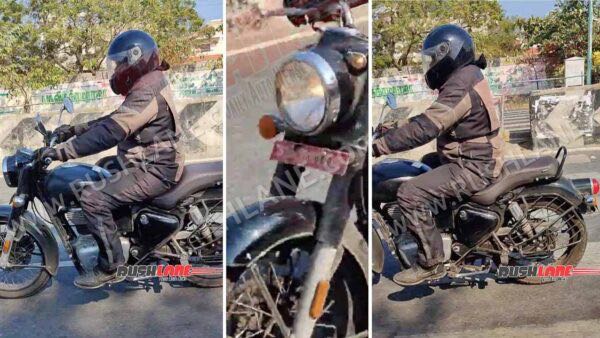 In the run-up to the launch of the 2023 Bullet, the test mule of the bike has been spotted for the very first time. The 2023 Royal Enfield Bullet 350 comes with a lot of visual changes and Royal Enfield (RE) is expected to equip the new model with some important mechanical alterations as well.

The launch is aligned with the strategy of the RE where it is updating its old models while bringing in new products for its customers across the globe. The company has been specifically focusing on the development of new platforms and engines that will help it to eventually carve a place for itself in the global motorcycle arena.

The spotted test mule comes equipped with a double-cradle frame and completely new front and tail lights. The seat also seems to have undergone change in order to offer more comfortable ride experience to both rider and pillion. In addition, RE has also replaced some old panels with new ones to give the new model an updated look. That said, Royal Enfield has carried over the DNA of the Bullet which is at the heart of its appeal among enthusiasts.

2023 Royal Enfield Bullet 350 will use a completely new platform and get a 350cc J-Series engine for churning more refined power and performance. The expected output would be around 20 bhp and 27 Nm and the engine will be mated to a 5-speed gearbox. The suspension setting is also expected to go under the knife in the interest of riding comfort and convenience.