It’s twenty-five years since the Ducati 916 made its first appearance. A bike destined to transform the world of motorcycle design and to make fans all over the world fall in love. The 916 was uniquely stylish, elegant, light and technologically innovative: a true pillar of Made in Italy motorcycles.

To celebrate this key anniversary, Ducati will present the Panigale V4 25° Anniversario 916. This limited edition will consist of only 500 individually numbered bikes and will sport an original livery and exclusive racing components. The motorcycle will be presented on 12 July at Pebble Beach, California, at 8 p.m. (PDT).

The Panigale V4 25° Anniversario 916 will be unveiled in the presence of ‘King’ Carl Fogarty, four-times winner of the World Superbike Championship with Ducati in the 1990s.

During the World SBK race at Laguna Seca, to be held on Saturday 13 and Sunday 14 July, the Aruba.it Racing-Ducati team will pay a further tribute to the 916 when Alvaro Bautista and Chaz Davies’ bikes take to the track with a special livery inspired by the graphics of the Panigale V4 25° Anniversario 916.

Born from Massimo Tamburini’s sketches, this bike has revolutionized the world of motorcycle design and has made fans fall in love all over the planet. Incredibly innovative in its style, elegance, lightweight and compactness, by many it’s believed to be the sexiest and most iconic bike ever built.

The Ducati 916 wasn’t just a beautiful bike and an enormous sales success. It also won World Superbike championships: the 916 SBK was a force to be reckoned with even as it made its debut in 1994, and the following years saw it win 120 races, 8 constructors’ titles and 6 riders’ titles, four of them with Carl Fogarty. The Englishman has won 55 races with Ducati, of wich 43 riding a Ducati 916 SBK and 996 SBK. “King Carl” and the 916 remain the most successful “couple” in Ducati SBK history.

Ducati has decided to celebrate this anniversary by building a special 916-dedicated version of the Panigale V4. Hence the genesis of the Panigale V4 25° Anniversario 916: a unique limited-edition bike of only 500 pieces, designed to let all true Ducatisti re-live the spirit of the 916. 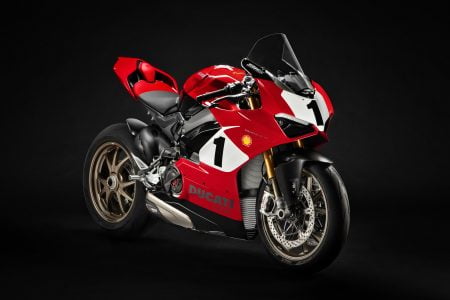 The “25° Anniversario 916” is built on the mechanics of the Panigale V4 S. This has been upgraded with racing content from the Panigale V4 R such as the Front Frame, designed to Ducati Corse specifications. The look of the bike combines a special livery with forged magnesium wheels, a titanium type-approved Akrapovič exhaust and a long list of Ducati Performance components.

The presentation of the bike was also an occasion of remembrance, honouring Californian Carlin Dunne, the Spider Grips Ducati team rider who recently died at Pikes Peak. Jason Chinnock announced Ducati’s decision to remove the number 5 from selling, the same number that Dunne used to race with. The bike will be auctioned, with proceeds going to a fund-raising effort aimed at providing Carlin’s mother with support. Starting from Saturday morning, the Panigale V4 25° Anniversario 916 will go on display at Ducati Island (the space Ducati traditionally sets aside for its fans during American races).

he Panigale V4 25° Anniversario 916 will arrive in dealerships starting from October 2019 at a price of INR 54,90,000 Ex-showroom (price is country specific)