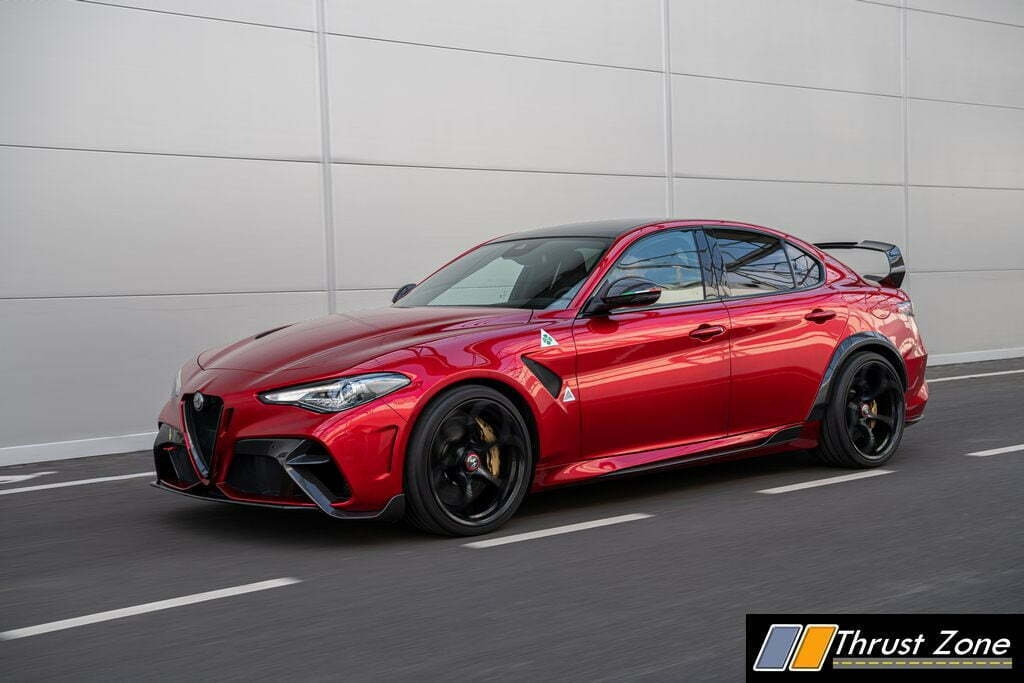 On June 24, Alfa Romeo will reach an important milestone in its remarkable history: 110 years in business. During that century-plus span, Alfa Romeo engineers and designers have relentlessly pursued innovation, while always remaining true to the brand’s DNA. Over the years, this DNA – the perfect combination of sportiness and elegance – has created not only some of the most iconic vehicles ever built, but also vehicles that are right at home both on the racetrack and in any beauty contest. To mark its 110th birthday, Alfa Romeo presents a vehicle that fully signifies a return to the brand’s origins, while paying tribute to one of the most emblematic vehicles of Alfa Romeo: Giulia GTA.

The acronym GTA stands for “Gran Turismo Alleggerita” (alleggerita being the Italian term for “lightened”), and it originated in 1965 with the Giulia Sprint GTA, a specific version derived from the Sprint GT, designed as a sports car and presented at the Amsterdam Motor Show staged that same year. The body of the Giulia Sprint GT was replaced with an identical version in aluminum, for a total weight of 1,642 lb compared to the 2,094 lb of the road version. A second variation concerned the 1.6 twin cam engine which, in the road configuration, with dual ignition, reached an impressive output of 115 hp.

The technicians of Autodelta, the official Alfa Romeo racing team, chose it as the reference vehicle for the Touring category, and developed it to achieve a maximum output of 170 hp. The model’s success in competitions was then immediate: three consecutive “Challenge Europeo Marche”, tens of national championships and hundreds of individual races in every part of the world. And the way it ramped up the image of the entire range was also impressive: Giulia Sprint GTA expressed the claim “A victory a day in your everyday car” to perfection. From then on, the GTA made a name for itself as the undisputed icon of Alfa Romeo sportiness and the acronym GTA became so successful that the public soon associated it with all the sporty Alfa Romeo vehicles in general. 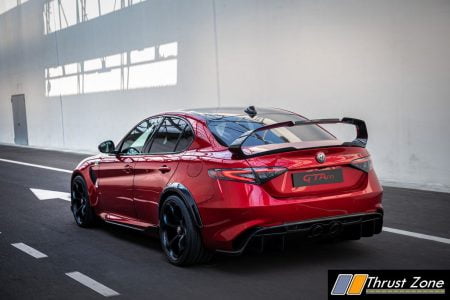 On the year of its 110th anniversary, Alfa Romeo intends to break a few rules: it doesn’t intend to talk about history, especially its own, nor does it want any gifts for its birthday. Instead, it prefers to give a gift to Alfa enthusiasts by presenting the Giulia GTA. Today, this is a real return to the roots of Alfa Romeo, planted deep in the world of performance and grand touring.

For the new Giulia GTA, Alfa Romeo engineers have striven to improve aerodynamics and handling but above all to reduce weight: the same guidelines followed for the 1965 Giulia GTA. The active aerodynamics were specifically studied to increase the downforce. These solutions contain technical know-how that comes directly from Formula 1, thanks to the synergy with Sauber Engineering and the use of the Sauber Aerokit. The same task is assigned to the side skirts, the specific rear spoiler and the active front splitter.

The titanium Akrapovic central exhaust system integrated in the carbon fiber rear diffuser is also new, as are the 20-inch center lock wheels, appearing for the first time on a sedan. The handling at high speeds has been improved by widening the front and rear wheel tracks by 50mm and developing a new set of springs, shock absorbers and bushings for the suspension systems. On GTAm, the aerodynamic front piece has been optimized to an extreme level, by adding a larger front splitter and a real carbon rear wing, which ensure a perfectly balanced load at high speeds. In terms of performance, the powerful 2.9 V6 Bi-Turbo, made entirely of aluminum and capable of unleashing no less than 505 hp in the standard configuration, reaches a power output of 540 hp on Giulia GTA, thanks to meticulous calibration work performed by Alfa Romeo engineers. The same team has also succeeded in optimizing the implementation of the new Akrapovic specific exhaust system, with its unmistakable sound.

Moving inside the car, several new details stand out: the trim in 100% Alcantara® on the dashboard, door panels, glove compartment, side pillars and the central trim on the seats. Alcantara® is used even more extensively on the GTAm version, where the rear bench has been removed, leaving room for a fully upholstered “basin”, hosting specific moldings designed to hold helmets and fire extinguisher. The new matte carbon inserts endow the interior with a distinctive technical and aesthetic elegance. In the new GTAm, the interior is unique in that it features a roll bar, no door panels or rear seats and the door is opened with a belt in place of the handle, another touch that comes from the racing world.

But power on its own is not enough to ensure extraordinary performance. The work done to reduce vehicle weight has been meticulous and it has reaped particularly impressive results, with a total weight reduction of 220 lb, thanks to the adoption of lightweight materials such as carbon fiber for the drive shaft, hood, roof, front bumper, front wheel arches, rear wheel arch inserts and, on the GTAm, the shell of the specific sporting seats with 6-point Sabelt safety belts. Further, lightweight aluminum is used in the engine, doors and suspension systems, and various other composite materials are used throughout. For instance, Lexan – a unique polycarbonate resin that comes straight from the world of motorsports – has been used in the side and rear window frames, further contributing to the weight reduction.

The result is a weight set around 3,350 lb which, combined with the increase in power to 540 hp, brings the weight/power ratio to an excellent level, 6.2 lb/hp, making Giulia GTA and GTAm capable of delivering extraordinary performance. Its acceleration from 0 to 62 mph is lightning fast – thanks to the Launch Control system, the chronometer stops at just 3.6 seconds. The Giulia GTAm is the two-seater configuration approved for on-road use, with front splitter and larger visible rear wing in carbon, the ultimate expression of sportiness. In the GTA version, with the same power, Giulia offers four seats, no rear roll-bar; spoiler and splitter optimized for daily use on the road; the same door panels, seats and windows as those of the Giulia Quadrifoglio. The result is a veritable supercar for everyday use. 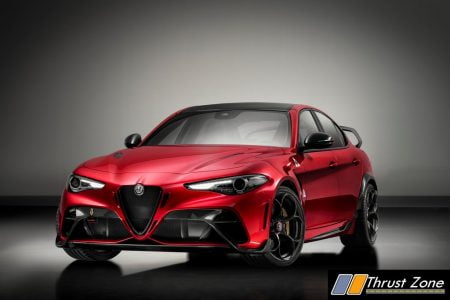 Alfa Romeo Giulia GTA and its extreme version, Giulia GTAm, will be built in a limited edition of only 500 units in total, all numbered and certified and ready to take up their place alongside their 1965 forerunner as one of the most sought-after collector’s items. They are not only magnificent to look at, but they are also ready to unleash impressive power on the road, usable thanks to a series of sophisticated technical solutions. The same exclusivity found in Giulia GTA and Giulia GTAm will also characterize a particularly exclusive dedicated customer experience, designed to treat the 500 lucky owners to a unique interaction that is 100 percent Alfa Romeo.

After the advance bookings, which are now officially open and will close as soon as the 500th unit has been reserved, the sales process will be one-to-one, with a brand ambassador product specialist following each customer from order to delivery. But the buying experience doesn’t stop at the dedicated sales process. Indeed, the new owners will also receive a personalized experience package kit, which includes a Bell helmet in special GTA livery, a full racing set by Alpinestars (race suit, gloves and shoes) and a personalized Goodwool car cover for protecting his or her GTA or GTAm. In addition to other equipment for true enthusiasts, the Alfa Romeo customer experience also includes a specific driving course devised by the Alfa Romeo Driving Academy.