All New Ducati Diavel V4 Revealed – Like The Looks? 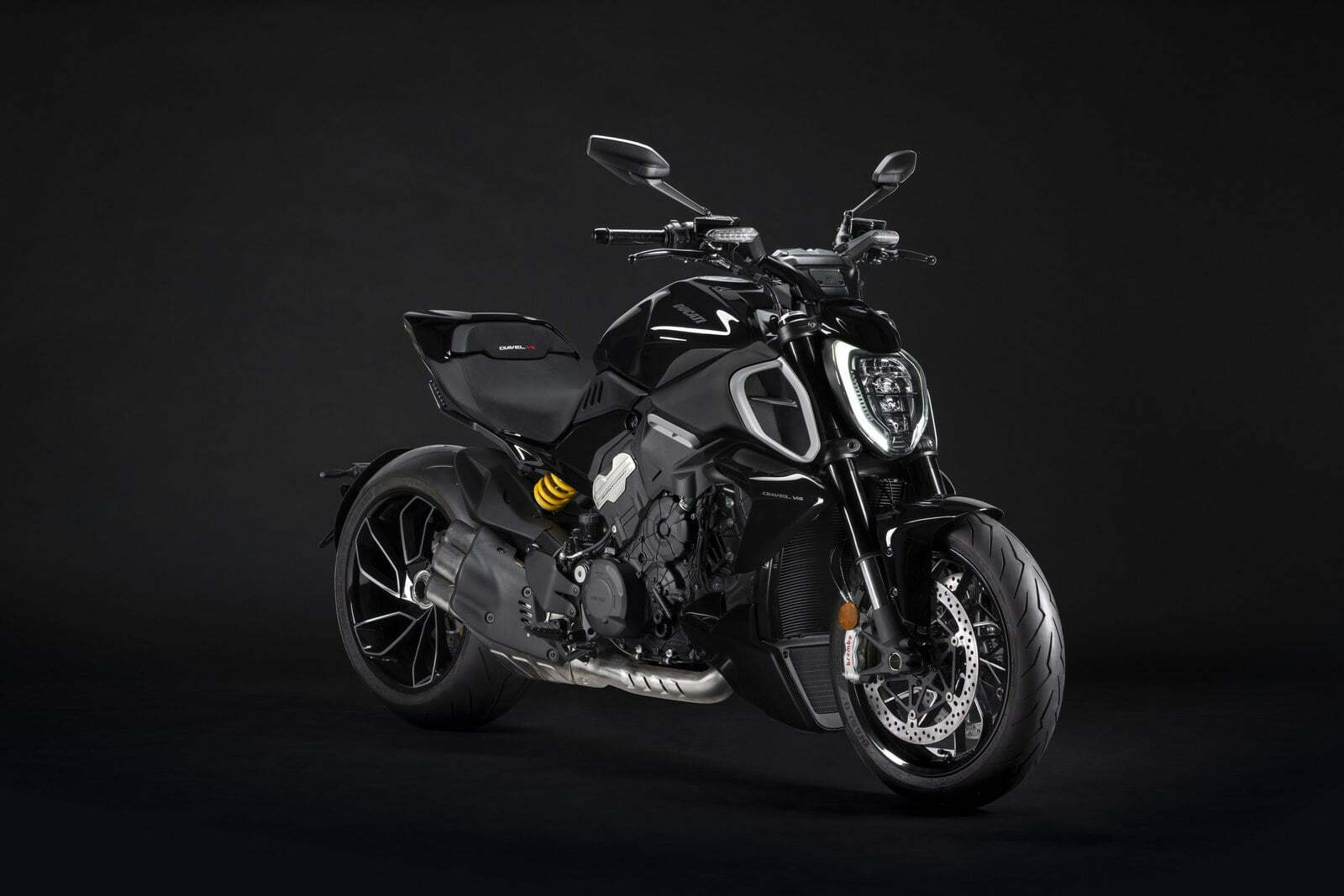 The Diavel V4 is unique, unmistakable and with a bursting personality. With the introduction of the sophisticated V4 Granturismo engine, the Diavel’s performance becomes even more astonishing. Ducati’s 1,158 cc V4, with its 168 hp and 12.8 kgm of torque, is the ideal engine for a muscle cruiser, capable of combining linearity at low revs with vigorous torque throughout the entire range of delivery.

The Diavel V4 communicates an important presence from the very first glance. Muscular, gritty, with broad “shoulders” and proudly visible four-exits exhaust that immediately declares the sophisticated engine architecture. The Diavel V4 draws inspiration from muscle cars, from the aesthetics of superheroes and reproduces the image of an athlete ready to sprint to the starting blocks, with all the masses concentrated on the front and an agile, streamlined tail.

The signature front and rear light clusters and turn signals, obviously full-LED, also contribute to Diavel V4’s unmistakable appearance. The front DRL* changes shape, with a double-C profile that evolves from the previous stylistic feature. The rear light cluster consists of a matrix of punctiform LEDs positioned under the tail , also with an unmistakably Ducati optical signature: a unique and spectacular solution that makes the bike instantly recognizable. Dynamic turn signals* are integrated into the handlebars, in front of the brake and the clutch control reservoirs.

Another distinctive element of the Diavel V4 is the massive 240/45 rear tire. The wheels are a five-spoke alloy with a profile embellished with machined surfaces and are one of the most refined elements of the Diavel V4’s aesthetics.* Only in countries where legal. 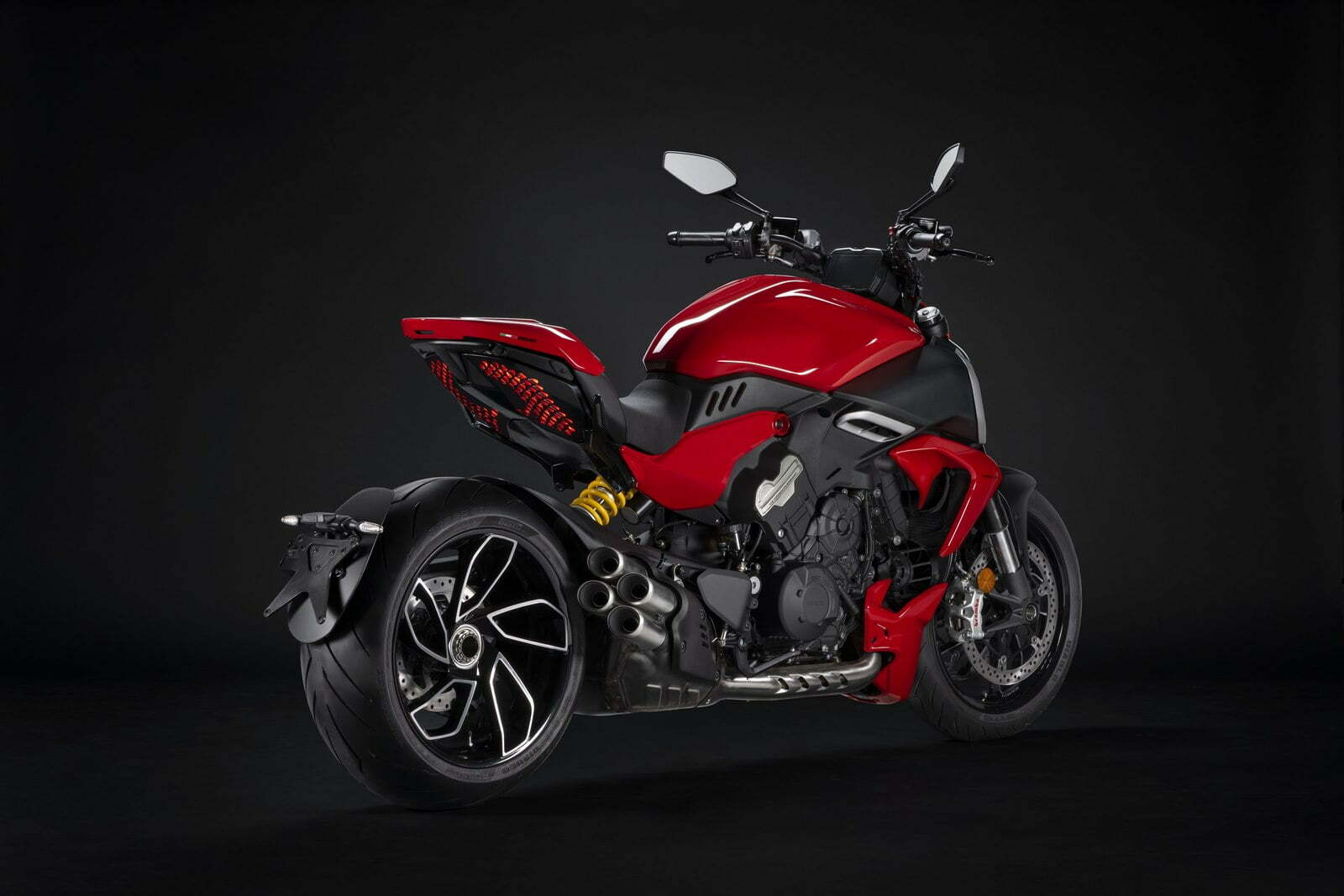 The Diavel adopts the 1,158 cc V4 Granturismo engine, a central element of the bike’s design and at the same time a technical choice that improves performance, dynamics and riding pleasure thanks also to the sophisticated choice of a counter-rotating crankshaft, which reduces the gyroscopic effect while increasing the bike’s agility.

Powerful (168 hp), rich in torque at every rpm (with a peak value of 12.8 kgm at 7,500 rpm, 0.5 more than the Multistrada V4) but also extremely light and compact, the V4 Granturismo (which derives from the Desmosedici Stradale of Panigale V4 and Streetfighter V4) is at the same time smooth, regular and enjoyable from the lowest revs. It is also characterized by low running costs, with major maintenance at 60,000 km intervals (a record value on the world scene) and efficient in fuel consumption and emissions thanks to the extended deactivation system. This feature shuts off the rear bank not only when the vehicle is stationary, but also while riding at low engine speeds under reduced engine load.

The Twin Pulse firing order, together with the dedicated exhaust system developed with great attention to “sound quality” , unmistakably characterizes the stamp of the V4 Granturismo. The extended deactivation system for the rear cylinders, which allows the engine to operate as a twin-cylinder or as a four-cylinder with an imperceptible transition due to its gradualness, generates a change in the tone of the exhaust noise as it switches from one mode to the other. A deeper sound, with lower frequencies, characterizes the V4 Granturismo when only the two front cylinders are active. The frequencies, on the other hand, become higher when all four cylinders are operating.

The exhilarating performances of the V4 Granturismo engine are combined with surprising agility and dynamics for such a motorcycle. The Diavel V4 has a kerb weight without fuel of 223 kg, for a saving of more than 13 kg (-5 on the engine, -8 on the vehicle) compared to the Diavel 1260 S , thanks to the lightness of the V4 Granturismo and specific actions to many of its components. All this with component refinement and effectiveness, with an inverted 50-mm fork and a cantilever-pattern shock absorber, both fully adjustable. The braking system relies on Brembo Stylema® calipers and dual 330 mm front discs.

The result is a motorcycle capable of breathtaking acceleration and deceleration. In fact, the performance of the 168 hp V4 Granturismo, combined with the 240/45 rear tire and a dedicated gearing, allows it to accelerate from 0 to 100 km/h in less than 3”, with a truly impressive thrust.
The braking system, supersport-like, with 330 mm discs and Brembo Stylema® calipers, on the other hand, ensures record-breaking performance, with peak deceleration values of as much as 11.5 m/s2 : a value that generally characterizes racing motorcycles, obtainable only thanks to a very refined calibration of the ABS system.

The rider – who can enjoy a low seat (at 790 mm from the ground), central footpegs and high handlebars set 20 mm closer than on the Diavel 1260, which make it easier to use, especially when maneuvering – is in the center of the bike, with a riding position that also visually conveys a feeling of control and self-confidence.
Comfort also improves substantially on long rides thanks to the rear suspension, which increases in travel by 15 mm, and especially to the wide, well-profiled seat, designed to offer maximum freedom of movement in every direction, thus also offering benefits in terms of efficiency in sportier riding.
The passenger can count on a spacious and comfortable seat, footrests that retract under the tail and a telescopic rear grab bar. Footpegs and grab bar are effectively invisible in the closed position, and together with the passenger seat cover, supplied as standard and easily installed, allow the Diavel V4 to be transformed from a two-seater to a single-seater with just a few gestures.

The rider can fully and safely exploit the performance of the Diavel V4, thanks to a comprehensive electronic package that enhances the sport naked soul of this bike. The Diavel V4 offers three Power Modes and four Riding Modes: Sport, Touring, Urban and the new Wet , designed for low-grip surfaces. The Riding Modes allow the rider to adapt the engine delivery and the intervention of the riding aid systems (Ducati Traction Control in Cornering version, ABS Cornering and Ducati Wheelie Control) to the rider’s situation and preferences. 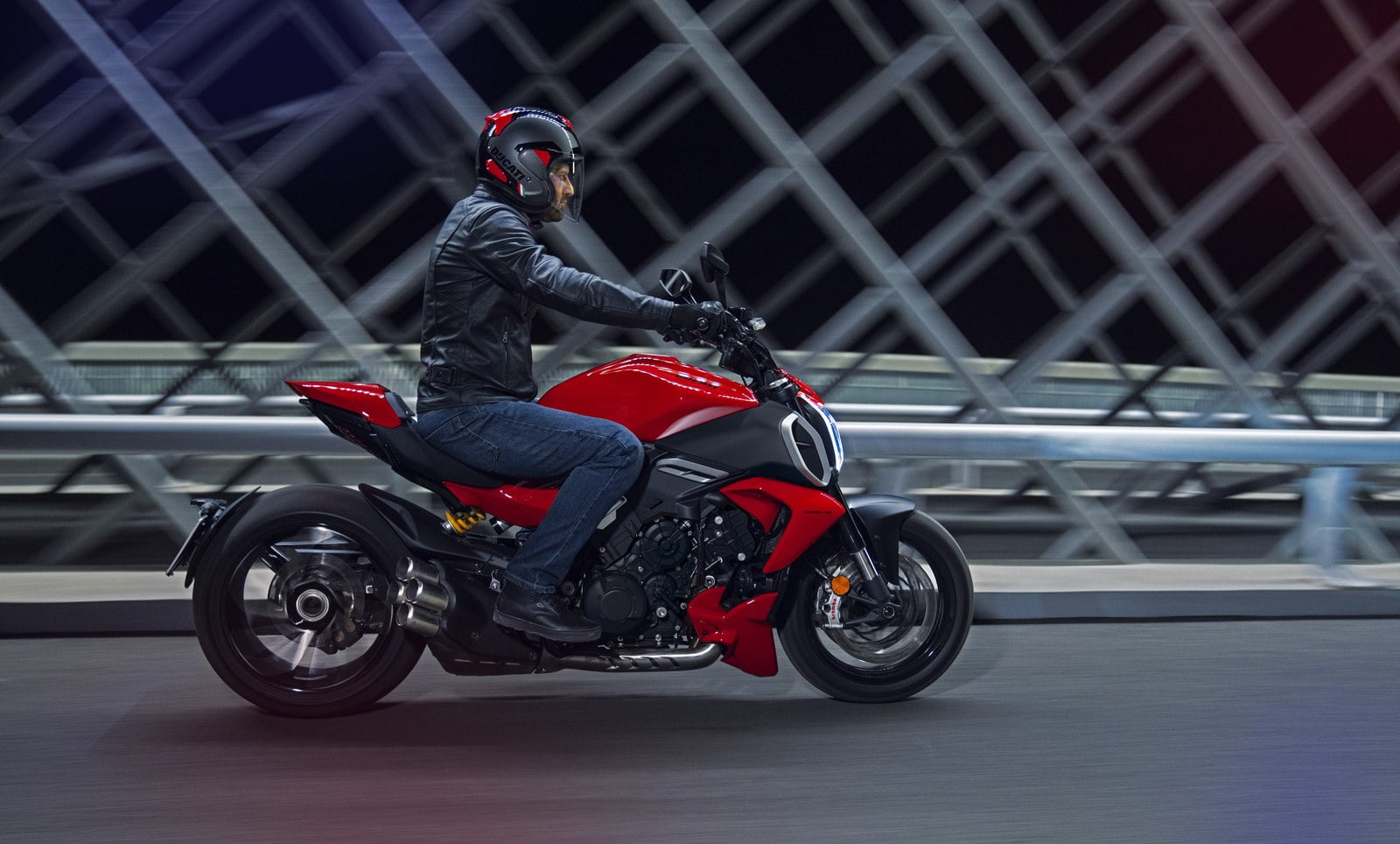 The rider can manage all the electronic systems through backlit controls on the handlebars and the new 5-inch color TFT dashboard, which also offers Bluetooth connectivity to pair the smartphone and use it for calls, text messages and music, or use the Turn-by-turn navigation system (available as an accessory) via the Ducati Link App.

Enthusiasts who wish to enhance the touring capabilities of their Diavel V4 will find many options in the Ducati Performance catalogue, starting from the semi-rigid cases with a total capacity of 48 liters for which Diavel V4 is ready (no frames needed) which along with the passenger backrest and the touring plexi allow comfortable trips even with a passenger. The sportier side of the Diavel V4, on the other hand, is amplified by the street-legal exhaust silencer with a cover and four titanium end caps. Billet parts, carbon parts, forged wheels and brake calipers in red or black color further expand the possibility of customizing the new Diavel V4.

The new Diavel V4 will arrive in the European dealerships starting from January 2023 (February 2023 for US) in the classic Ducati Red or in Thrilling Black. The dynamic video of the Diavel V4 can be seen on Ducati YouTube official channel. The press kit containing further information and all the pictures of the new model is available on Ducati Media House.