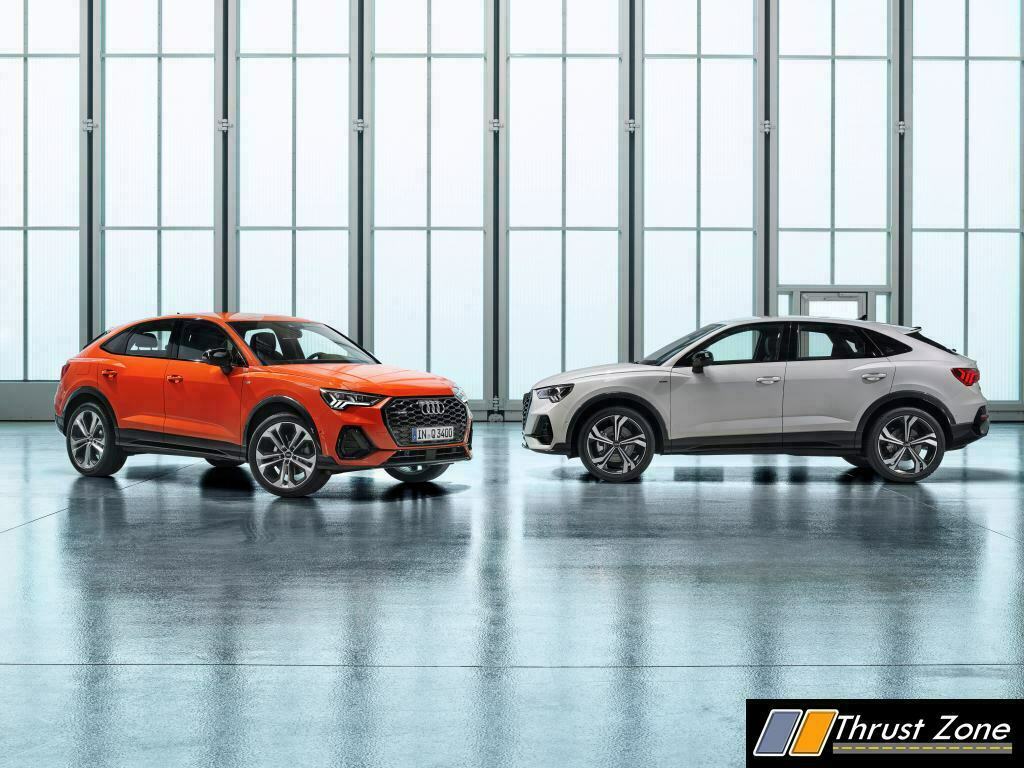 Audi is adding a compact SUV in coupé shape to its model range: the Audi Q3 Sportback. The black grille of the octagonal Singleframe is strongly three-dimensional in design, and this makes it particularly sporty. The same applies for the trapezoidal air inlets and the expressive bumper with its flat blade. The coupé-like passenger cabin acts as a contrast to the distinctive attachments, which are painted in contrasting colors and thus emphasize the SUV character. The low roofline gives way to flat D‑pillars and ends in a roof edge spoiler.

As a result, the Audi Q3 Sportback appears much longer than its sister model Q3. In addition, the SUV-coupé is almost three centimeters flatter, and thus has a more muscular appearance. Above the wheels, strong contours draw attention to the quattro drive, which comes as standard with most engines. Many light and shadow effects arise on the plastic-formed rear. The low window, flanked by aero trims, and the sporty bumper, which takes up the look of the air inlets, emphasize the width of the Audi Q3 Sportback. The reversing lights contribute to this as well: they run inwards in a tapered shape, just like the flat headlights. Audi supplies the latter in three versions up to Matrix LED technology, whose adaptive high beam intelligently illuminates the road as best suits the driving situation.

The Audi Q3 Sportback offers driving fun on various terrains. In the city, on long-haul routes, or on easy terrain – the compact crossover is a dynamic all-rounder. It features progressive steering as standard, whose gear ratio becomes increasingly direct as the steering angle increases, and the sport suspension. 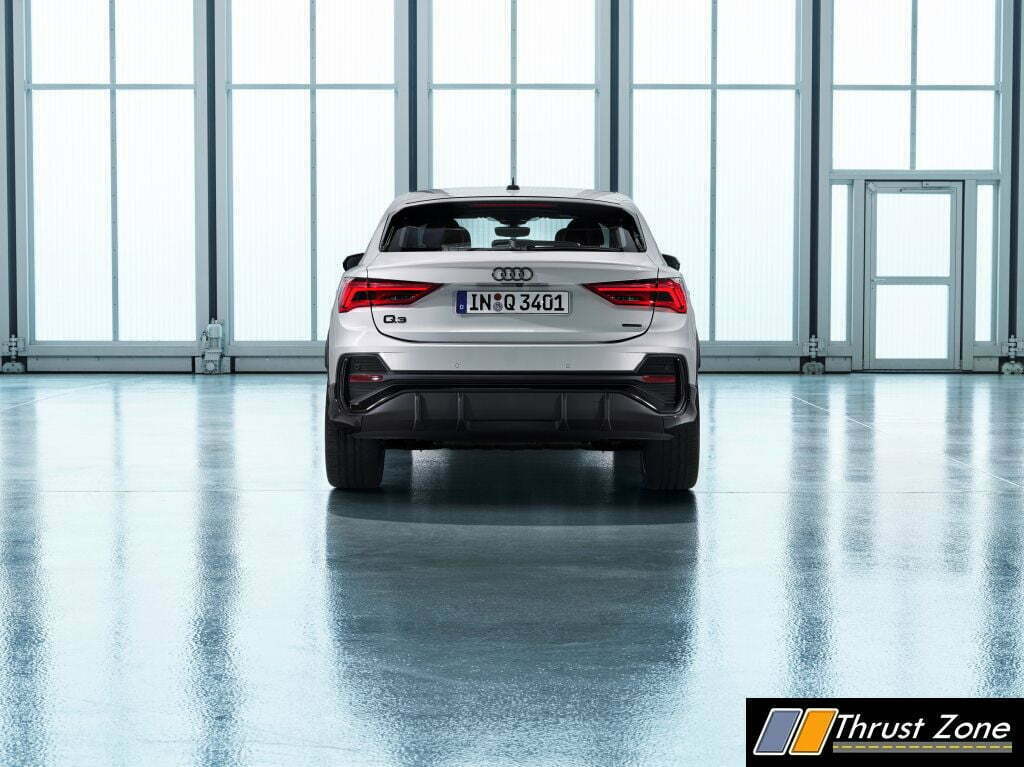 On request, the suspension is available with damper control, which further increases the range between dynamism and comfort. Depending on the driving situation, road condition, and personal preferences, the driver can vary the car’s characteristics via the standard dynamic handling system, Audi drive select, in six profiles, including the offroad mode. In addition to the engine and transmission set-up, this system also influences the electronically adjustable shock absorbers and the steering assistance. As an option, the hill descent control can offer support: it keeps the speed selected by the driver constant on an incline greater than 6%.

In the top engines, the quattro all-wheel drive takes on the job of force transmission as standard. Its central component is a hydraulic multi-plate clutch on the rear axle. Its electronic management combines outstanding stability and strong traction with a high level of driving enjoyment. At the limits of performance, the quattro drive works closely together with the wheel-selective torque control, It makes handling even more dynamic and stable by means of gentle brake interventions on the inside wheels with the quattro drive and the inside front wheel with the front drive.

The Audi Q3 Sportback is 4.50 m (14.8 ft) long, 1.84 m (6.0 ft) wide and 1.56 m (5.1 ft) high; its wheelbase measures 2.68 m (8.8 ft). This results in a large and highly variable interior. The rear seats offer space for three people. They can be moved 130 mm (5.1 in) longitudinally as standard; their backrests are divided into three sections, and their inclination can be adjusted in seven stages. The volume of the luggage compartment ranges from 530 l (18.7 cu ft) to 1,400 l (49.4 cu ft). The loading floor can be adjusted to two levels, and the rear shelf is located beneath it. As an option, Audi will deliver an electric tailgate that can also be opened and closed with a foot motion. The front seats – electrically adjustable and heated on request – offer a sporty position and a high level of comfort. Depending on the equipment, there are sport seats with contrasting stitching and colored stripes along the side panels.

In addition, Alcantara surfaces on the instrument panel and the armrests emphasize the progressive design philosophy. In the dark, the optional contour/ambient lighting package sets lighting accents with its 30 selectable colors. operating and display concept proves how Audi is pushing ahead with digitalization: Even the basic equipment includes a digital instrument cluster with a 10.25-inch screen diagonal, which the driver operates using the multifunction steering wheel. In the top-of-the-line system, MMI navigation plus, the displays appear in the Audi virtual cockpit, which offers many additional functions.

A touch display measuring 10.1 inches is positioned in the center of the instrument panel. When a function is selected, it emits acoustic feedback. Just like in the brand’s full-size class models, it is surrounded by wide, high-gloss black trim. Together with the air-conditioning control unit located beneath it, the display is ergonomically tilted 10° towards the driver. On request, the 12.3-inch Audi virtual cockpit plus is available with three selectable layouts, including a particularly dynamic view.

The flat menu structure is complemented by a control unit that uses natural language and can also understand free wordings. Entering a navigation destination and the MMI search are based on free text input. The system recognizes the driver’s most frequent destinations based on previous journeys, allowing it to generate suitable suggestions. When doing so, it takes into consideration statistical empirical values regarding the traffic load and time of day.

Together with MMI navigation plus, the online services of Audi connect are made available on board at LTE Advanced speed via a permanently installed SIM card. This includes, for example, online traffic information and the online points of interest service, which complements route guidance with photos, opening hours, and user evaluations. Thanks to the inter-connectivity of the Audi fleet, the Q3 Sportback receives and provides information about parking spaces on the roadside, hazard areas, and speed limits, which are detected via the on-board camera and vehicle sensors.

Traffic light information is a new feature among the Car-to-X services. The car receives data from a city’s traffic computer, as a result of which the driver receives information about traffic light phases in the Audi virtual cockpit. This allows drivers to adjust their speed pre-emptively, which increases efficiency and improves traffic flow. This offering is initially available in individual European cities and will be gradually extended depending on the infrastructure in the urban area. 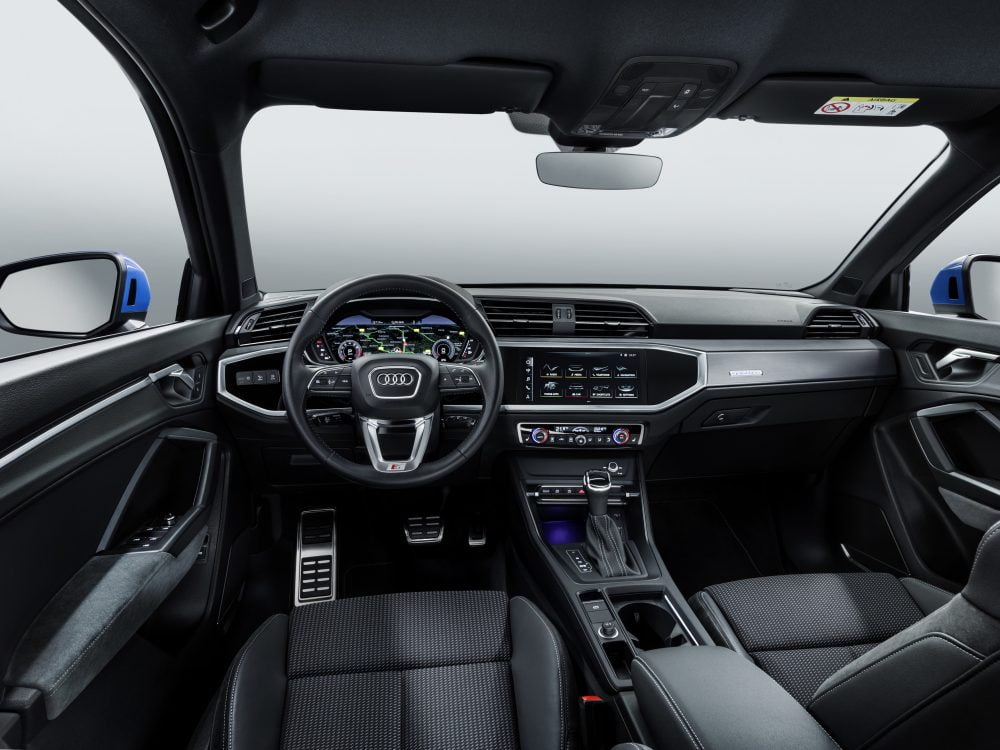 Another new feature is the cloud-based Amazon voice service Alexa, which streams music and audio books and also offers access to more than 80,000 Alexa Skills. Navigation with Google Earth™ and the hybrid radio, which automatically switches between FM, DAB and online streaming depending on the reception conditions, also form part of the Audi connect navigation & infotainment plus package. The voice control system uses the detailed knowledge in the cloud to answer the driver’s questions and commands.

the car and smartphone. This integrates Android and iOS cell phones into the on-board infotainment system. The content of the smartphone is shown in the MMI display via Apple CarPlay or Android Auto, and no cables are required if the top infotainment system is used with an iPhone. The Audi phone box and the Bang & Olufsen Premium Sound System with virtual 3D sound round off this comprehensive offer.

In the Audi Q3 Sportback, four standard systems are used for safety. These include the lane departure warning and the lane change warning. While the former helps the driver to remain in the lane, the latter points out critical situations when changing lanes, such as if there is a vehicle in the blind spot. The series scope in Germany also includes Audi pre sense front. If a head-on collision is imminent, it outputs a visual, acoustic, and haptic warning to the driver.

In an emergency, it causes full braking and initiates the Audi pre sense basic safety measures. This involves tightening the front seat belts, closing the windows and the optional sliding roof, and activating the hazard warning lights.

The adaptive cruise assist is a highlight of the optional systems. It takes the burden off the driver during longitudinal and lateral guidance. Ultra-modern systems such as the 360 degree cameras offer assistance with parking and maneuvering. They show the direct surroundings of the SUV coupé on the MMI display, and the driver can choose from several perspectives. The park assist automatically guides the car into and out of parking spaces. If, for example, the driver wants to back out of an entrance, the rear cross traffic assist warns about approaching vehicles that the system classifies as critical.

Delivery of the Audi Q3 Sportback in Europe will start in the fall. In Germany, the price for the 35 TDI S tronic is €40,200, while the 45 TFSI quattro S tronic is available from a starting price of €46,200. An exclusive edition model in two designs accompanies the market launch, Depending on their paint finishes, they are called “edition one dew silver” and “edition one mythos black.” In both models, the exterior is based on the S line and the black styling package. Dark decorative panels in the matrix LED headlights and 20-inch wheels make for an even sportier look. The interior features a silver edition model with the noble interior design selection and bright colors, while the black model is based on the dark interior S line, supplemented by blue Alcantara areas on the instrument panel and the armrests in the doors.