With the C 400 X in 2017 and the C 400 GT in 2018, BMW Motorrad presented two premium vehicles for the midsize scooter segment for the first time. Since then, the C 400 X has been impressing Urban Mobility segment customers with its dynamic ride characteristics, while the C 400 GT, as a Gran Turismo variant suitable for touring, stands out thanks to its enhanced range of comfort features. To make sure that this remains the case in the future too, BMW Motorrad had upgraded the two midsize scooters and, in addition to some significant technical optimisations, has also given them new colours and styles.

After the launch in early 2021, BMW Motorrad is planning to get them into India. The launch could happen in July 2021 and this will be the first maxi scooter from BMW and first premium scooter with such high capacity seen from any manufacturer in a long time. Honda did introduce Forza 300 but that came and went and nobody realized as it was limited to handful of units. Now, let’s dive deep into the C400 details and variants.

As before, the proven efficiency-optimized single-cylinder engine with an output of 25 kW (34 hp) at 7 500 rpm and a torque of 35 Nm at 5 750 rpm serves as the drive unit. Power transmission is via a CVT (Continuously Variable Transmission) gearbox and a torsionally stiff drivetrain swing arm with innovative swing arm bearing for minimum vibration and therefore maximum comfort. Thanks to current EU 5 homologation, the new C 400 X and C 400 GT remain the ideal partners for dynamic, carefree scooter fun.

For this reason the engine has been equipped with a so-called “electronic throttle grip” (E-gas) and an electrically operated throttle valve as well as a new engine management system. Further optimisations are a modified matrix and coating of the catalytic converter, a wideband oxygen sensor, modifications to the cylinder head, a new sensor on the generator cover, an adapted wiring harness and modified idle speed control. The idle speed regulator in the airbox has been omitted and the idle speed control is now carried out via a throttle valve bypass and a turbulence system. 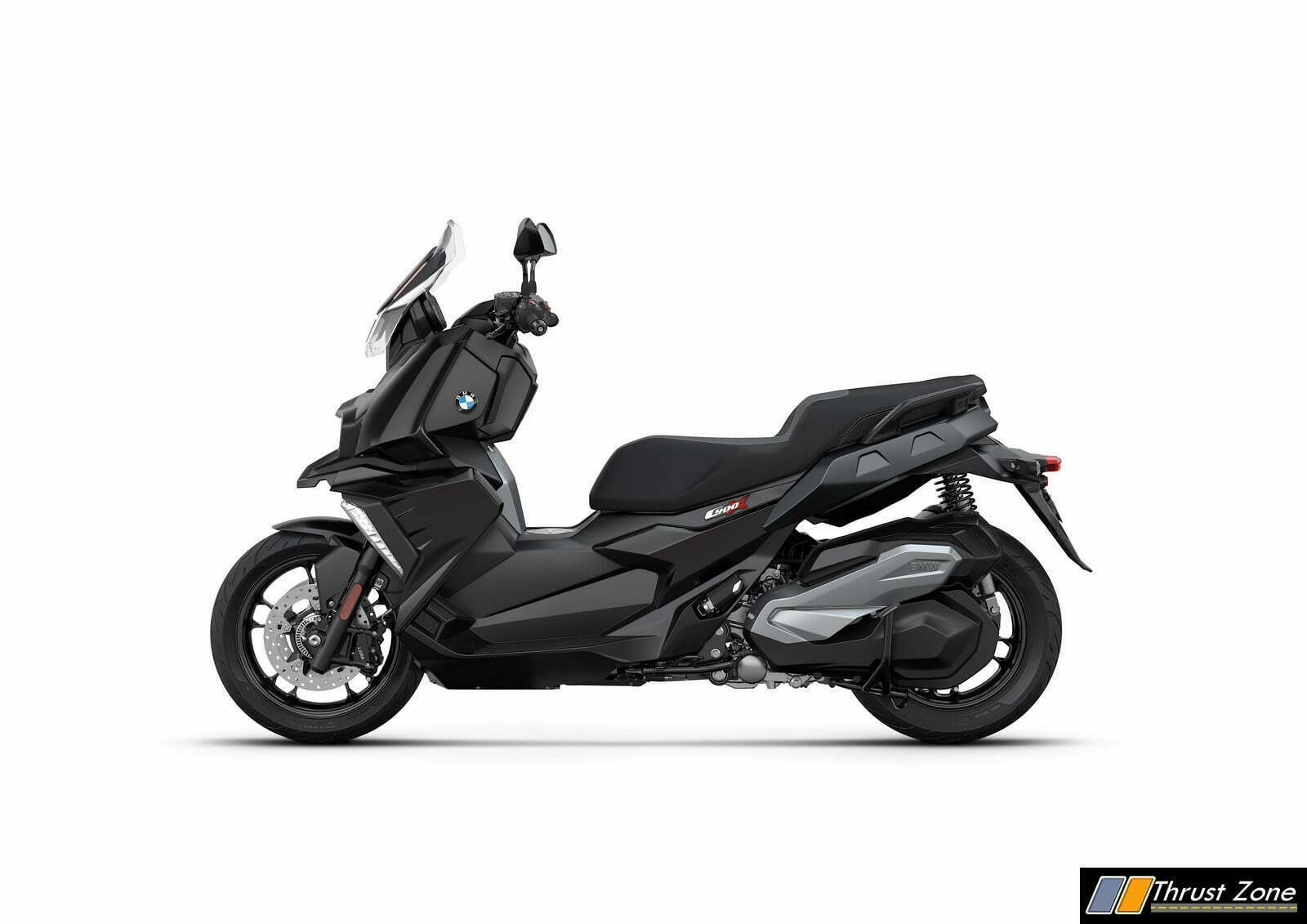 In addition to complying with EU-5 homologation, the revised drive impresses riders above all with an even smoother and more sensitive throttle response as well as increased idling stability. In addition to E-gas and new engine management, the optimised springs for the centrifugal clutch also contribute to increasing engine running stability. The tolerance of the spring force was limited, the spring force was slightly increased and the engine speed was slightly raised as the clutch re-engages. Due to the reduced tolerances, the spread of the speed when disengaging the clutch is smaller and belated opening of the clutch – as occasionally known from the predecessor – no longer occurs.

In the course of the technical revision, the new C 400 X and C 400 GT also received an optimised ASC. Instead of the previous manual recalibration – for example when changing tyres – the new system now has an automatic radius calibration. In addition, the new ASC is designed for significantly lower friction values than before. When riding, this is noticeable in a more sensitive response and significantly increased regulation comfort – especially on wet and slippery surfaces. Deactivating ASC is now no longer necessary.

Until now, the two vehicles were homologated for the Chinese market for a speed of 129 km/h. The legal requirements in China have changed and so it has now become possible to homologate the full top speed of 139 km/h there as in the other markets. Brake system with new front brake calipers and adjusted lever travel of front and rear brakes. Storage compartment with optimised lighting and USB charging socket.

The brake system of the new C 400 X and C 400 GT has also been revised. Thanks to new brake calipers, the double-disc brake system at the front now offers a more stable and clearly defined pressure point as well as improved roll-back behaviour of the brake pistons. This is accompanied by aligned lever travels for the rear brake on the left and the front brake on the right for a symmetrical braking feel.

The optimised lighting of the storage compartment (volume 31 l, 45 l with Flexcase) under the seat bench improves comfort significantly. The lighting now no longer comes from the side, but from above for even better illumination. In addition to the 12-volt onboard socket, the front right storage compartment is now equipped with a USB charging socket.