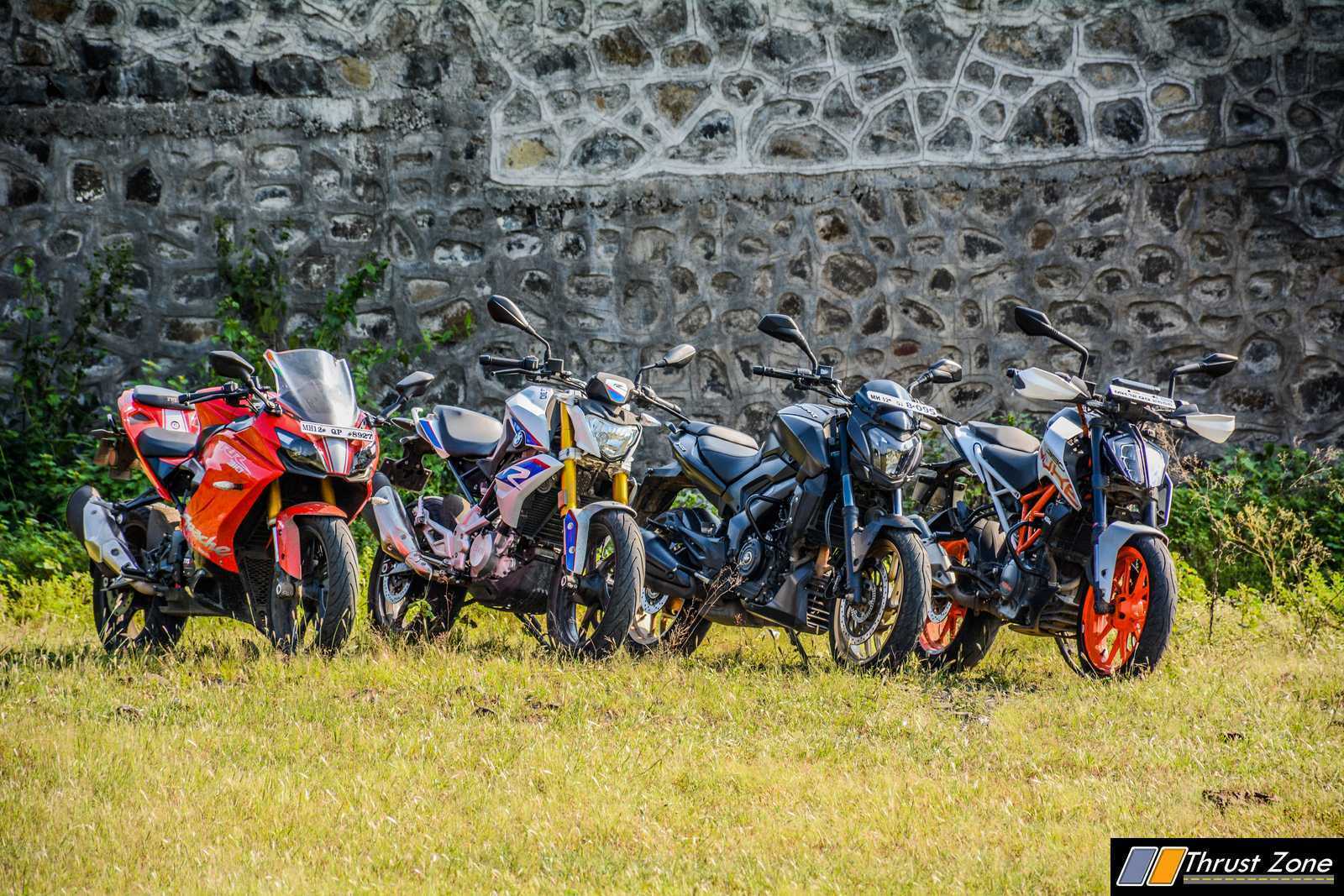 BMW G310R vs Duke 390 vs Dominar 400 vs Apache RR310 Review – Comparison -Shootout: The comparison of the best middleweights in the country

BMW G310R, it needs no introduction despite the fact the launch was done just three months ago. The naked motorcycle from BMW is made in India at TVS’s factory. TVS made its own version called the Apache RR310. KTM and Bajaj also had a similar pact. They made the Duke 390 together and now there is the Dominar 400 based on it. We got all twins from different mothers together for a showdown. We rode all these bikes back to back and we have road tested them in the past. Now, we get them together to give you the verdict on which is the real deal here. Which is the best bike in every regard? Let’s begin with the single-cylinder, European-Indian, 300-400cc BMW G310R vs Duke 390 vs Dominar 400 vs Apache RR310 shootout! 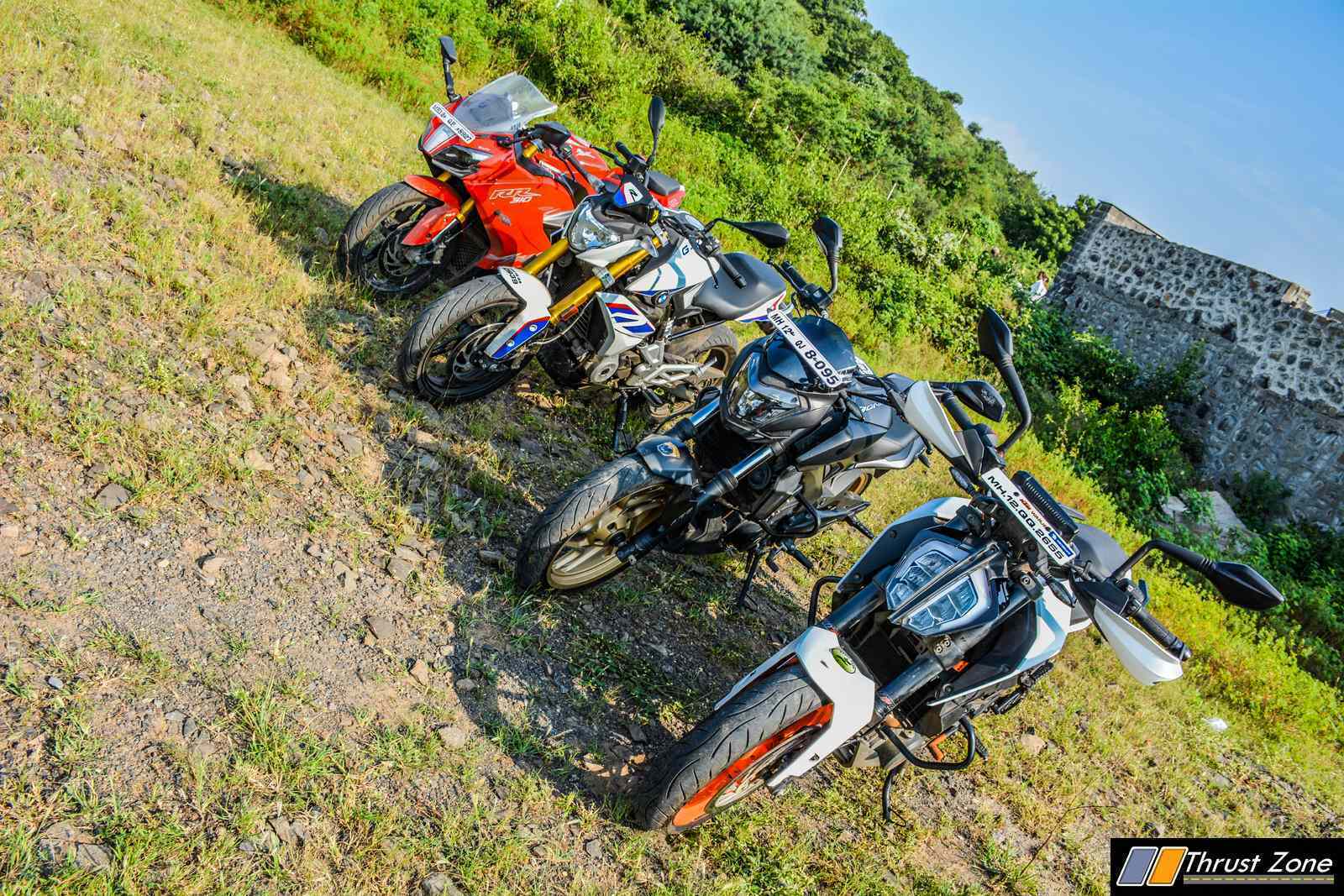 Design wise, the BMW G310R comes last. Sure BMW livery is great on the bike but everything on the bike looks from a generation behind. There isn’t anything special about this bike. This design philosophy is great for big bikes, small bikes like this, made for Asian markets need to be more chic, which this isn’t. You can call this sophisticated and timeless, but we don’ think when compared to the competition you can say all these things. Dominar, Duke 390 and Apache RR310 are lookers individually and in their segment. 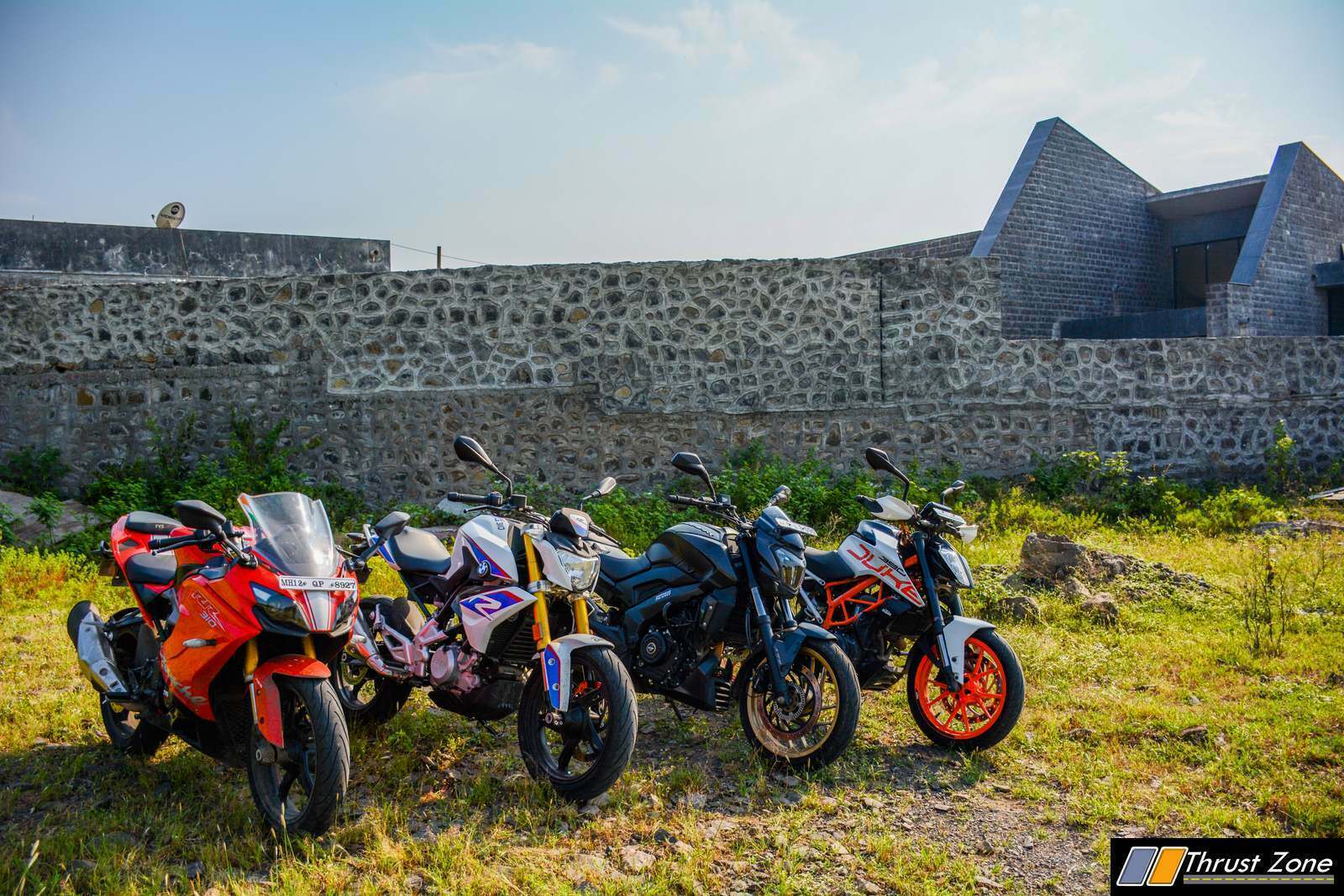 RR310 is, in short, a mini and affordable Ducati Panigale. The Dominar is the Ducati Diavel and the Duke 390, is the Austrian bad boy which your mom told you to stay away from. All of them get great elements such as well shaped fuel tanks, great set of head and tail-lamps and flashy wheels for the KTM-Bajaj twins. Overall, we think its a tie between the Duke, Apache and Dominar as they are great with their aesthetic part.

Quality wise, all bikes score high marks. Build quality is excellent, fit-finish is good and quality of plastics is great on all bikes. Dominar comes last in this test but still, the quality is far more superior than other premium bikes above and below its segment. Paint quality is excellent on all these bikes. Some use matt finish while others glossy, but they still look immaculately well-done paint jobs. 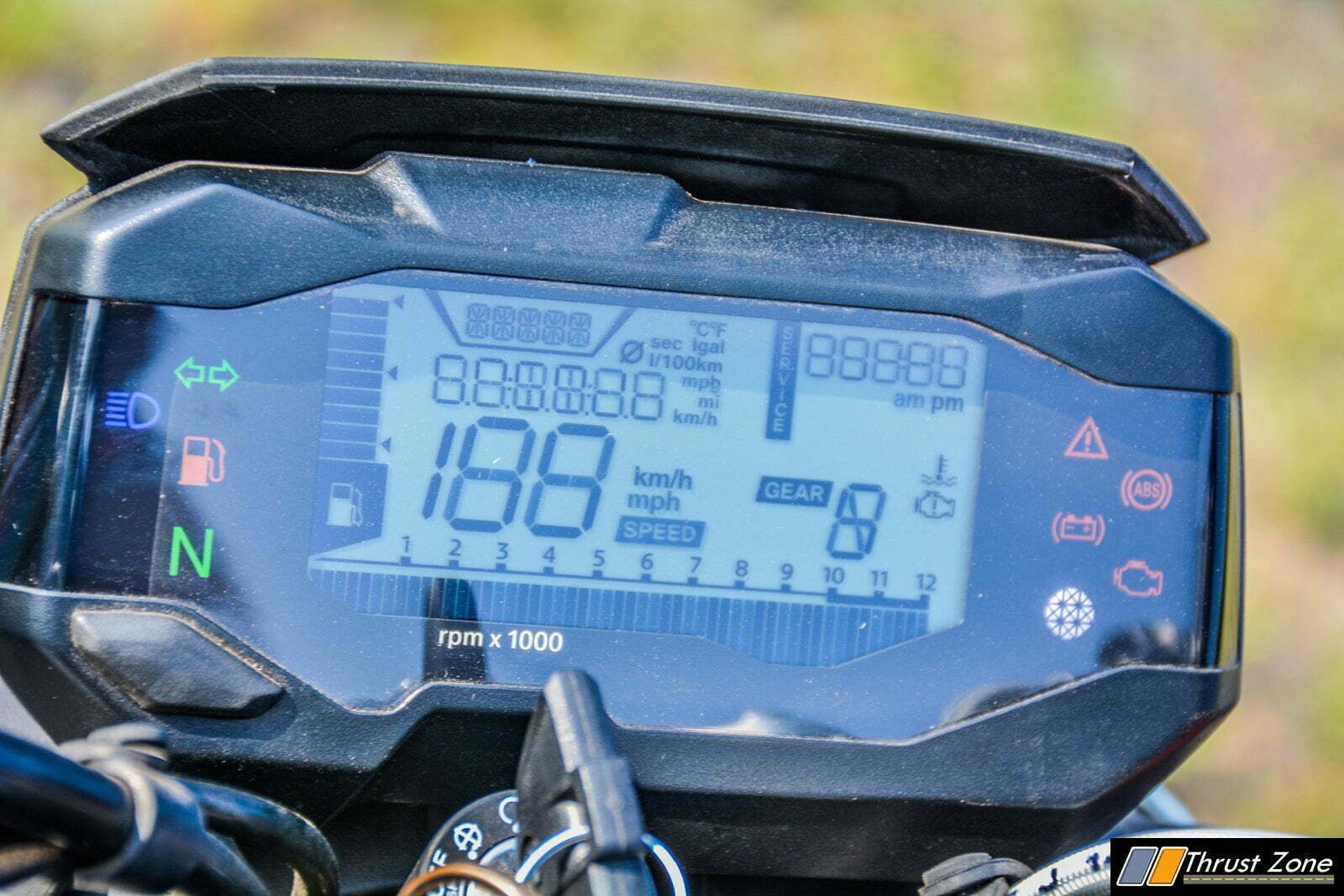 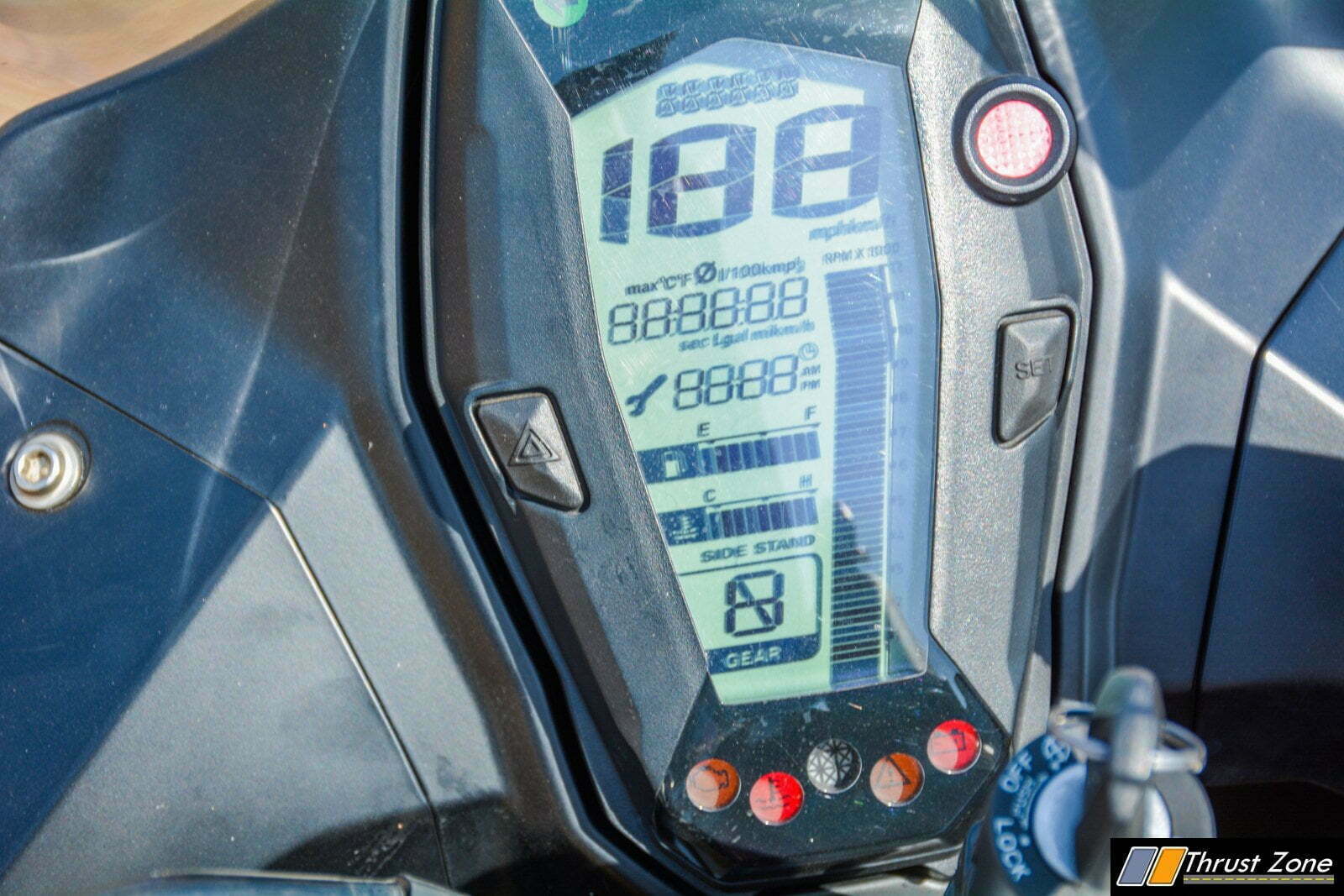 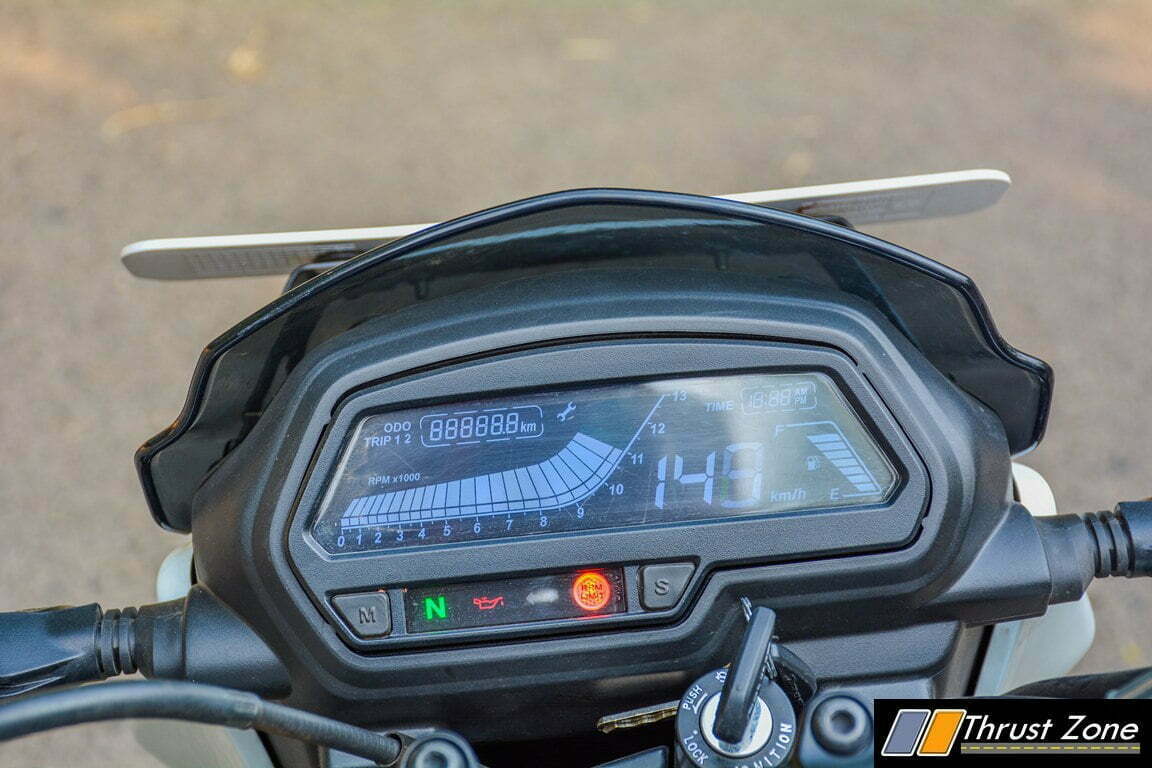 Feature list again, BMW G310R falls short. There isn’t a fully loaded instrument cluster except for basics. There are no LED headlamps, which Duke 390 and Dominar offer. Apache RR310 has dual projector lamps with HID lamps. Cluster on Duke 390 and Apache RR310 are closely matched. Fuel economy parameters, lap timers and much more is on offer on both machines. However, the color unit of the D390 is better and larger meanwhile the RR310 is not a color unit and is a vertical can be a little cumbersome to go through the cluster itself. Duke 390 cluster also is confusing with a variety of options and menus to choose from. Dominar falls last as it covers basics and nothing more.

Ergonomically, all bikes offer comfortable riding position for short and long distance touring. All of them are sporty as there is some amount of reach to the handlebar from the seats. All have rear set pegs. BMW and Apache lack legroom for taller riders. Meanwhile, the Dominar and Duke are very accommodating in that area. Seat on the Apache RR310 is thin, but rest bikes are really good on comfort. Mirrors mounted on all four bikes is good enough, but the BMW twins have vibrations and so does the Dominar to a certain extent. The Duke 390 mirrors don’t suffer from this issue. Grab rail on all bikes makes it easy for pillion, except for the RR310, which again isn’t pillion friendly. 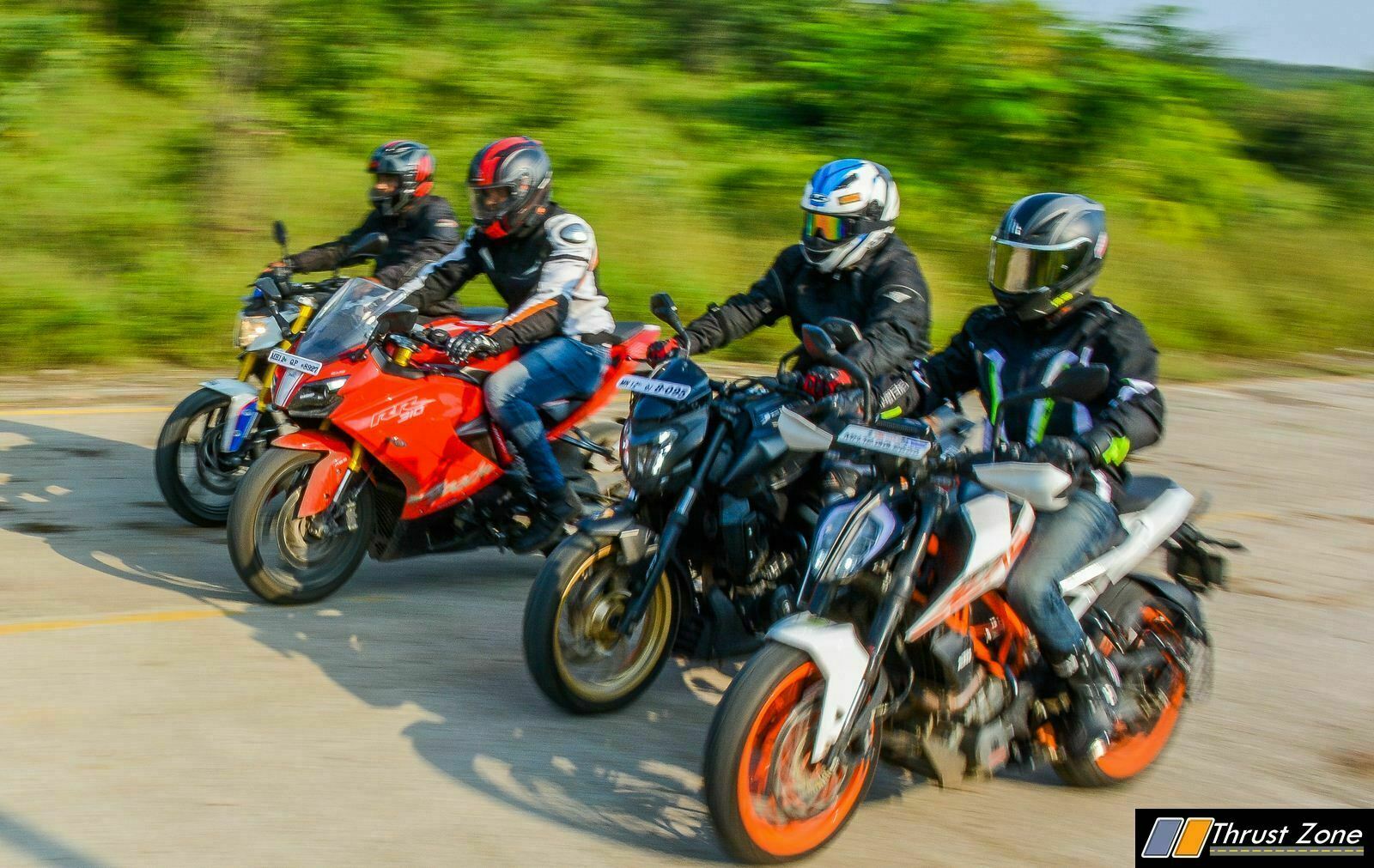 When it comes to riding these bikes, let’s discuss city rideability. The gearbox and clutch on the BMW twins can be moody and hard respectively. The same on the Duke and Dominar are light and precise. Lack of slipper clutch is one of the main reason on the BMW twins and not the KTM Twins which have them. All engines are free revving and there is hardly heat from them. Vibrations are present on all three bikes except for the Duke 390. The vibrations can be felt on pegs, handlebar and the fuel tank around the 5000-6000 RPM on Dominar, Apache And BMW G310R. 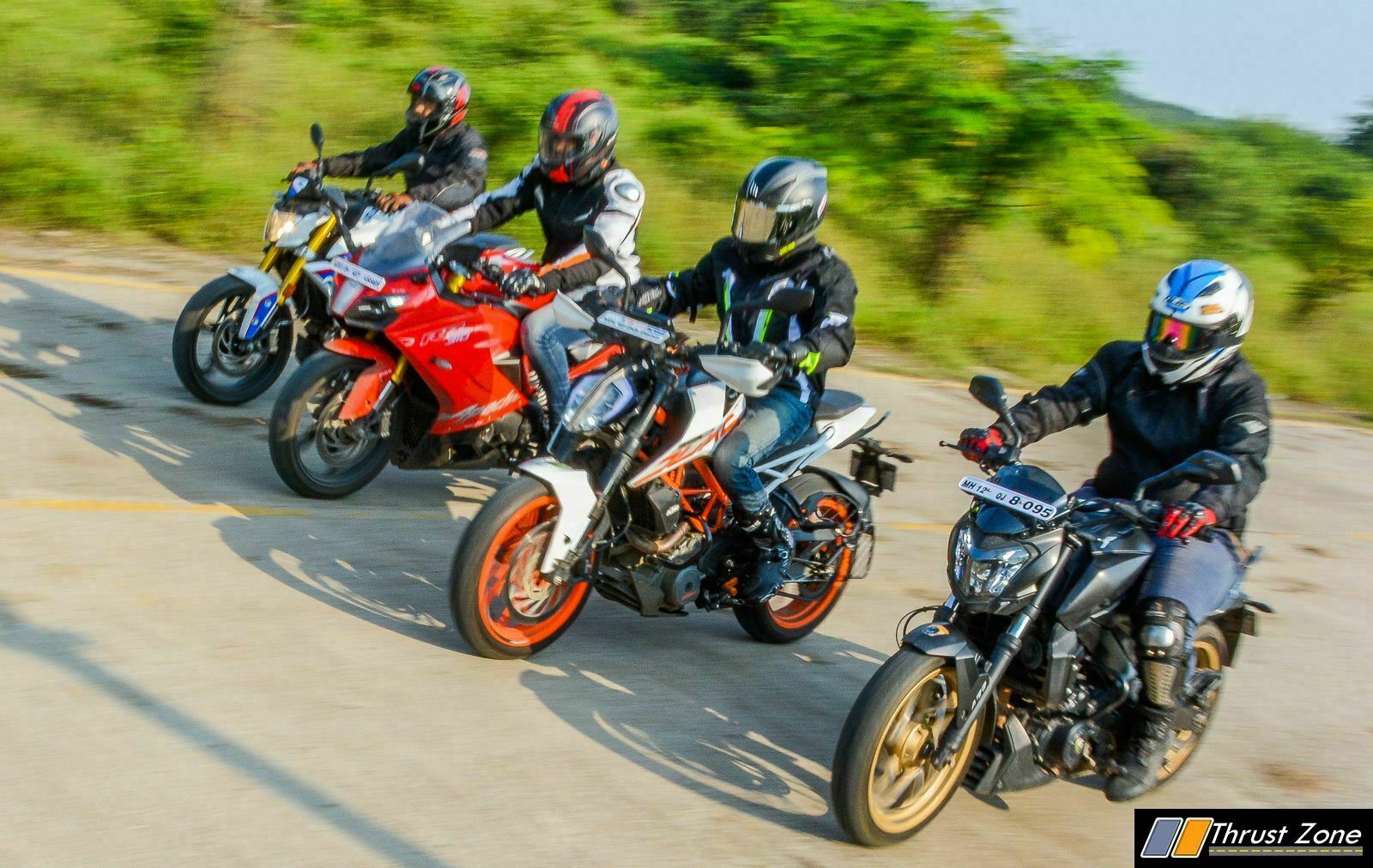 The problem with the BMW twins are that the motor feels partially industrial with not so smooth engines. The lack of low-end and top-end grunt leaves the BMW twins with only mid-range which makes it irritating to ride at times. Dominar, on the other hand, has a flat torque curve which gives it power everywhere, within the limited power band of 2000 RPM to 7000 RPM. 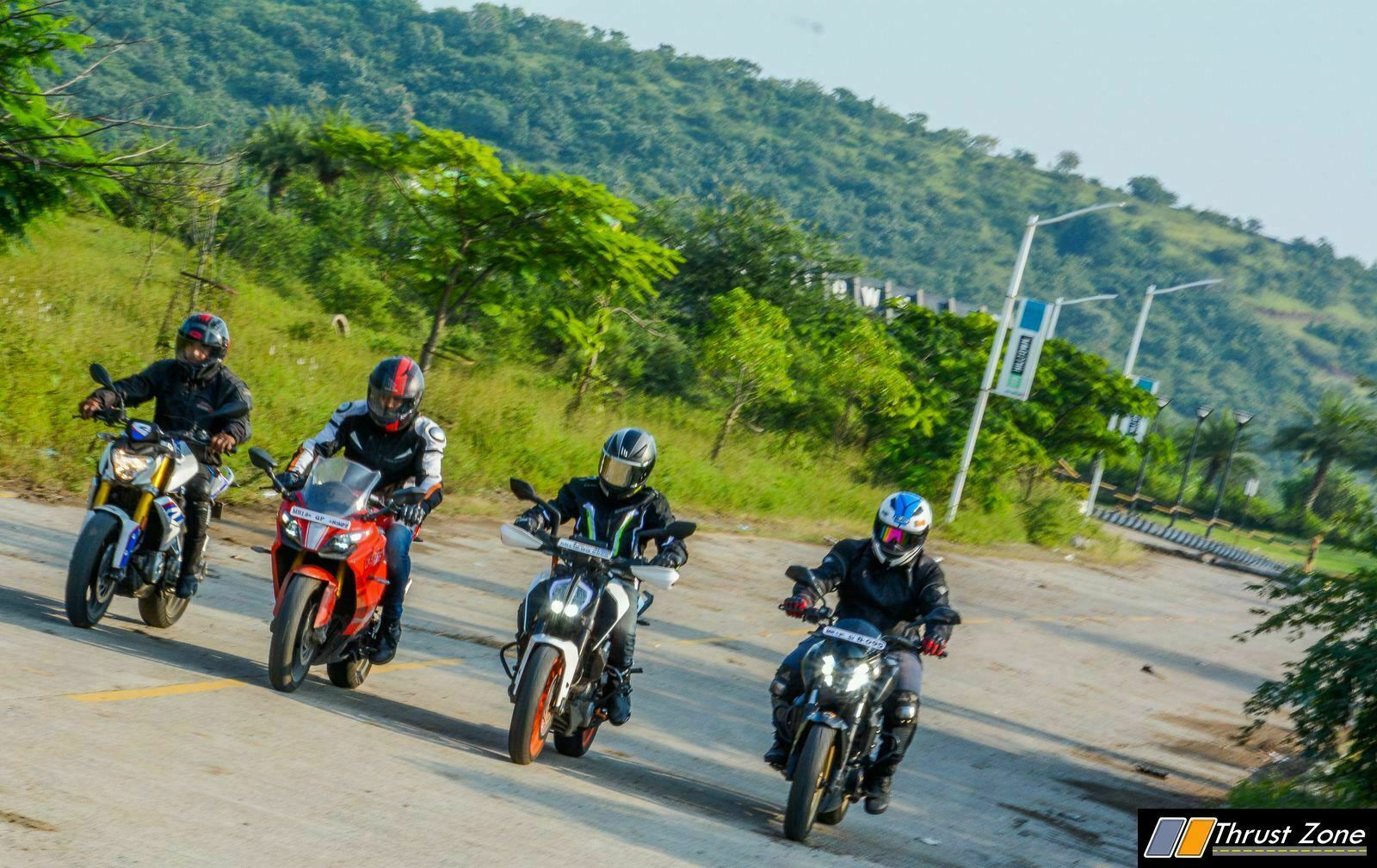 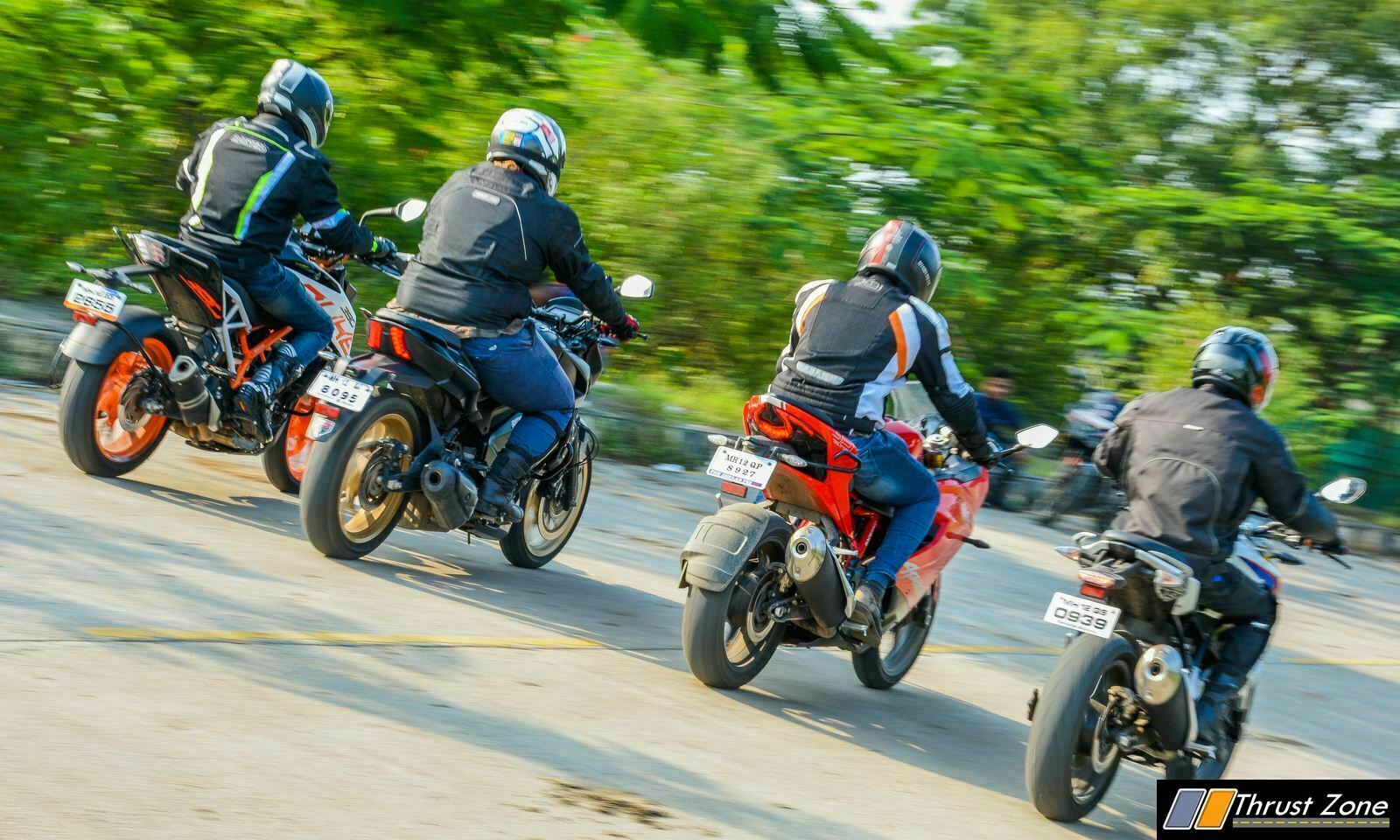 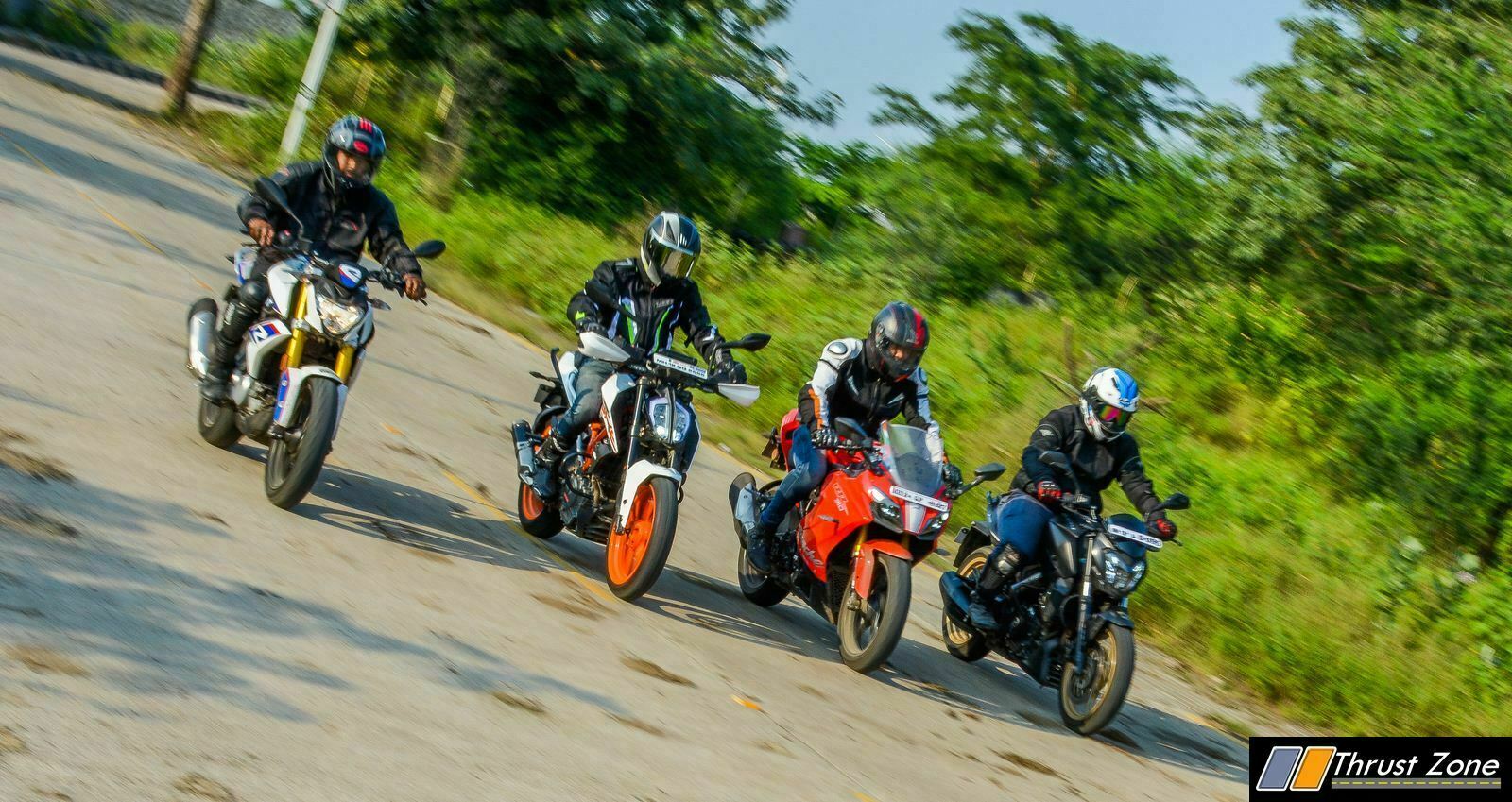 To be specific here, it is the BMW G310R only place of excellence and that are dynamics. The ride quality is fantastic, it feels very confident any given speed and turns-in quickly, easily and has good amount of grip despite mediocre Michelin tyres which we are on long term testing right now on our Duke 390. Dominar feels very similar to the BMW G310R, but it does that while feeling heavier. 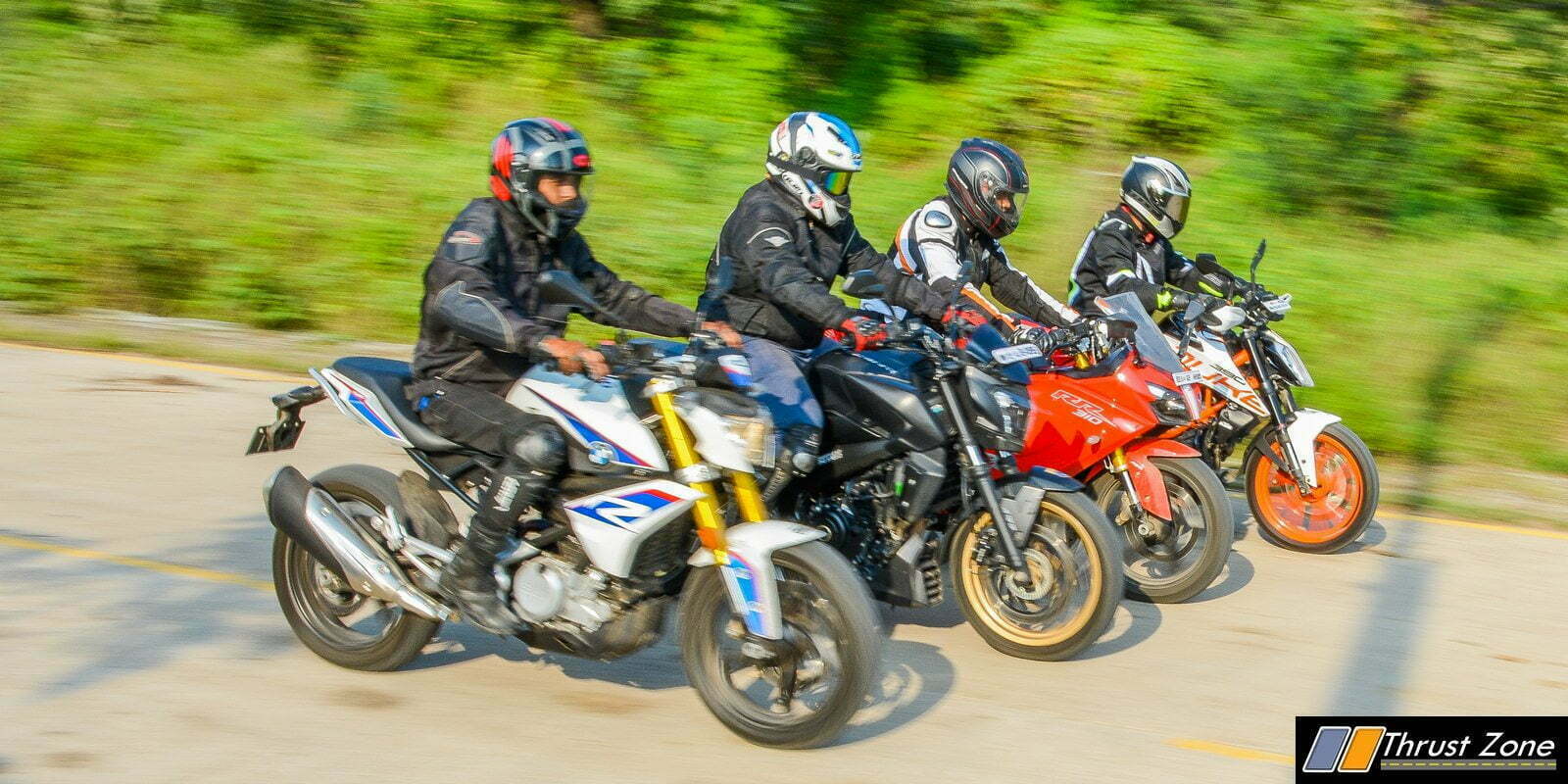 Ride quality on the Dominar is good, but the rear is very stiff for anyone’s liking. Front geometry is good, MRF tyres are great and it turns-in rather quickly for its size and weight. Apache RR130 is similar to the BMW G310R, but does everything with a little more feedback as both bikes continue with splendid dynamics. High-speed stability on all these three bikes is good without a doubt. Brakes which lack initial feel, but post that, have great braking performance on the BMW twins.

Duke 390 with a bit more suspension travel provides fantastic agility, stability and suspension is calibrated well for our roads now it is a bit more hoot to ride given the fact it makes a good amount of more power than its rivals. Fantastic brakes and Metzeler tyres with superb bite and backed by switchable ABS means you can lock rear brakes when you want to and have fun as well. Trellis frame on all three bikes and perimeter frame on the Dominar 400 are quite simply set benchmark for bikes to come in this segment. Fun fact, all four bikes use same 110x70x17 section tyre at the front and 150x60x17 tyre at the rear. 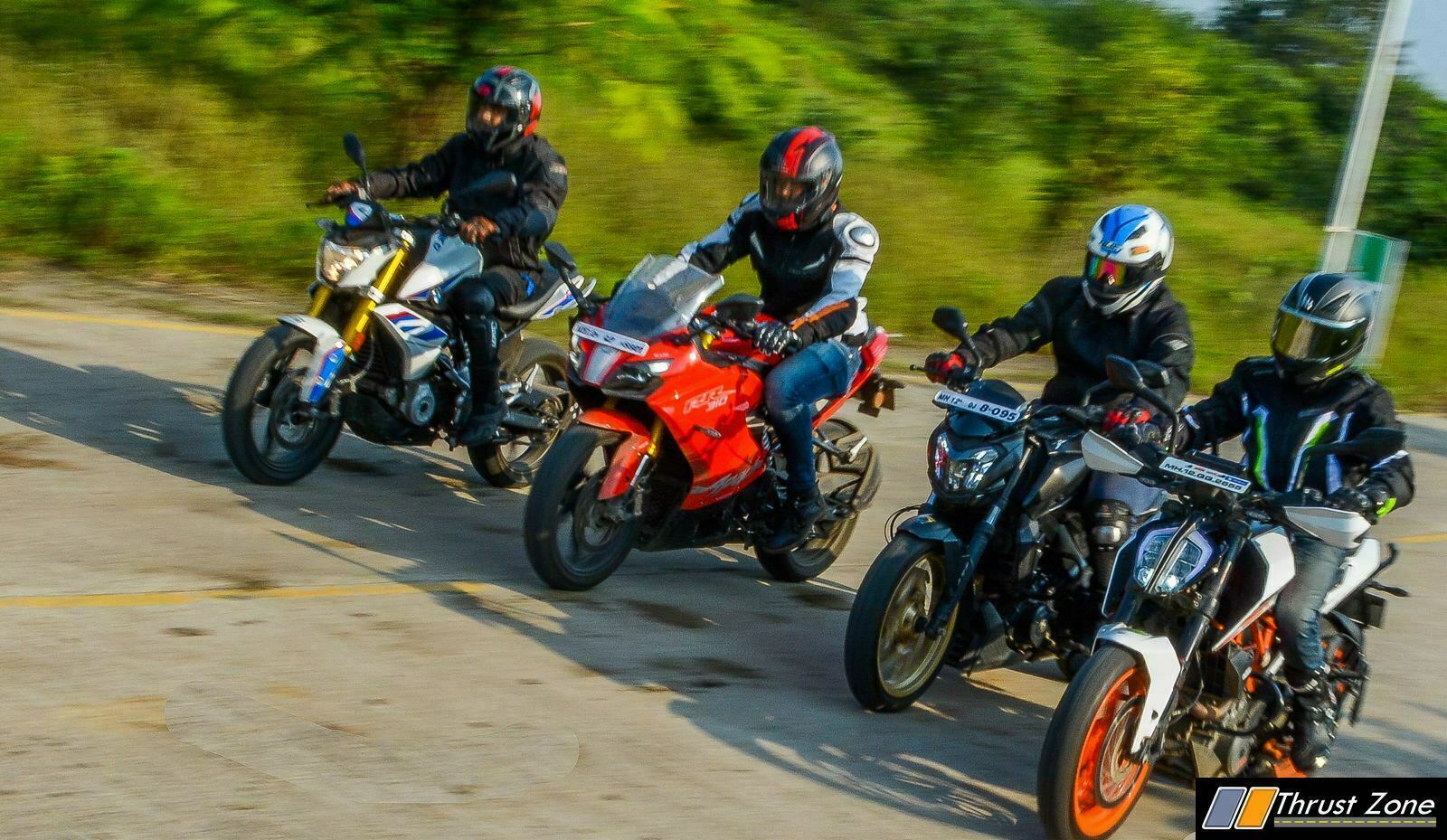 Note Before you jump to the verdict asking where is the Ninja 300 and Duke 250 is, well, we tried to keep the comparison to single-cylinders only. The Duke 250 wasn’t there in this test because it will be updated very shortly and it was included in our other test. Link Below. 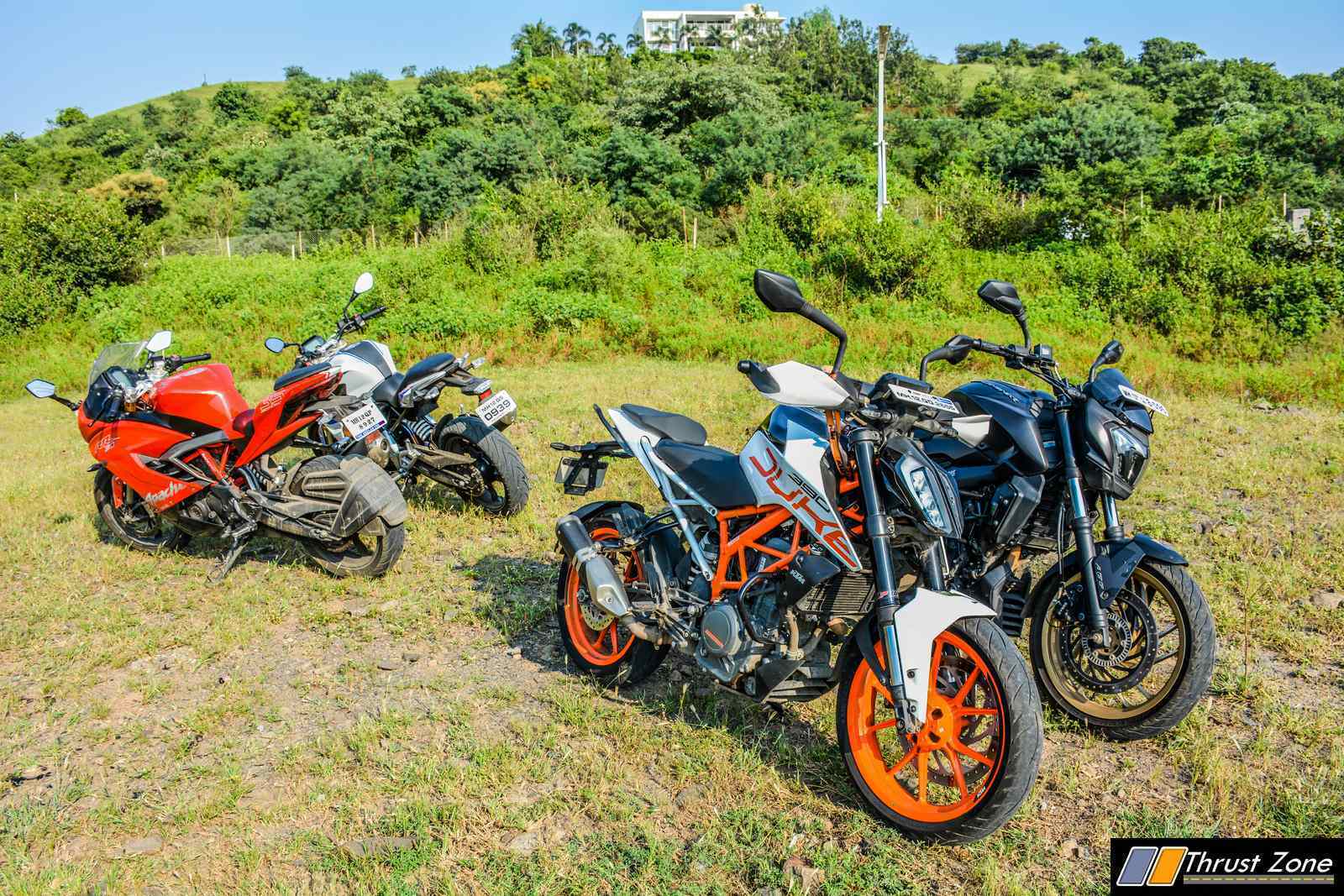 The BMW G310R marks an entry for the brand into the single-cylinder thumper, newbie motorcyclist world. But, the pricing is way to off the charts and it is nowhere close to providing value or stupendous performance against its rivals. It is going to be a bike for a guy who doesn’t want much performance in the segment, loves a bike which is easy to ride and need some bragging rights for his first bike, which the BMW badge gets him. 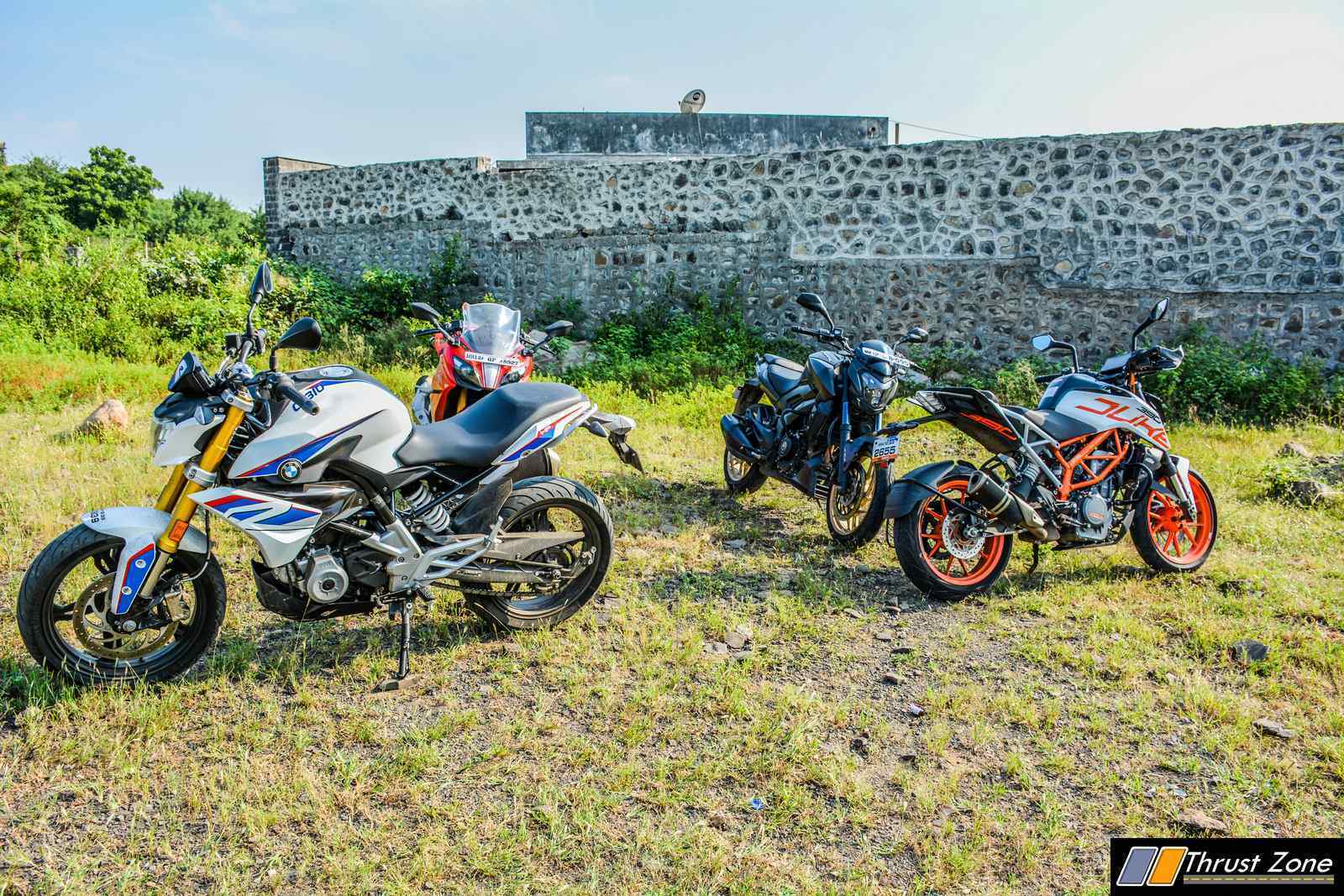 BMW it is then, only if he wants to pay Rs 2.0 lakhs more over the Dominar which gets him the almost identical traits. Not, the Dominar? Alright, The Apache RR310 also makes a fantastic case, it even looks good and has the same quality and at Rs. 1.5 lakh less. If you are enthusiast you know that the Duke 390 gets all of this and you still pay one lakh less. All of this makes the Duke 390 winner of this test while the BMW will have to continue to work its way out.

Possibility: Buy A Ducati, Become A Vlogger – Here is How!