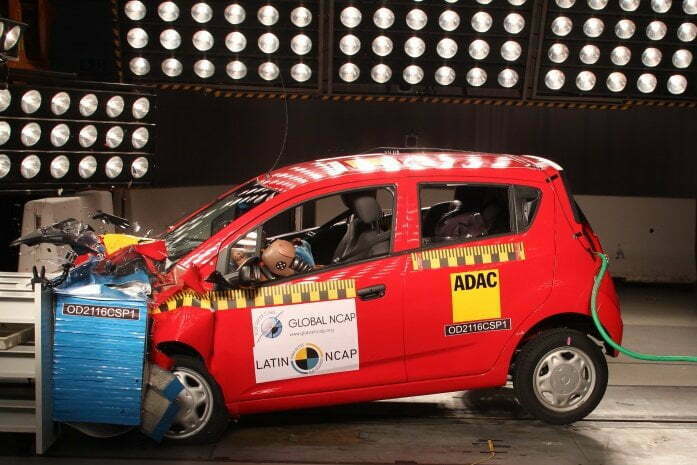 Chevrolet cars have been known for the safety that it has offered in the past. The news comes a shocker as the more stringent test of Global NCAP says that the Beat doesn’t score full marks this time. The variant tested last time back in 2009, was equipped with four airbags along with ABS and EBD. Latin NCAP picked up the base variant in their country.

Since it isn’t equipped with airbags and ABS it did not score high this time. However, structure has been rated safe and there is no penetration post A-Pillar. The most keen aspect that determines a structure can be easily seen in the video being unharmed. The fault here is that the car doesn’t come equipped with airbags and has improper instruction for Child Restraint System installation has resulted in this fact.

General Motors in South America is in trouble result to crash test results just before this incident as well. Earlier in 2016 itself when Global NCAP sent a letter to company CEO, Mary Barra asking for strict safety guidelines for safety improvements in their cars. GM committed to plans increase spending by $5 billion to improve cars sold in Latin America.

This was done by including two airbags and three-point seat belts for all occupants as a standard feature. Something India is also set to make a rule in the year 2018. Rest assured most reports confirm that the car should continue to be safe with airbags variants that are usually found on the highest spec variant. India Beat too doesn’t get Airbags and ABS as standard on base and middle variants and is an option on the top-end variant itself. New generation Beat set to come to the Indian market by late 2017 should solve this problem as it will become the law.

VS 400 Will Not Be A Pulsar, New Brand Coming to Fight Royal Enfield