Dochaki Arya Is A Royal Enfield Based Motorcycle That is Quintessentially British! 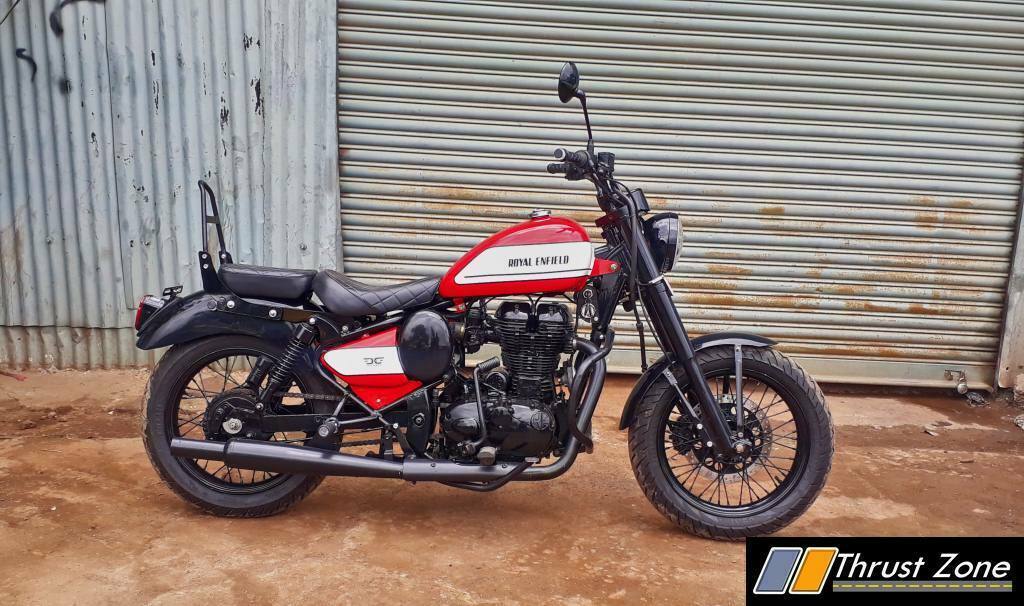 Royal Enfield bikes have been one of those versatile motorcycles that can be put under extensive makeover and will come out all fresh, spick and span. Let alone global aftermarket workshops, India itself has several chop-shop junkies, who can literally tailor design aftermarket parts for cosmetic upgrades on your bike.

Today we have Arya- An old school cruiser that started its early life as a Royal Enfield bike and eventually landed at Dochaki Custom Motorcycles- Pune based custom motorcycle workshop. I really hope this rings a bell right now, if it doesn’t, break no sweat. Scroll back to the home page once you are done reading this piece, and you will stumble across another custom Royal Enfield article that we’ve covered earlier. Hint- The bike’s called Draga.

Arya is the brainchild to the team at Dochaki Custom Motorcycles and is rather one of its kind. The bike has received a substantial number of cosmetic upgrades and looks nothing like a Royal Enfield. Front to back left to right, every visible piece has altered dimensions or is completely replaced with a new part. Let’s dig deeper into what contributes to this stonker creation.

Starting up-front, Arya gets a modern-day LED headlamp making sure the road illumination ahead is just right. The turn indicators are mounted on the front shocks, nothing that looks hindersome, rather adds up to the functionality. Moving towards the fender we see its shortened to a notable extent and the rims have been bumped up in size with larger tyres shoed on. All these changes just add up to the visuals and have nothing to do with the performance.

Moving towards the handle-bar, it has been downsized in length and adds to the riding stance keeping comfort on top with small LED blinkers at both the tips of the bar. The switches, levers, mirrors are all stock. The fuel tank has been redesigned and wears the appearance of a peanut. The rear fender has also been chopped off a bit just like the front fender and adds up to the appearance.

The split seats get Diamond stitching pattern all over and a sissy bar has been added for extra comfort of the pillion. The bike is covered in a two-tone Red and White paint scheme with an all-black base. Amidst all the custom work, the heart of the matter is an all-stock Royal Enfield engine with an aftermarket exhaust that’s commonly seen and the bike sits on a Royal Enfield chassis.

Now, Make Your Own Royal Enfield – Know All The Details