Dominar Faces Toughest Challenge As It Conquers 15,600 kms Without Any Breakdown 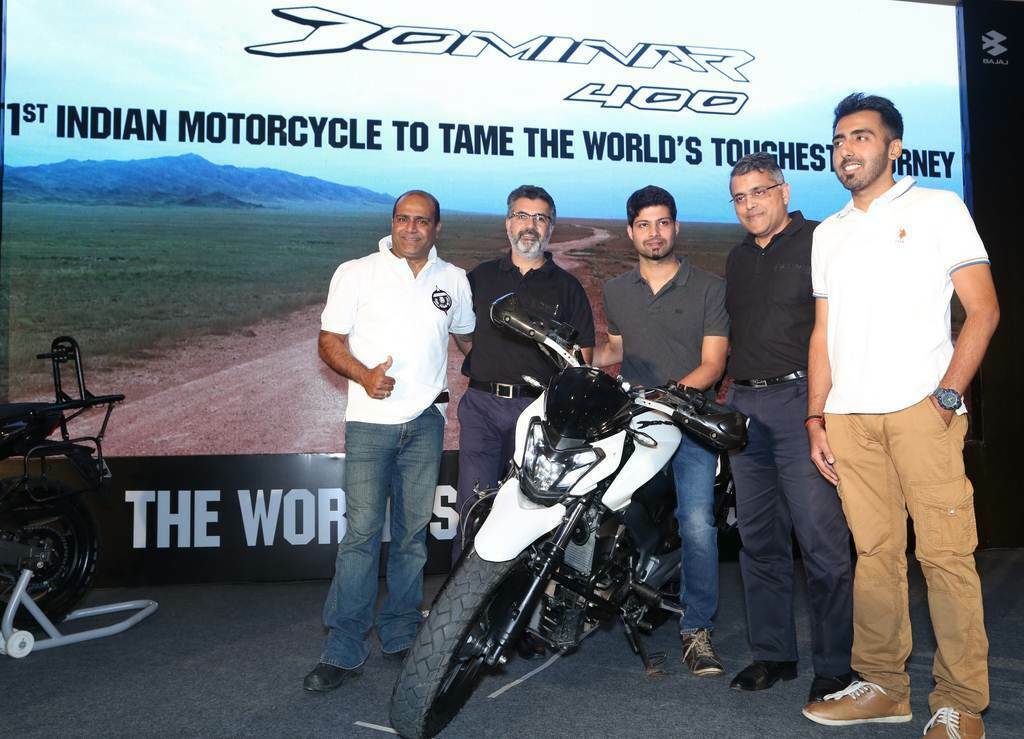 Bajaj Dominar 400 has created history by becoming the 1st Indian bike to conquer the world’s toughest journey – The Trans Siberian Odyssey. The journey spanned over 53 days traversing about 15,600 km across 6 countries, Uzbekistan, Tajikistan, Kyrgyzstan, Kazakhstan, Russia, Mongolia and back into Russia. This translates in to nearly 390 km of hyper-riding every day across all kinds of terrain i.e. high altitude passes, grasslands, river beds, sand, rocky terrains, dirt trails, steep gradients, loose gravel, and harsh extreme temperatures. All without any service support or back-up.

Dominar 400 scaled some of the world’s most difficult of terrains on this Trans-Siberian Odyssey including more than 3000 km being covered on the famous Stalin era Road of Bones. It also became the only Indian bike to tame Charyn Canyon also known as little brother of Great Canyon, which features a sheer drop of over 100 meters at a 45 degree incline.

The challenge was taken up by 3 passionate and experienced riders – Deepak Kamath, Dilip Bhat and Sudhir Prasad. Deepak Kamath has been riding for over 21 years now and has a record in his name for the Continental Raid. Dilip started touring early at an age of 20 and has never looked back. Sudhir is a Motoholic and has started touring since 2009.
These 3 Hyper Riders who made this mission possible were felicitated today in Mumbai by Bajaj Auto for their outstanding spirit and achievement.

Speaking on the occasion of the milestone achievement, Mr. Eric Vas, President – Motorcycle Business, Bajaj Auto Ltd, said, “Dominar 400 has redefined the long-distance riding. While riding to Leh & Ladakh during the three months of summer is considered to be the touring benchmark in India, the Dominar 400 allows motorcyclists to raise the bar to altogether another level.

The fact that the grueling Trans-Siberian Odyssey was completed using stock Dominars without any major part change or breakdown is testimony to the superior design, quality and technology of the Dominar 400”

He added, “We are here to celebrate this milestone achieved by hyper-riders Deepak Kamath, Dilip Bhat, Sudhir Prasad and their Dominars. Covering an average of 390 km every day for 53 straight days across the most varied and toughest of terrains with no service back-up, is a commendable motorcycling feat that speaks volumes about the grit, determination and toughness of both the hyper-riders and their Dominars.”

The 3 Dominars which have completed the Trans-Siberian Odyssey and the riders will now embark upon a victory tour across the country and stop at 10 key metro cities. They will visit Bajaj Auto dealerships where fellow Dominar owners can meet them, learn from their experiences and even ride with them.

Key Details of the Trans-Siberian Odyssey:

Leg 1: Uzbekistan – Tajikistan – Kyrgyzstan : 1600 km
Pamir highway, Second-highest altitude highway in world known as ‘Road from Hell’, Unpaved treacherous roads. Temperature around 3 degrees.
A section of the historical old silk route, this is known as the Pamir Highway. Over 1600 km in length, the road is mostly an unpaved and un-asphalted surface of gravel and sand. The road is damaged and in dreadful condition in places because of erosion, earthquakes, landslides, and avalanches. The Pamir Highway is the second-highest altitude international highway in the world and is sometimes referred to as “The Road from Hell”. The Pamir highway is mostly one-lane and goes along deep valley with no barriers between the road and the cliff. Any riding mistake can have a deadly consequence.

Leg 2: Kyrgyzstan – Kazakhstan: 2400 km
Mountainous terrain and high altitude passes, treacherous hair pinned roads.
Kyrgyzstan is a high mountain and land locked country. Over 90% of the country is mountainous terrain and involves crossing many a mountain passes at dangerous inclines. The road also boasts of some of the most beautiful lakes that include Song Kul Lake and Issyk Kul Lake. Krygyzstan also has one of the most famous hair pinned roads in the world.

Leg 3: Kazakhstan – Russia: 1980 km
Mountainous terrain, Charyn Canyon, Steep gradient of 100 feet with 45-degree incline, High speed roads.
This section has the famous Charyn Canyon which is considered in-accessible to normal vehicles due to a sheer drop of over 100 feet with a 45-degree incline, two wheelers are banned from entering into this canyon. There is no scope of return if any bike falters in this section. Dominar became the first bike to conquer the Charyn Canyon while travelling from Kazakhstan into Western Russia. This section had some of the most beautiful high speed roads in the world. Over 1980 km of sustained high speed cruising with speeds in excess of 120 km per hour is a rider’s delight. The journey touches Sarkand and Semey before entering Russian at Barnoul.

Leg 4: Russia – Mongolia – Russia: 3440 km
Traverse through Alta-Krai region, High speed roads, desolate, un-inhabited lands of Mongolia & Russia.
Gateway to the real adventure begins here as the bikes made their way in Russia passing the beautiful Alta-Krai region. The journey covered travelling through the vast open lands of Russia & Mongolia. The highlight of this 3400 km journey was scaling up a massive hillock to oversee lake Gusinoye, just ahead of the Mongolian border. The riding was through long stretches with no signs of people or support making it very precarious.

Leg 5: Russia – Kolyma Highway : 4600 km
M 56 Kolyma highway, All weather gravel road, pinnacle of long distance riding.
These section included the Road of Bones – Kolyma Highway. The Kolyma Highway is also known as the Road of Bones, because the skeletons of the forced laborers who died during its construction were used in many of its foundations. The road is treated as a memorial and is now a frequently maintained all weather gravel road. The journey has mixed punishing terrain and connects Skovorodino to Kyubeme, it is considered to be the pinnacle of adventure, for riders and drivers alike.

Leg 6: Russia – The Road of Bones – The Old Summer Route :1580 km.
Challenge for adventure motorcyclists, washed-out bridges, streams, harsh freezing weather conditions. The ultimate 1580 km of the journey has a 420 km section via Tomtor which is largely unmaintained and completely abandoned. This section is known as the Old Summer Route and remains one of the greatest challenges for adventure motorcyclists. With a surface of compacted gravel or clay, the old summer road is in a state of dis-repair with washed out bridges and roads reclaimed by streams. The road is a torture test for the bikers and the bike. There is no clear record of any adventure motorcyclists having accomplished this route without assistance (back up support vehicle). The Bajaj Dominars have become the 1st Indian bikes to reach Tomtor. 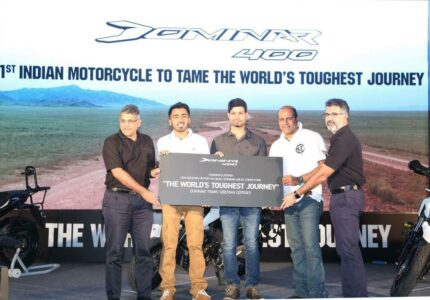 About the Riders
Deepak Kamath
A rider since the age 19, this isn’t Deepak’s first dance. He is an all-out explorer with numerous national adventures across India. A holder of multiple records including a World Record for circumnavigating the world, Deepak has lived his passion for adventure touring through multiple rides across India and Nepal.

SUDHIR PRASAD
Describing himself as a Motoholic, Sudhir is one of India’s most upcoming adventure riders having participated in multiple national riding competitions since ’09 and is one of the 10 finalists of the Wrangler True Wanderer 4.0 competition. He’s completed hyperrides through Ladakh, the treacherous trails of Spiti, Himachal Pradesh, Bhutan and the frigid roads from Kishtwar to Killar through Pangi Valley.

DILIP BHAT
Always longing for an opportunity to hit the roads, Dilip is a hardcore petrolhead.
He started at the age of 20 and has never looked back since. He’s completed multiple rallies across all 4 corners of the country and then some. Dilip has also successfully covered the deadly roads from Kishtwar to Killar, through Pangi Valley similar to his riding partners.

Royal Enfield Interceptor 650 Is One Of The Twin Motorcycles! – REVEALED!