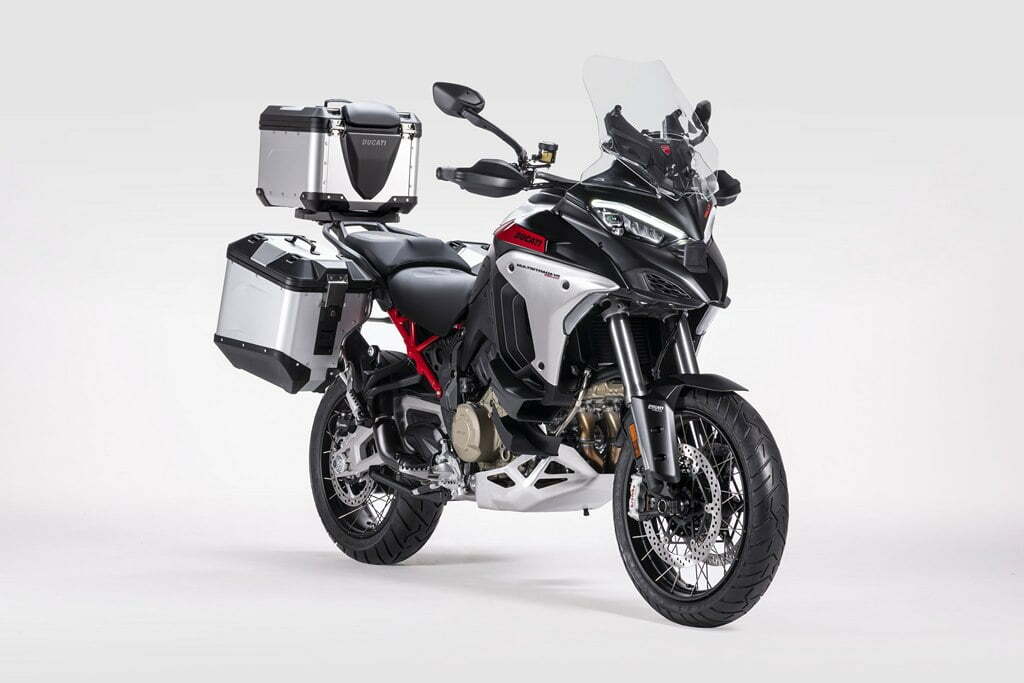 In the third episode of the 2023 Ducati World Première web series, the Bologna-based manufacturer presented the new Multistrada V4 Rally, the Ducati aimed at lovers of long journeys.

With the “Rally”, Ducati takes the globetrotter spirit of the Multistrada V4 to an even higher level, thanks to improved comfort for rider and passenger, a greater range and a more pronounced off-road aptitude . The result is a motorcycle that is in its element on dirt roads as well as in modern metropolises: the perfect choice for those who want to reach any destination with maximum comfort and safety, without sacrificing the typical Ducati riding emotions. As with the entire Multistrada V4 family, performance (170 hp), reliability and maintenance costs (intervals every 60,000 km and Oil Service every 15,000 km/24 months) are excellent.

Living up to its name, the “Rally” model of the Multistrada V4 is a bike that further improves its ability to rule all roads, especially unpaved ones. In fact, this Multistrada can count on semi-active suspensions with travel increased to 200 mm that guarantees a higher ground clearance, on a new Power Mode dedicated to off-roading, on wider rider footpegs with a more marked profile and removable rubber insert and on the Skyhook DSS EVO control strategy, even more precise and efficient. The Multistrada V4 Rally is also equipped with an Autoleveling function, which guarantees a constant trim when the rider, passenger and luggage configuration alters, in order to always keep the characteristics of the vehicle unchanged. Off-road aptitude increases with the Multistrada V4 Rally thanks also to standard lightened spoke rims and reinforced engine guards. 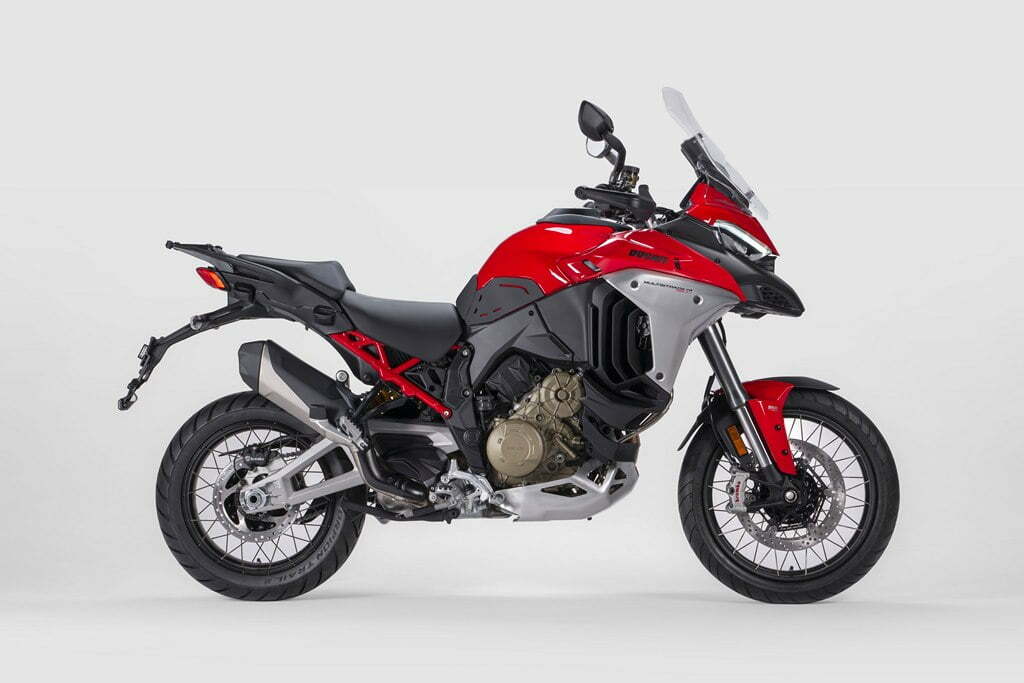 With the new 30-litre aluminium tank, which integrates harmoniously into the muscular and elegant shapes of the bike, it is possible to increase the distances that can be travelled between one refuelling stop and the next: the new Multistrada V4 Rally is ready to tackle even the most remote roads.

The Multistrada V4 Rally is the ideal bike for travelling as a couple and has been designed to take the comfort of the rider and travel companion to the highest level: in this sense the windshield has been redesigned (increased by 40 mm in height and 20 mm in width), the tail has been lengthened and the case attachment set back to offer more space in the leg area for the passenger, who can also count on footrests with larger rubber inserts to reduce the level of transmitted vibrations. Furthermore, thanks to the availability of saddles of different heights for both rider and passenger and the lowered suspension kit, the Multistrada V4 Rally can be customized to suit any rider and passenger combination. 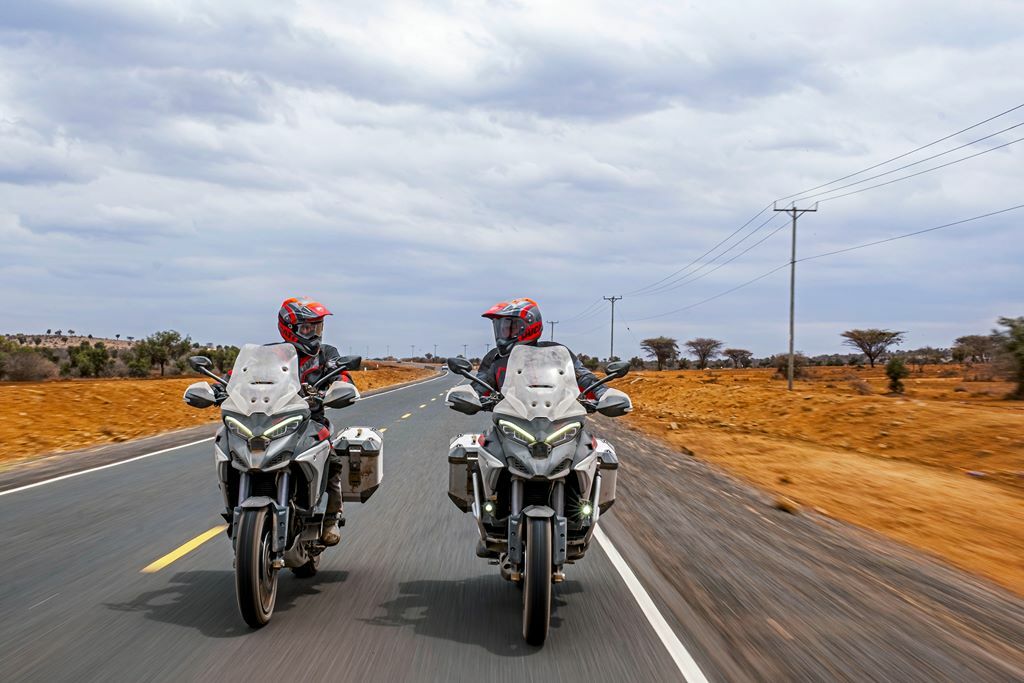 The Minimum Preload function , already introduced on the Multistrada V4 S in 2022, allows the rider to “lower” the bike when stopping and riding at low speed, by minimizing the preload of the shock absorber. The Multistrada V4 Rally takes a further step forward in terms of ease of use by introducing the Easy Lift function which, by opening the suspension hydraulics at key-on, reduces the effort required to lift the motorcycle from the side stand thanks to fork and shock absorber compression.
In addition, a center stand is standard on this bike to help with the loading and unloading of the side cases and to perform any maintenance items on long journeys away from home easier.

Ducati Multistrada family continues to be a benchmark from a technological and safety point of view also with the Rally model. The Multistrada V4 was the first motorcycle in the world equipped with a front and rear radar system to support the Adaptive Cruise Control (ACC), which make riding less tiring on long road sections, and Blind Spot Detection (BSD), which signals the presence of vehicles approaching in the blind corner of the mirrors.
The 6.5-inch TFT colour dashboard offers map navigation features thanks to the Ducati Connect application, which supports the use of a mobile phone to answer calls or listen to music, using a helmet equipped with an intercom system. 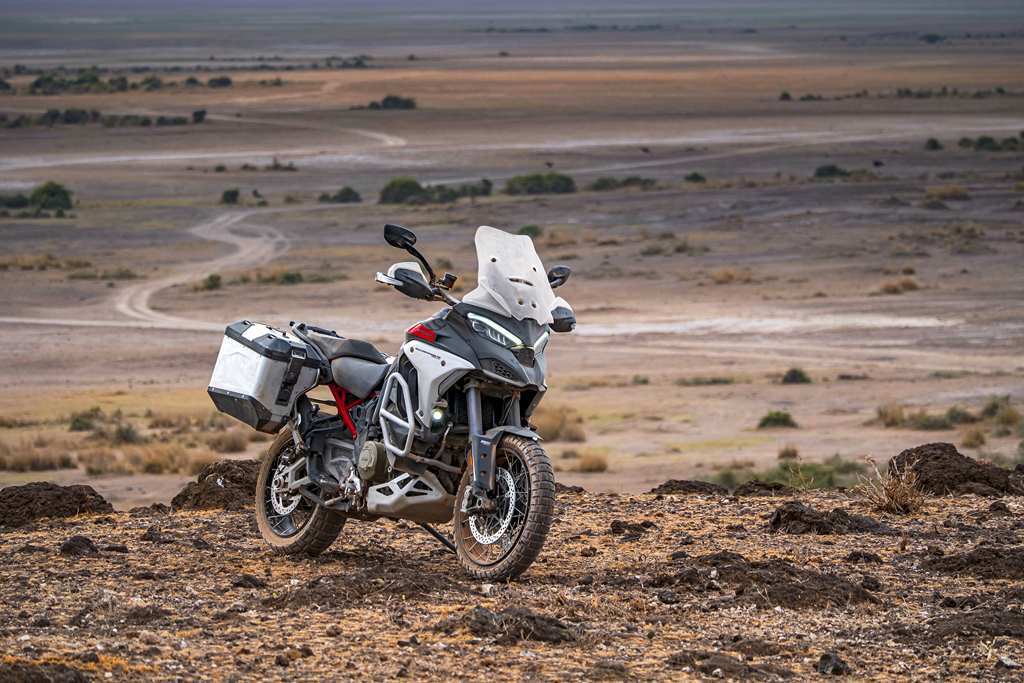 To further support active safety, the Multistrada V4 Rally integrates ABS Cornering, which allows you to take advantage of the braking power of its system even when cornering, Ducati Cornering Lights (DCL), which improve night visibility by illuminating the inside of corners, Ducati Wheelie Control (DWC) and Ducati Traction Control (DTC). These systems use the inertial platform (IMU) to optimize the intervention based on the lean and pitch angle of the vehicle.

To make the most of the potential of the Multistrada V4 in every context, Ducati has developed four Riding Modes (Sport, Touring, Urban and Enduro), which on the Multistrada V4 Rally see an important evolution of the Enduro mode . Selecting the Enduro Riding Mode activates a dedicated Power Mode, which limits the power of the engine to 114 hp with a dynamic and direct response. The DSS Evolution gets ready for off-road riding by indicating the load mode with a specific icon, depicting an off-road helmet. The DTC switches to a lower intervention level and the DWC is deactivated. The ABS on the rear wheel is also deactivated and cornering functionality and rear lift detection are suppressed to adapt to off-road use. 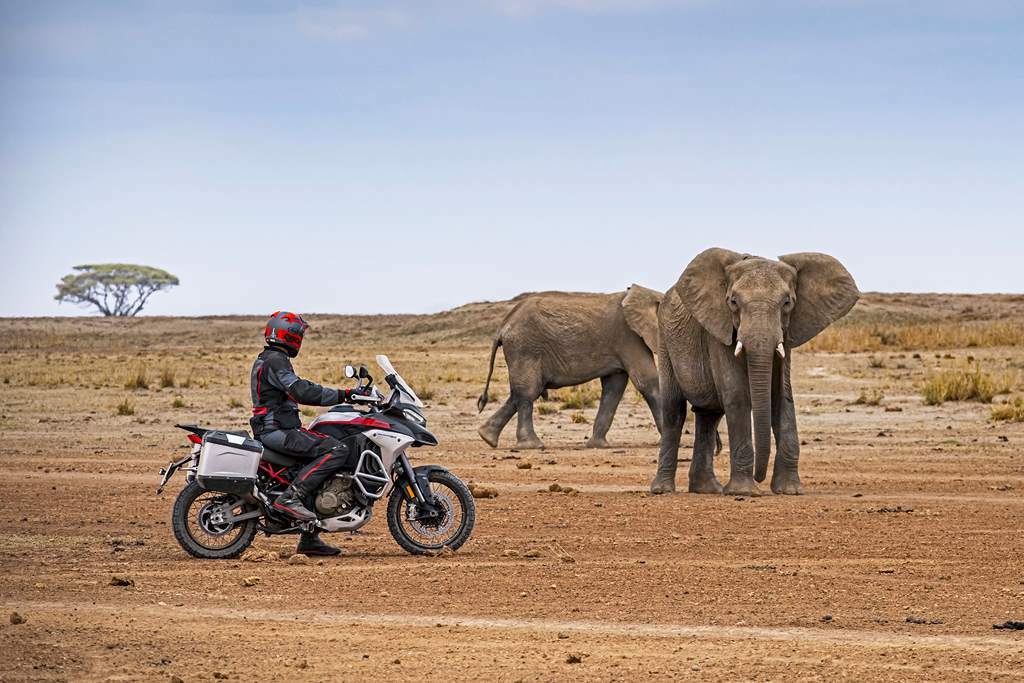 The Multistrada V4 Rally also introduces a brand-new strategy of extended deactivation of the rear cylinder bank, a technical solution debuting for the first time in the world on a production motorcycle . In addition to switching off the rear cylinders at idle with the motorcycle stationary, a function already present on the Multistrada V4, the V4 Granturismo now keeps the rear bank deactivated in other operating conditions to the benefit of fuel consumption and emissions.
With this new strategy, deactivation takes place even with the motorcycle in motion: as speed increases or above a certain power request from the throttle grip, the rear cylinders are reactivated, guaranteeing the character and performance of the V4 Granturismo. This system is active in all Riding Modes.

The 1,158 cc V4 Granturismo engine delivers 170 hp (125 kW) at 10,750 rpm and 121 Nm (12.3 kgm) at 8,750 rpm , with a particularly linear torque curve to ensure a smooth and progressive response at all revs. The performance of this engine, combined with its total weight of only 66.7 kg, allows the V4 Granturismo to continue to be the benchmark in the category for power and lightness. These numbers are combined with refined technical solutions, such as a counter-rotating crankshaft, derived from the experience gained by Ducati Corse in MotoGP, which works “against” the gyroscopic inertia of the wheels, but also the torque curves dedicated to each single gear ratio to combine smooth delivery at low revs, robustness of torque in the mids and power at highs.

In addition to a benchmark level of standard equipment for the category, the Multistrada V4 Rally also has a wide range of accessories. On top of the different saddles, to meet the ergonomic needs of rider and passenger, and the components proposed in the three configurations, the following will be available: different options for the windscreen, steel-tube engine guard, additional LED spotlights, satnav with dedicated support, and various luggage solutions, designed for both the tank and the rear plate – top case or soft bag – for those who want to further enhance the 360​​° tourer qualities of the Multistrada V4 Rally.
It is also possible to make the Multistrada V4 Rally sportier and embellish its appearance with different parts of carbon fibre trim, aluminium levers and footrests machined from solid, dynamic LED indicators and brake and clutch fluid reservoirs machined from solid.

Ducati has created items of apparel to fully enjoy the touring possibilities of the Multistrada V4 Rally. The Atacama C2 suit, for example, with large areas dedicated to ventilation, detachable sleeves and three independent layers, including thermal lining and waterproof membrane, to offer comfort in all weather conditions. Or the Strada C5 suit made of a comfortable stretch fabric, robust and modular in thermal protection, thanks to the detachable Gore-Tex® internal membrane and an internal down jacket that can also be used on its own once the bike is parked.