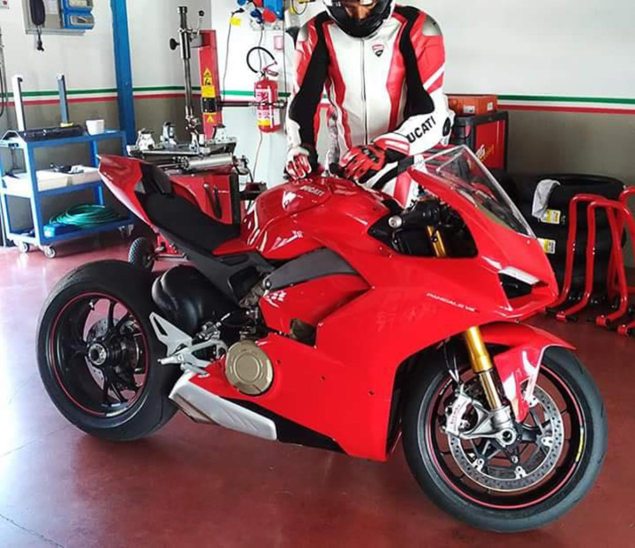 Ducati is all set to make sure it regains the slight loss of progress as it wants to become the number one winner in racing and offers superior road bikes. The L-Twin were doing their job really well but it is time to move the game forward.

The bodywork on the Ducati Panigale V4 is very closely related the previous generation Panigale (the v-twin engine equipped bike), though there are some obvious changes, especially at the front. Ducati Panigale V4 looks like it has a large headlight recesses that will channel air around the body (on the inside), likely to aid in cooling the high compression V4 engine.

Ducati Panigale V4 comes with a frameless (monocoque) chassis design, the aluminum black frame spar going from the rear that is going around the cylinder banks, attaching to the front cylinder bank and a protruding forward to make the airbox.

The exhaust on the Panigale V4 also looks similar to the V-twin model as it is concealed below in the fairing for a neater look. However there are still twin-pipe loop under the rider’s seat, rather than the single-pipe on the previous edition. We hope Ducati has worked hard to remove the heat from the rider-end now. The engine case is also different from before, and placed in a slightly different position on the motorcycle (a bit ahead). 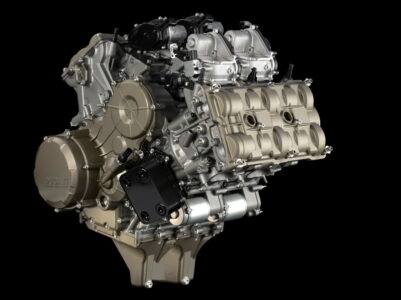 We expect the power and torque to be above the 200 and 115 mark respectively. The Ducati has been trying really hard to make sure it meets emission and performance requirement from its L-Twin engines but it is time as norms get stricter, it needs more cylinders to play around and deliver the best of both worlds.

Ducati can now take the game to an entirely new level and finally get very close to other litre class bikes in every aspect. However, the direct competitor will be the superior Aprilia RSV4 which Panigale V4 goes against it. We expect the unveil to happen in November and other details to follow shortly.