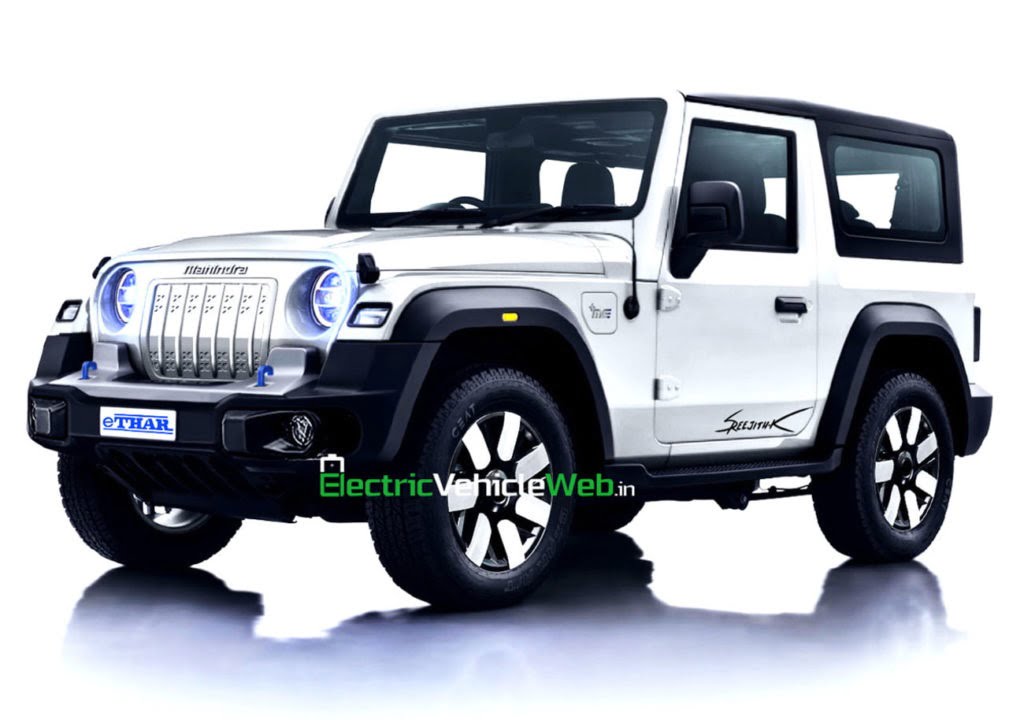 The Mahindra Thar is arguably one of the more iconic off-roaders on sale and the new-generation model is enjoying massive popularity. With its vintage inspired style and a highly capable build, the Thar is making it to multiple garages across the country. The Thar is to the Indian off-roading scene what the Mercedes-Benz G-Wagen is to Germany or the Jeep Wrangler is to the United States of America. And with those off-roaders getting electric versions of their own, someone has envisioned what the Thar would look like in an electric avatar. The renderings from Bimble Designs imagined an all-electric Mahindra Thar or an eThar that will run on lightning with 4×4 capability.

The Mahindra Thar electric rendering retains most of the lines and squared bits from the original design. The design sketch does get upgrades in the form of beefier airless off-road tyres, while that familiar slatted front grille has been covered up. There’s also a custom bumper with a bumper guard, LED headlamps and LED light bars on the roof and bumper. The electric off-roader has been envisioned as a hardtop and even gets a lifted suspension and protective skid plates. Compared to the ICE Thar, the spare wheel has been given a miss while the electric motor is visible below the rear bumper. The designers have also incorporated a functional roof rack for a tent and it gets ladders on each side to get you up there. Given that this is an off-roader, the imagined Thar electric is likely envisioned with two electric motors, one on each axle.

While the render looks exciting, it’s unlikely that the Thar will get an electrified version anytime soon. Mahindra has a couple of new EVs coming up under its Born Electric platform and we will have to wait and watch if an electric off-roader is part of that plan. The company has announced a five-door Thar set for launch later in the decade but an electrified version hasn’t been explicitly stated. Could there be a surprise? We will have to wait until July to find out.