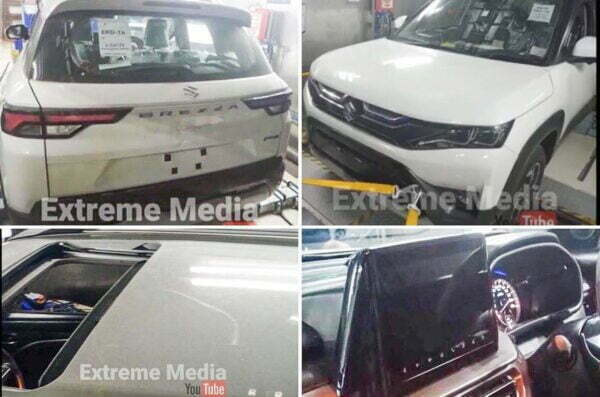 Maruti Suzuki is going on a launching spree after a two-year hiatus and this kickstarted with the all-new Celerio that was launched recently. And now, the company is readying the next-generation Vitara Brezza, arguably an extremely important model in the company’s line-up. While the launch is slated in 2022, the next-generation Maruti Suzuki Vitara Brezza has been spied undisguised and the model is all set to arrive in a completely new design.

The spy images seem to have come out of the factory. The subcompact SUV gets an evolutionary design language with an upright front design. The model gets new LED headlamps with twin LED DRLs. There’s also a wider chrome grille and new bumper, while the model now comes with an electric sunroof. The rear gets a bigger change though with the new wraparound and slim LED taillights. The Brezza branding is now more prominent in the centre, something that’s now a more common design trait on newer cars.

The images also give a glimpse of the next-generation Vitara Brezza’s cabin. The model now gets a larger touchscreen infotainment system with a dual-pod instrument console. There’s a larger colour MID unit in the centre and is likely to get a host of information. Maruti Suzuki could also possibly introduce it’s own connectivity tech with the new Vitara Brezza in the same lines as Kia Connect and Hyundai BlueLink. There will be other upgrades as well including new features, a new multi-function steering wheel, and a new dashboard layout as well.

The next-generation Maruti Suzuki Vitara Brezza is expected to retain its 1.5-litre naturally-aspirated petrol engine. The mill makes about 1030PS and 138Nm of peak torque. It’s likely to get the SHVS mild hybrid system with the 48-volt electric motor. Rumours also suggest of a CNG option in the pipeline to keep up with the rising fuel costs. An ethanol powered version could arrive at a later stage, given Maruti’s newfound focus on Flex-Fuel engines. Transmission choices will include the 5-speed manual and the 4-speed torque converter automatic.

The next generation Maruti Suzuki Vitara Brezza is likely to arrive in the first half of next year. That will be a whole six years since the first generation model went on sale. Given the fact that the Brezza continues to be a top seller in the segment, the new version will only cement its position. It would be interesting to see if the SUV is also upgraded to meet the 5-star safety rating under Global NCAP. The current version gets a 4-star rating in comparison. Expect prices to start around Rs. 8.5 lakh for the new Vitara Brezza when it’s launched.