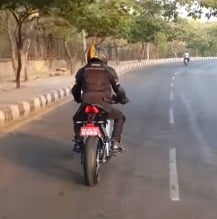 Thanks to the government push towards electric mobility, automobile players across the globe are lining up to explore the potential of the Indian market. Latest in the two-wheeler entrance list is China-based Evoke motorcycles which is planning for some big surprises for the Indian customers.

Evoke motorcycles will establish a new design center in India in addition to exploring the country’s potential to become an export and production hub for the company.
In terms of offerings, the company’s flagship models Urban S and Urban Classic (Generation 1) are currently offered in three markets – USA, Europe, and China. While the former features a naked-style latter comes with a design which is an ode to yesteryears.

Both the models have an impressive range of 200 kilometers which makes them ideal for city commute and even short highway runs. Bikes are loaded with features such as built-in navigation, clutchless design, and precision braking system. Besides, the use of dual-compound tires maximizes the power efficiency and thanks to the upgraded 19kW hub motor, bikes offer 116.6 Nm of max torque. You can choose from three different modes offered on the bike: Eco, City, and Pro. The company is also planning to launch a premium-segment cruise motorcycle, called 6061 in the market later this year.

More importantly, Evoke motorcycles is working on to bring its electric motorcycle in India under the name of Project M1. Price should be competitive in nature and come with fast charging feature allowing the battery to recharge from 0 to 80% in 15 minutes only. As of now, there is no local sourcing as far as parts for Project M1 are concerned but in the near future, the company estimates to achieve around 70% localization, helping it to have competitive pricing for its products.

The company is also looking into setting up local charging infrastructure through the cost-effective EVs stations. Using the sophisticated software and algorithm which the company has developed painstakingly over the years, Evoke plans to establish special charging stations for its motorcycles. With a level-2 charging facility (1-module), it will take 15 minutes for ultra-fast charging (max output of 7.7kW) while DC fast charging facility with a max output of 50kW also take 15 minutes for 3+ modules.