EXCLUSIVE: Jeep to launch Compass BS-VI Diesel Engine By First Half Of 2019 – TrailHawk Will Get It First

Jeep to launch Compass BS-VI Diesel Engine By First Half of 2019. Jeep is getting ready with this a year in advance, hence the Trailhawk launch was delayed

The Jeep Compass is the American car manufacturers most affordable and features loaded SUV that has been launched in the Indian market. Right from its launch, Jeep has sold over 25,000 units of the Compass and they have been receiving many requests for a diesel automatic powertrain. Jeep has been working on this engine and gearbox combo even before the launch. We now learn that it will come and be compliant with the BS-VI engine norms that will come into force in the year 2020.

Jeep, as we know, is also working on launching the Compass Trailhawk version and it will be the first variant to get the BS-VI compliant diesel engine. The current 2WD manual gearbox equipped 2.0 litre engine will also become BSVI compliant.

The automatic gearbox that will be coupled with the diesel motor will be a nine-speed transmission. In addition to this, the bookings for the Jeep Compass Trailhawk edition have commenced. This new variant was supposed to be launched in 2018, but ThrustZone has learnt that the launch has been further pushed over and it will be launched by first half of 2019. 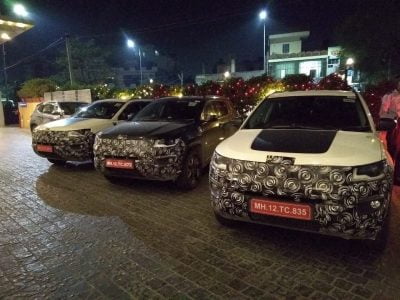 The American car manufacturer has also started testing the Indian spec Compass Trailhawk edition. The test mule was spotted recently in Jaipur. Once Jeep launches the Trailhawk variant it will be placed on top of the range and it will come loaded with many modern features.

In addition to the diesel automatic powertrain, the Compass Trailhawk will be loaded with a four-wheel drive unit that will get low range and ‘ROCK’ mode for better off-road capabilities. If we compare the Trailhawk variant with the standard Compass, it will be 20mm higher and it will get new design front and rear bumpers that will help in better approach angle upto 30 degrees and departure angle upto 33.6 degrees.

Once launched in the Indian market, the Jeep Compass Trailhawk will most probably priced Rs 2.5 lakh more than the current top end variant. The Compass Trailhawk will compete against the upcoming Tata Harrier, Hyundai Tucson AWD and Honda CRV to a certain extent and segment above SUV’s such as Toyota Fortuner and Ford Endeavour to a certain extent.

VIDEO: What The… Scorpio Driver Takes Rash Driving To Insanity Levels With 10 People Hanging Of The SUV