Fiat Chrysler Automobiles NV, also known as FCA, is an Italian controlled multinational corporation incorporated in the Netherlands, and headquartered in London, is currently the world’s seventh largest auto maker. The group was established in late 2014 by merging Fiat S.p.A. into a new holding company, for tax purposes. The holding company is listed on the New York Stock Exchange and Borsa Italiana in Milan. Exor S.p.A, an Italian investment group controlled by the Agnelli family, owns 29.19% of FCA and controls 44.31% through a loyalty voting mechanism.

On May 6, 2014, Fiat Chrysler Automobiles announced their company’s 5-year business plan.The company expects that sales will increase to 7 million units, revenues to €132 billion, net income to €5 billion and industrial debt will peak at €11 billion in 2015, and then reduce to €0.5-1 billion by end of 2018.The Group updated its business plan targets in January 2016 at the time FY 2015 were announced. Much of the global growth will be focused around Jeep, due to its high visibility globally as well as the growing SUV market in developing markets.

Fiat-branded cars such as the Punto, Linea and Avventura may be on their death rattle in India as Fiat Chrysler Automobiles, FCA could pause selling these cars due to its lower sales, which makes the ballgame untenable. This huge decision has been taken in order to have an unclouded target on the Jeep brand.

Together, the Punto, Avventura and Linea manage to sell just over 500 units per month, making dealerships and after sales service centers fruitless. Fiat’s Indian unit is now juggling its tasks with cumbersome amount of stress to stay adrift mainly on the back of diesel engine sales to Maruti. FCA’s long term vision is to take the ‘Jeep’ brand on a bigger scale than the ‘Fiat’ brand, which is averaging 500-600 cars per month for all the current models.

Jeep fits the bill as it’s a major brand across the big blue marble with a good fan following in India. Meanwhile, Jeep plans to launch the Compass SUV in India over the next couple of months. The Compass, which is expected to tote a price tag of 20-25 lakhs, which is Jeep’s cheapest offering in India and is expected to manifest itself as Hyundai Tucson’s combatant. 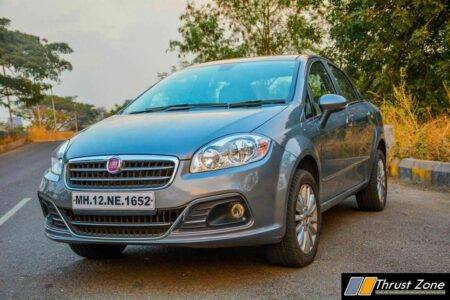 FCA has repudiated to comment on weeding out Fiat branded cars from the Indian market. Seems like India is going to have a forthcoming sans Fiat, as it isn’t anymore exhilarating and it’s current portfolio of cars have been unwaveringly thinning out one car after the other. New cars such as the Argo hatchback and the Aegea sedan which were actually a replacement for Punto and the Linea respectively haven’t yet been green-lighted for the Indian market despite the Punto and Linea being replaced in other upcoming markets.