Hero Xtreme 160R vs X-Blade 160 Vs Gixxer 155 vs Pulsar NS160 vs Yamaha FZ16. We think this is the final comparison test for this segment as all manufacturer are finally here! The recently launched Honda X-Blade in its BS6 avatar is pitted against the likes of Hero Xtreme 160R, Suzuki Gixxer, Yamaha FZ V 3.0, TVS Apache RTR 160 4V, and Bajaj Pulsar NS160. In this specification comparison review, we take a look at what these entry-level naked motorcycles have on offer.

X-Blade has largely remained unchanged in its latest BS6 version though Honda has made some changes to make sure the bike stands up to the competition. New graphics have been added to its tail and fuel-tank while the tank shrouds now getting the same paint job as the bike. Besides, the mid-section of the X-Blade has got a textured finish.

Xtreme 160R is, undoubtedly, the sleekest bike in the Hero’s stable. Its design is contemporary and thanks to the modern design elements, the bike evokes powerful sporty emotions. TVS Apache RTR 160 4V has received a new face in its BS6 upgrade and its well-proportioned demeanor continues to remain its biggest strength. Suzuki has kept things simple and uncomplicated with Gixxer.

There are important additions such as LED headlamps a year ago and in the latest update, the company has added tank shrouds to help raise its appeal. FZ V 3.0 hasn’t undergone any major change in its BS6 version with Yamaha continues to retain the muscular profile of the bike. Bajaj Pulsar NS160 is the oldest in the lot though it looks fresh and held its ground against the competition sturdily. 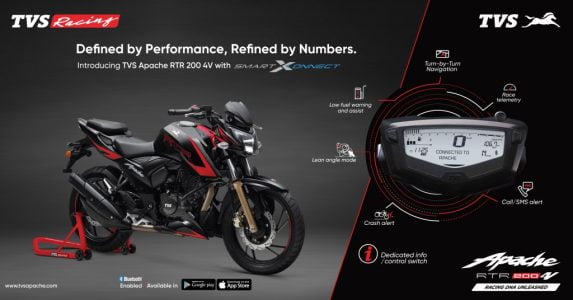 Features and Equipment
In terms of features and equipment, all competing bikes are quite evenly matched. Except for the Bajaj NS160, you will get a digital display and LED headlamps in all other motorcycles. Instrument clusters in all offerings are laid out horizontally and display information on a host of important parameters. Honda X-Blade has got updated switchgear which includes the hazard light and engine start-stop switch. TVS Apache, however, stands out from the crowd thanks to its SmartXonnect and Glide through Technology which allows the rider to move the bike forward once the clutch operation is released. 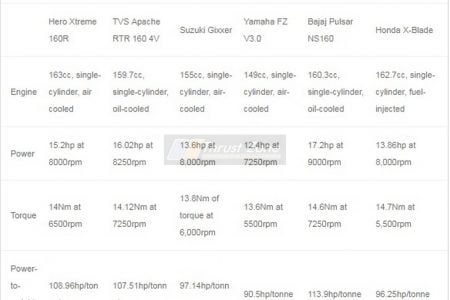 Engine and Transmission
Powered by 162.7cc single-cylinder, fuel-injected motor, Honda X-Blade puts out 13.86hp and 14.7Nm in its BS6 version. While the power figure remains similar to the BS4 model, the torque has increased to 14.7Nm which, in fact, is the highest in this comparison. Hero Xtreme 160R gets BS6 compliant 163cc, single-cylinder engine churning 15.2hp, and 14Nm of max power and max torque respectively. In comparison, TVS Apache (16.02hp/14.12Nm) and Bajaj NS160 (17.2hp/14.6Nm) are more powerful though lighter curb-weight of Xtreme 160R means there won’t be much difference in real-world performance of these bikes. Suzuki Gixxer and Yamaha FZ V 3.0 have to make do with lower output compared to their BS4 versions with the latter being the lowest in terms of its power and torque figures in this comparison. There is no difference in the bikes as far as transmission is concerned as all motorcycles use 5-speed gearbox for channelizing power to wheels. 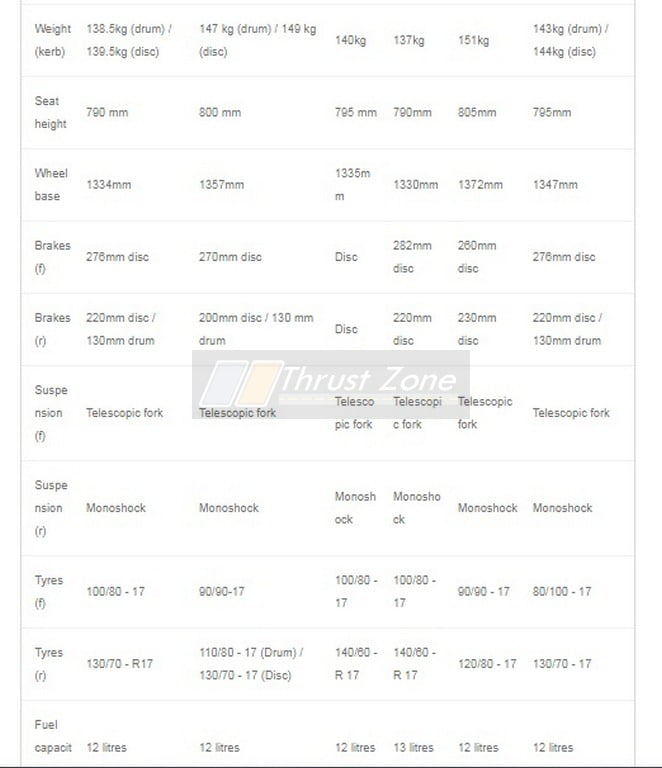 Chassis and Suspension System
In terms of structural underpinnings, all contenders use telescopic fork front suspension and monoshock rear suspension. The stopping power is provided by a combination of disc/drum brakes in Honda, Hero, and Apache while Bajaj, Suzuki, and Yamaha come equipped with discs both at the front and the rear end. In terms of curb-weight, Xtreme is lightest (138.5kg) while Pulsar NS160 is the heaviest tipping the scale at 151 kg. Pulsar and Apache feature slimmest front tires which are quite surprising given the fact that these two bikes are the most powerful in this comparison. Gixxer, on the other hand, has got the widest rear tire while in Apache; the width of the rear tire varies depending upon whether you have opted for a disc or a drum model.

Price Comparison
At a starting price of Rs 1.06 lakh, X-Blade positions itself in the middle of the price band with Suzuki Gixxer topping the price chart at Rs 1.12 lakh. All contenders in this comparison are quite evenly matched on important aspects of consideration – be it style, features, engine, or performance. X-Blade comes out to be a formidable contender on the paper and it seems this Honda is quite capable of giving a tough competition to its rivals in the sport-naked category of the Indian bike market. With the introduction of the fantastic Xtreme 160, only a comparison shootout will solve this answer though!