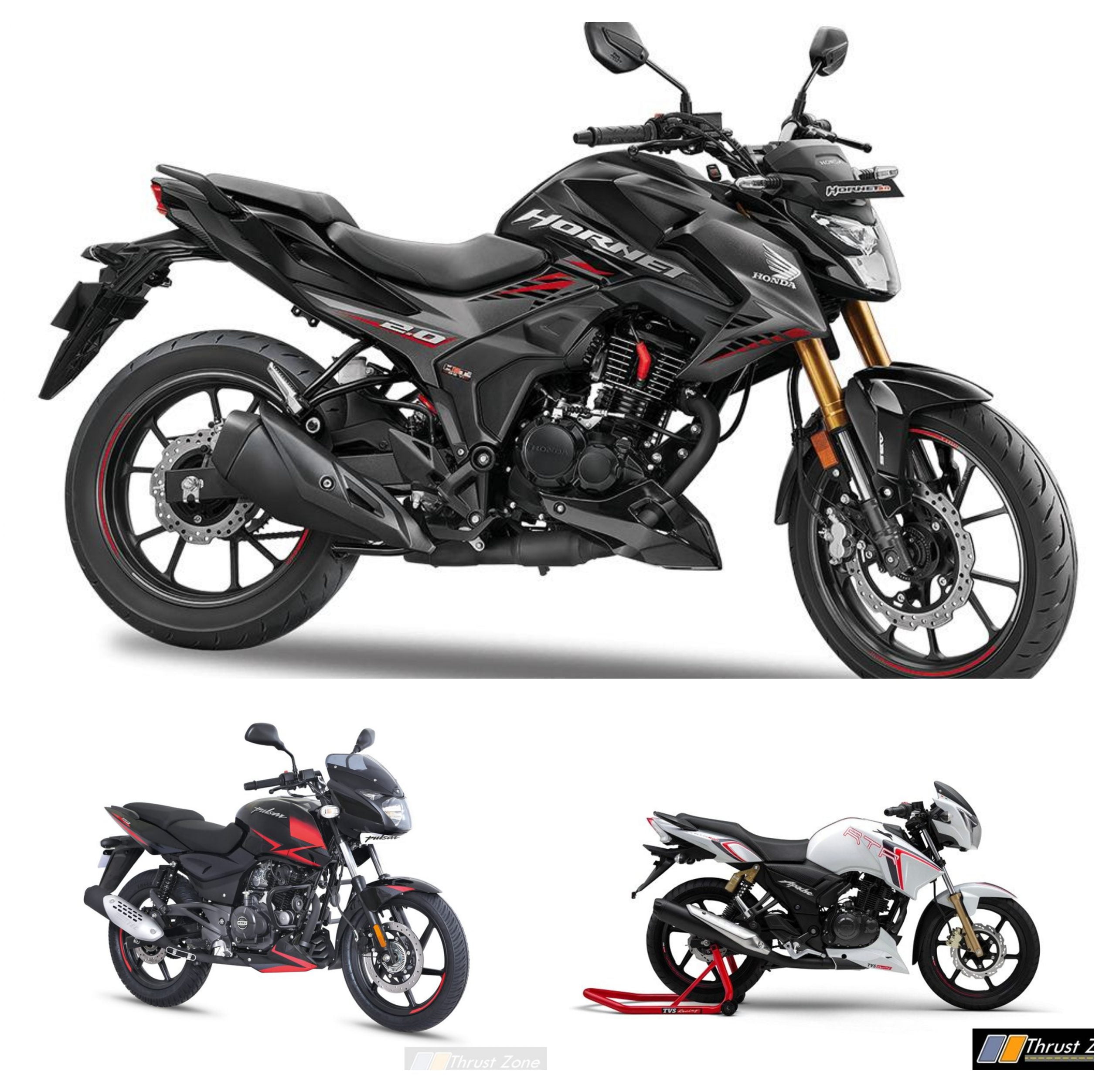 Honda upgraded its Hornet’s capacity from 160cc to 180cc last year when the bike was upgraded from BS4 to BS6 in the Indian market. This made the Hornet 2.0 a direct rival to the
TVS Apache RTR 180 and Bajaj Pulsar 180. Here’s the detailed specification review that will help you to decide which one of these fits your needs perfectly.

Design and Styling
In terms of styling, Honda and TVS are more attractive in their turnouts. Both bikes have adopted naked styling and thanks to their aggressive demeanour, they score way above the Bajaj in the looks department. Hornet 2.0 has got some interesting design cues – bold cuts and creases, split seat, and sharp fuel tank extensions. Apache RTR styling is along the same lines though the overall tone of the design is a bit subdued here.

That said, TVS has done a nice job by equipping Apache with a belly pan, tank extension, and stepped seat. Pulsar 180 doesn’t come across as aggressive as the other two are in this comparison though it has got an ace up its sleeve – road presence. It has also got more macho credentials thanks to the extra bulk apparent from both side and rear profiles of the bike.

Features
Honda offers a digital tachometer and LED headlamp though it doesn’t offer an automatic headlamp on (AHO) feature. Both TVS and Bajaj have got AHO though these bikes have got halogen lighting element which pales in comparison to Honda’s LED. TVS misses out on stepped seat arrangement while the Bajaj doesn’t feature a low oil indicator. LED tail lamp is a feature that is shared by all the bikes though none of the bikes here in comparison offers USB charging port.

There’s not much difference in the displacement of the engines of the three bikes and as a result, we have the performance figures which are closely stacked to each other. Hornet 2.0 is the most powerful with 17.03bhp and 16.1Nm though Apache (16.56bhp and 15.5Nm) and Pulsar (16.78bhp and 14.52Nm) are not far behind.
Also, worth mentioning is the cooling system of these bikes as TVS uses an oil-cooled mechanism while Honda and Bajaj have gone for an air-cooled system for their bikes. All three players use a fuel injection system for meeting stringent BS6 norms and come mated to a 5-speed transmission.

Suspension, Tires and Braking
Honda Hornet is the only one in this comparison that comes equipped with the upside-down front fork suspension system while the other two have relied on more conventional telescopic suspension for suspending their front wheels. The rear suspension system on Honda is monoshock while TVS and Bajaj have got MIG with spring aid and Nitrox Shock Absorber respectively. All three bikes in this comparison use tubeless tires and have got both front and rear disc brake arrangement with a single-channel ABS system for better-stopping capabilities. 17-inch alloys are also shared among the bikes although the tires’ sizes used are different on each bike.

Dimensions
In terms of dimensions, TVS races head in overall length (2085mm) although Honda has the longest wheelbase (1355mm) and widest footprints (783mm). Bajaj, on the other hand, is the tallest (1115mm) and heaviest (151 kg) in the lot. Both TVS and Bajaj have used double-cradle chassis frame though Honda has selected the Diamond frame for underpinning its Hornet 2.0.

Value for Money
Bajaj and TVS offer better value for money as apparent from the starting price of Pulsar 180 and Apache RTR 180 which are set at Rs 1.07 lakh and Rs 1.08 lakh respectively. Hornet 2.0, on the other hand, starts at Rs 1.28 lakh although this Honda comes equipped with a diamond frame, USD front suspension, and LED headlamp to justify its high-ish price tag (all prices, ex-showroom, Delhi).