Global NCAP has given a disappointing two-star rating to the new Maruti Swift. The car performed lowly on driver’s chest and feet protection besides displaying marginal safety for the child dummy. Maruti Suzuki popular hatchback, the Swift has scored a disappointing two-star in the Global NCAP crash test. The report published by Global NCAP revealed a lowly score for Swift which starkly contrasts to the four-star rating achieved by Maruti Vitara Brezza in the same test a couple of weeks ago.

Despite new Swift getting front dual airbags and Isofix child seat mountings standard, the crash test has rated car poorly on the safety aspect. The poor safety protection for the driver and unstable body shell of Swift are the main reasons attributed for this low score. Global NCAP said that while the Swift offered good protection to the head and neck of the front occupants, it fails to provide enough protection for the chest and knee area.

The body structure behind the dashboard could dangerously impact the safety of the front occupants and the driver’s foot safety is also compromised due to the pedal position.The report also highlights the poor child protection score of the new Swift. The 18-month-old dummy in the test got inadequate protection while the safety for the chest of 3-year-old wasn’t found to be sufficient either.

The previous-generation Swift went under similar NCAP testing in 2014 and scored Zero-stars owing to the absence of airbags and Isofix mountings. This time, however, the rating has improved. Global NCAP noted that the Indian Swift has performed poorly compared to its European model’s three-star rating. The Euro-spec Swift feature side and curtain airbags and autonomous braking – none of which is available on the Indian version. 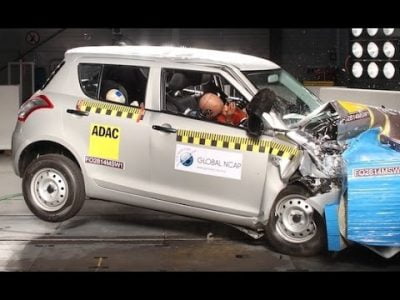 Meanwhile, the Elite i20 has got 3 stars in Global NCAP rating. The car doesn’t get ESP and side and curtain airbags like European spec, but Indian spec is also similar to the South African spec car. The South African car is also imported from India. Hyundai i20 has secured 10.15 points out of 17.00 in adult occupant safety and 18.16 points out of 49 in child occupant safety. The crash tests were conducted at the usual and standard NCAP speed of 64 km/h.

The 18-month-old child dummy in the rear-facing child seat installed using the adult seatbelt showed good protection to head and chest. The 3-year-old child dummy, which was placed in a forward-facing child seat, could not prevent excessive forward movement, thereby exposing the head to a high risk. The test model did not offer 3 point belts in all seating positions. It also didn’t have ISOFIX as standard, but it offered the provision to disable the passenger airbag. Global NCAP has rated the body structure of the made-in-India South African-spec Hyundai i20 ‘unstable’.