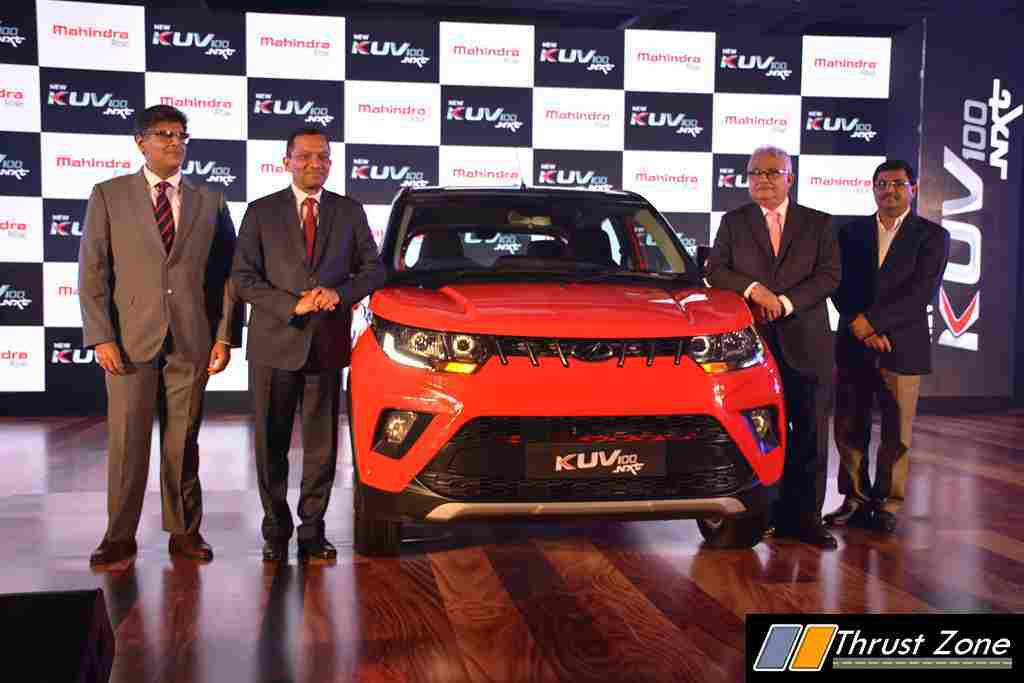 KUV100 NXT will go against its tough rival, the Maruti Ignis as is struggles with issues which are resolved in this new 2017 version

Mahindra and Mahindra, the very popular and homegrown auto manufacturer will soon introduce the reinvigorated KUV 100 compact SUV in the near future. The all new mini SUV is called as the KUV100 NXT. The new model will carry cosmetic as well as mechanical changes, as well as revisions to the range. The small SUV was first launched in January 2016, and is one of the smallest SUV in its guild.

The essential goal of Mahindra and Mahindra is to improve the overall styling of the KUV100 with the help of launching a new facelifted version. The current outgoing model is a bit quirky and has failed to grab attention from the array. The new model will gets a cleaner and fresh design with a revised tailgate. The new restyled bumpers with new toothed grille and fog lamp assembly make the SUV look more dauntless. As a result, the length will increase from 3.675 mm to 3,700 mm. The new skid plates will further add to the SUV inspired styling. Additionally, grille will now have bigger slats, and there will be re-profiled headlamps that are stretched backwards.

The doors and tailgate now carry a much sharper and aggressive crease lines. The wheel arches will be toned down and will be fitted to the newly deigned 15-inch diamond cut alloy wheels. Mahindra will offer six color choices and up to three two-tone schemes for the KUV100 NXT. The SUV now gets body cladding that runs across the car length. Other features include integrated roof rails, tailgate spoiler and day time running lamps.

While the current model is available in both five and six seater layout, the updated model is reportedly to be offered as six-seater only. The five-seater model will be available on made to order basis. The top end model will also get an all-black theme with new features and better quality material.

Mahindra had decided to sell the KUV100 NXT in only ten variants, in K2+, K4+, K6+, K8 and the K8+ grades. Mahindra will continue with the same 82 bhp 1.2-litre mFalcon dD75 diesel engine for the KUV100 which is mated to a single 5-speed manual gearbox. Mahindra has tuned the engine to offer improved fuel efficiency. Overall, the NVH (Noise Vibration harshness) levels in the car are also likely to be improved. According to the ACI, the updated model will have strengthened engine mounts that has reduced engine noise and vibrations to a large extent.

While the petrol 1.2 mFalcon G80 motor is capable of producing 82 bhp and 114 Nm of peak torque, the diesel engine churns out 77 bhp of power and 190 Nm of peak torque. In order to improve its ride quality, the company will add reworked suspension setup that now has longer travel rate. Additionally the new SUV is said to have improved approach and departure angle likely to improve its performance on rough roads. The mini SUV directly rivals the Maruti Ignis and other B segment hatchbacks including the Hyundai Grand I10 and Maruti Swift.