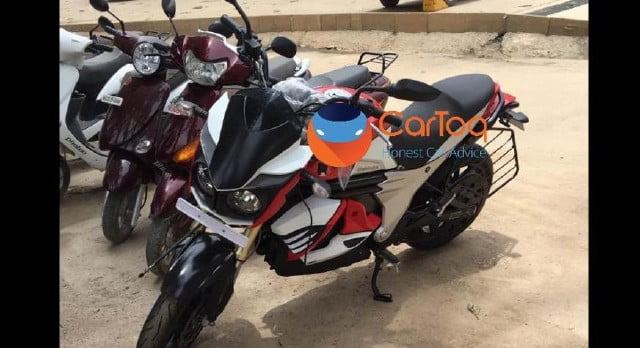 We all know that electric mobility is the future. Our Government has proposed that by 2020 the introduction and sale of electric automobiles will be in full swing. Its no surprise that such short time means manufacturers themselves have prepared for the change. In fact, carmakers like Hyundai have already revealed their future electric products which will make their way into India.

However, unlike carmakers, motorcycle manufacturers seem relatively quiet. Now, however, the change is being felt upon. TVS introduced their Zeppelin Concept last year and a few others showed electrified versions of their regular run of the mill bikes. Mahindra Motorcycles seemed to have taken the latter route as we have some cool spy shots of their flagship bike – the Mojo. Mahindra is active when it comes to participating in a new segment and this case is no different.

How can we be so sure that this is an electric Mojo?
Well for starters the gear shift lever is missing. Normally EV’s miss out on gear shifts as they’re propelled via motors which do not need a transmission. They’re as simple as twist and go. The second most important feature that this Mojo sport is a belt drive instead of a chain drive, which its petrol-powered counterpart comes with.

Remember the two fat-cans that the Mojo used to come with; well here they’re no more which again hints at this being an EV. What makes it all the more understandable are the bikes parked near to it. Puzzled? Well, you should be because all the bikes parked come under the EV category and that’s exactly why we are very sure that this Mojo is an electric one.

With the recent law introduced which lowers the GST rates levied on EV’s by 10% it makes sense for Mahindra to propel the launch of EV’s in our market. As of now there aren’t many details available of the Mojo electric variant. When launched this new electric Mojo will be sold alongside the two other variants of the Mojo – the XT 300 and the UT 300.