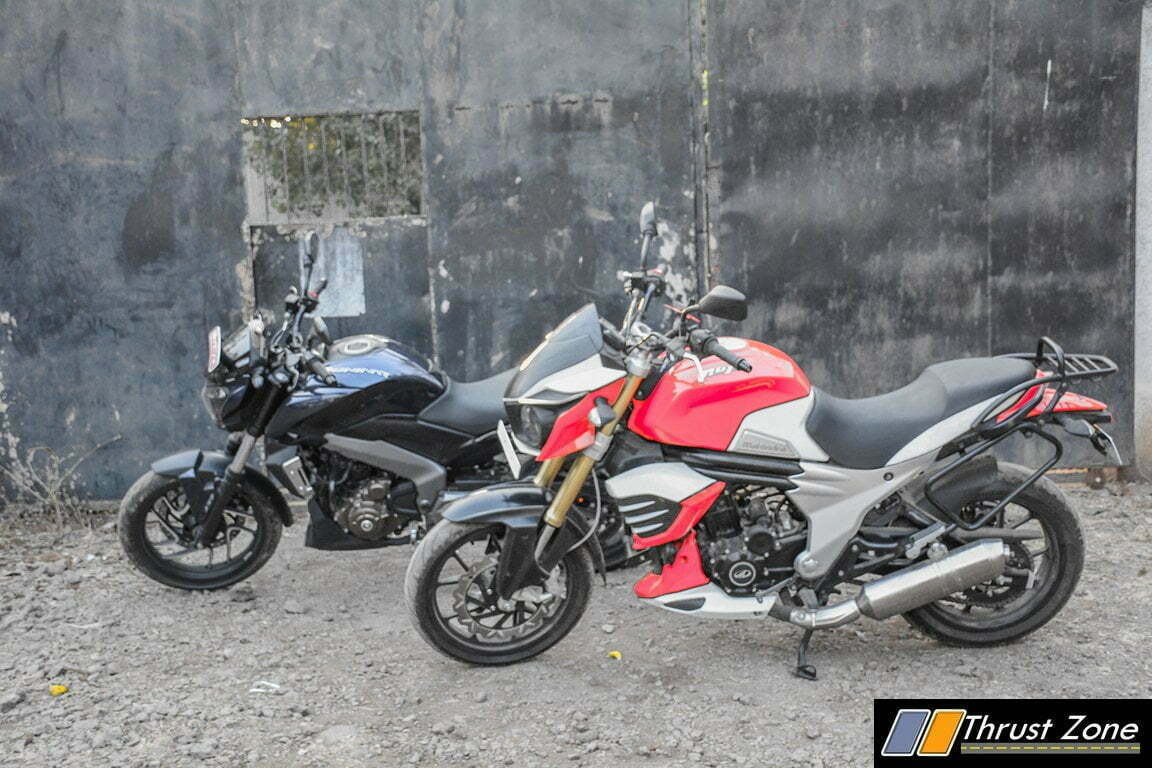 Touring on a motorcycle ‘concept’ hit us Indian bikers back in the year 2008. This was when a large part of population was connected on the Internet through portal, forums, social media and website chat blogs. We saw pictures, we searched thing and we found things that we wanted to do, or to do something that we always wanted to do but never knew how to start and execute.

All of that mental and physical barriers went down when good motorcycles and maps were unveiled and stories were told. Sport motorcycling began in early 2000 and now 17 years later (yup we feel old too) there are motorcycle options, the internet got faster and so did life. We are looking for fast touring machines which are safe, fun to ride and provides all the thrills at the same time. Since we are a part of Asia, we would love to save some cash while buying, running and maintaining the motorcycle.

All the manufacturer gave us something, from 150cc and now we have reached to 400 after a wide gap that we saw with the quarter litres. A special segment has been carved now between 300 and 400 and this is where we have new competitor fighting for supremacy. Dominar 400 is right now talk of the town. Last year it was the Mahindra Mojo that was talk of the town. We got them together as clashes don’t get bigger and better than this. We ride them for a day back to back after road testing them some time earlier. Does the Mojo has enough of its name? Will the Dominar dominate this night? Hop on folks, it isn’t what it is on paper and let’s find out what the real thing is! 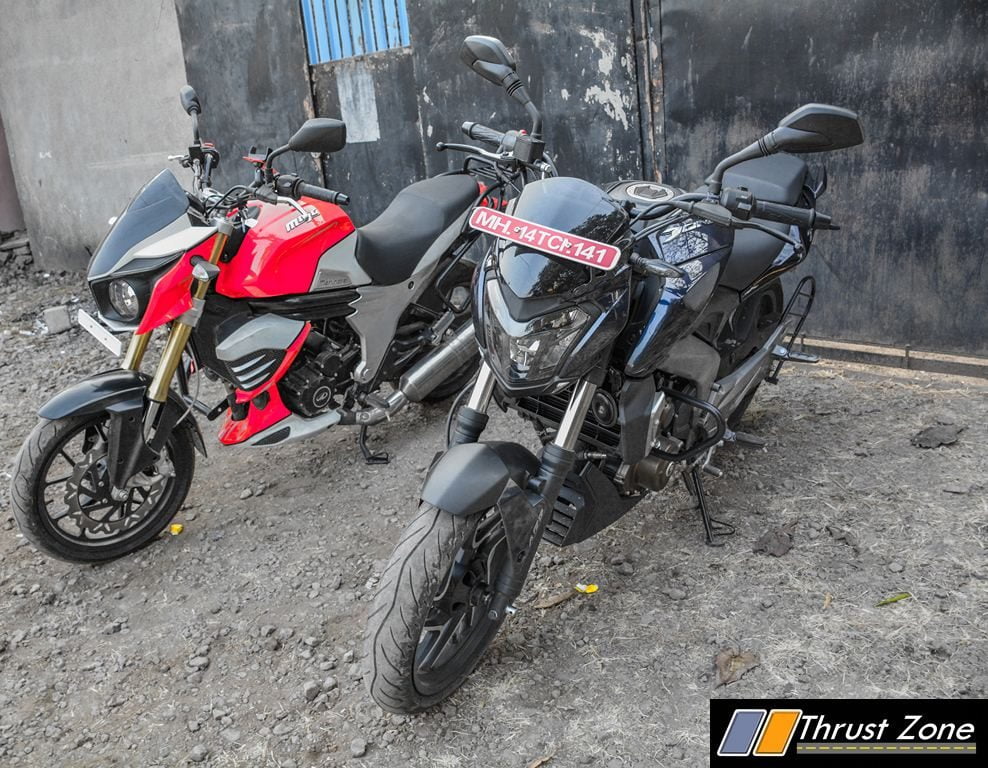 Both have a muscular design approach towards their motorcycle. These motorcycles look like a segment above as they are down right beefy, there is a lot metal involved in the making. Mojo has a little quirky approach with the paint schemes on offer along with the hit or miss headlamp design. The headlamps on the Dominar 400 are chunky and solid one piece unit which has LED unit also that adds to the wow factor. There are LED DRL’s on the Mojo which are eye brow shaped that look good when lit.

The tank on both motorcycles is chiseled, but the Dominar has more streaks and gets more sharper at the front-end. Both fuel tanks have high quality 3D premium badges on them bearing their names. The rear is very minimalist for the Mojo, but the Dominar still has a proper tail-piece which has the ‘D400′ badge on it. Both motorcycles have LED tail-lamps, the Mojo’ rear lights are much better, while Dominar rear light arrangement isn’t pleasing to the eye, atleast for now. 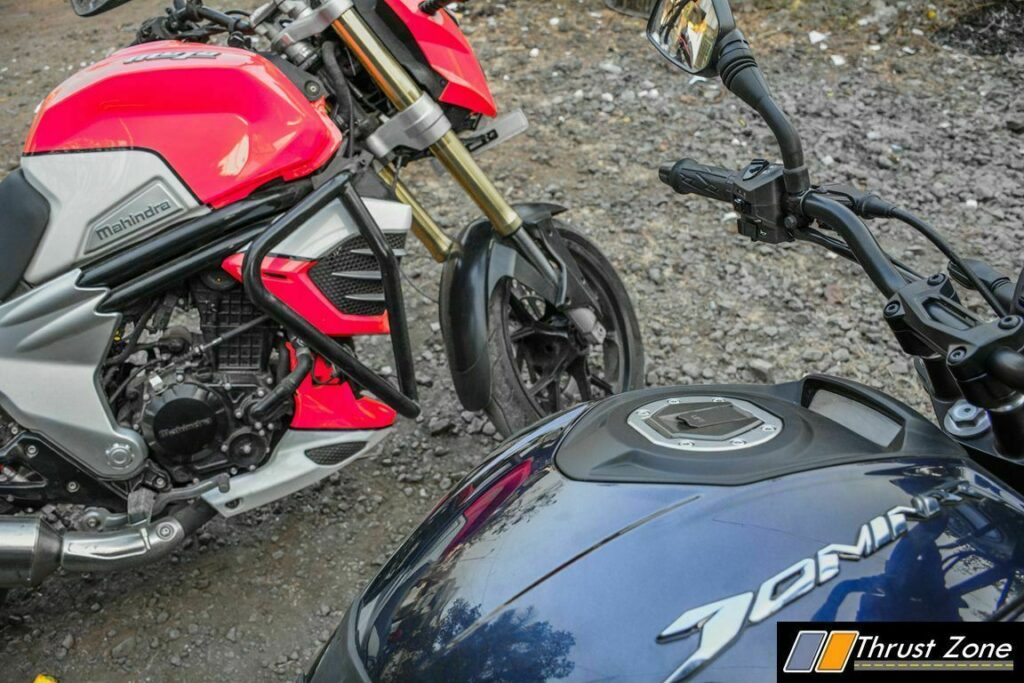 Dominar has machine cut alloy with the ‘chrome’ effect which looks sporty and grabs attention. Mojo comes with the infamous dual exhaust canister which is also a hit or a miss with most people. Features list also includes Dominar having LED indicators, while Mojo deos away normal clear lens indicators Overall, the Dominar looks more sportier and sharper, while the Mojo’s imposing stance and slightly quirky approach helps it stand out.

This is probably the first time and last time we get to say this, both motorcycle have ‘BACK LIT SWITCHES’ this time. The Dominar 400 has blue color back lit switches, while the Mojo is red. Speedo is clearly where, aesthetically, the Dominar unit is much more pleasing, but the Mojo takes it down by offering so many more options. Apart from the common tell-tale lights, the Mojo offers a race mode, top-speed recorder and LED guided RPM indicator. Both motorcycles have RPM redline limiter light. 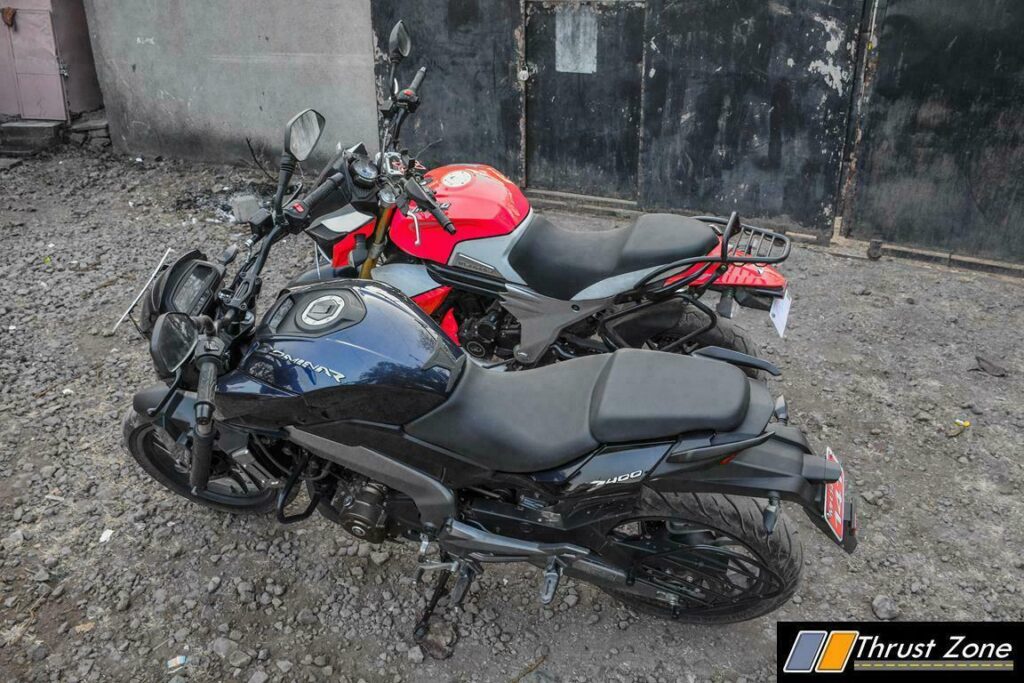 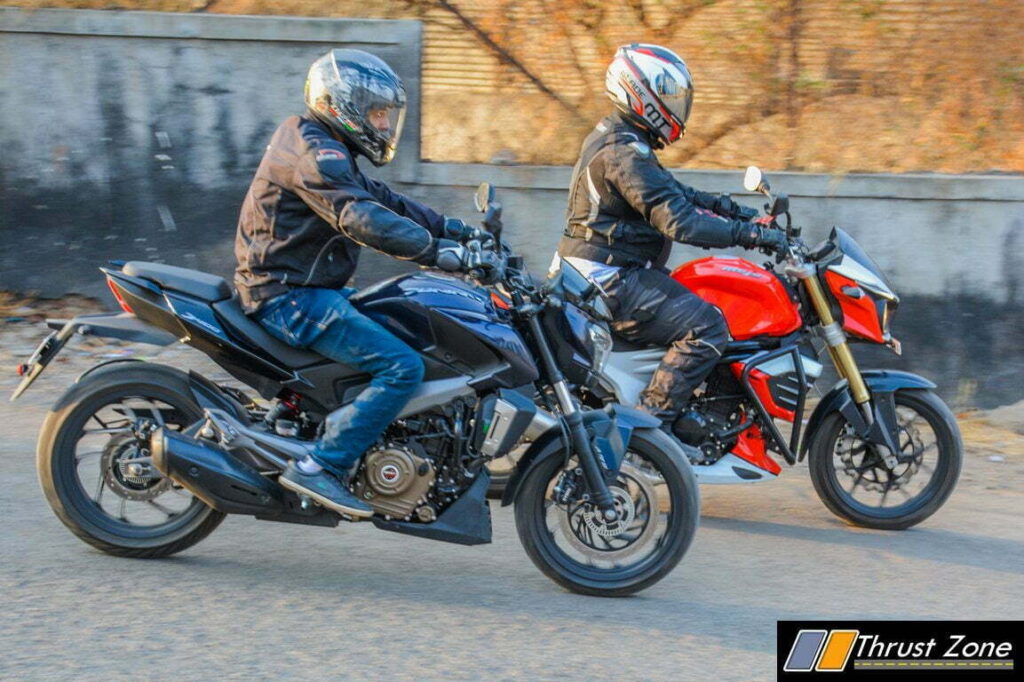 The Mojo makes you feel you are piloting a big machine. Both have rear seat foot pegs, which help you lock your knee on tank perfectly for spirited riding. Seats on both motorcycles are slightly firm and do a great job for long distance touring. Both motorcycles also have great pillion seat and will do the job. Mirrors are well mounted on both motorcycles and they show a good vision of what is behind. 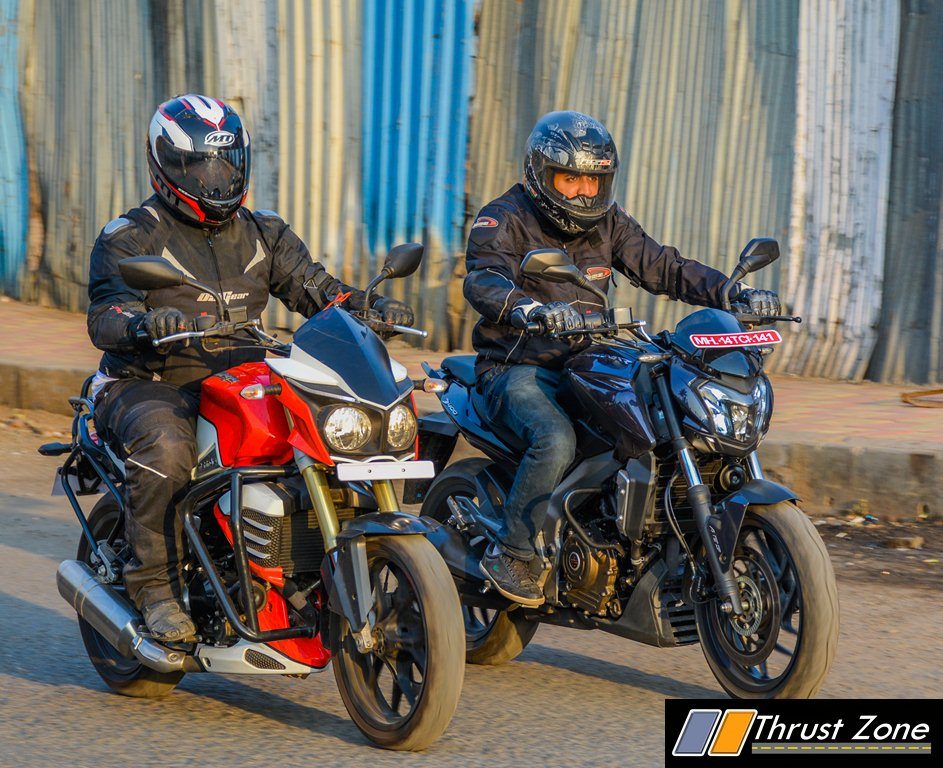 When it comes to performance, there is a subtle difference between the two. While the Mojo is 296cc, the Dominar is 373cc. The Mojo, like Dominar has four-valves, liquid-cooled and fuel-injected motor. DOHC setup is seen on the Mojo, while the Dominar 400 is an SOHC unit. The Mojo makes 28 PS of power and 30 Nm of torque. Meanwhile, the Dominar makes 35 PS of power and 35 Nm of torque. Mojo makes it at slightly lower RPM than the Dominar 400. Both motorcycles weight same full fueled at 182 kgs. This is what happens on paper. How is it on the road?

For starters, let’s begin with the Mojo engine, with taller gearing, a much more flexible motor that offer good low-end torque allows the rider to trundle around in town in higher gears at lower rpms as the knocking is quite less too. The engine is far more smoother and conventional in fashion, for example, like an Japanese engine as the engine has a continuous powerband. 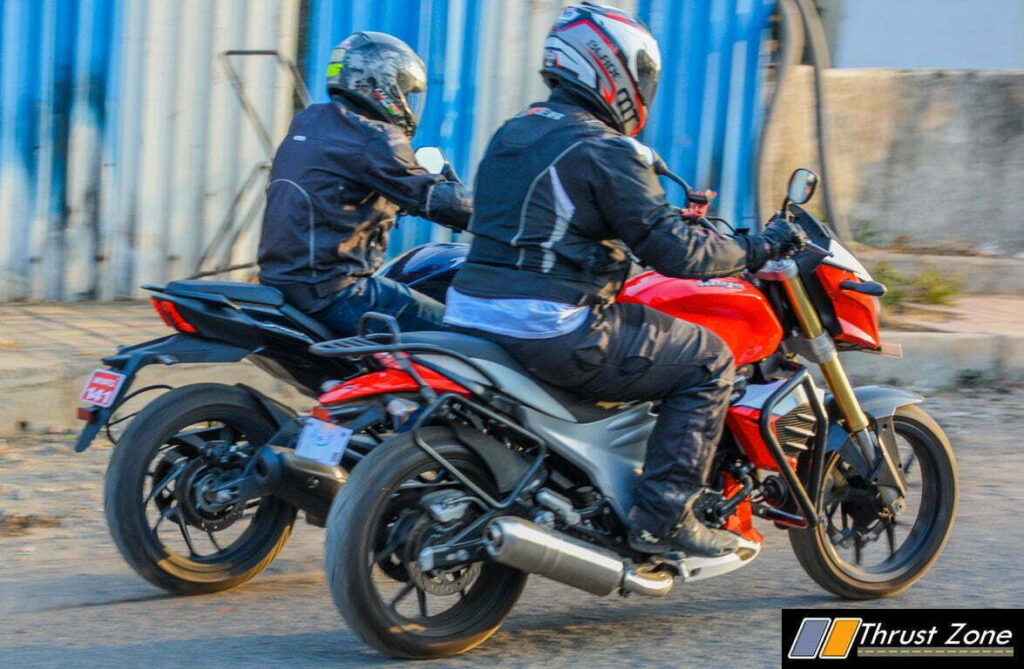 Meanwhile, the Dominar 400 is an engine taken from the Duke which is inspired from the blue smoke spitting two strokes. There are two powerbands, which are immediately apparent. From 4000 RPM, the engine takes of to different level and provides mid-range and top-end power. However, it isn’t lumpy and the cam ‘kicking in’ character is missing from the Dominar 400 by a big margin over its donor engine.

A reason why the Dominar 400 is a stellar performance package as it is more linear, high on refinement and is the most flexible KTM derived engine till date from Bajaj. Still, it isn’t an continuous powerband that is seen on the Mojo. The Mojo has too much bass and sounds like a proper sporty tourer when it comes to exhaust note. In this process, the Dominar 400 sounds throaty and sporty at the same time with good bass. 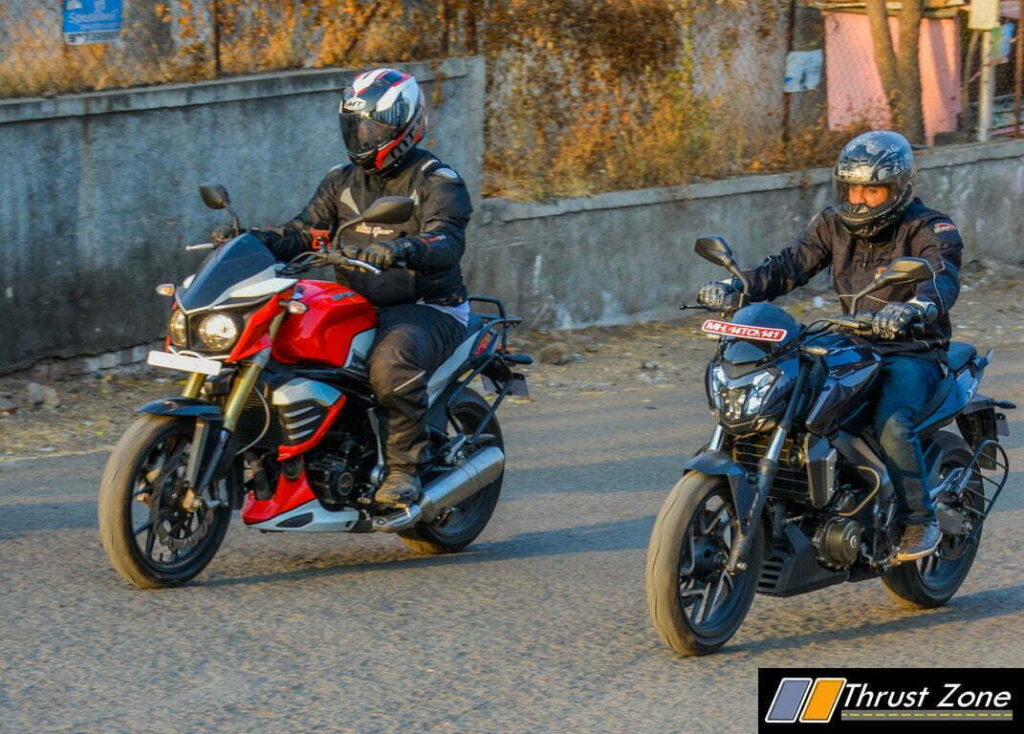 The reason why Dominar 400 is more drama and is also quite exciting to ride is because of the character on the engine. On paper and road results suggest that low to mid-rang acceleration as tested by us is quite similar, post that the Dominar 400 emerges ahead and stays ahead. Mojo does the dash just under 10 seconds, while the Dominar cracks it in mid 8 seconds. The gearbox on the Dominar 400 is equipped with a slipper clutch and clutch is light and so is the gearbox, which is smooth. The same is the case with Mojo despite the slipper clutch is missing.

Dynamically, the Mojo and Dominar are similar in some cases while being completely different in some. Both motorcycles have similar tyres and brake size on both ends. 150 section rear tyre, 110 section front tyre, 320mm front brakes. Tyres on the Mojo has extremely superior than the MRF offered on the Dominar as they Pirelli Corsa II tyres. Mojo also offers petal discs. While Mojo has 240mm disc brake at the rear, the Dominar has 230 mm. Dominar offers ABS, the Mojo doesn’t. Mojo comes up with upside down forks and Dominar 400 comes with normal 43mm telescopic forks. 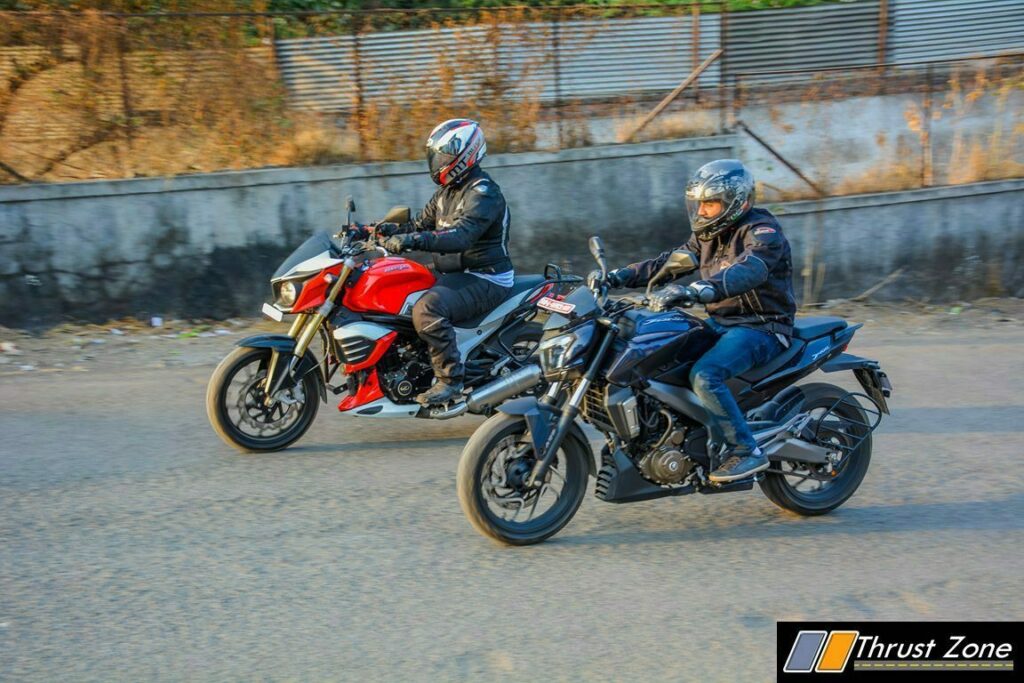 The chassis on the Dominar 400 is a standard and universally acclaimed perimeter frame, while the Mojo uses a frame built in house and that is a twin tube frame. Both motorcycles get gas charged monoshock, while the Mojo has a internal floating piston system, the Dominar on the outside uses a spring on spring dual spring system for better damping to better both comfort and dynamics aspects.

Mojo on the road feels planted, has a excellent ride quality, takes sweepers at high speeds and stays stable. However, it isn’t agile or fun. Going side to side and making rapid movements doesn’t evoke a sense happiness from the Mojo chassis. Dominar 400 on the other is fun to ride, agile in corners, poised in sweepers and turns in quickly when compared to the Mojo. 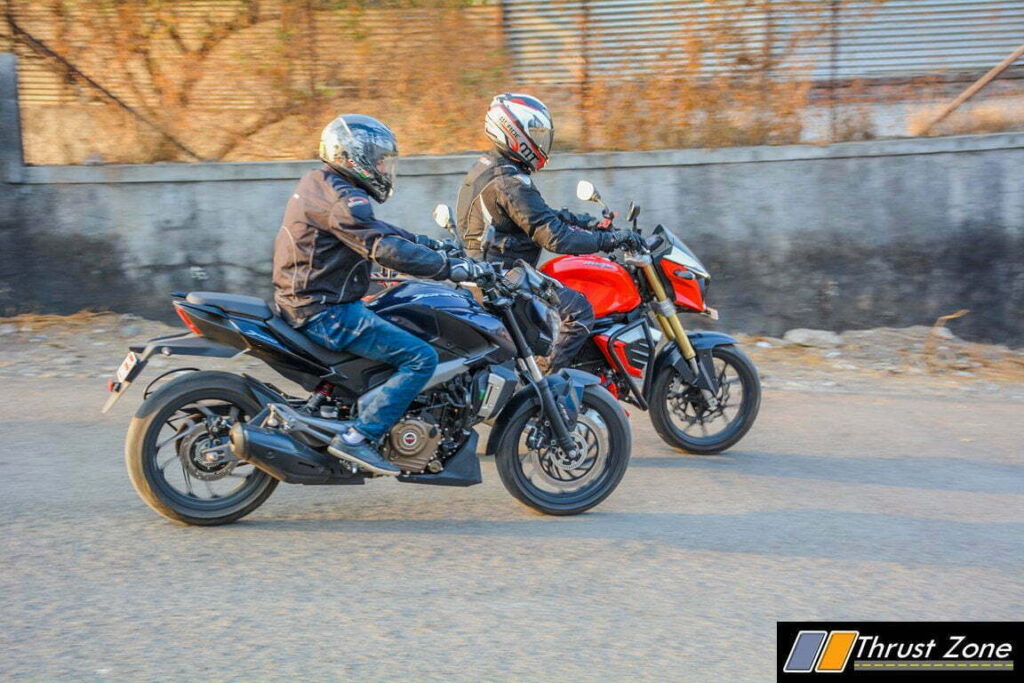 Highway stability is good, the ride quality is stiff at medium speeds, but at low or very high speeds, it irons out everything and provides confidence to the rider and assures stability in all situations. Both bikes have good brakes, but there has been complains from the Mojo brakes as they tend to fade sooner than expected. Dominar 400 excels again with good bite, feedback and extreme amount of progressive power post that. Overall, it is the Dominar which has everything that the Mojo has, but it aces it up with more communicative and fun to ride chassis setup on offer. 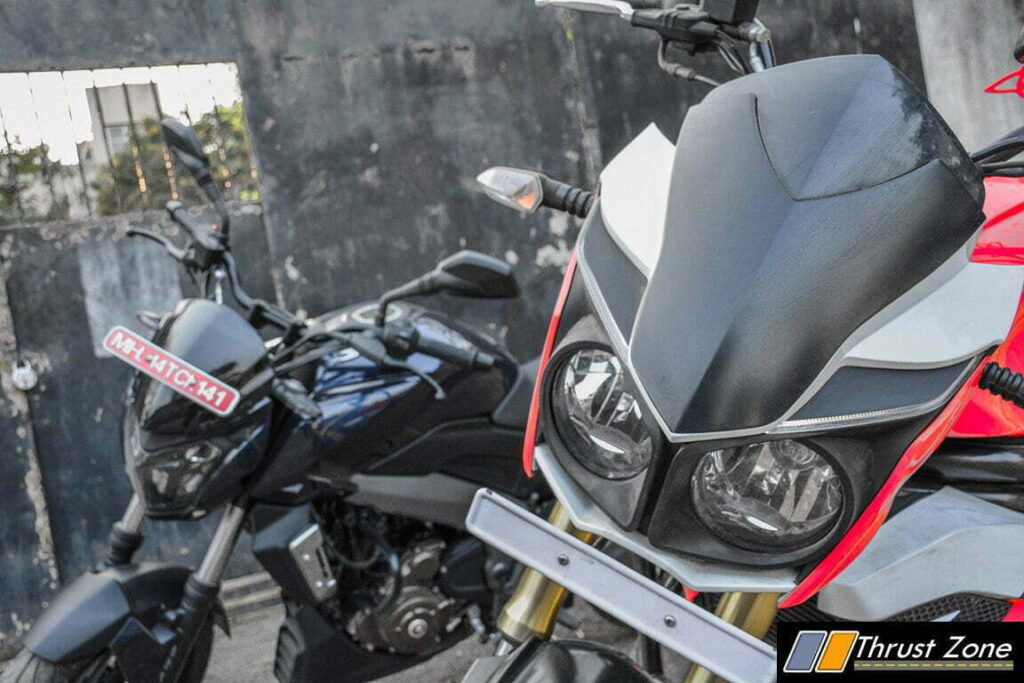 It did not turn out to be what we all expected. The Dominar 400 may be superior in many aspects, but out of the all the major competitors that we have compared with, it is the Mojo that comes quite close to the Dominar 400. Mojo has an imposing stance, offers a larger fuel tank, is not completely behind on performance than the Dominar 400 and is extremely comfortable doing cross border trips. 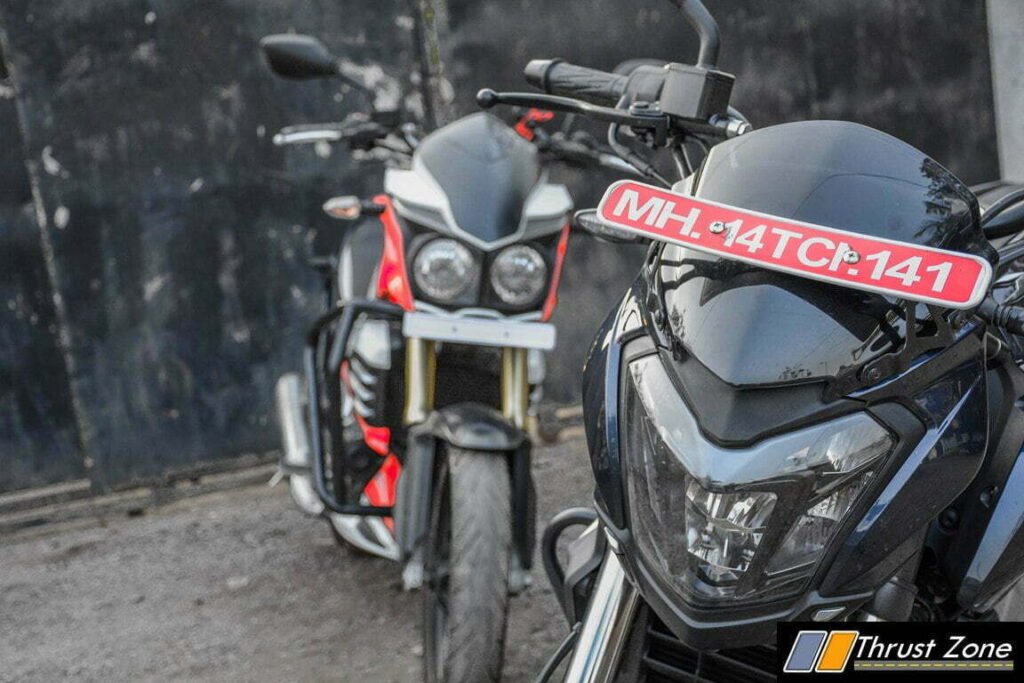 Dominar 400 on the other hands offers more bang for the buck as it offers more performance, dynamics, essentials and safety with ABS for less money. Something that is missing on the Mojo, but that is set to come very soon too. Dominar 400 clearly emerges on the top with its extreme value for money proposition and the versatility that it offers in abundance.

Both prices are ex-showroom Delhi