Mahindra XUV Aero Electric Being Planned to Go Against Rivals Such As Tesla Model X, India launch Could happen in 2018-2019

Mahindra, an Indian car manufacturer, known for its tough SUV’s like Bolero, Scorpio and Thar, has revealed the XUV Aero, a two door SUV-coupe version of the XUV 500, in the Barcelona auto expo in 2016.

The company is also planning to launch an electric version of this car andis also developing a new series of electric engines. Mahindra said that the new electric drivetrain will have increased power and torque as the existing electric motors had a power output of 42bhp. At present, there are two electric motors, a 48V one and a 72V-doing duty in its vehicles

The XUV Aero could be equipped with a 380V electric engine, in development by Mahindra for larger vehicles such as SUVs and MPVs. The car will be built on the same platform as the XUV 500 but with changes in the styling and engine.

The car has been designed by Italian design house Pininfarina, a subsidiary of Mahindra. The concept, with its swooping roofline and suicide doors on one side, was previously equipped with the mHawk engine, with the power increased to 212bhp. But the electric motor can give the Aero a bigger difference to the regular XUV. The electric version would also fit well in the government’s push towards adopting electric vehicles 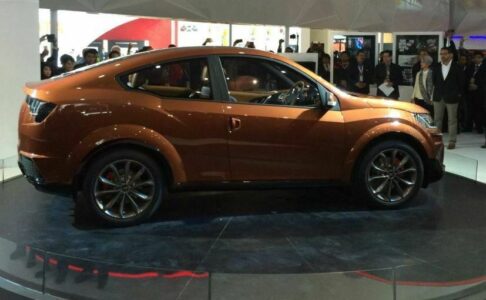 Once confirmed, the Aero electric will receive the highest power and torque.
Price is not yet decided, as this is still a concept. But this will be a plus point for Mahindra as the car looks stunning. We expect Mahindra to launch the car in the near future.

Rolls Royce Sweptail Is The Costliest Car In The World, Could Rake In Over Rs 200 Crore in India If Offered