The Maruti Suzuki Baleno may be all new car from ground up and despite that it needs no introduction. The car has the name from the past and it is already an instant success in the Indian market. The model has created waves in the market as it offers a stylish design, powerful and efficient engines and a stunning price tag to match all of that. The interiors are all new and this new platform offers a lot more to the manufacturer than ever before. The platform is set to churn out more models and make them more efficient and powerful. One such capability this platform gives is making the engines more efficient and powerful as it can receive a hybrid package.

The package includes a larger battery, a new alternator where it saves the power once the brakes are applied. SHVS is also not new to the market. The model was first seen on the Ciaz and Ertiga where it came with the 1.3 diesel and it offered more efficient than before. The fuel efficiency numbers were high and it boosted the sales as the price reduction, aka hybrid concession, which the government gives makes it more popular. Maruti wants to apply the same idea with almost every car that it will introduce in the future. 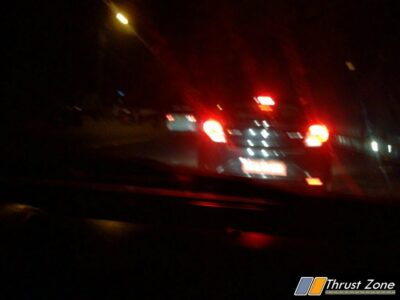 Baleno seems like one such model. Baleno has been spied before and it has been proven that it houses the SHVS engine and not the Booster Jet engine. The Baleno Petrol SHVS is on test in various cities nationwide. We have managed to spot the Baleno testing on the busy streets of Mumbai. The car seen here has rear disc brakes and the testing plates back from home.

1.2 Petrol engine will make around 85 BHP and can deliver OVER 20 km/l when it comes to claiming official claimed numbers. Maruti will pitch the hybrid product as before it did with the Ciaz and Ertiga. We can expect the sales to go higher as prices will go down with government Hybrid concession. Interesting part is that launch for this isn’t on the cards yet. Stay tuned, we will get you more on the same.