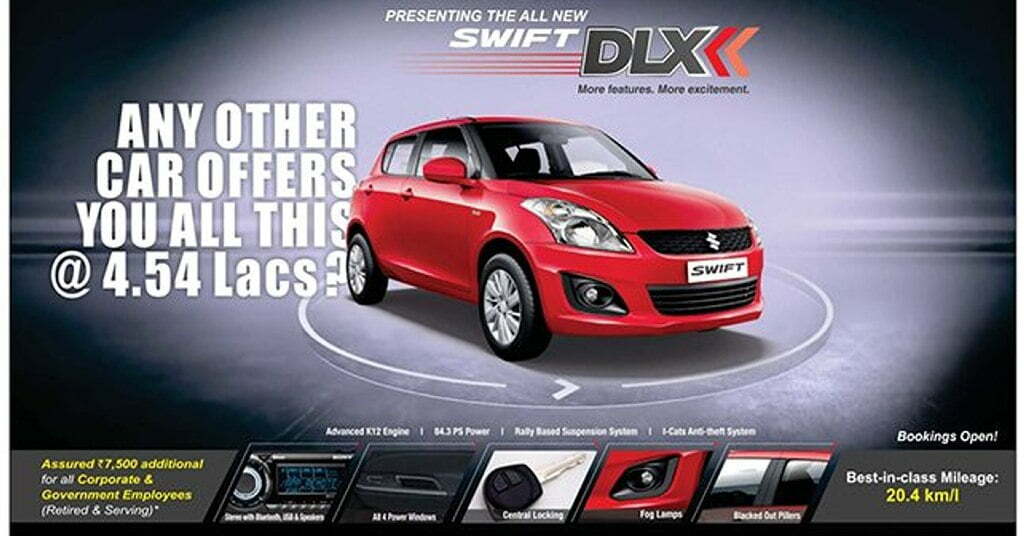 Maruti Suzuki is known for making limited edition for all their models from time to time. The brand then sets to offer more value to its customer as it always does. Either it offers cash discounts, or adds more value to the package by offering more features, new paint schemes, stickers and graphics sets and much more. Interior usually receive new aftermarket head units and revised seat color tones along with leather package for steering and hand brake.

Dealers of Maruti have learned carefully and they are finally offering the same from their end. Once such example is the new DLX version for the Swift. Sales are on the down for the models as before, which isn’t an issue as the numbers are still in the four digit scenario. However, dealer want to make sure it stays as it was before. Vitara Brezza and Baleno have dented sales of Swift siblings and this what is being done to call customers of Delhi region to buy the Swift hatchback for now.

Features that were found in the VXi variant of the car are now also found in this new Maruti Suzuki Swift DLX Limited Edition variant. All of this at a lower price. The features list include connectivity option such as Bluetooth with the full stereo system, all four power windows at the front, central locking, front fog lamps and blacked out B-pillars. Anti-theft system are some of the features available in the new Swift DLX variant.

Maruti Suzuki Swift DLX Limited Edition will be continued to be offered with the similar engine options as before. The 1.2-litre K-Series petrol that makes 84.3 PS of power and 1.3-litre Multijet diesel engine that makes 75 PS of power. The petrol is rated at 20.4 km/l and diesel is rated at 24.4 km/l. Both engines come mated to a 5-speed manual gearbox going to the front wheels.

Hero Ismart 110cc Launched in India, All The Details, Here!