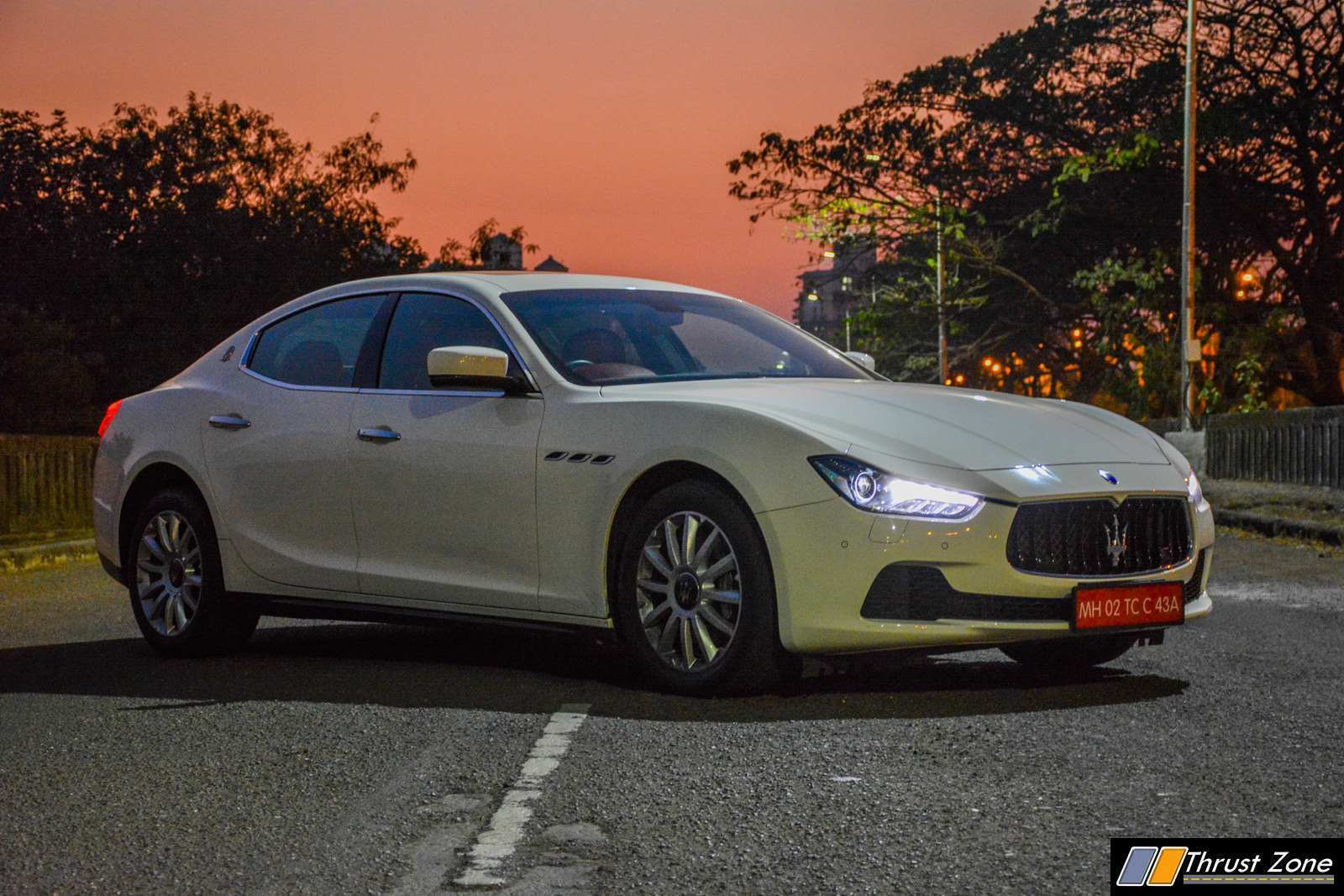 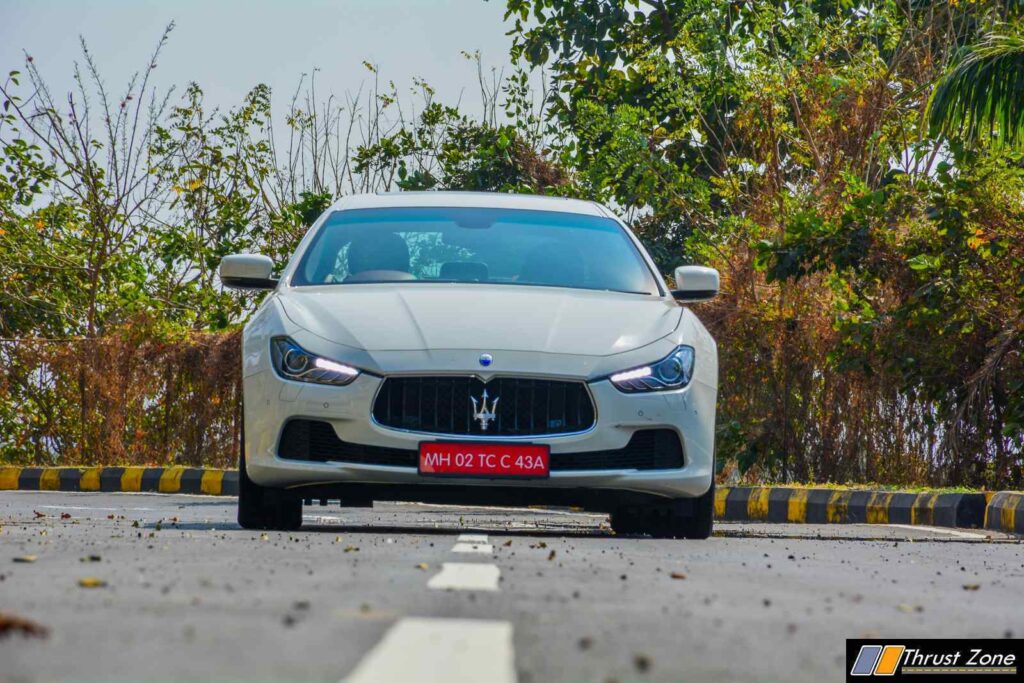 Niche, as a word and a segment in the recent past, is finding deeper rabbit holes. Everybody claims to be one, few achieve it, some aspire it and some are there who are a benchmark in creating and maintaining one. Out of the all the luxury car manufacturers in the market today, it is Maserati apart from all other European luxury manufacturers that has stood out. However, recent times in the world markets have seen cash-strapped brands to take drastic steps. Maserati has taken one but in a manner where it maintains its niche. 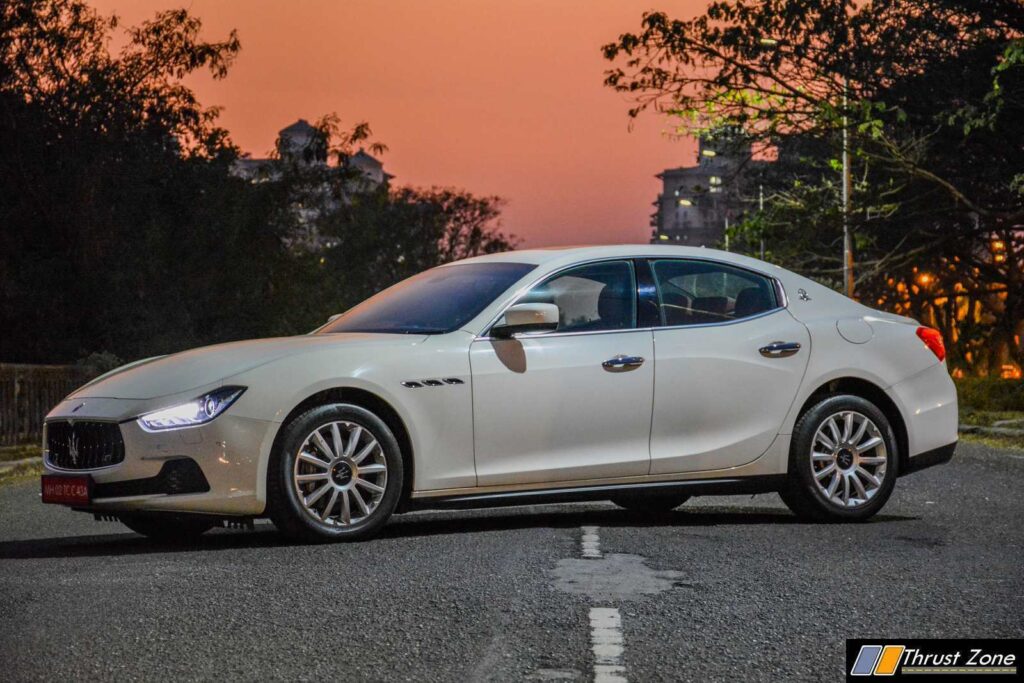 The manufacturer is now offering sedans in all types and sizes apart from its usual flair of two and four-door with 5 seats or less. The Ghibli is the brand new addition to the iconic lineup of saloons that the manufacturer has been making. Maserati is now planning to other segments as well. It is clearly doing it just right by offering the high amount of niche and luxury and yet maintaining its style, its character of being niche, offering limited variants to the audience worldwide and yet making money to sustain the tough life in the tough world markets today. We got a chance to sample the new diesel Ghibli on Indian roads. We spent some quality time with the car to tell you what its like and how this new motor and this Italian manufacturer preserves its attitude, charm and presence on the road. 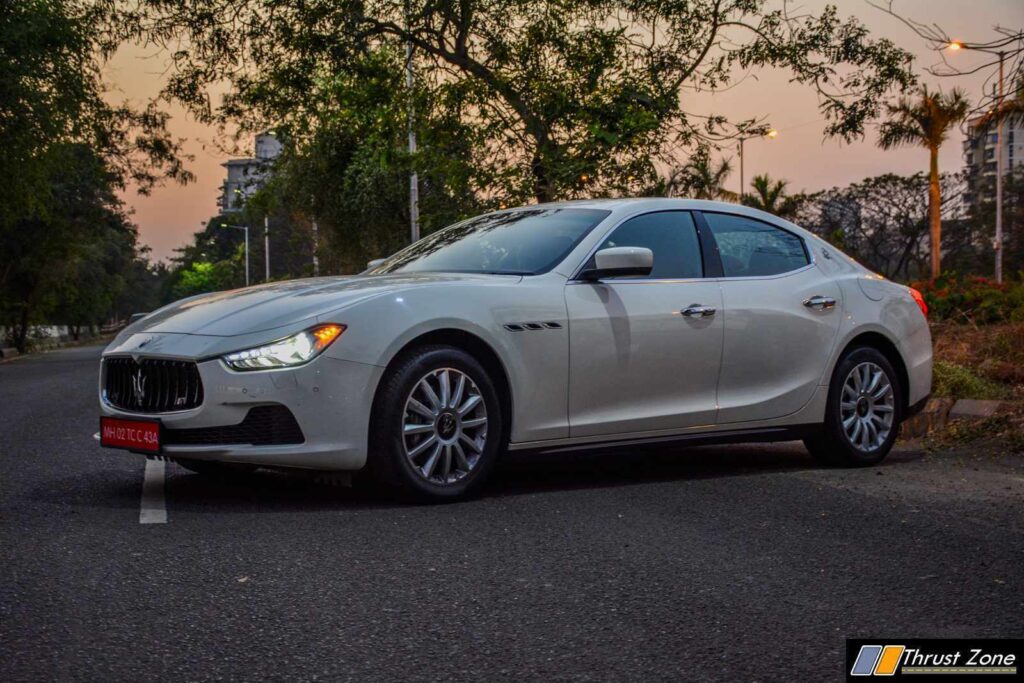 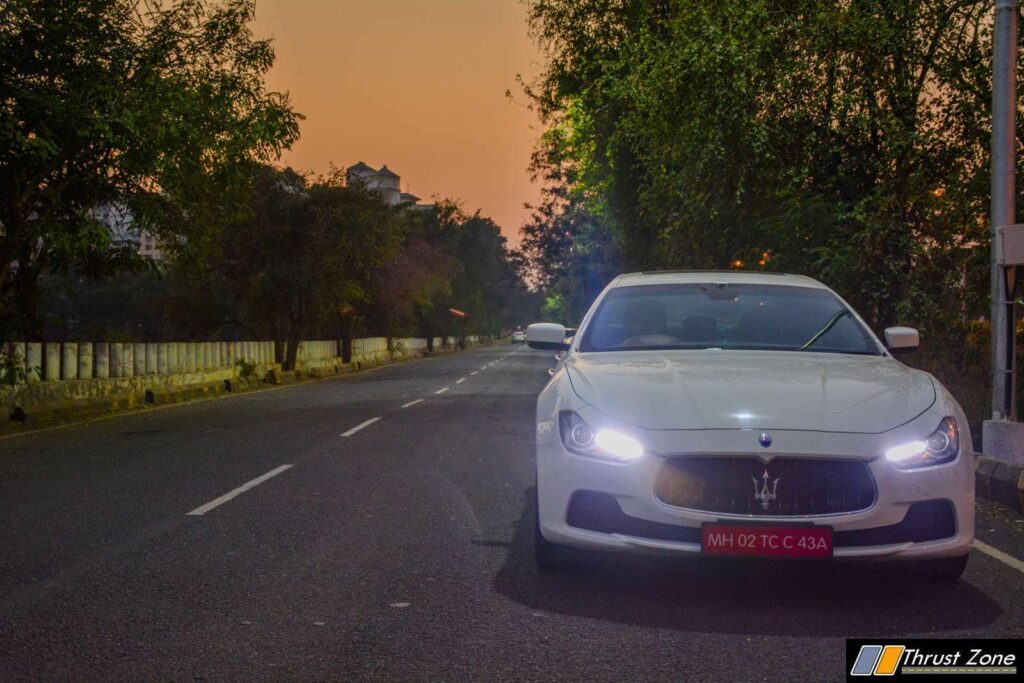 The highlight of the brand is its symbol. Everybody knew this is a Maserati thanks to the resemblance to the logo on the grille and the C-pillar and on the boot which resembles Lord Shiva. Yes, that the aspect of the car was discussed several times by people who questioned us on the road. The overall design continues to be Maserati in every way where it offers coupe-like design for the car with small four doors giving it a distinct look. The extremely low stance of the car, large gaping grille with the same amount of venting in the bumper as well give it a clean and imposing look. 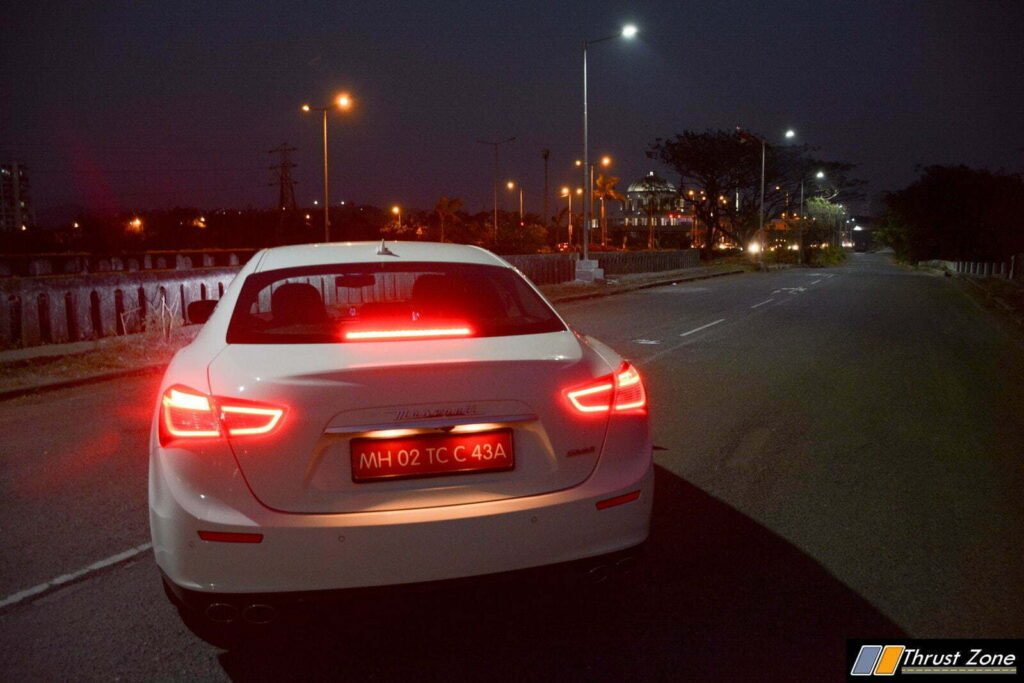 The bonnet is quite high though with respect to the seat positioning is on offer. The rear has a very flush layout with large chunky tail-lamps which have a great LED layout on offer. Side profile has a floating image which is the integration of all elements is certainly done right. Large wheels and slightly old-school design of the wheels is typical Maserati, which can be a hit or a miss. 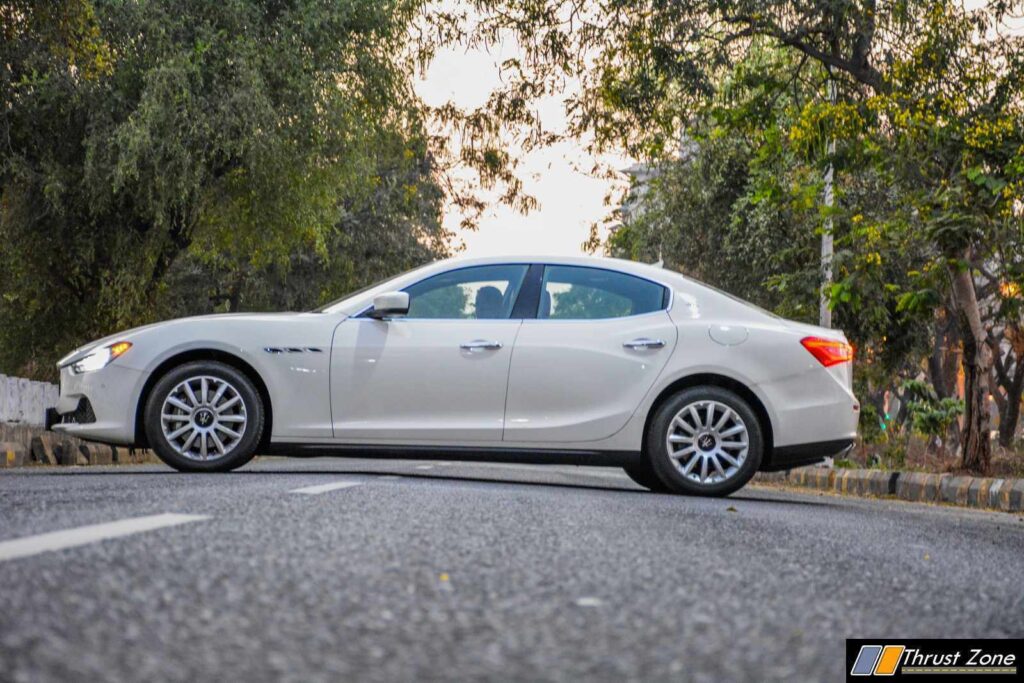 Obviously, the amount of customisation can solve this problem for you. The overall design of the car is very muscular, imposing, old school, the Maserati charm and charisma that attracts a serious amount of attention and helps you stand out. 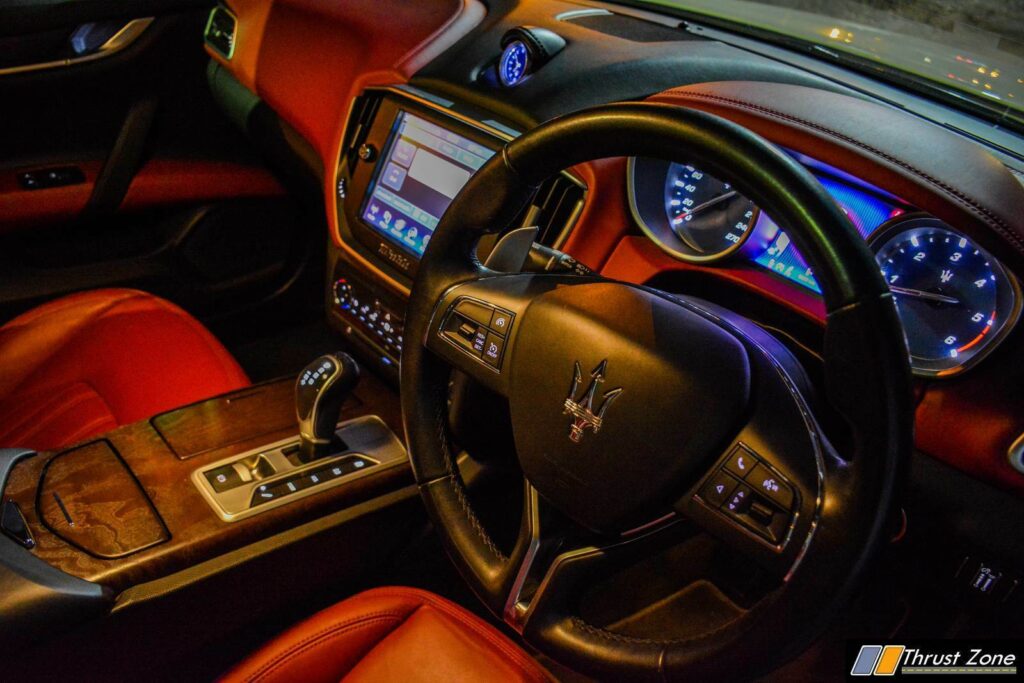 When it comes to interiors, we will just like to conclude immediately, that the cabin is wrapped in leather all around. Our test car with wood, red leather and stitching all around the cabin including all the elements you touch and feel makes the cabin experience first class and luxurious. Wow, we just slipped into aviation tone. Maybe I am sitting in a first class to attend a two-hour meeting, is making me feel that and pen it down too. The steering wheel is large and large trident badge yet again grabs attention. 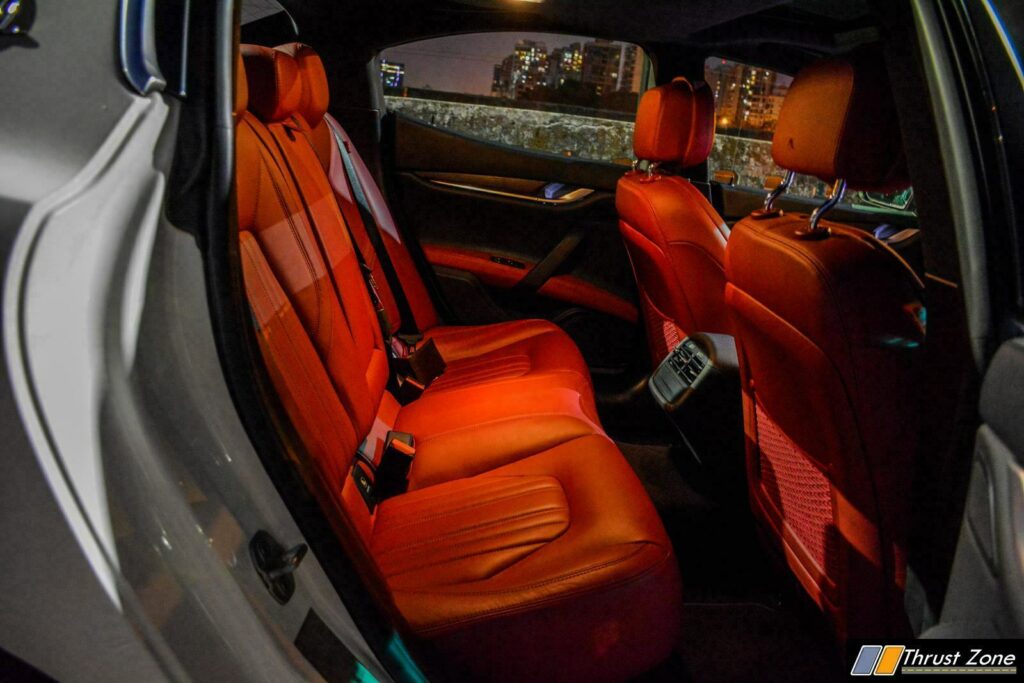 The infotainment system has all the connectivity option, there is climate control that is controlled from below. However, the infotainment system is carried from the FCA group car which was also recently launched in India, robs it the premium look in that area, but those customers never run into each other or go to same showrooms, so that seems alright. Steering mounted controls are quite odd. 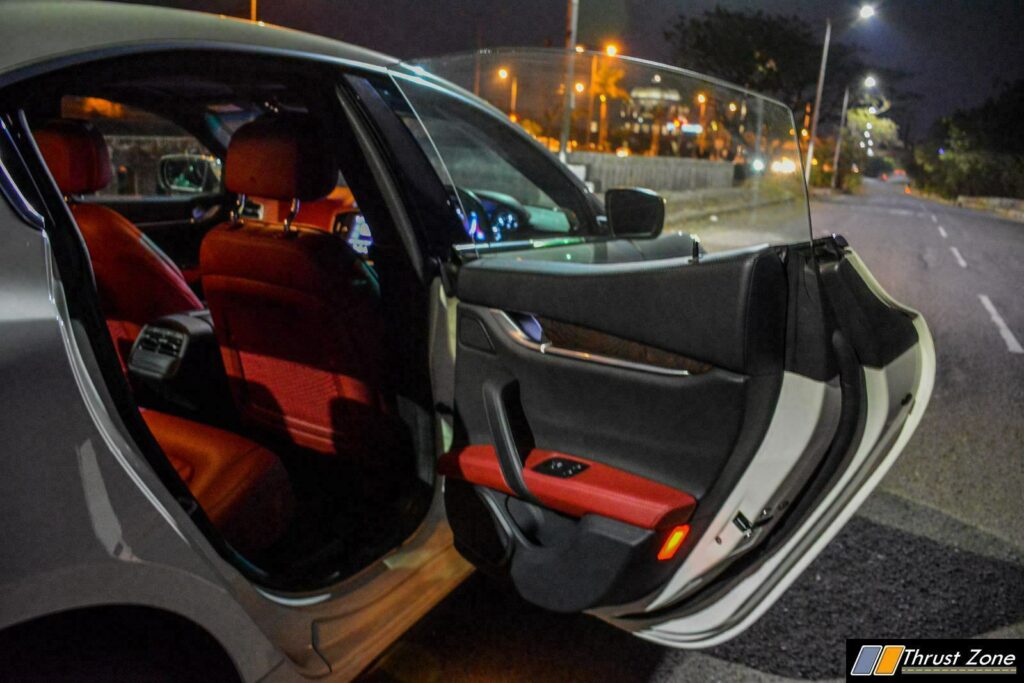 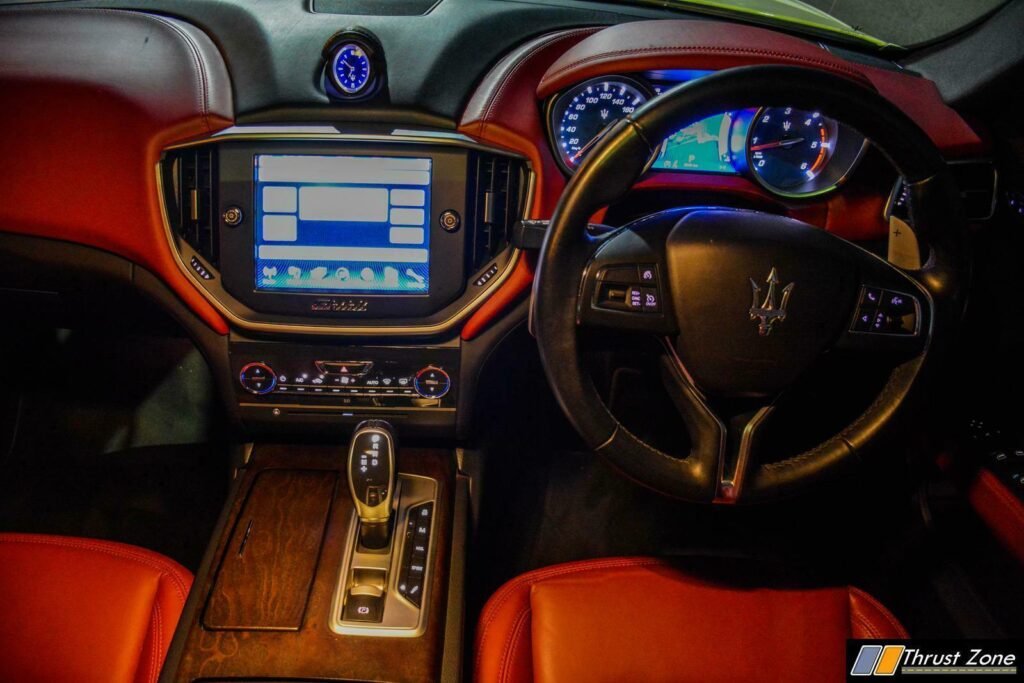 Parking sensors, 360-degree parking camera and safety aids help make it an easy to the car to live with it in the city. Electric seats, Wifi Hotspot, Apple Car Play and Android Auto, TPM, 12 speakers Harmon and Kardon system is on offer when it comes to the feature list. Space in the boot and back is very limited. At this price point, it isn’t great, but it does the job for the weekend trip. Certainly, a full-blown road trip isn’t ideal with this car for four people as the boot space is quite narrow and not deep to accommodate a copious amount of luggage. There is a lot of storage around the cabin which makes it easy on a daily basis. 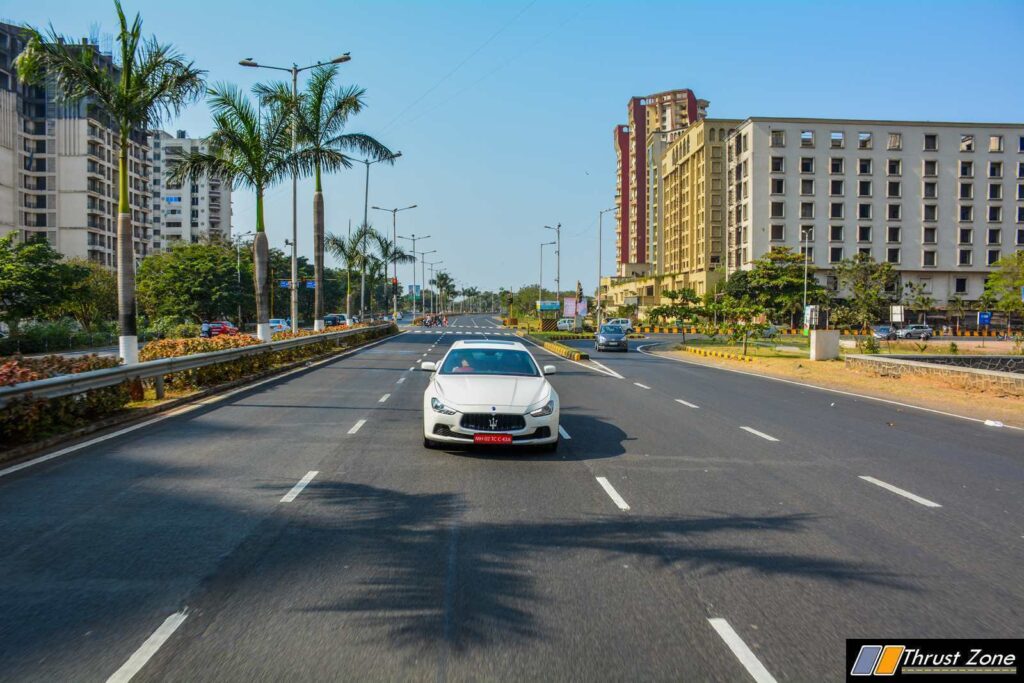 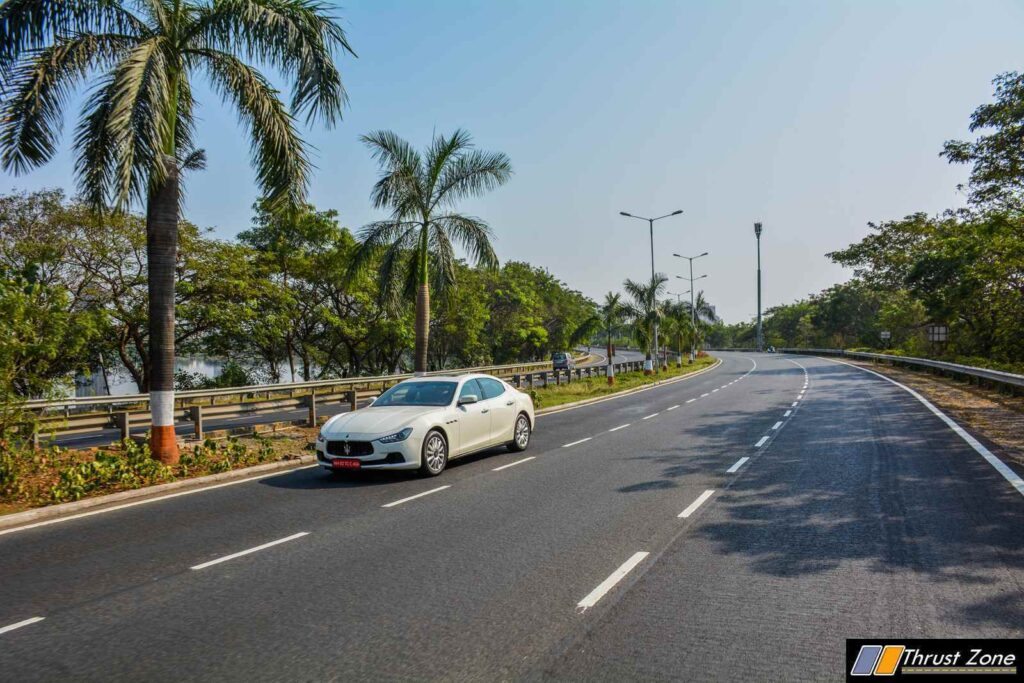 When it comes to performance, as we told you earlier, our test car with the diesel motor. The V6 diesel motor makes 275 BHP of power and 600 Nm of torque from its engine and the car comes with a twin-turbo setup. The Maserati Ghibli is clearly a sports car on the inside and has a body of a saloon. The performance is almost linear and speeds it builds up at intercity highways without any fuss can be an eye-opener. You can probably do 140 km/hr in no time within a 1.5 km of an empty stretch. There is a bit of peakiness in the power delivery and even in the way it brakes. The driving experience makes the driver more focused and gets him more excited. 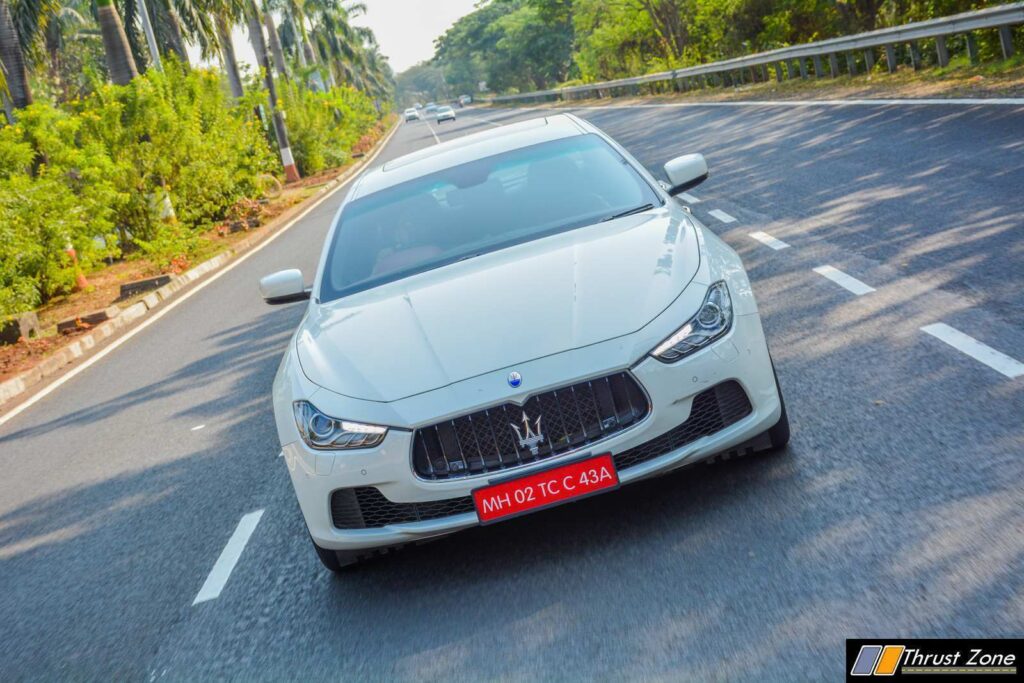 The steering gets heavy and is very communicative but in a slightly artificially way. We say it is the right balance of a focused drivers car in today’s time, done right too!. Give it the expressway which is open and inviting and it reaches the 200 km/hr mark without any fuss. High-speed stability is spot on but there is a mild feel of hariness as speeds twice the amount of illegal speeds. The engine is smooth and refined and the gearbox which is an 8-speed unit attached to it do a good job. Comfort mode dulls thing but sports mode makes your biological mode also turned red and quickness things up. 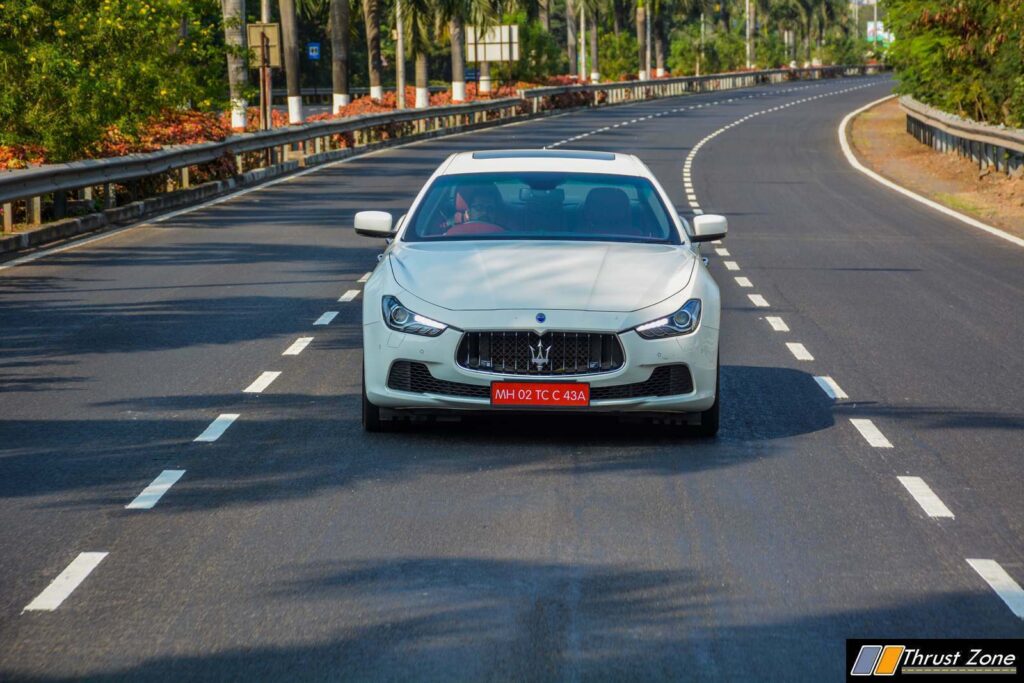 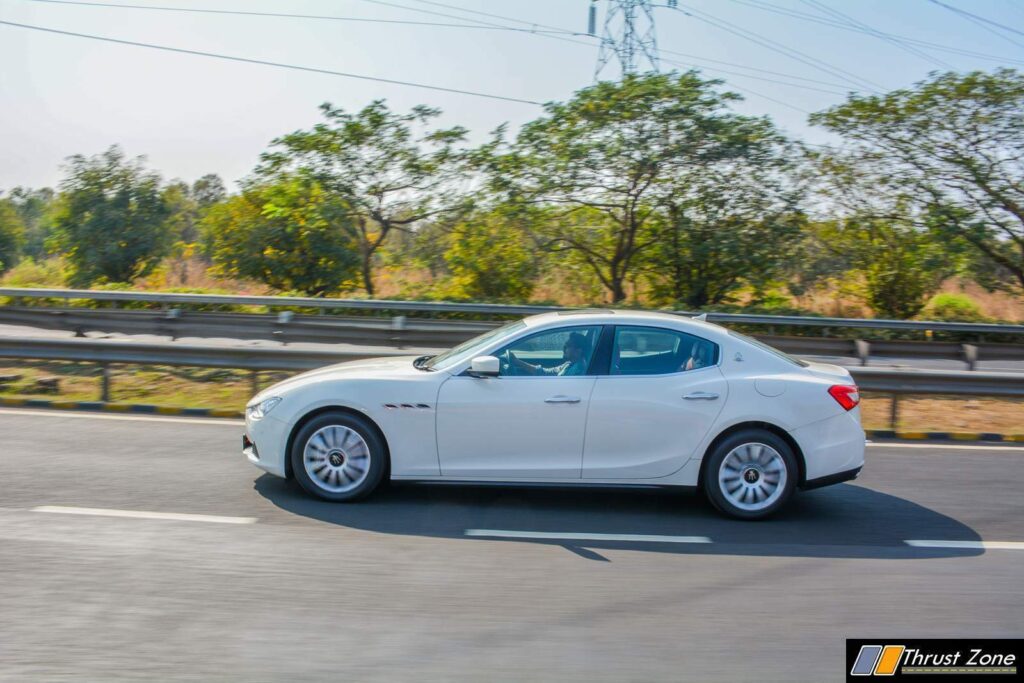 The suspension is well tuned and is on the sportier side and gets the job done in twisties, which is, planting a smile on the face when you feel the highest level of grip from the tyres, the confidence in the way it does it and the speedometer shows the unimaginable speeds at the same time. Something you though cannot be possible. Stability at any speed is spot on and security is further cemented with extremely superior brakes on offer. 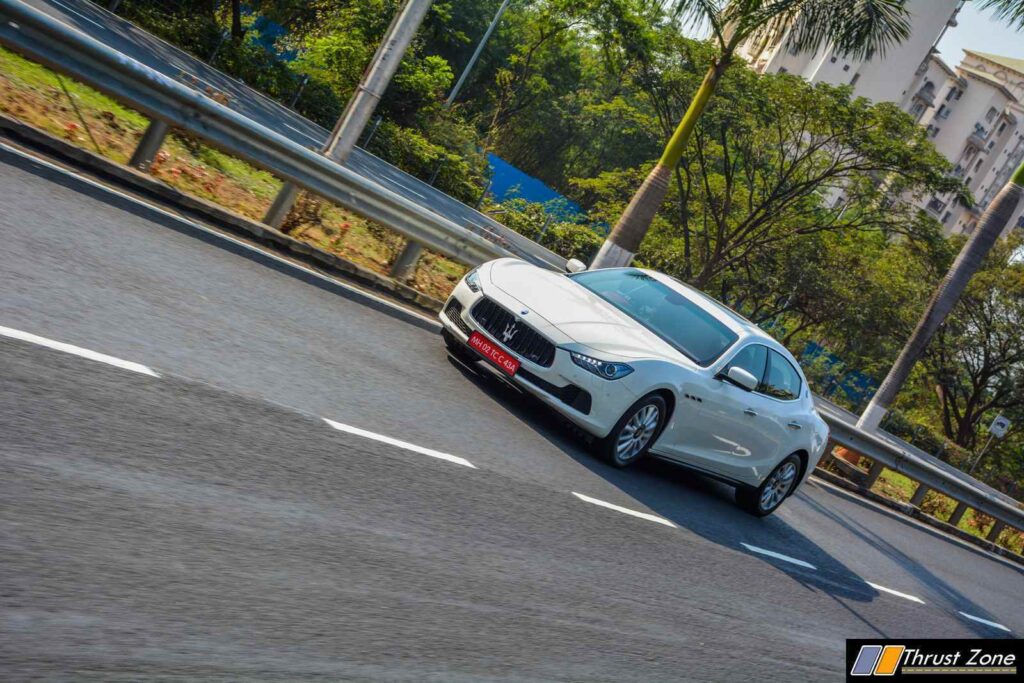 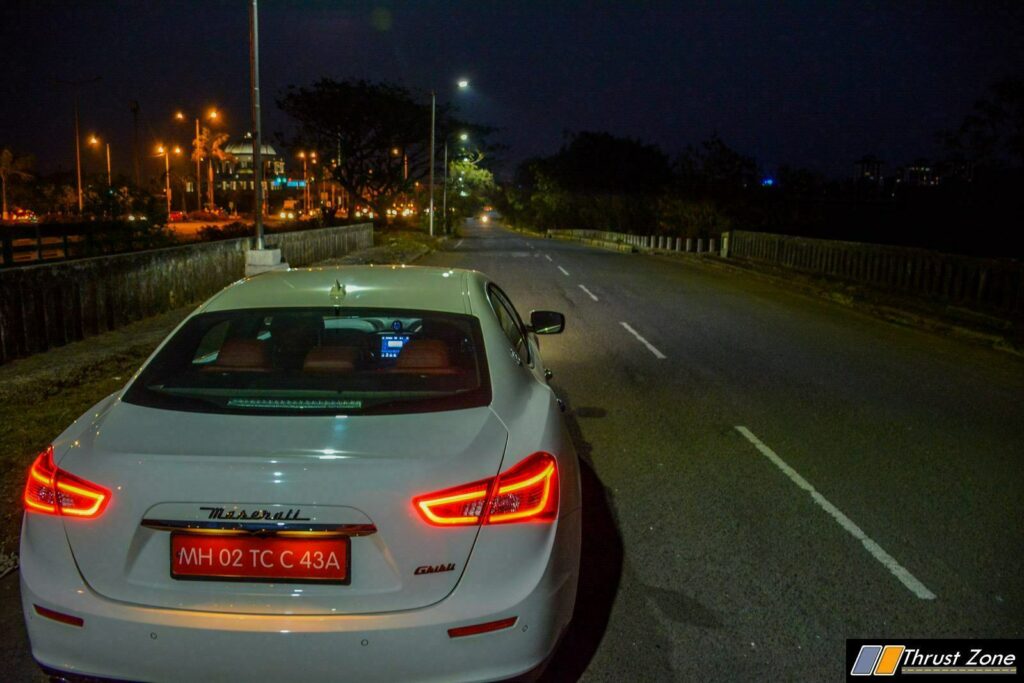 Ghibli is the entry into the brand and clearly, it has all the traits in abundance to stand out and take on the competition to a certain extent. The Indian context is different though. The bit of practicality is missing as the car doesn’t favour the roads entirely and the pricing is on the steeper side. Maserati does say they want to keep their car expensive because customers want that but it has to be a certain extent. 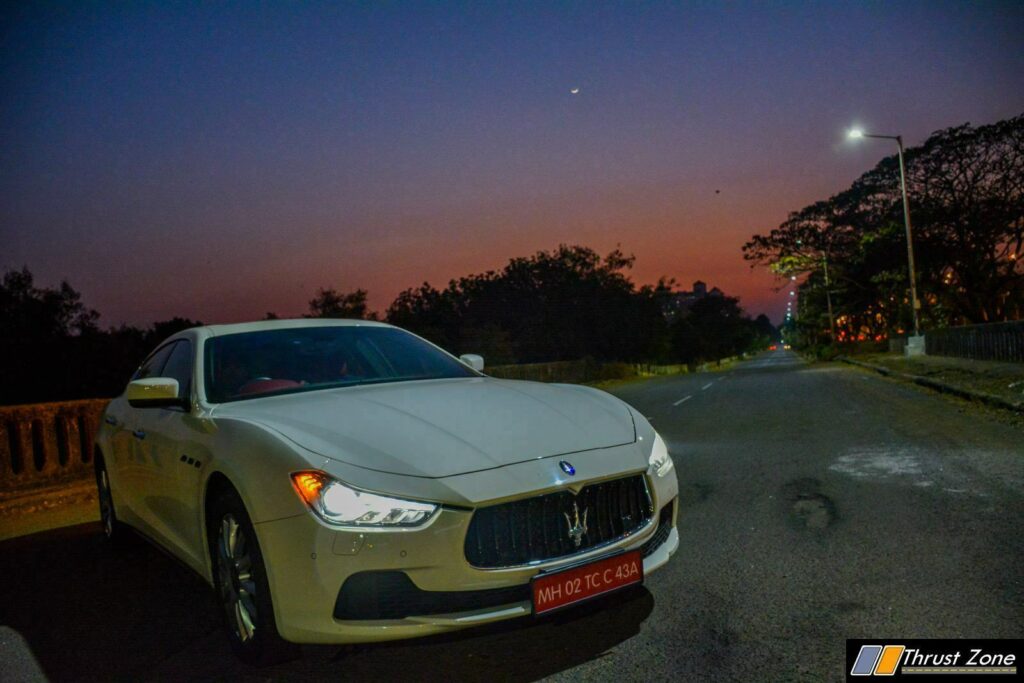 Agreeing to the fact that the driving emotion, the styling and everything is bespoke to the moon and back and that is the reason why the Ghibli can be forgiven for everything and then suddenly it becomes very appealing. That is where you hear your heart and cut that check worth no matter what the amount.